Cell phone selfies aside, many people also want to take actual pictures of something other than their chins when they travel and sometimes good travel photography requires using a tripod. The perfect travel tripod should be lightweight, compact, multi-functional, and sturdy. We hauled around a heavy and bulky tripod for years before we got our hands on a carbon fiber 3 Legged Thing tripod. After more than nine months of use on the road in South America–over the Andes, to the Galapagos Islands, through the deserts of Peru and into the Amazon–here’s our travel gear review of our 3 Legged Thing travel tripodWhat is a 3 Legged Thing?

When we started doing our research about carbon fiber travel tripods with a ball head, we looked into the usual suspects. The Gitzo Traveler is awesome, but at US$1,099 it’s way too expensive for many. The Manfrotto BeFree (US$350) was a possibility, but the ball head that comes with this model seemed a little too wimpy to support a DSLR with a heavy telephoto like my amazing Canon 100-400mm f/4.5-5.6L IS II USM Lens (Buy on Amazon) which weighs nearly 4 lbs. The Benro Travel Angel tripods (US$440) aren’t compact enough.

In the end it came down to two models that seemed pretty similar based on their specs: the MeFOTO Globetrotter (US$399) and the 3 Legged Thing Evolution 3 Brian (US$399, Buy on Amazon – note that this is the newer updated model which is called Albert).

Why did we wind up choosing the 3 Legged Thing? One word: ATTITUDE.

The British company that makes 3 Legged Thing tripods wanted to “bring more personality to the tripod market.” That started with the company’s name (3LT for short) and it extends to the names of their individual tripod models. 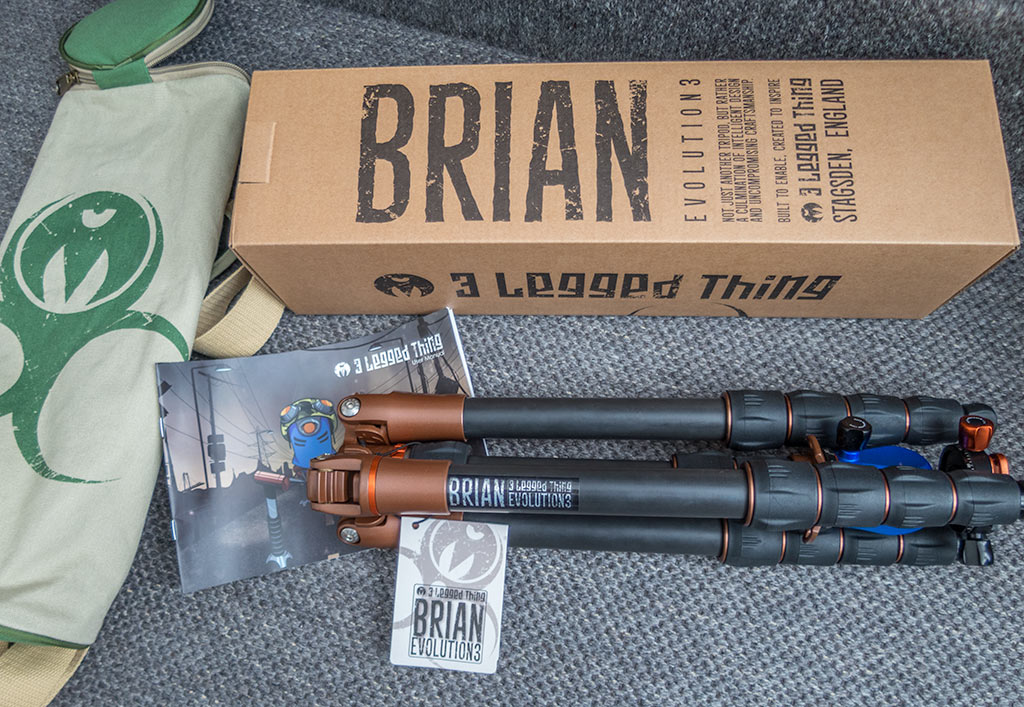 Instead of giving their tripod models a series of mind-numbing numbers for names, they named their original models after famous guitarists. “Who’s going to go into a store and remember a series of numbers?” a 3 Legged Thing spokesperson said to us. Plus, guitarists are cool. We have a Brian, named after Queen lead guitarist (and astrophysicist ??!??!) Brian May. We love Queen!

The company has since introduced new tripod models named after pioneers like Albert Einstein (the Albert replaced our Brian) and Leonardo Di Vinci and they’re about to introduce brand new models in their Punks line of less expensive aluminum tripods.

Just as attitude filled are the names of the replaceable feet for the tripod. Called “footwear,” these feet are sold as accessories for the tripod to be used in a variety of conditions. The standard rubber feet that come with the tripod are called Boots. Pointy metal feet are called Heels and they are perfect for rock and concrete. Longer, javellen-like feet are called Stilettos. And when you need extra grip you’re going to want to put on the Claws. 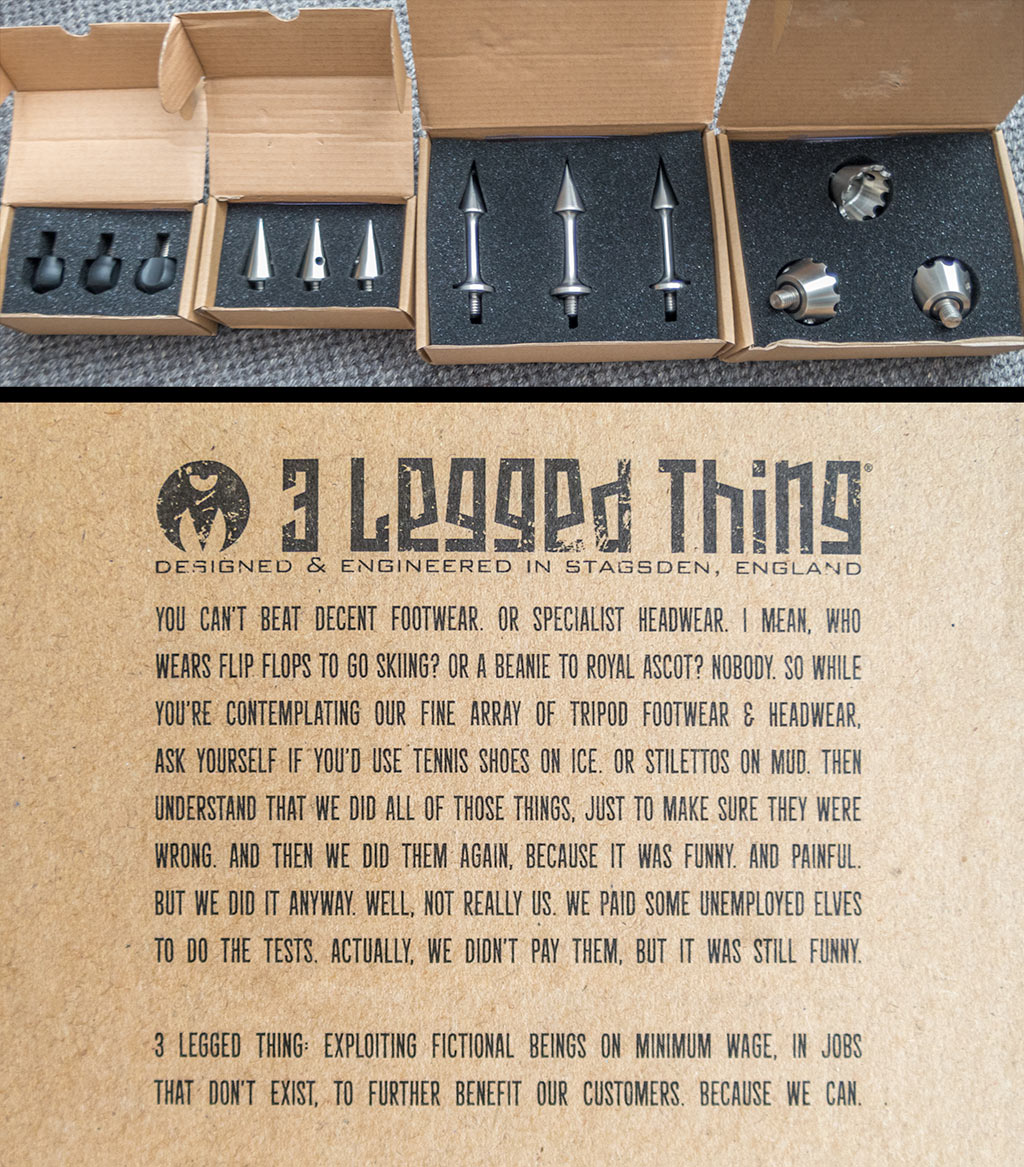 Cool accessories for our Evolution 3 Brian tripod from 3 Legged Thing. As the company says, “you can’t beat decent footwear.” 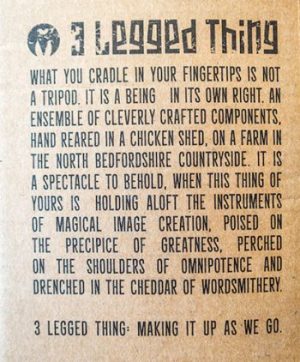 Even the packaging has attitude. The 3 Legged Thing boxes are slathered with ramblings, like the cleverness to the right. The main shipping box was also sealed with tape that said “Punks Never mind the Ballheads” in a typeface that, to our minds, riffed on the ransom-note typeface used on the cover of the Sex Pistols album “Never Mind the Bullocks”. 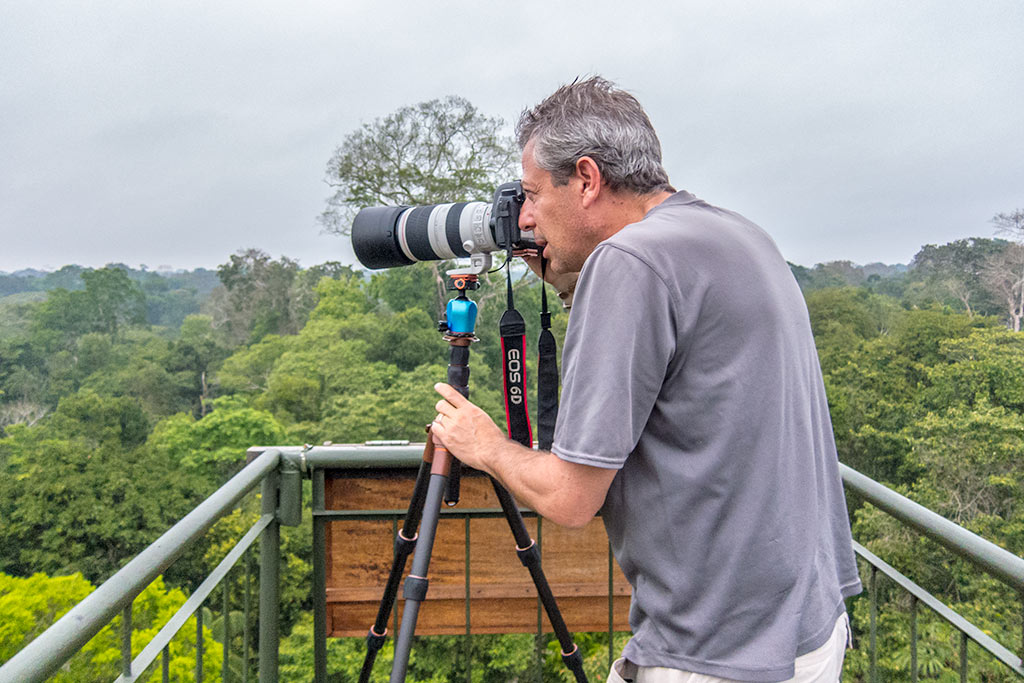 Eric up for daybreak with his Brian on a canopy-top observation tower in the Amazon in Southern Peru.

The real reasons we love our 3 Legged Thing travel tripod 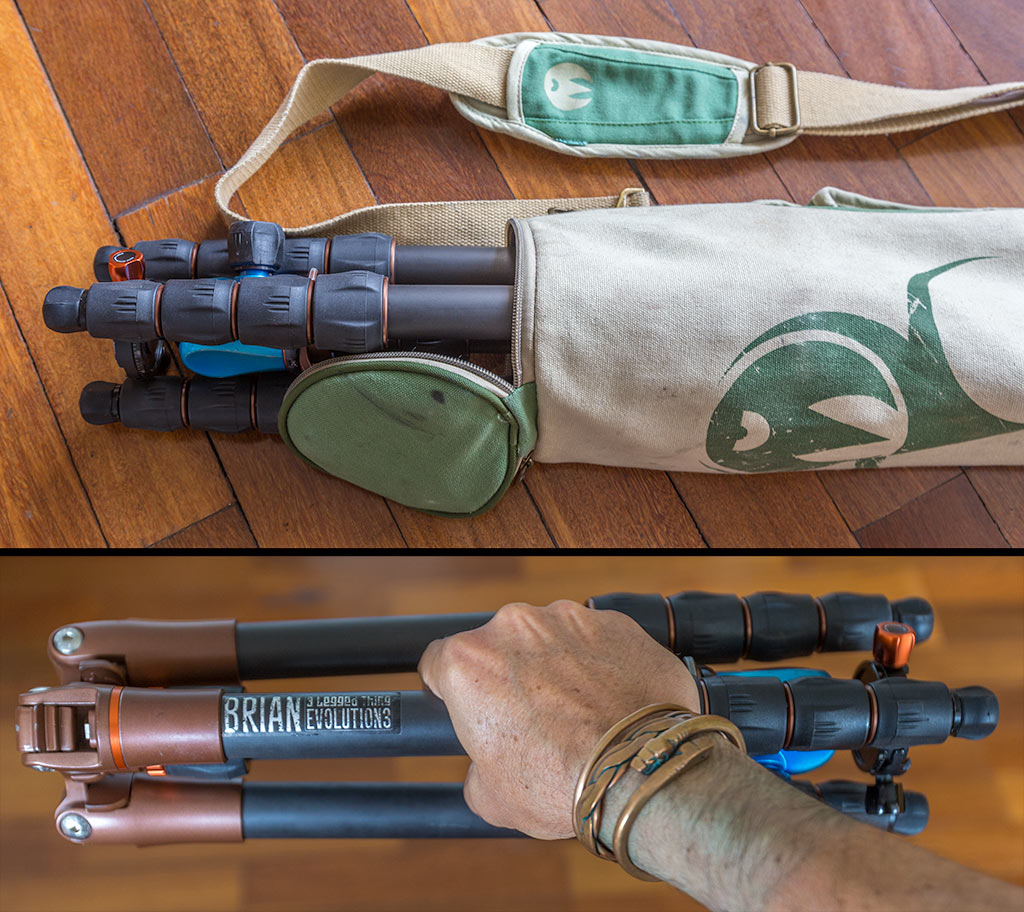 We have some beef with the carrying case (top image), but we love the compactness of our 3 Legged Thing tripod (bottom image). 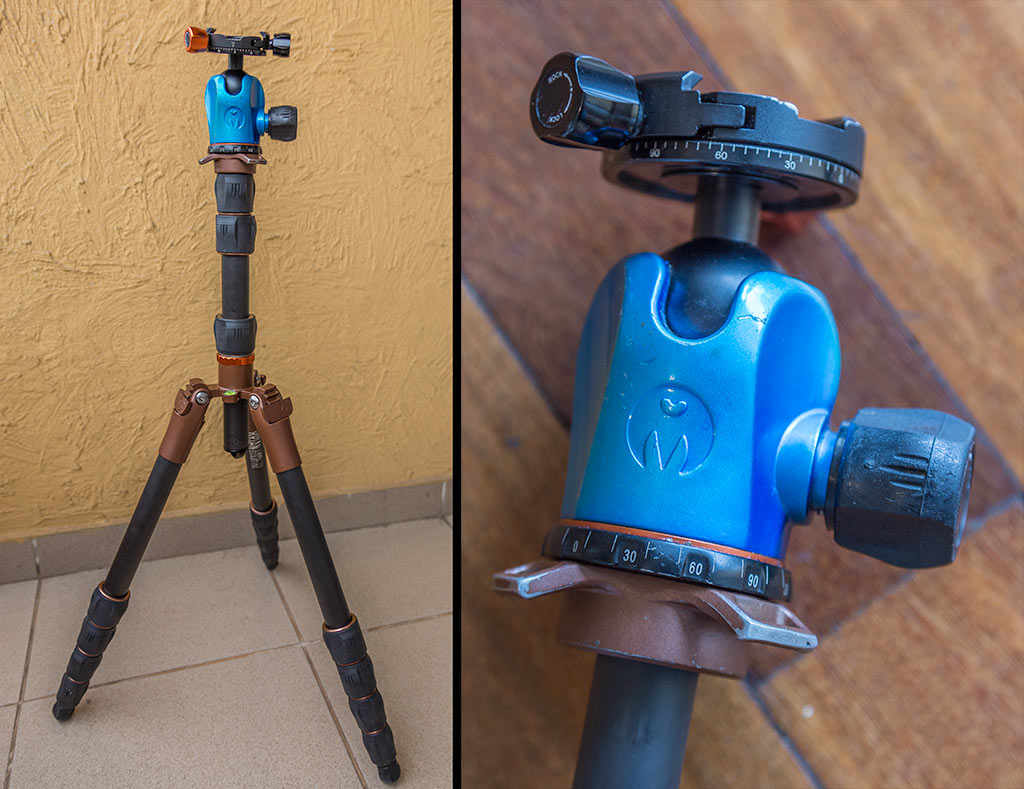 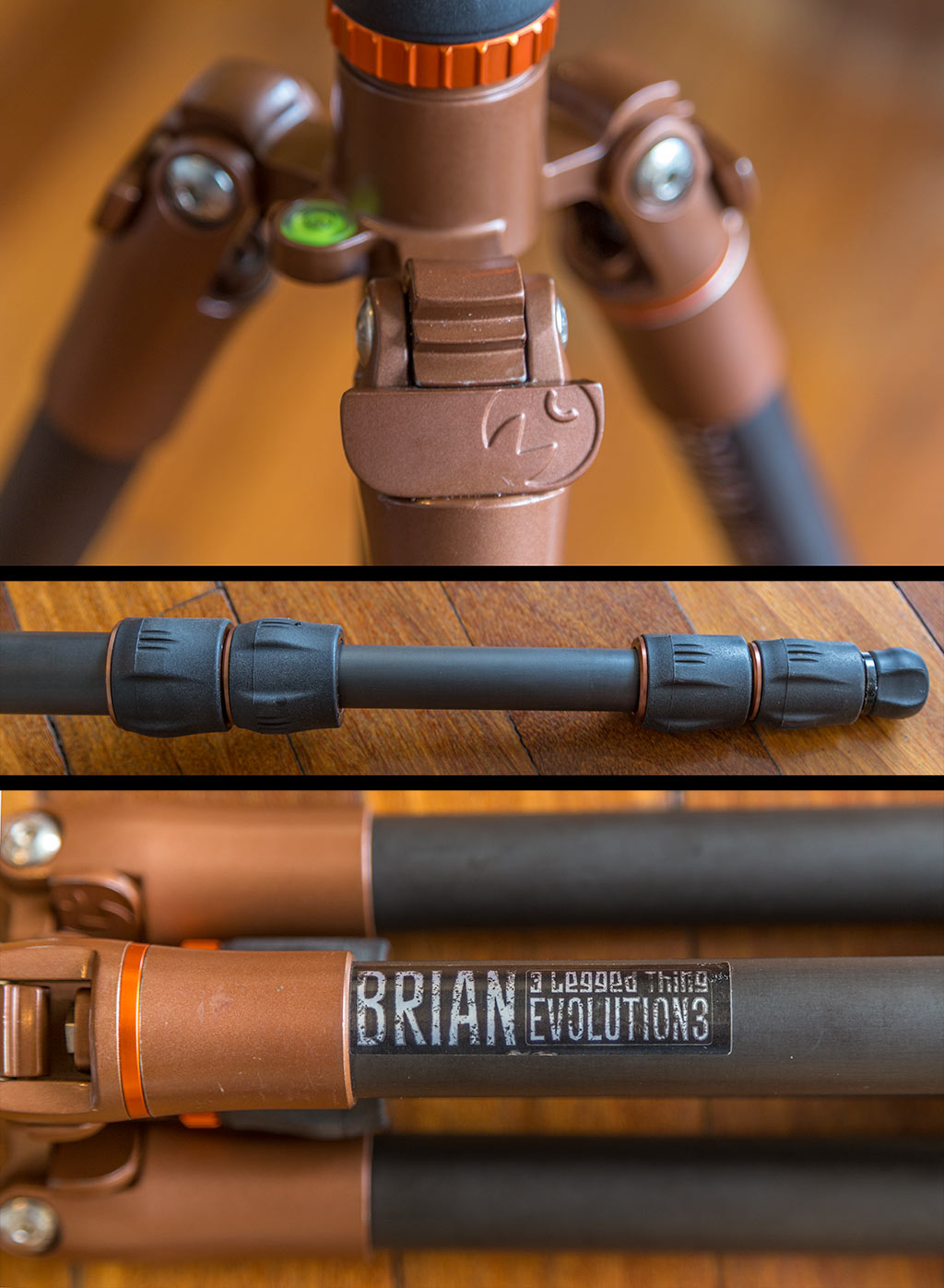 Eric and our 3 Legged Thing tripod at the annual re-building of the only surviving Incan bridge in Peru.

There are a few minuses…

Bottom Line: the 3LT Brian is a light-weight, versatile and easy to use travel tripod. It’s not groundbreaking, since it incorporates nearly all the same features shared by all of the quality carbon fiber travel tripods, but it is extremely well made with nice design and plenty of attitude. 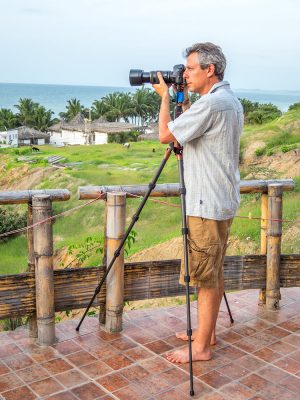 Eric and our 3 Legged Thing tripod in northern Peru.