It was bound to happen. After 30 shockingly smooth border crossings into and out of six different countries we knew our luck at the border couldn’t last forever. Apparently, it couldn’t last until El Salvador where we were met with access denied. The problem actually started many, many months earlier but we didn’t know that as we approached the immigration station at the El Poy border crossing into El Salvador from Honduras. 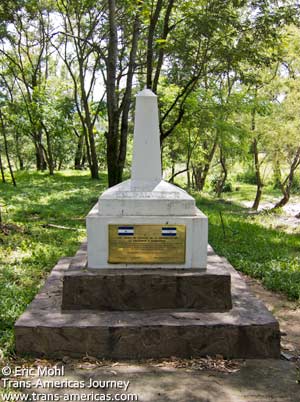 This obelisk marks the border between Honduras and El Salvador at the El Poy crossing. We spent a lot of time with it…

We arrived at the border around 2:30 in the afternoon and we were stopped at a preliminary check point in the brief no-man’s-land between Honduras and El Salvador. There we were asked to hand over our passports. Routine. Then things got weird.

The border agents began examining every entry and exit stamp from Guatemala and Honduras and grilling us about when we entered and exited each country. We’d spent much of the previous seven months traveling through Guatemala and Honduras, entering Guatemala on three separate occasions, so remembering exact dates was difficult. Eventually, the frowning agents took our passports into a building and told us to wait in the truck.

Meanwhile our border sidekick, a wee Scottsman named Tom (a 6’4″ rugby player, traveler, and photographer), sailed through the formalities and was waiting for us on the El Salvador side.

After about 20 minutes a border agent emerged brandishing our passports and telling us to drive forward and park, which we did. Then we were ushered into an office. It’s never good if you end up in an office at a border crossing but that’s where we were. Things quickly got worse when the border boss, a man named Christian Navarro, sat down across the desk from us. With a self-satisfied smile on his face he informed us that we had a problem. We silently re-named him Señor Smug.

Yes, we have a problem

Employing the Central America-4 Border Regulations (CA-4) the agents had counted days  starting from when we most recently entered the CA-4 region during our crossing from Belize into Guatemala in early March which they considered to be the date we first entered the CA-4 region as a whole. According to their math, we’d overstayed our CA-4 allotted time by many months.

We, on the other hand, were under the impression that CA-4 regulations had been dropped for foreigners throughout Central America. There had been no sign or mention of CA-4 in Guatemala or Honduras and in Honduras a border official actually told us CA-4 was dead region-wide. 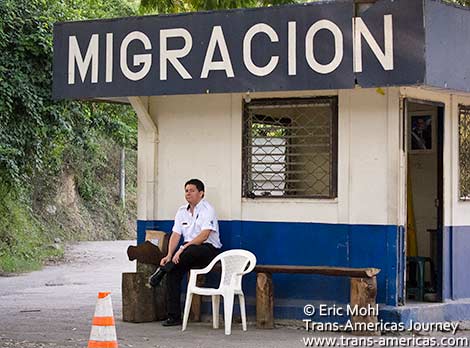 Meet Christian Navarro, the border boss of the El Poy crossing between Honduras and El Salvador.

In 2006 Guatemala, Honduras, Nicaragua, and El Salvador banded together to try and create a kind of mini EU to benefit Central American nations. One of the initiatives was the CA-4 visa regulations which allowed Central American residents to travel freely across Central American borders and granted foreigners a 90 day visa that was good for all four member countries. However, foreigners could not exceed 90 days IN TOTAL in the four participating countries combined.

Why cash-starved nations would want to limit the amount of time (and money) foreigners can spend in their countries is beyond us, but they did it. Yes, visa limits are necessary (no one expects a country to let foreigners stay indefinitely). But asking travelers to spread 90 days (a normal and reasonable amount of time usually given by individual countries) between four different nations is limiting in the extreme.

During our Journey we’ve spent 140 days in Guatemala alone. So how were we then able to enter Honduras? To make an already draconian rule even more confusing and confounding, following the 2009 coup in Honduras that country chose not to apply the CA-4 rule (or was unrecognized by its neighbors), allowing foreign visitors to stay in Honduras as long as they like providing their Honduran visa is valid (you get 90 days automatically at the border), regardless of how much time they’ve already spent in any other CA-4 country.

In this unclear environment we attempted to do our CA-4 homework. To be sure about the border rules in El Salvador we emailed the Tourism Ministry of El Salvador and the El Salvador embassy in Washington DC to ask a host of questions, several times (the subject line in our emails read “URGENT Media questions from journalists entering El Salvador overland in our own vehicle”), but we never got any response from either authority.

There’s such a lack of current information about how and where CA-4 rules are applied that the US State Department warns that “In isolated cases, the lack of clarity in the implementing details of the CA-4 Border Control Agreement has caused temporary inconvenience to travelers.”

That depends on how you define “temporary” and “inconvenience.” 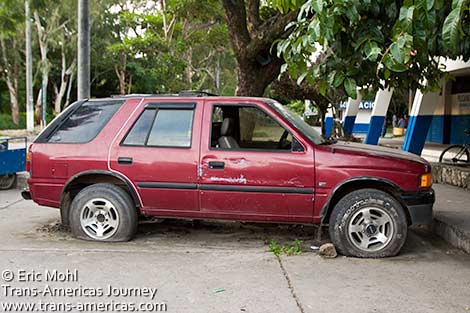 This clearly long-abandoned vehicle was perma-parked in front of the immigration office in El Poy and it seemed a dark premonition of our own fate as we tried to enter El Salvador.

Back at the border, Señor Smug whipped out a highlighted book of border regulations (suspiciously published in 1998, eight years before CA-4 was even created) and informed us that because we’d overstayed our welcome in Central America we would each be required to pay a $114.98 fine and then he could issue us a 5 day transit visa.

This would leave us with three choices.

1. Tour all of El Salvador in five days and continue on to Nicaragua via Honduras. This, for us, would be logistically impossible.

2. Drive through El Salvador and cross back into Honduras at a different border then enter Nicaragua (where we’d likely have a similar CA-4 problem) and into Costa Rica (a non CA-4 nation), then all the way back to El Salvador with a fresh CA-4 visa good for 90 days–a trip of more than 20 hours each way and absolutely not necessary since, geographically, you don’t have to go through El Salvador at all in order to travel south from Honduras.

3. Blow El Salvador off altogether, something we didn’t want to have to do since that would mean failing at our stated goal of visiting ALL 23 countries in the Americas.

Frustrated, we explained to Señor Smug (for the 10th time) that we were sorry that we’d overstayed our 90 days but we were unaware of the rules and our work as travel journalists requires longer stays. We reminded him that we wanted to enter El Salvador in order to publicize tourism in his country. We’re here to help, we said.

It was like talking to a wall. A smiling, finger-wagging wall.

Our contacts in El Salvador are few but we walked back into Honduras to buy air time for our cell phone and then we called them all. María José Rendón, the director of marketing at the El Salvador Ministry of Tourism, said there was nothing she could do. Miguel from Suchitoto Tours said he’d make some calls. And Rodrigo at Eco Experiences El Salvador generously offered to make a few phone calls as well. However, it was nearly 5 pm. Phone calls were going to have to wait until the morning, and so were we.

Instead of spending the night in Los Almendros de San Lorenzo in Suchitoto (one of the best hotels in El Salvador and one we’d been assigned to write about) we spent the night in the cramped front seats of our truck parked along a dusty, noisy stretch of no-man’s-land.

Sunrise at 5 am would have woken us up, but that would have required sleeping in the first place which didn’t really happen in the not-so-comfortable-for-sleeping front seats of our truck (our ever-loyal giant wee Scottsman “slept” on the roof of our cargo box).

By 9 am phones were blazing and Rodrigo and his super-helpful colleague Cecilia eventually reached the head of El Salvador’s Immigration Department and pleaded our case to him. He agreed to look at faxed copies of our passports and Guatemalan and Honduran entry/exit stamps.

At this news our spirits rose. Maybe there was hope yet. El Salvador seems to be attempting to increase its pathetic tourism numbers–the country is such a non-destination that Lonely Planet no longer publishes an El Salvador guidebook. Maybe this immigration official would recognize the benefit in finding a way to get working travel journalists into his country.

Around one in the afternoon–nearly 23 hours after the whole border problem started–we were told that even though the head of immigration could have authorized a special dispensation in our case, he had refused to do so.

We could, we were reminded, still pay $114 each for a five day visa! We agree that we (unknowingly) broke CA-4 visa regulations and stayed too long in Central America. And we agree that El Salvador had the right to uphold the regulation and impose a fine. But, as we’d already pointed out, offering us just five days instead of a fresh 90 day CA-4 visa once that fine is paid is not a solution. It’s a hostage crisis.

So we bid farewell to the wee Scottsman (who had remained by our side all this time) and watched him walk into El Salvador with no small amount of jealousy. Then we turned our truck around.

Back on the Honduran side of the border folks were surprised to see us again so soon but not surprised that we’d had trouble getting into El Salvador. When we explained what happened the Honduran immigration agent shook his head knowingly, as if to imply that everything that happens in El Salvador is crazy. “You are always welcome in Honduras,” he said with a slightly self-righteous smile.

Then again, these two countries don’t necessarily play nice together. In 1969 they had a violent altercation (at least 1,000 died) called The Football War and, yes, it was sparked by a soccer game…

Once back in Honduras we also had to buy a new US$40 importation certificate for our truck (so our border trouble wrecked our budget as well as our plans) but at least we had a country to call our own. In total this failed venture cost us around US$200 in phone calls, border fees and gas. 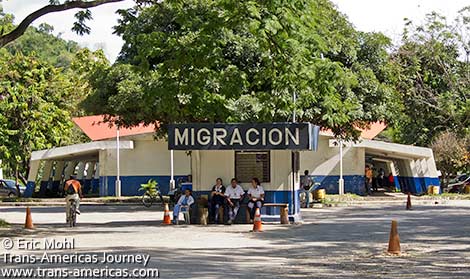 Our no-man’s land home for nearly 24 hours as we tried to enter El Salvador. Thankfully, as borders go, this one was slightly less dusty, trash-filled, and heinous than most.

Obviously, the 90 day CA-4 cap is no problem for short-term vacationers. For long-term travelers like us, however, it’s a big, big problem which needs to be take into consideration when planning your route.

Anyone traveling long-term overland is in an even more difficult situation since CA-4 seems to be largely ignored at airports but strictly enforced overland. Señor Smug even suggested that we should fly into El Salvador and get a new 90 day visa upon landing, but the Journey is a road trip so this work-around was not an option for us.

And don’t assume that Honduras will keep ignoring CA-4. The regulation is still on the books and could be upheld at any time.

Getting current information about entry/exit rules is difficult (lack of information was a big part of the reason we ended up in this mess in the first place). We suggest talking to someone in the nearest embassy for the Central American countries you want to visit before leaving home.

And, yes, we did finally get into El Salvador, which we loved.