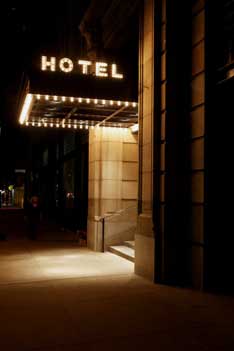 My room at the Ace Hotel has an opinion. The mirror reminds you that “Love is meant to make us glad.” The record player (yes, record player) demands “Rock out” and the bedding says “Thanks for sleeping with me.” In fact, the entire hotel has a proud and loud POV that proclaims ‘I’m different and so are you so come on in!”

And they do. The lobby is perpetually packed with in and out of town  trend setters and early adopters tapping away on laptops (and, increasingly, iPads) and sipping brews from the Stumptown Coffee shop off the lobby. Hotel guest and neighborhood drop-ins mill about and look almost as cool as the lumberjack hipster staffers in their intentionally off-kilter plaids and school-marmy glasses.

The hotel offers two noteworthy restaurants including The Breslin (a meat-centric indulgorama from the creators of NYC’s Spotted Pig) which received a coveted Michelin Star in October. There’s also the John Dory Oyster Bar, a shellfish temple with the look of a white-tiled fish mongers turned into an aquarium for people. Do yourself a favor and let the talented bar tenders blow your mind with a gourmet cocktail that’s all about ingredients and ingenuity, not bells and whistles.

The Liberty Hall club in the basement of the hotel presents another reason to stay up late with the likes of Beyonce and Jay-Z who recently turned up to check it out. 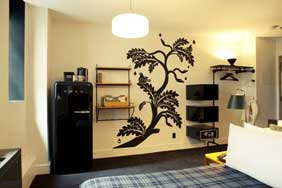 Luckily there are 260 rooms upstairs to rest up in. Ace Hotel room descriptions read a bit  like In n Out Burger menus with rooms coming in small, medium, medium medium (that’s a medium with two double beds), large, loft, cheap and bunk.

The look and feel of the rooms is an appealing mix of low tech (pencil sharpener) and high tech (flat screen TV).

Custom-made furniture and fittings include an open clothes rack made from bent plumbing pipes, vintage lamps and other office fittings complement an unexpected mix of patterns and fabrics that feel tossed on, but oh so well. The overall ethos seems to be industrichic—as if you were crashing for a few days in the office of a construction site foreman who reads Wallpaper.

Original art work painted directly on the walls, wood floors, an Italian SMEG refrigerator (the in-room amenity du jour) fully stocked with designer beverages and some low-rent standbys (a mini keg of Heineken is $30, for example) and a magnetic do-not-disturb sign that reads “Now” and “Not Now” round out the playful/play with me décor. 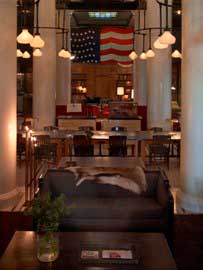 The Ace New York City is part of a small chain that started in Seattle and expanded to Portland, NYC and then Palm Springs. The NYC hotel is in a building that was home to the 12 story Breslin Hotel, an SRO (single room only) establishment. Vestiges of that past go deeper than the architectural details—some floors still have rooms occupied by SRO tenants who were unwilling to move out just because their affordable housing was being turned into a design-driven hotel.

The design firm that created the found-object, mix-and-match style of the hotel has also worked on the homes of Gwyneth Paltrow and Kate Hudson and the newly-minted hotel is in a newly-minted New York City neighborhood known as Nomad. If you have to ask what that acronym stands for, you’re probably not right for the Ace.