Some tours are so hyped it’s suspicious. Can they really be as good as the chatter about them claims? In the case of Actun Tunichil Muknal (ATM) cave in Belize the answer is yes. Ancient Mayan culture, ceremonies, and superstitions, human remains, a virtually unpronounceable name, narrow water-filled passages, and more await adventure travelers. 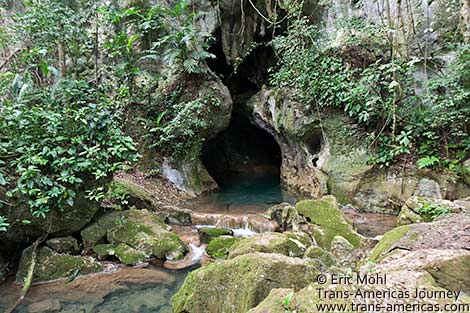 The mouth of the culturally and geologically dramatic Actun Tunichil Muknal (ATM) cave in Belize.

It all starts out reasonably enough. After an early morning start with your tour operator in San Ignacio and a bumpy 45 minute ride you hike along a mellow, flat, scenic, and mostly-shaded trail through the jungle for about 30 minutes until you reach the mouth of the cave. More precisely, you reach a rudimentary camping area at the mouth of the cave (tour companies offer an overnight trip to the cave with camping here) where you scarf down some lunch before entering the cave which is a place the Mayan considered both terrifying and powerful.

The mouth of the cave is beautiful, like a mysterious indoor/outdoor pool. The whole cave system is filled with crystal-clear water and the deepest section on the tour is right at the beginning. The only way in is to swim. Once inside it was nice to discover that the ATM cave doesn’t suffer from a gross bat guano smell. 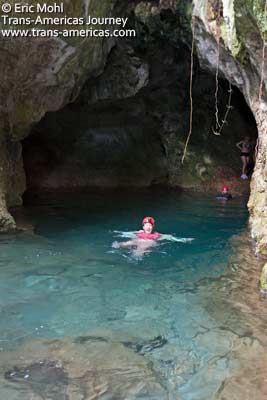 Karen swimming into the mouth of the Actun Tunichil Muknal (ATM) cave in Belize.

After the initial swim the water never gets much more than knee deep but the trail through the cave is wet and rocky the entire way as you slowly move deeper into what the Mayans called xibalba, or the underworld. This is where they believed the dead went before working their way back up through various levels to reach a better place.

Xibalba was both feared and revered. Archaeologists believe that only a select few of the living Mayans ever entered caves and they did so only when necessary to perform rituals and ceremonies designed to solve problems. The bigger the problem, the deeper they went into the underworld. 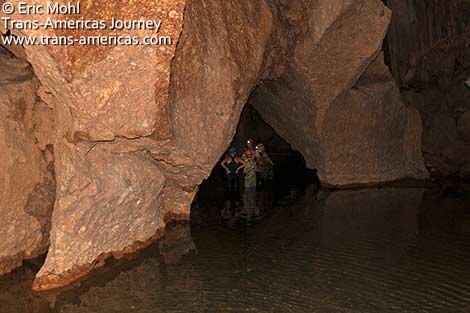 The entire route through the Actun Tunichil Muknal (ATM) cave in Belize is covered in crystal clear water–from ankle-deep to many feet deep.

Mayan ceremonial sites inside the ATM cave (and other ceremonial caves) exist on natural shelves in the interior cave system. Here the Mayans built fires, burned incense, and lit torches which cast shadows in the shapes of various gods (some carved out of natural stone pillars in the cave). They also brought in special ceremonial pots.

At the end of the ceremony, each pot was ruined in some way–cracked or punctured with what’s called a “kill hole” to release its inner spirit and render the vessel useless. The deeper we traveled into the ATM cave the more we could relate to the feelings of power and mystery that must have lead the Mayans to believe that they could talk to their gods here.  It really was like entering another world. 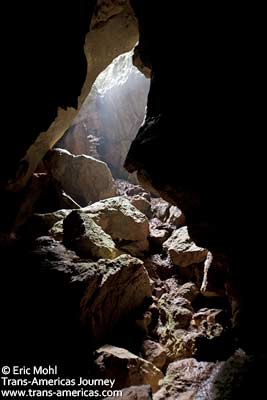 A cave-in created this skylight in the Actun Tunichil Muknal (ATM) cave in Belize, a rare source of light in the otherwise pitch black underworld.

After about an hour of walking through the cave you reach a big boulder on the cave floor. Everyone in our group scrambled to the top of it and then hopped onto a lip in the cave wall–a journey many Mayans had made before us. The expansive area on this huge ledge is called The Cathedral and it’s an ancient offering site that’s littered with dramatic artifacts. 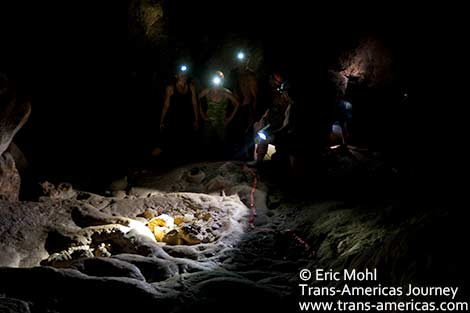 Ancient Mayan fire pits and ceremonial pottery in The Cathedral area of the Actun Tunichil Muknal (ATM) cave in Belize.

The cave is thought to be about three miles long but you only have to travel about a mile in to reach The Cathedral area. The artifacts and the cave environment here are so fragile here that you have to take your shoes off and proceed with just socks on. This is, in part, because the soles of your shoes damage the cave. More important is the fact that we all pay more attention to where we’re walking when we’re barefoot and the trail through this section of the cave winds around the fire sites and ritually-arranged pots.

Some guides have managed to lay pitiful strips of glow in the dark tape around particularly vulnerable artifacts, but it still requires full attention to your footsteps to keep from stepping on the fragile remains of the Mayans’ ceremonies. 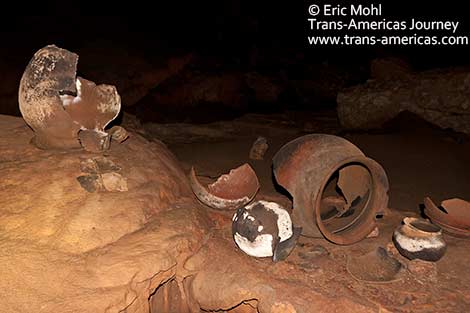 Human remains in the ATM cave

The most dramatic artifacts are, of course, the human remains. Bones from 14 different bodies were discovered here including some children. 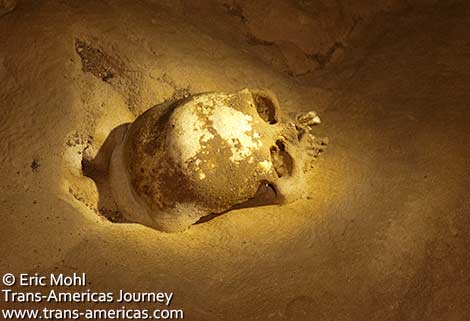 Yes, that’s a human skull. The remains of 14 bodies have been found in The Cathedral area of the Actun Tunichil Muknal (ATM) cave in Belize.

All of the remains belong to male victims except for the so-called Crystal Maiden (below) which is also the only intact skeleton found in The Cathedral. Nobody knows exactly how or why these people were killed inside the cave. 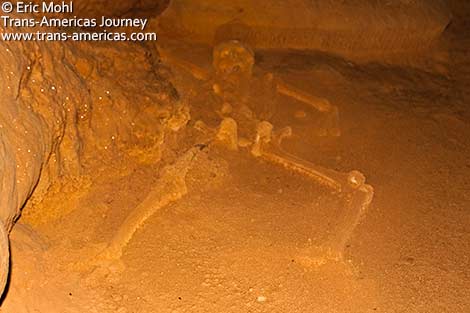 The “Crystal Maiden” gets her name because she’s the only female found inside The Cathedral area of Actun Tunichil Muknal (ATM) cave and her intact skeleton has become covered in sparkling mineral deposits over the years.

Let our video, below, take you inside the Actun Tunichil Muknal (ATM) cave without getting wet.

Don’t forget to bring along an old pair of socks to wear in The Cathedral where you must remove your shoes.

Don’t wear just a bathing suit. Yes, you’ll be wet for the entire tour but you’ll also need to climb and scramble over rocks and through smallish spaces (nothing too tight) and up into The Cathedral area and having shorts and a t-shirt on make it more comfortable. It’s also quite possible to get cold inside the cave. 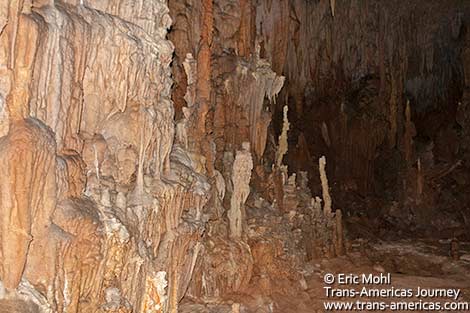 Because of the fragile nature of the cave and the Mayan artifacts it houses the Belizean government has licensed less than 30 guides to enter the cave. Most of them are working for tour companies in San Ignacio who will all bid hard for your business (we saw ATM tours for between US$60 and US$80 per person). No matter who you choose here are some crucial issues to address:

And one last tip….

The ATM cave experience is all the more dramatic because these amazing artifacts are still in their original positions. However, damage is being done. A woman in our group blindly stepped on some pottery during our tour and one of the skulls in The Cathedral has a big hole in it where a visitor’s camera landed on it years ago. Local guides and others are saying it’s only a matter of time before the Belizean government closes the cave and/or moves the artifacts to a more protective museum setting.