Every year on January 24 the city of La Paz, Bolivia is invaded by vendors selling doll-house-sized representations of whatever your heart desires. There are mini 4K TVs (complete with tiny little remote controls). There are tiny groceries. There are tiny construction materials in tiny wheelbarrows and tiny finished houses, hotels, and storefronts. There are fake US Dollars, Euros, and Bolivian Bolivianos. Welcome to the Alasitas Market.

The word alasita means “buy me” in the Aymara language and the modern Alasitas Market in La Paz, which lasts 2-3 weeks, is based on the annual pre-Columbian Aymara Chhalasita festival which was meant to bring abundance and involved the trading of goods. The Tiwanaku culture also had a similar celebration. In 2017, UNESCO gave the Alasitas Market in La Paz intangible cultural heritage of humanity status.  A small group of vendors sets up in the city’s San Francisco Plaza (and in every neighborhood around the city), but the real action takes place in the Campo Ferial Bicentennial where more than a thousand vendors sell their wares. We wandered the stalls to bring you this photo essay from inside the Alasitas Market madness in La Paz.

Inside the Alasitas Market in La Paz, Bolivia 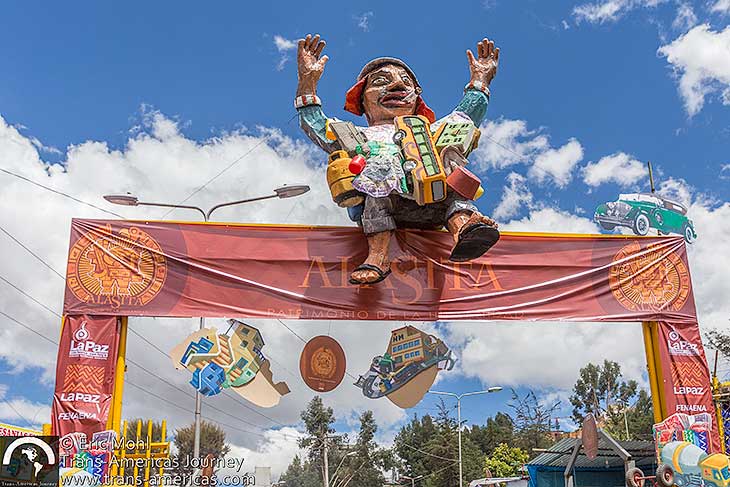 Ekeko welcomes all to the annual Alasitas Market in La Paz, Bolivia. 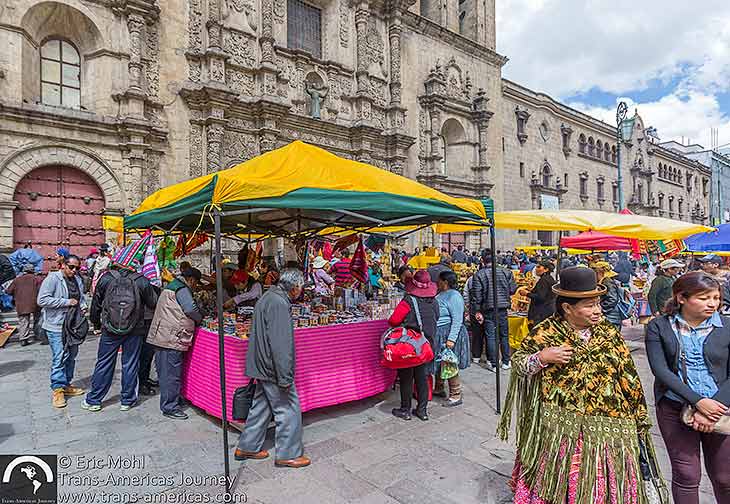 A few of the stalls set up in front of the San Francisco church in La Paz. 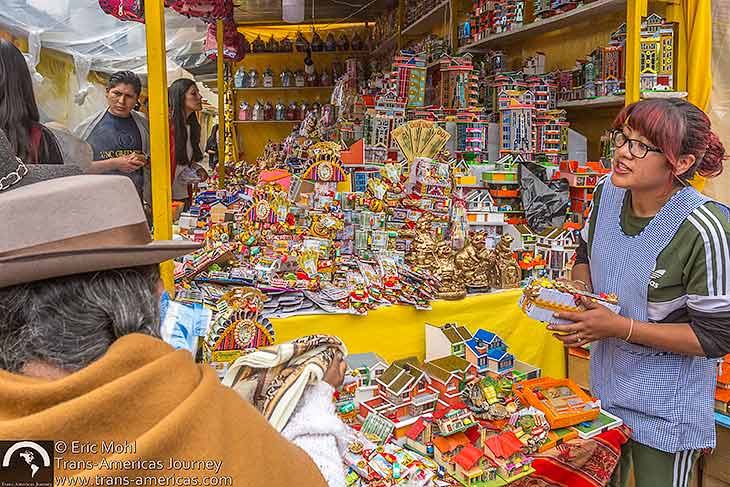 A vendor selling miniatures and piles of fake cash. In a country known to have a counterfeiting problem, fake versions of local money (called Bolivianos) take pains to avoid using the names of actual issuing banks, but the fake US dollars still say Federal Reserve. 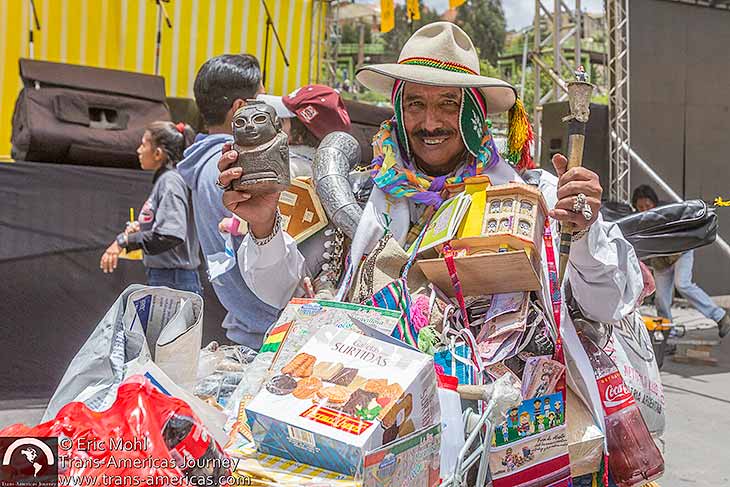 The Aymara god of abundance and fertility, a jolly dude called Ekeko who’s loaded down with goodies, also plays a part in the alasita tradition. 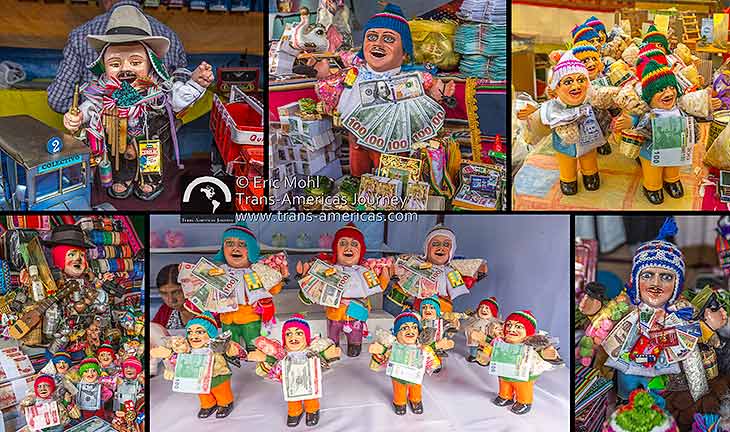 More versions of the traditional Ekeko figure. For some reason, each year also features representations of the animal of the Chinese New Year. This year is the Chinese year of the pig, so pig figures were much more common than Ekeko figures. 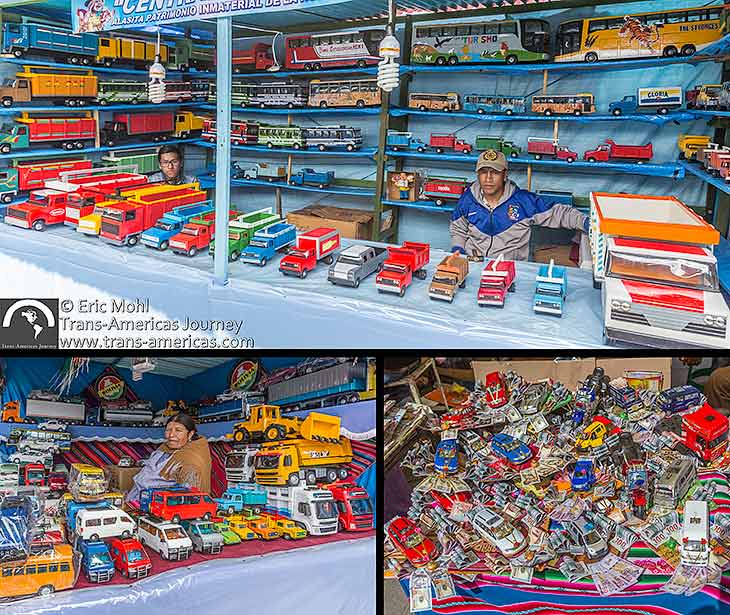 While most vendors are selling cheap goods, there are a few artisans to be found at the Alasita Market, including this man making old-school-wooden toy representations of desired vehicles. 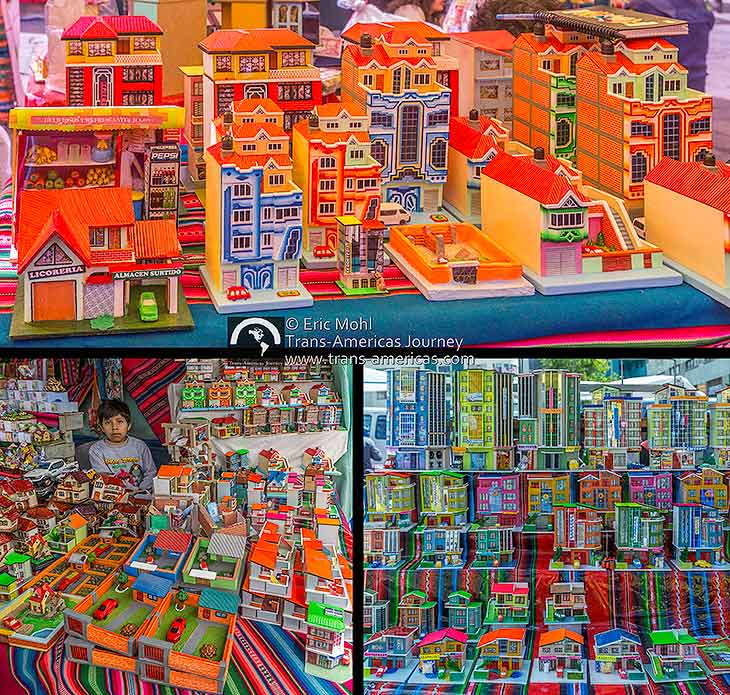 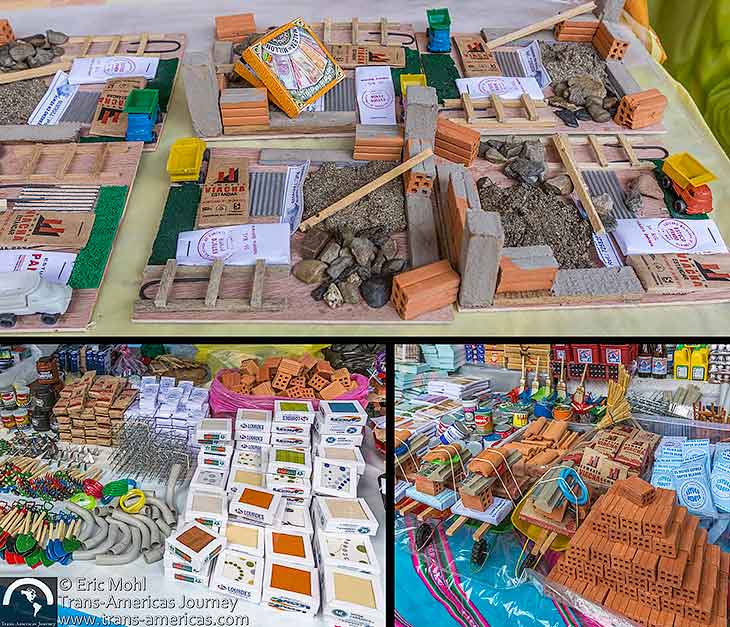 The miniature versions of construction materials, including bricks, tools, bags of cement, and even boxes of tiny tiles, were fascinating. 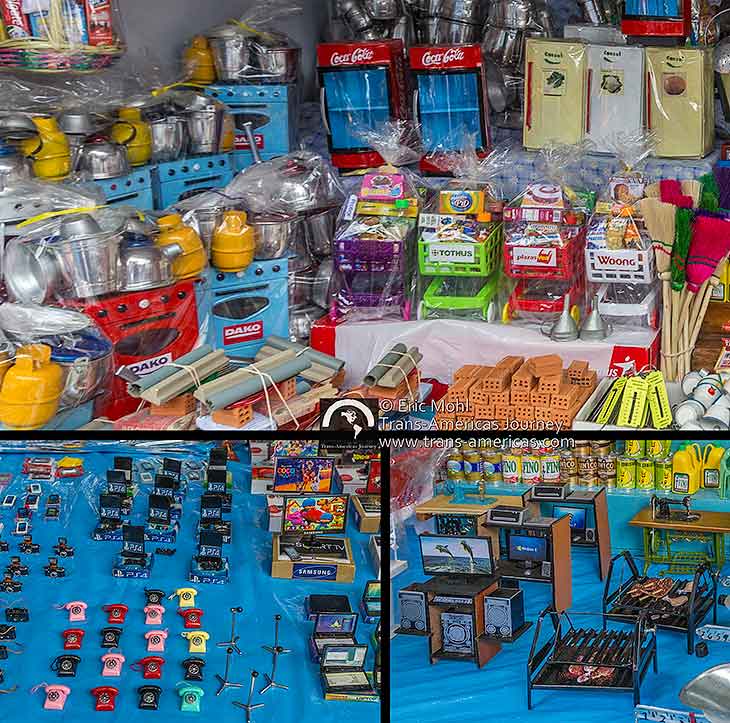 Tiny household appliances, including necessities and indulgences like a home theater system, are also popular. 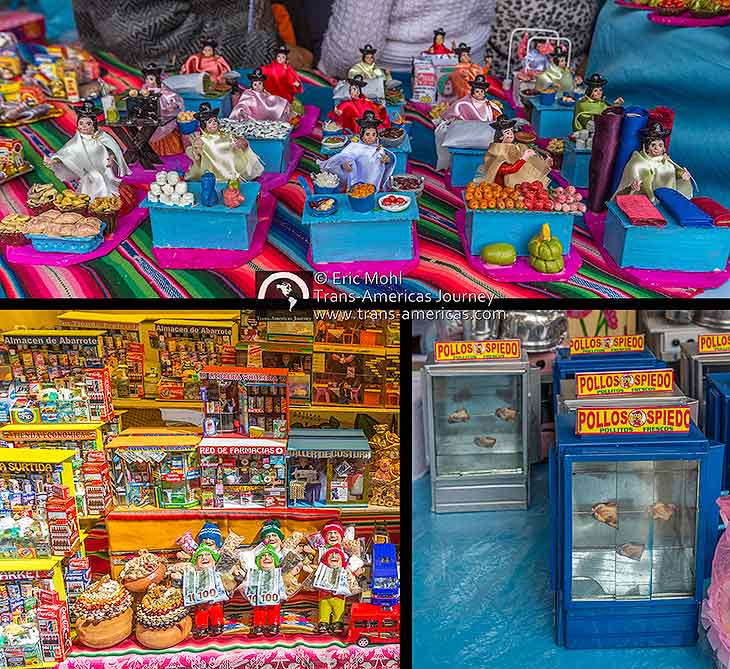 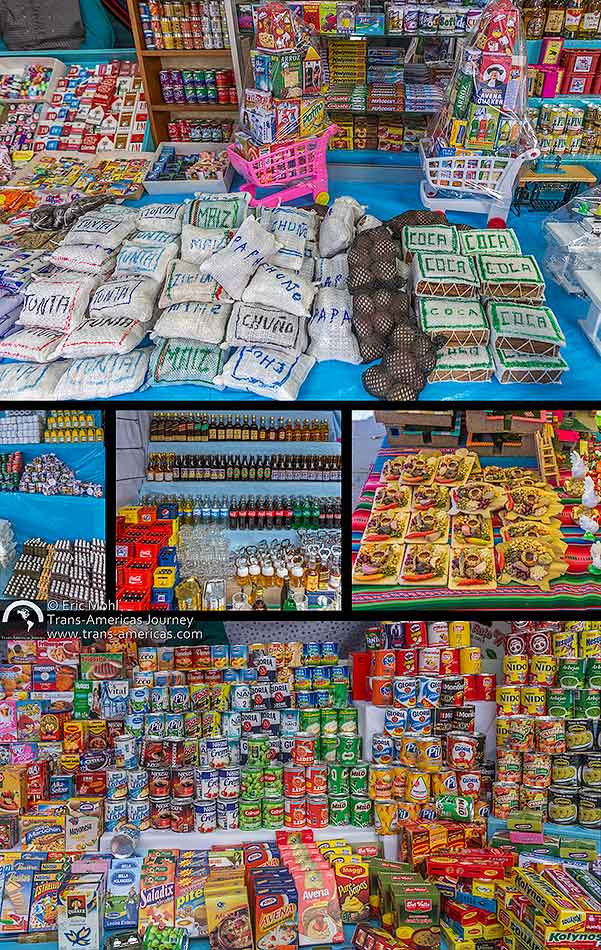 Groceries of all sorts are on offer from fancy imported goods to humble bags of coca leaves and freeze-dried potatoes called chuno. 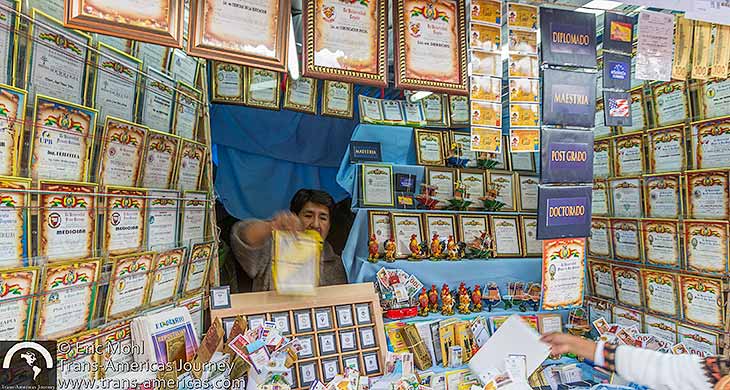 Maybe your dream involves a diploma,property deed, car title, or license of some sort? No problem. You can get a sometimes very convincing fake one at the Alasita Market. 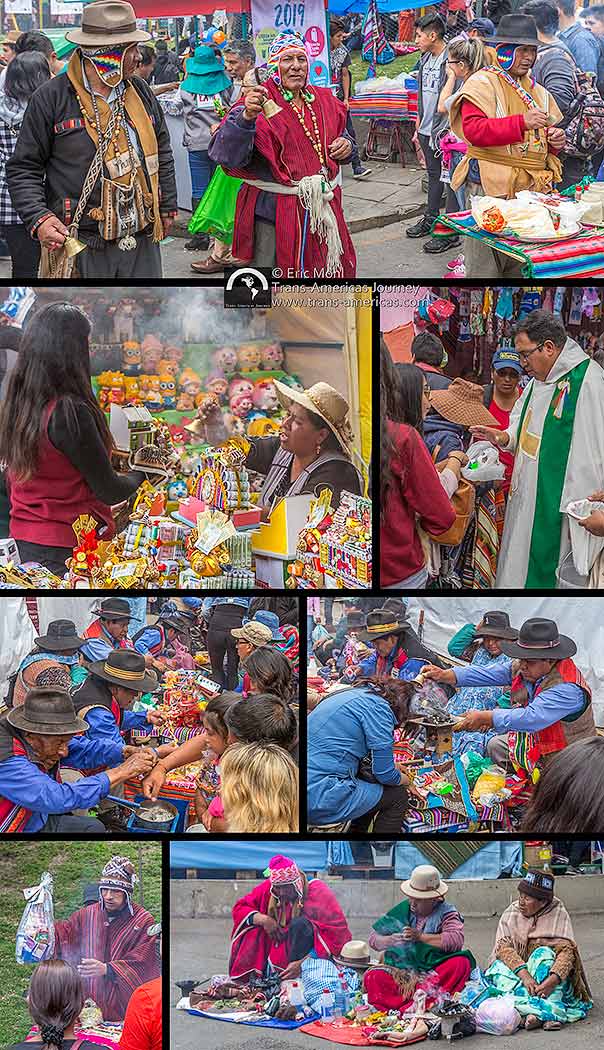 For best results, your purchases representing your wishes and desires should be blessed by a shaman or a priest (or both) and they’re all on hand at the Alasitas Market to do just that. 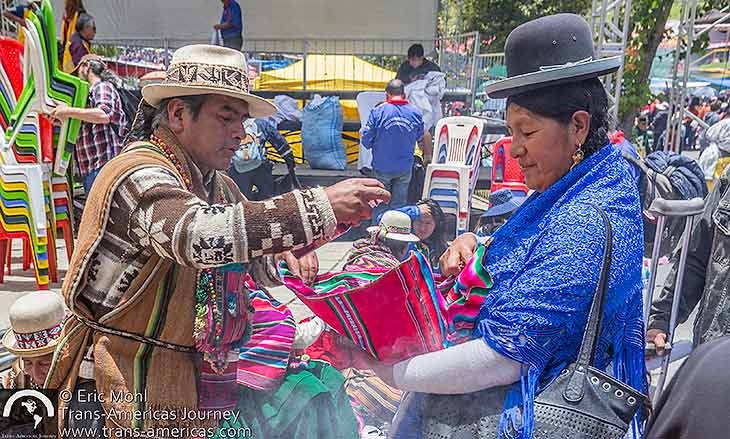 A cholita gets her dreams blessed at the Alasitas Market in La Paz, Bolivia. 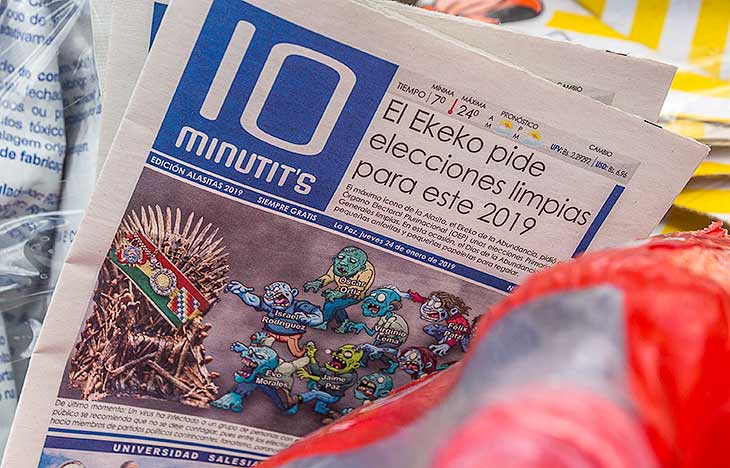 Fake newspapers and magazines are also sold at the Alasitas Market. This one says that Ekeko hopes the upcoming Presidential election in Bolivia is clean and fair. 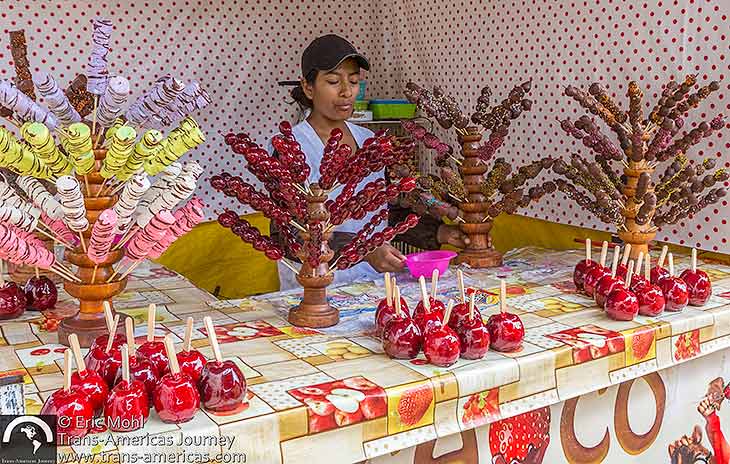 Sweets like this and a whole array of baked goods also play a part in the alasita tradition. 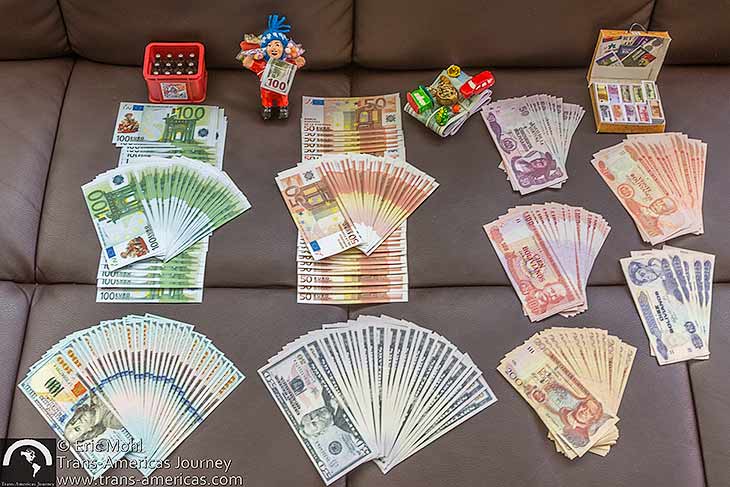 Here’s our alasita haul. For less than $5 we got around $150,000 in fake US Dollars, Euros, and Bolivianos. We also got a suitcase filled with cash, an Ekeko to keep the money rolling in, and a case of beer (labeled Pilsen La Paz instead of the real name of the beer). Bonus: There’s a bottle opener on the bottom of the case of beer.