Belize only produces one domestic beer, the ubiquitous and tasty Belikin which is made near Belize City. Belikin beer has a fantastic label featuring the terraced rocky hulk of an ancient Mayan temple and you can even visit the Belikin Beer Temple at the Altun Ha archaeological site. 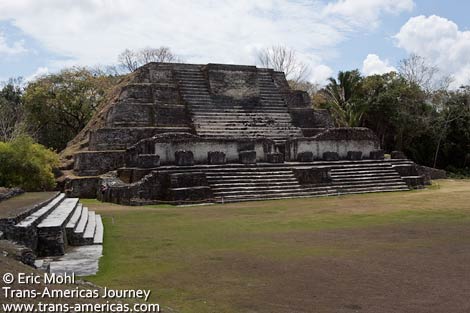 This ancient Mayan temple at the Altun Ha archaeological site doubles as the logo on most bottles of Belikin, the only beer made in Belize.

Working up a thirst at the Altun Ha archaeological site

Altun Ha is a modern Mayan name (the city’s original name is unknown) for a very old place. Habitation dates back to 200 BC and experts in this kind of thing believe that up to 10,000 people lived here during the city’s peak. The excavated area is relatively small, just two plazas.

The Belikin temple is actually the 54 foot (16 meter) tall Temple of the Masonry Altars and you’ll find it in Plaza B at the Altun Ha site and you can climb to the top of it.

We don’t know about you, but wandering around in the sun gawking at really old, really mysterious remains of brilliant civilizations makes us thirsty. Luckily there’s a bar right across the parking lot from Altun Ha. We popped into the Green and Gold Bar–a rough wooden shack with a TV, a surprisingly elaborate sound system, and a disco ball–and were delighted to find plenty of ice-cold, you guessed it, Belikin.