It all started near Guadalajara, where so many good things have happened for us. That’s where we met Pascual and Jakeline who generously invited us to hang out with them in their town, Arandas, which is part of the Ruta del Tequila. A few days later we were there eating, drinking, and meeting the mayor and being serenaded by mariachis. 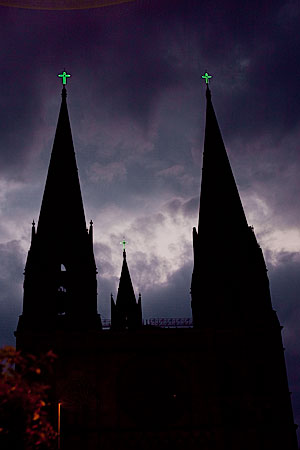 The plaza in Arandas is dominated by a huge Gothic cathedral which reminded us of a much more famous cathedral in Chartres, Paris.

Not only were we treated like family (our eternal thanks to Jakeline’s family for being so wonderful to us), but we had our first brush with politics during a hastily arranged meeting with the Mayor of Arandas. Like politicians everywhere, he was extremely hospitable, but short on time (he had to hurry off to attend the laying of the cornerstone for a new hospital). 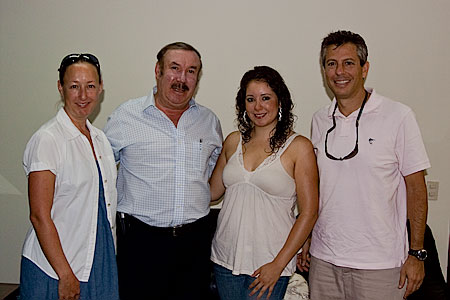 Meeting the Mayor of Arandas along with our friend Jakeline.

Arandas has something of a reputation for exquisite tacos, a food we’ve come to not only love but appreciate having eaten hundreds of the things by now. Jakeline and Pascual took us to Tacos Sanctuario where their buddies worked the grill and the brassier to produce really wonderful tacos. The el pastor tacos we had there were the most unique and most flavorful of any we’ve eaten in Mexico. So far. 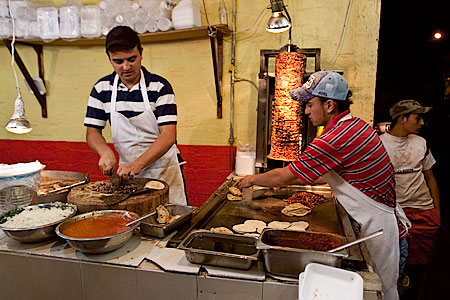 We love tacos and the tacos we had at Tacos Sanctuario in Arnadas, Mexico were fantastic (don’t miss their el pastor).

As if there could be any doubt that a visit to any destination is always richer when you’re with a local, Pascual and Jakeline capped off our first perfect afternoon in Arandas with an evening visit to Hacienda Santa Maria which we wouldn’t have even known existed, let alone gained entry to, on our own.

The hacienda’s barn full of pure-breed stallions in training was so plush it rivaled many of the hotels we’ve stayed in. The stalls were so clean and airy we wanted to curl up in them ourselves. And there’s really nothing better than sipping tequila on the tailgate watching newborn foals learn what their legs are for as the sun sets. 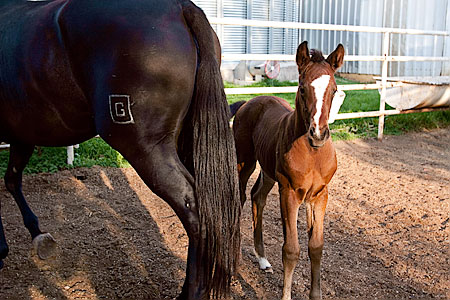 A nine day old foal and its mother at Hacienda Santa Maria outside Arandas.

An evening stroll to the plaza was also an excuse to do some snacking and Jakeline took us to her favorite churro vendor, Mario’s Churros, where fatter and puffier than usual churros are churned out from the cleanest cart we’ve ever seen. Filled with cajeta (a thick concoction that’s halfway to caramel) and rolled in sugar, these fried dough sticks are deadly delicious. 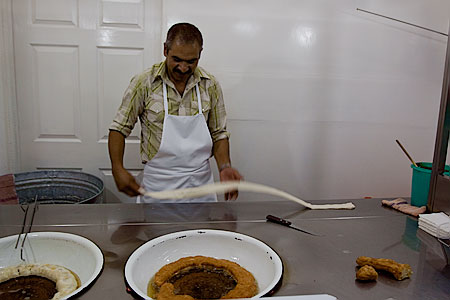 Churros (basically deep fried bread sticks) are found everywhere in Mexico but Mario made the best we’ve had to date.

Pig, in almost any of its many guises, is delicious but nothing beats good carnitas. Carnitas Jaime in Arnadas served up some of the best we’ve had in all of Mexico. 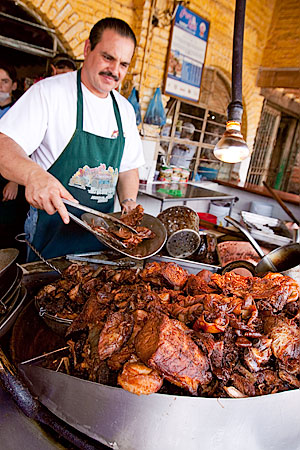 Carnitas Jaime in Arandas served up some of the best carnitas we’ve had in all of Mexico.

A shot of local tequila and a rousing version of  “Arandas”, courtesy of one of the Mariachi bands that troll Carnitas Jaime looking for customers, helped us digest the delicious, delicious pork we had just eaten. 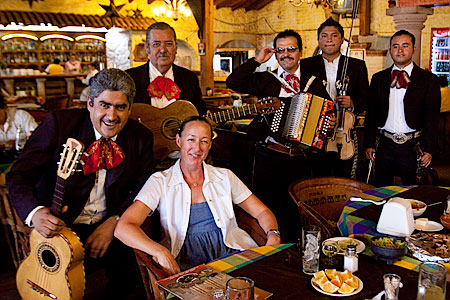 Karen being serenaded by mariachis doing their version of a song dedicated to the town of Arandas after we pigged out at Carnitas Jaime.