There’s plenty to do and see in Cuzco, Peru including a nearby cluster of four Incan archaeological sites that can be explored in a day trip from the city. You can organize a guided day trip tour from agencies in Cuzco (spelled Cusco locally), hire a private taxi to take you around to the sites, or you can do it as a long walk from the city to see the Sacsayhuamán, Q’enko, Tambomachay, and Puca Pucara sites. 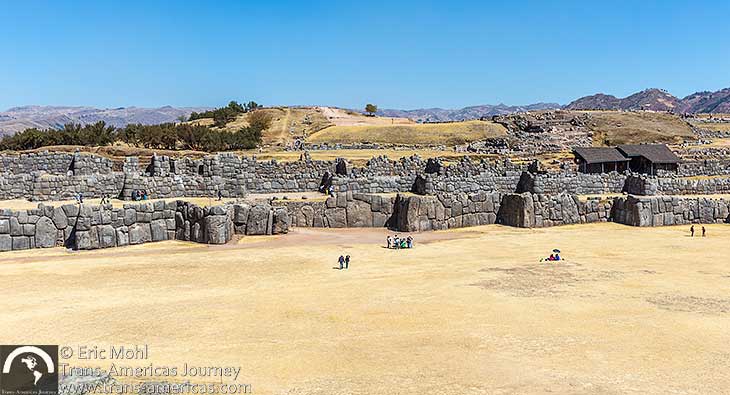 If you decide to do this circuit on foot, set aside a full day, don’t forget water and sunscreen, and plan to walk about 10 miles (16 km) to do the whole route from the city all the way to Tambomachay, the furthest site, and back. Alternatively, you can take a bus to Tambomachay and return to the city walking downhill passing all of the sites. Walking is an especially good idea if you’re in Cuzco to acclimatize to the altitude before a trek or other adventures in the area. 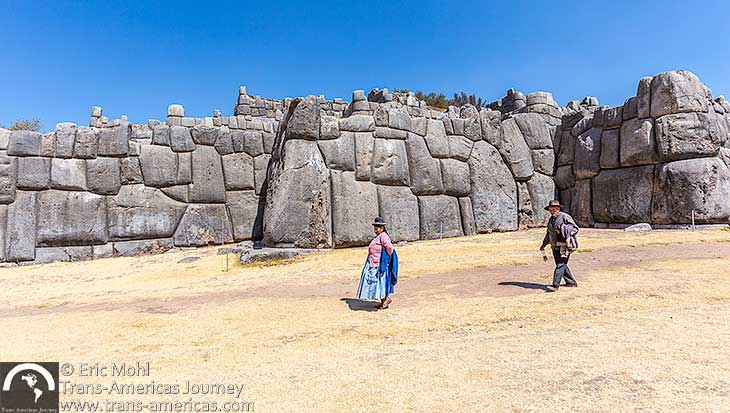 Massive stones in the walls at the Sacsayhuamán site. 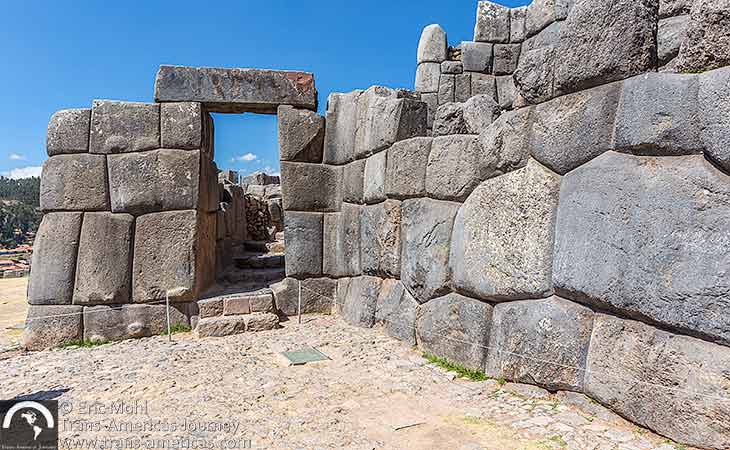 Imposing walls and an impressive gate at Sacsayhuamán.

What we can confirm is that it will take you about 30 minutes to walk moderately slowly about a mile (1.6 km) uphill from Cuzco to this site perched above the city at 12,142 feet (3700 meters). Here you’ll find the largest construction in the entire Incan empire (though sections of it were built by the pre-Incan Killke people) and it was built using some of the largest stones–some are 12 feet (4 meters) high and weigh hundreds of tons. 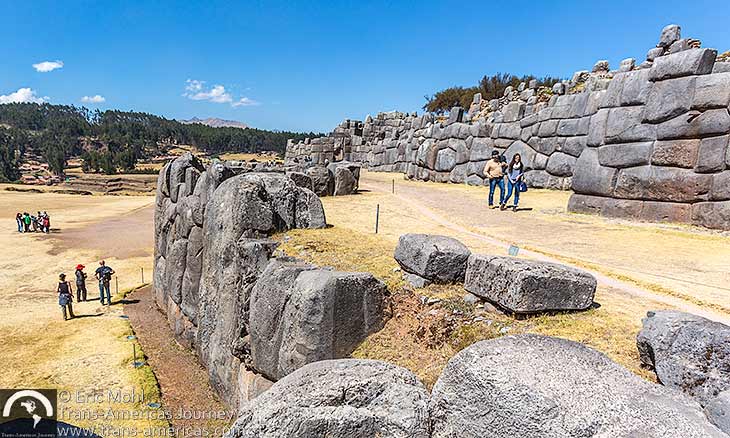 Experts say the place was likely a fort, which helps explain the 17,771 foot (540 meter) stretch of stone wall made in a zig-zag. After the Spanish conquistador defeated the Inca they pillaged the site for building materials and destroyed much of the site in the process. Every June the annual Inti Raymi celebration culminates at Sacsayhuamán. Allow at least an hour to wander around and don’t miss the Incan slide which you can still use. 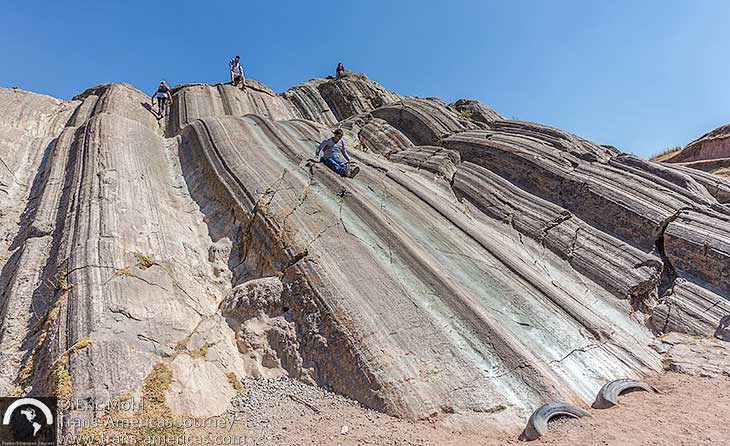 Don’t miss this “Incan slide” at the Sacsayhuamán site. 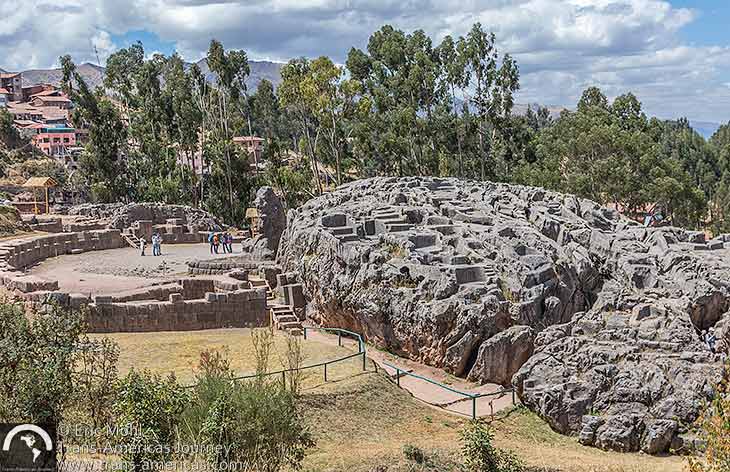 The Incans carved water channels and decorative elements into the top of this boulder at the Q’enqo site.

The Q’enqo archaeological site was likely a temple and the centerpiece is a large boulder with channels and characters carved into the top. You used to be able to walk on the top of the boulder in order to see the carvings, which include condors and llamas, but no one is allowed up there anymore. 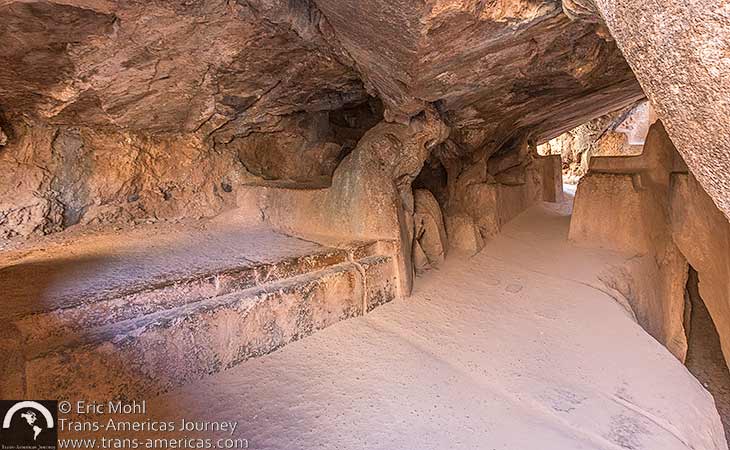 Part of the remains of the Q’enqo site near Cuzco. 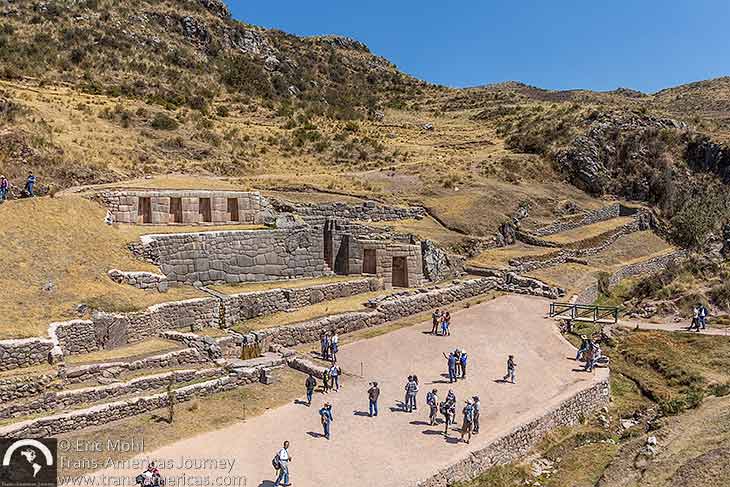 The Tambomachay site is sometimes called the “Incan Baths” because of the intricate waterworks, but it was probably used as a sacred site, not a bathing site.

The Tambomachay site, sometimes call the Incan Baths, is all about water. There’s a natural spring here and the Incas created an artful network of canals, channels, aqueducts, and spouts which still move the water around today. 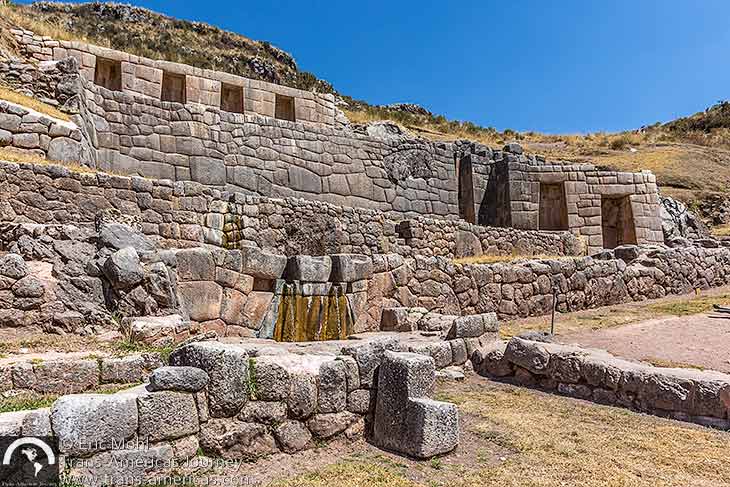 Water still flows through some of the canals created by the Incans at the Tambomachay site.

Puca Pucara is located on a bluff with views of nearly all of the surrounding area.

Right across the road from Tambomachay is Puca Pucara which was a small fortress (the name means Red Fortress in Quechua), so it’s located on an outcropping with a good vantage point. However, you can’t see Cuzco from here as advertised. 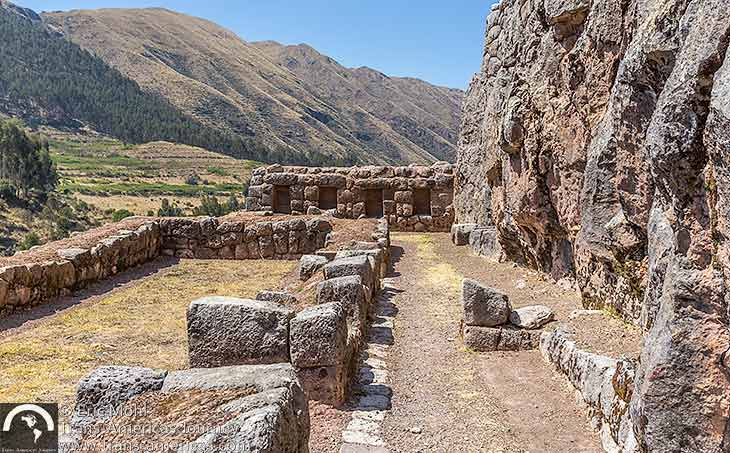 The remains of stone structures at Puca Pucara.

Entry to all four of these sites is included in the Boleto Turistico which costs 130 soles per person (about US$39) and is valid for 10 days. All four sites are also covered in the more limited Boleto Parcial 1 which covers just these four sites, is valid for one day, and costs 70 soles per person (about US$21). However, if you plan to visit the major sites in the Sacred Valley and churches and museums in the city, the complete Boleto is a better value. 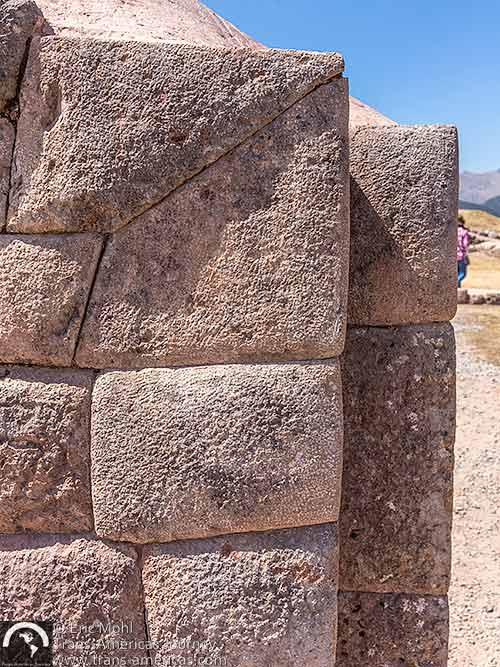 Puca Pucara was probably built as a fort or lookout point, not a royal structure, but it still has some intricate and precise stonework.

Complete your Cuzco, Peru trip planning with our city travel guide to restaurants in Cuzco, and our city travel guide to hotels in Cuzco. And if Machu Picchu is also on your itinerary, don’t miss our 3-part series of posts about travel to Machu Picchu. And our Sacred Valley Travel Guide includes everything you need to know about exploring this nearby valley’s other Incan archaeological sites plus where to eat and drink, how to find the best hotel for you, and other activities you will enjoy in the Sacred Valley in Peru.