If you’ve got your heart set on soaking in a thermal pools at night in the town of La Fortuna, Costa Rica while watching the glow of molten lava as it slowly travels down the face of nearby Arenal Volcano you can stop reading this post right now. 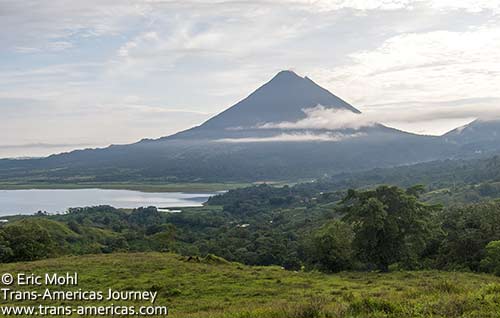 Arenal Volcano isn’t active at the moment and hasn’t done more than spew steam for years.

Spoiler alert: Arenal Volcano is not currently active. In fact, it hasn’t done anything more than spurt out the occasional steam burp for years. This is, apparently, news to those promoting the area, including the Costa Rica Tourism Board whose official website currently says that the Arenal Volcano “offers daytime and nighttime viewing opportunities”. Luckily, the hot springs are still hot even if the volcano is, well, not so hot.

But are hot springs, copious zip line tours, and an alarming concentration of hostels of varying quality enough to warrant a visit to this ramshackle tourist ghetto of a town that sprung up around a volcano that’s no longer putting on a show?

Battle of the hot springs in La Fortuna

There are more than half a dozen different places in and around La Fortuna where you can soak your bones in pools filled with water heated by the volcano. Tabacon Grand Spa Thermal Resort is the fanciest, most famous, and priciest of the bunch. We skipped it because we just don’t believe any hot tub can be worth US$60 per person and up for a day pass.

We did spend a day at Baldi Hot Springs Hotel Resort & Spa, another long-established thermal spa in La Fortuna. We got a day pass for Baldi from a tour operator in town for a much more reasonable US$27 including lunch. Baldi is huge with at least eight different pools. There are three water slides, a cafeteria (serving the food you’d expect in a cafeteria), built-in concrete and tile lounge chairs, two swim up bars, a sauna, a hotel, etc. It’s a heavily man-made environment with a lot to offer families, children and large groups. We do not fall into any of those categories. 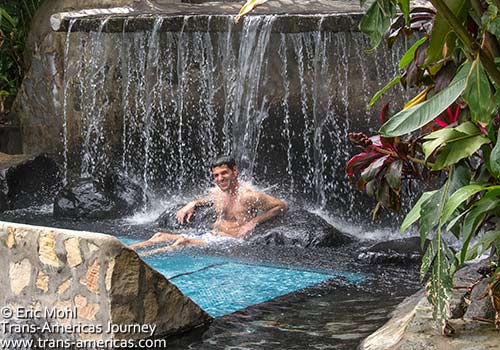 A hot pool at Baldi Hot Springs, one of many hot springs options in La Fortuna, Costa Rica.

Just as we were about to give up on the concept of thermal spas in La Fortuna we visited  Eco Termales Fortuna (around US$30 per person for baths only; around US$50 per person with dinner). Located directly across the street from Baldi, this option differs in many important ways. First of all, they cap visitors at 100 per four hour session (10 am, 1 pm, or 5 pm). Unlike the cafeteria at Baldi, the restaurant at Eco Termales is known for its delicious chicken dinner. The honor bar (US$5 for all beverages) is charming, and there are no slides or built-in loungers. Infrastructure was kept to a minimum here–just enough to collect hot water in seven attractive but simple pools and make it easy to get into and out of them.

Still, how long can you sit in a pool of hot water, right? So what else is there to do in La Fortuna? Despite the lack of volcanic activity, you can still visit Arenal Volcano National Park (US$10 per person). The park has three easy trails including one that takes you over some of the lava field with alarmingly close views of the volcano on a clear day. 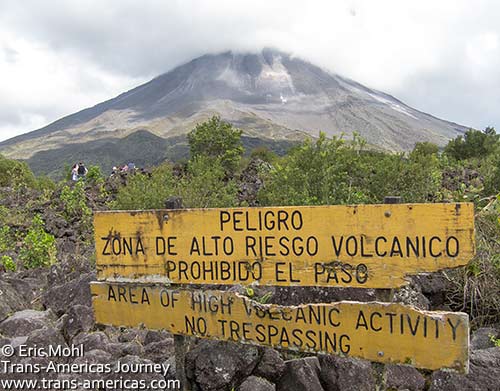 Despite the warning on this sign inside Arenal Volcano National Park in Costa Rica, this volcano has been inactive for years.

You’re not allowed to climb Arenal, but neighboring Chato Volcano is hikeable if you’re so inclined. We’re told there’s a lovely lake in the crater. The La Fortuna area also has way more than its share of zip line operators (who all seem to have annoying billboards up everywhere) and then there’s the stunning Fortuna Waterfall (US$10 per person) just outside of town. 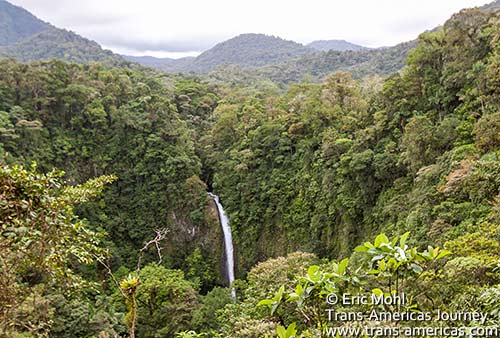 Fortuna Waterfall as seen at the start of the steep trail down to its base.

A steep descent of about a quarter of a mile (0.4 kilometers) along a mostly-paved trail delivers you to the foot of this thunderous 230 foot (70 meter) high cascade. Grab some shots at the viewing platform, then descend a few more steps to a protected swimming area just downstream from the falls. The current is playfully strong and the water is blissfully cold and clear enough to see fish whooshing by. If you happen to know how fish survive the trip over a 230 foot waterfall please fill us in. 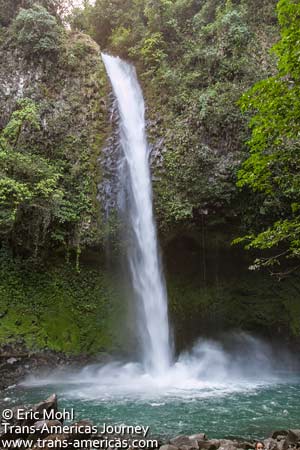 The final section of the 230 foot high Fortuna Waterfall in Costa Rica.

If that’s enough to fill up a few days in La Fortuna be prepared to have to hunt around for affordable food. Most restaurants offer overpriced versions of what they think tourists want to eat. There is one notable reason to splurge on a meal in La Fortuna: Costa Rican owned Restaurante Don Rufino looks, feels and tastes like a world class bistro with the service (and price tag) to go with it. 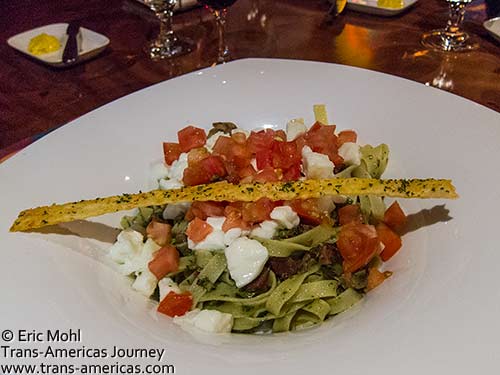 The future of La Fortuna

Like Monteverde and Santa Elena the Arenal and La Fortuna area has sprawled willy-nilly and now has no discernable center, no real personality and, now, no active volcano. So, what does a destination largely based on volcanic activity do when their claim to fame decides to take a nap?

We’re happy to report that a number of locals are pondering that very same question. One of them is Juan Sostheim and he’s no stranger to change or to innovation. About a decade ago the former fast food exec made a 180 degree turn in his life, creating Rancho Margot, in part, to prove that green (eco) and green (economic) are not mutually exclusive.

So many people in Costa Rica recommended that we check out Rancho Margot (from US$150 double in bungalow accommodations including three meals, a two hour tour of the impressively innovative operation, and daily yoga) that we actually returned to La Fortuna soley to check it out.

Putting the “eco” in economic at Rancho Margot

There are 16 bungalows at Rancho Margot plus a sustainable farm including dairy cattle, pigs and a creamery on 400 acres. The bungalows are nicely outfitted with two queen beds, ceiling fans, private bathrooms and huge wrap-around decks with furniture and hammocks.

All furniture and fixtures are made on site. All electricity is generated by a small hydro plant. Heat created by the composting process is used to heat water for showers and for the enormous hot pool. All food is grown on the property and it’s cooked in a kitchen powered by methane.

Juan now claims that Rancho Margot is the only carbon negative hotel in Costa Rica, meaning your stay there negates the carbon created by your journey and then some. If you’re lucky Juan will be around Rancho Margot during your stay so you can hear him passionately and rationally explain his sustainability goals. In the meantime, hear Juan’s explanation of Rancho Margot in his interview on CNN as part of their What’s Next series.

You can expect many things at Rancho Margot but views aren’t among them. Though it’s located near Lake Arenal the water is not visible from the premises. And if you want to see Arenal Volcano it requires a stiff, steep, 20 minute hike up a muddy hillside to an admittedly stellar ridge-top vantage point. When Arenal was still active the view must have been heart-stopping. 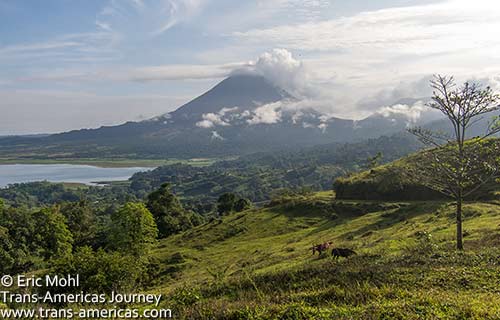 Early morning view of Arenal Vocano, which is currently inactive, from the hill above Ranch Margot in Costa Rica.

Bonus: The only brewpub in Costa Rica

It seems like we’ve been talking about beer a lot lately, but that’s probably okay with you. Here’s another beer tip: the Volcano Brewing Company opened on Lake Arenal in 2011. You’ll pass it on the road that goes around the lake between Cañas/Tileran and La Fortuna and it’s absolutely worth a stop (they have a huge sign–you can’t miss it) for perfectly acceptable beers with spectacular lake and volcano views. And if you have a few too many at “the only brewpub in Costa Rica” don’t worry. The brewpub is located inside a hotel they call “Costa Rica’s only Microbrewery Hotel” so you can sleep it off. The owners also own Witch”s Rock Surf Camp near Tamarindo where their craft beers are also served.