Lake Apoyo, near Granada, Nicaragua, with Mombacho Volcano in the background to the right.

The weird waters of Lake Apoyo

Just 20 minutes or so from Granada lies the Apoyo Lagoon Natural Reserve. Established in 1991, the reserve protects 8,648 acres (43 km²) of jungle and geology including Lake Apoyo, a crater lake formed in the extinct Apoyo Volcano more than 200 years ago.

Lake Apoyo is said to be the cleanest place to swim in all of Nicaragua (but you still can’t drink the water) and it’s home to some species of fish that are found nowhere else. Despite the fact that the lake is more than 600 feet (200 meters) deep at its deepest point, the water is warm since the lake is fed by active fumaroles below it. The water is also slightly salty and is said to contain healing minerals. It just felt like slimy bath water to us.

You can hike, kayak, swim, go bird watching, and get real familiar with the dinosaur-like call of the area’s many howler monkeys. Thankfully, motorized craft (jet skis, boats) were recently banned on the lake. There are also some volunteer opportunities, Spanish schools, and a few restaurants and hostels and hotels around the lake. 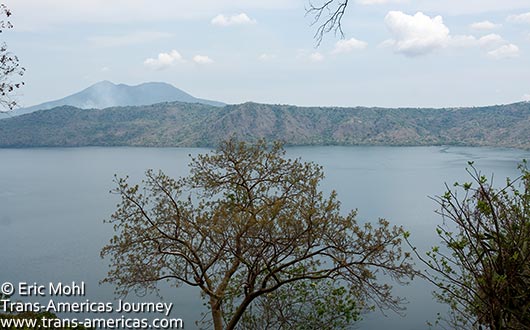 Lake Apoyo with Mombacho Volcano in the background near Granada, Nicaragua.

We stayed at Apoyo Resort (which used to be called Norome Resort & Villas) in one of their 60 villas in the jungle, all with full kitchens. We watched a small troop of howler monkeys pluck flowers off a tree near our deck as homemade pasta sauce simmered on the stove. Heaven. 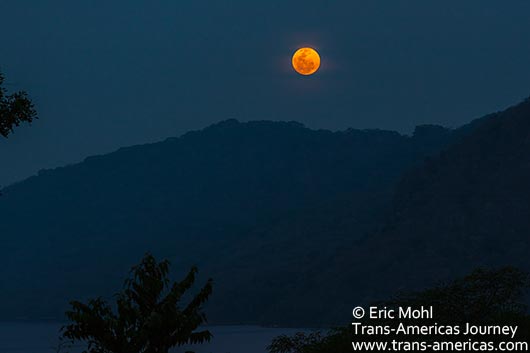 A rare supermoon in the dark skies above Lake Apoyo in Nicaragua.

Our timing at Lake Apoyo was accidentally perfect and one night we got to enjoy views of a rare supermoon from the hillside pool without the interference of any light pollution.

An epic drive up Mombacho Volcano

The Mombacho Volcano is considered extinct. Its last eruption was in 1570. That’s given the cloud forest in the area plenty of time to re-forest the slopes of the volcano which means that unlike more recently active volcanoes, the hiking trails around Mombacho are shaded and travel through more than just rocks and scree. But first you have to get there. 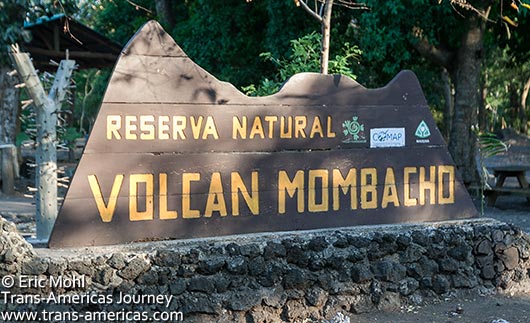 Entering the Mombacho Volcano Natural Reserve near Granada, Nicaragua with one epic road in front of us.

We paid US$5 per person to enter the Mombacho Volcano Nature Reserve that surrounds the volcano itself. You can pay an additional US$15 per person to take official transportation up the paved road from the entrance to the volcano or you can pay US$18 and drive yourself and a carload of friends up to the top as long as you have a 4X4.

They aren’t joking about that 4X4 part. Though the road is paved and in good shape it’s wicked steep, climbing more than 3,000 feet (900 meters) in 4 miles (6.5 km). Even in 4-low our truck huffed and puffed all the way up and down was no easier.

Once at the top we found a respectable visitor center with an impressive diorama of the area. There are a number of trails up to 4 miles (6.5 km) long that you can hike alone. The longer trails require a guide (US$10). 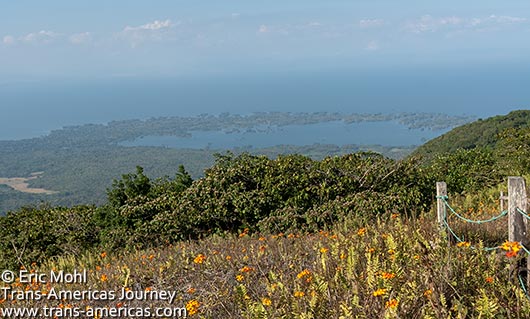 Lake Nicaragua seen from one of the trails around Mombacho Volcano near Granada, Nicaragua.

We hiked the crater trail down to some fumaroles along a shaded trail that was in excellent shape. At various points on the trail we also got great views of Granada and of Masaya Volcano in the distance. 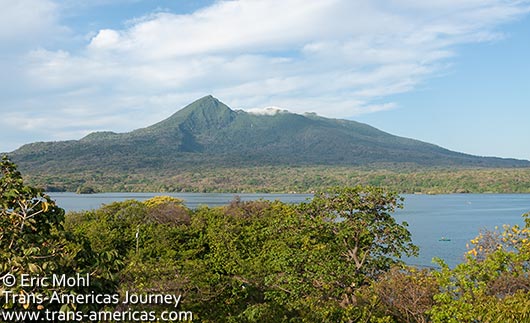 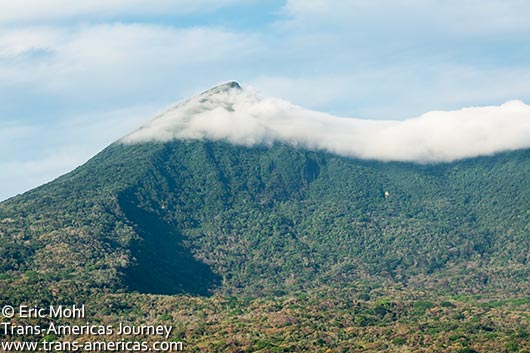 Clouds stream off the top of Mombacho Volcano near Granada, Nicaragua.

Granada was settled on the shoreline of Lake Nicaragua, aka Lake Cocibolca. It’s possible to book a boat tour of the lake and its dozens of small islands or even kayak around. We toured the lake on our way out to Jicaro Island Ecolodge which occupies its own small island. 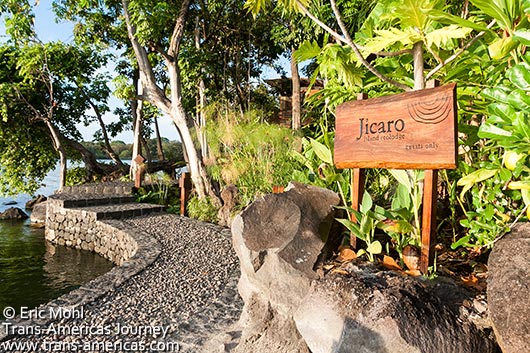 Jicaro Island is one of our favorite green boutique hotels in the country and home to one of the best pools in Nicaragua. There are more tempting reasons to make a reservation in our full Jicaro Island Ecolodge review. 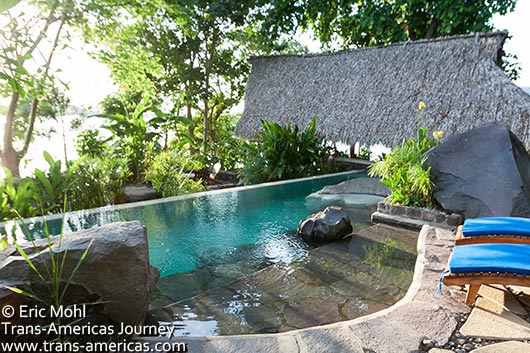 Lake Nicaragua still has a few bull sharks in it so we stuck to the pool at Jicaro Island Ecolodge. 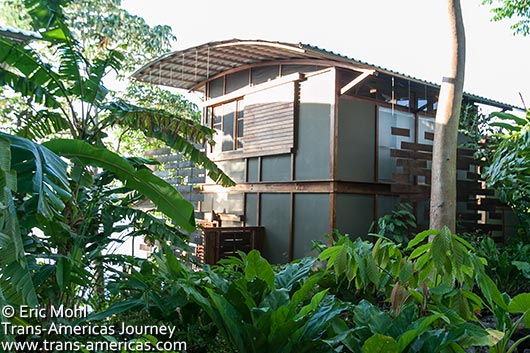 We’re not carpentry geeks, but the woodworking in the structures and furniture at Jicaro Island Ecolodge stunned us.