Before we traveled to the town of Ataco (aka Concepción de Ataco), part of the lush, mountainous Ruta de las Floras (Route of the Flowers) circuit in northern El Salvador, we didn’t fully understand coffee’s deep, dark role in this country’s history. Turns out, trouble was brewing in coffee growing regions like Ataco long before the official start of El Salvador’s civil war. 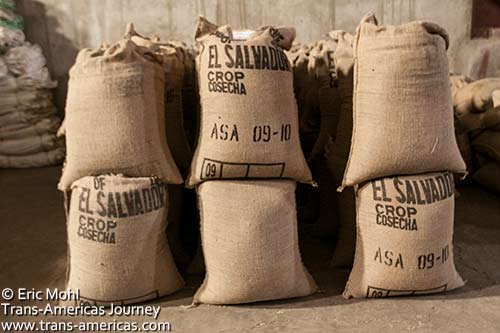 World class coffee grown in the Ruta de las Flores area of El Salvador, bagged up and ready for shipping.

After the invention of synthetic dyes in the late 1800s, El Salvador’s wealthy indigo farmers scrambled to find another cash crop. They settled on coffee. And they did well.

The success of coffee cultivation in El Salvador created an even greater divide between the very rich and the very poor and in January of 1932 economic and social tensions reached the breaking point. Augustín Farabundo Martí, a founder of the Central American Socialist Party, led an uprising of peasants and indigenous people who El Salvador’s military quickly squashed by methodically killing an estimated 30,000 people. Anyone who supported the campesinos and anyone who looked or sounded indigenous was doomed. To this day, indigenous groups in El Salvador tend to shun their traditional clothing, preferring to blend in by wearing jeans.

This terrible time is known as The Massacre (La Matanza) and some consider it to be the actual start of El Salvador’s civil war which didn’t “officially” begin until 1980. Before La Matanza was through, Martí was shot by a firing squad, however, he remains a revered and martyred figure to many and is memorialized in the name of the FMLN (Frente Martí Liberación Nacional) which is currently the ruling party in El Salvador. 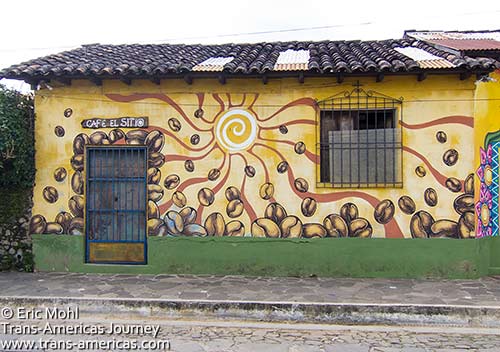 Coffee beans and streaming sunshine in the distinctive painting style that covers much of Ataco.

There is no obvious physical legacy of all that trouble in the sleepy town of Ataco along the 23 mile (36 kilometer) stretch of scenic road dubbed the Ruta de las Flores after the blooms which explode here, particularly between October and February. The coffee plants sprout a blanket of fragrant, white blooms starting in May. 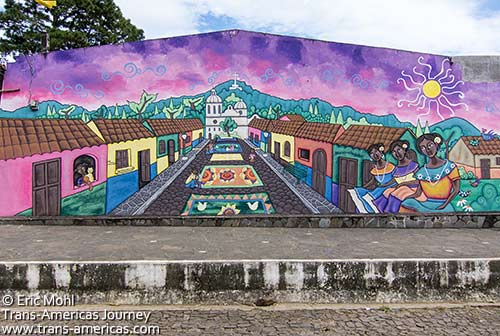 Just one example of the vibrant, cheerful painting style that covers many of the walls in Ataco.

These days Ataco seems more intent on retaining its easy-going ways, cautiously welcoming travelers and fostering the distinctive local style of art than rising up against the coffee finca owners.

Some of the world’s best coffee is grown in El Salvador and some coffee plantation and processing plant owners are branching out into tourism too.

We now return to our innocent love of coffee

Hotel first. We stayed in the original portion of the property which is an airy, almost ranch-style building with four guest rooms, a large sitting area, wide porch, and full kitchen where breakfast is prepared every morning. 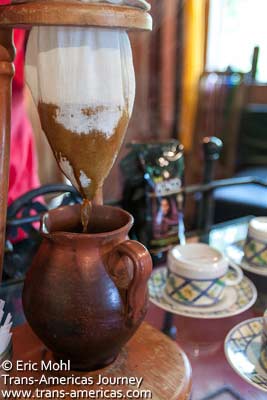 Coffee made the traditional way by dripping through a simple cloth sack.

The family’s separate, personal residence has also recently been opened to guests as La Casona. Five rooms of varying shapes and sizes have had modern bathrooms added but are still furnished with the family’s antiques. Hallways are lined with family photos, some dating back many decades. It’s a living museum inside an elegant homestay. 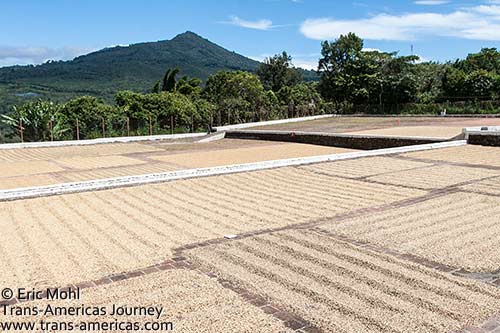 At the El Carmen coffee beneficio, coffee beans are dried in the sun on special patios or in enormous mechanized dryers.

Both sets of accommodations are more than 100 years old and are located right next to the massive El Carmen coffee processing facility (called a beneficio in Spanish) where two hour guided tours are offered (US$5). Opened in 1930, this is one of the oldest coffee beneficios in El Salvador and a tour here is a great way to understand the steps it takes to go from field to cup. 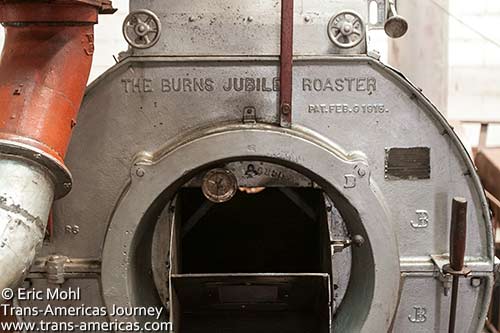 Some of the massive machinery inside the El Carmen coffee beneficio dates back to 1930 when the processing facility opened. This practically antique roasting machine is still going strong. 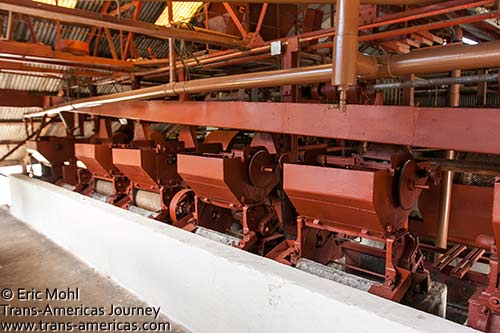 Simple but massive tools for de-pulping fresh coffee beans which are called cherries. 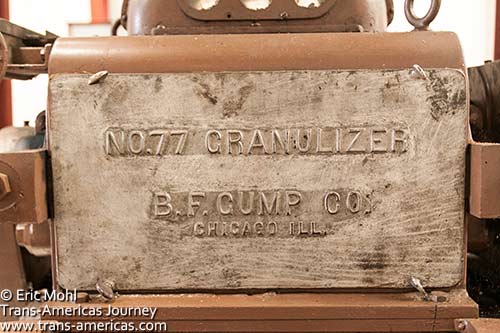 They don’t make machines like this industrial coffee grinder anymore.

El Carmen, which was named after the only daughter in the original patriarch’s family, processes coffee for the giant Illy corporation, among many others, and they pride themselves on their ability to track every customer’s specific coffee from start to finish to ensure consistent quality. Illy even has its own storage area at the beneficio to further ensure that its coffee doesn’t get mixed up with anyone else’s. 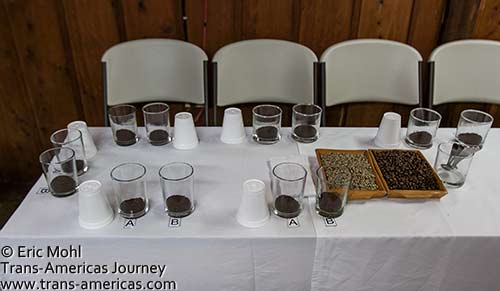 All set up for a “cupping” session during you learn the basics of how to appreciate the taste and aroma of coffee like a professional.

Turns out, watching coffee dry is actually pretty interesting. Check out our (sped up) video, below, of workers raking and aerating green coffee beans at the El Carmen beneficio in Ataco, El Salvador.

Amped up on adrenaline

If it’s adrenaline, not caffeine, you’re after El Carmen has you covered as well with a zip line, ropes course, ATV tours, and horseback rides on El Carmen’s Peruvian Paso horses. We took the horses out for a meander through El Carmen’s coffee-covered hillsides and some of the surrounding mountain roads. It was the first time we’d ridden the breed, known for its clipped, yet steady gait. The horses’ legs prance furiously while everything from their shoulders up remains still. This unique gait was really comfortable in an unnatural kind of a way. 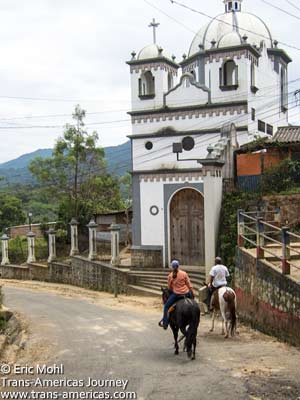 Next, we hopped on ATVs and roared up and down dirt roads that criss-cross El Carmen’s hilly, forested property. Okay, one of us roared and the other drove cautiously observing all reasonable safety measures.

Remember MTV videos in the 1980s? You get a similarly herky-jerky effect when you use a GoPro to shoot footage while you drive around a coffee finca on an ATV. Unless you’re epileptic, check out our video, below, of our ATV tour of El Carmen in Ataco.

Also along the Ruta de las Flores is the 115 foot (35 meter) Don Juan Waterfalls (Las Cascadas Don Juan). Not only does this waterfall have a killer name, it’s also one of El Salvador’s most accessible. 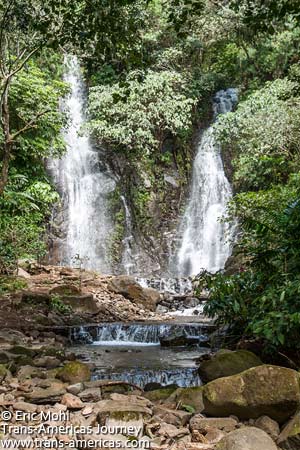 Las Casacadas Don Juan, one of the most accessible waterfalls in El Salvador.

Look for a sign and parking area where you pay a US$1 entry fee. Then walk up and across the road to the head of a very short trail which leads directly to the base of the two-tiered falls. A perfectly swimmable natural pool is your reward.