City Travel Guide: 17 Top Things To Do in Quito, Ecuador

Too many travelers rush through Quito on their way to the Galapagos Islands. Our city travel guide covers top things to do in Quito and gives you 17 reasons to spend a few days in the capital, including ﻿Mitad﻿ del Mundo (the geographic middle of the world), one of our favorite museums in the Americas, some of the most beautiful colonial architecture you’ll see in South America, and much more. 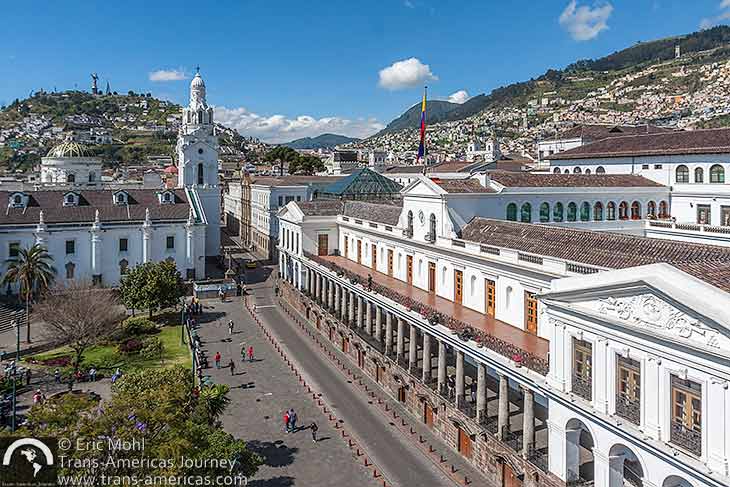 Plaza de la Independencia, aka Plaza Grande, is home to the Presidential Palace and the Cathedral. You can see Panecillo hill and the winged madonna statue in the background.

17 top things to do in Quito, Ecuador

Quito, at 9,185 feet (2,800 meters) and surrounded by volcanoes, was first settled by the Incas before they were overcome by Spanish conquistadors who established their city in the 1500s on top of what the Incans had built. Quito, sometimes called Canton de Quito or Carita de Dios (God’s face), is the capital of Ecuador and its colonial center was named a UNESCO World Heritage site in 1978 making it one of the very first places named on the list. The city is an intriguing mix of old and new. For example, in the colonial center, you’ll see an impressive built-in garbage collection and sorting system next to a church built in the 1500s.

Most of the suggested sites and activities in this post are in the historic center of the city where the cultural highlights are most concentrated. Despite many earthquakes, a stunning amount of colonial architecture remains which means just walking around the city’s historic center is the first thing to do in Quito. 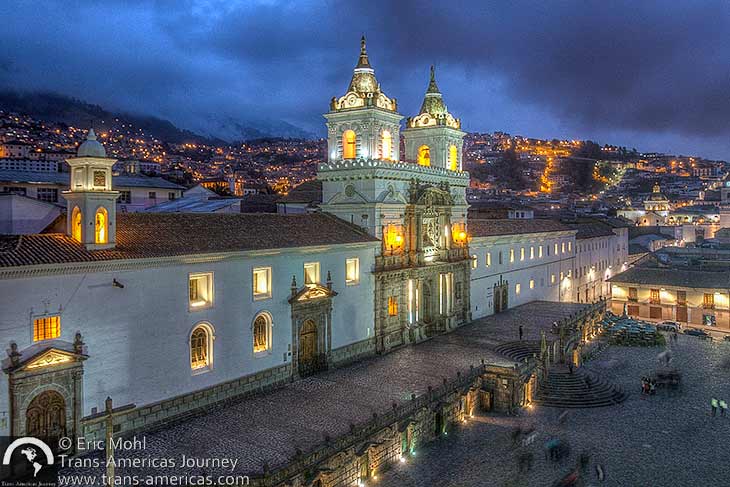 Much of the most stunning architecture in Quito comes in the form of the seven major Catholic churches built in Quito by Spanish conquistadors. Exteriors feature colonial architecture and interiors are opulently decorated. 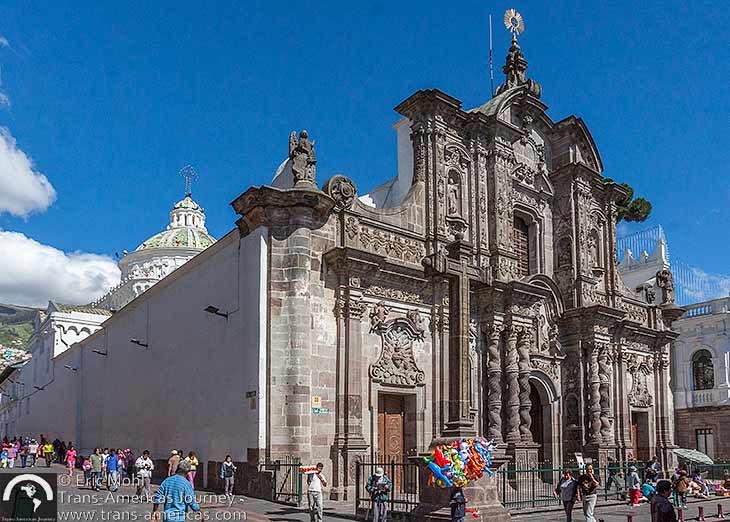 La Iglesia de la Compañía de Jesús (aka Church of the Society of Jesus, US$5) is the most spectacular church in Quito. The Jesuit church took more than 150 years to build and includes Moorish, Baroque, Churrigueresque, and Neoclassical architectural influences. Every surface has been decorated including elaborate stone carvings, massive paintings, and a dazzling amount of gold covering practically everything inside. Hours are limited, and we got a counterfeit US$10 bill in our change. We were also told that the English language tour was not available. Entry may be free on the first Sunday of each month. 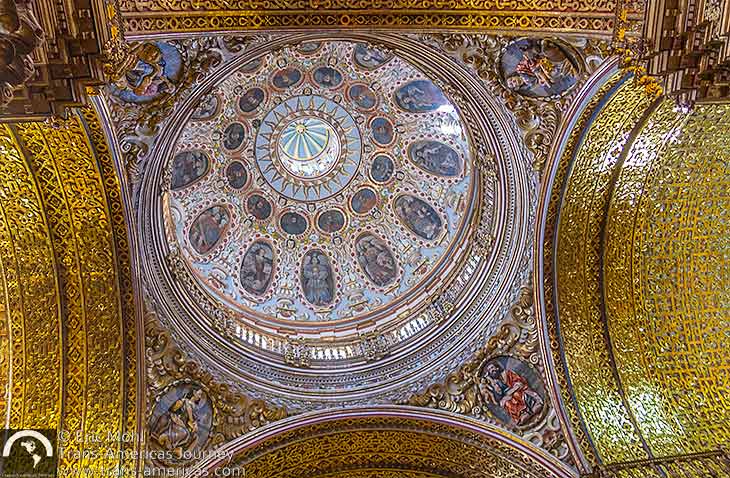 At Quito’s Gothic Basilica don’t miss the peculiarly Andean “gargoyles” depicting local animals (llamas, a condor, an Andean fox) instead of the usual ghouls and goblins. Legend has it that the day this basilica is finished the earth will disappear, so the place is technically still under construction. 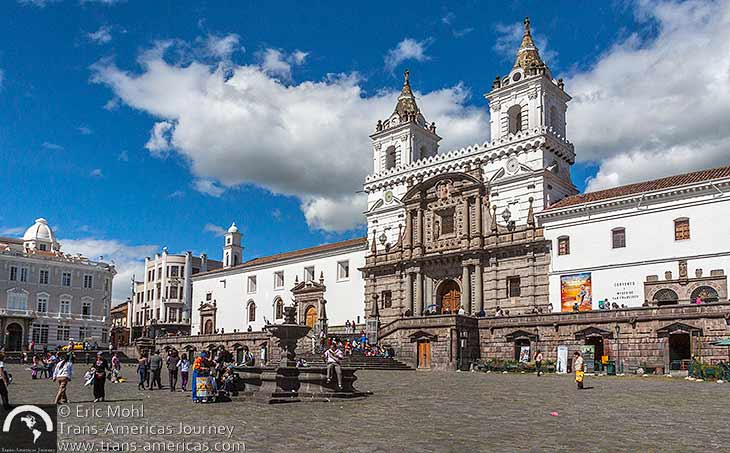 The San Francisco Church and Convent dates back to 1560 and is the oldest Catholic religious site in Ecuador. It’s massive baroque bulk, which was built on an Incan temple, anchors Plaza San Francisco. It has more than a dozen cloisters, three churches, and thousands of works of art including a wood and gold leaf depiction of the Virgin of Quito. A local legend goes like this: an indigenous man named Cantuña sold his soul to the devil (then ingeniously cheated him out of it) in order to get the stone niches built beneath the church complex. The large plaza in front of the church was recently restored and the combination of plaza and church complex is impressive. The church, convent, and cloisters can be visited when you buy an entrance to the museum. 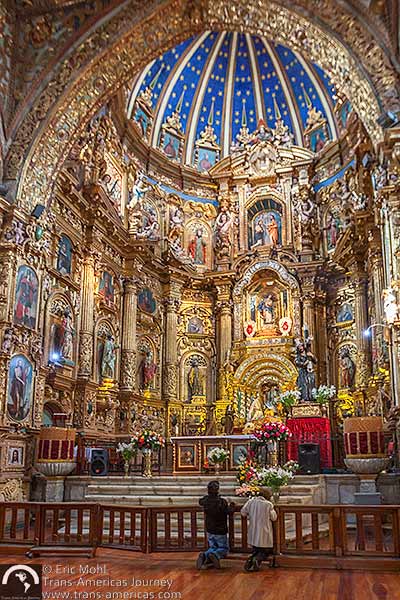 The elaborate altar inside the San Francisco Church.

The Metropolitan Cathedral, on Plaza de la Independencia, is not the grandest church in Quito but it is home to an unusual depiction of the Last Supper with cuy (guinea pig is an Andean favorite) being served on a platter in front of Jesus. 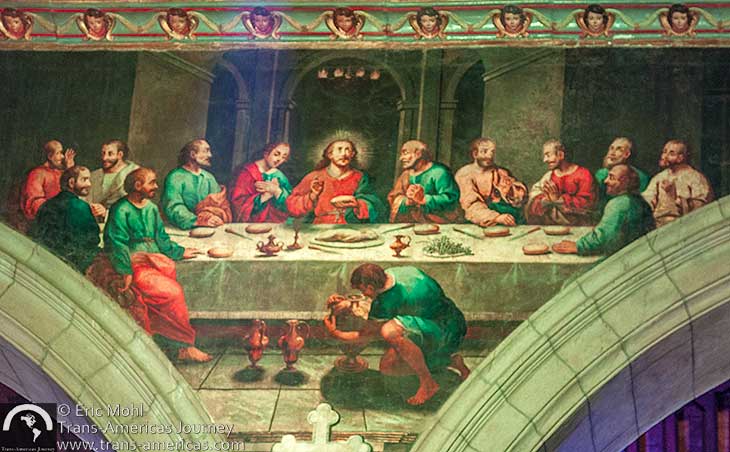 Notice the guinea pig on a platter in front of Jesus in this unusual depiction of the Last Supper inside the Metropolitan Cathedral.

Tip: Visit the city’s churches on Sunday when they’re open for services and you can often walk in and look around (respectfully) for free.

Quito is home to one of our favorite museums in all of Latin America. Casa del Alabado Museo de Arte Precolombino (US$6 for general admission, special guided tours are offered at 10 am), has a collection of more than 5,000 pre-Columbian pieces created between 7, 000 BC and the arrival of Spanish conquistadors in the 1500s. More than 700 of those objects, including pottery, textiles, and gold items, are presented in a way that treats them like art, not artifacts. The collection offers a comprehensive, but never overwhelming, overview and it’s a pleasure to spend time in such a well-lit and stylishly designed environment (the museum is in a restored colonial mansion). Items are displayed in chronological order and most include explanations in English. Don’t miss the well-curated gift shop if you’re in the market for clothes, textiles, jewelry, books, and more. 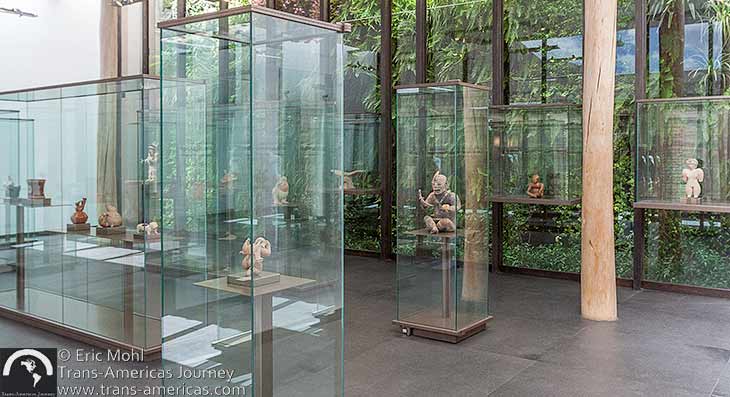 Casa del Alabado Museo de Arte Precolombino is one of our favorite museums in Latin America.

When we visited the Museo Nacional de Quito (free) it was an overwhelming jumble of treasures from 12,000 BC to the arrival of the Spanish in the 1500s including thousands of pieces of pottery, elaborate gold pieces, intentionally deformed skulls, ceremonial furniture, colonial religious painting, and much more.  Floor after floor was overflowing with bonafide treasures, but the warehouse-like feel and sometimes ham-handed displays didn’t do justice to the collection. A recent multi-year renovation has reportedly introduced a more tightly curated range of items and better displays. 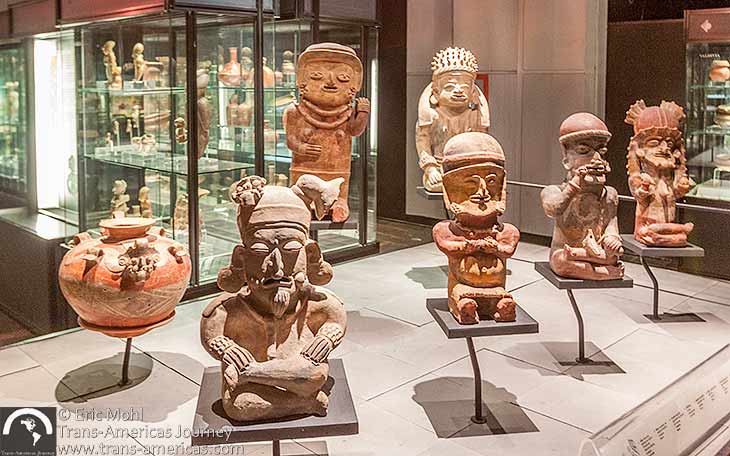 Just a few of the thousands and thousands of items in the National Museum in Quito.

The Museum of the City (US$3) is in an enormous building where wide-ranging permanent displays (Old San Juan de Dios Hospital, dioramas depicting ancient cultures in Quito) and rotating temporary exhibits. A highlight was the elaborate wood floor that showed a colonial map of Quito. 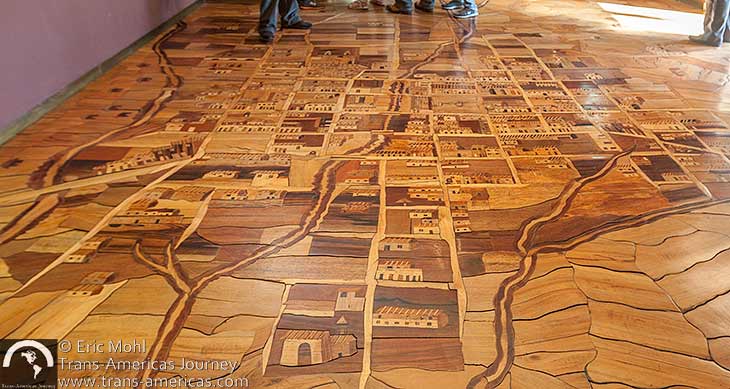 This wood floor in the Museum of the City replicates a colonial map of the city.

The Museo Casa Manuela Sáenz (US$4) tells the story of the revolutionary hero Simon Bolivar’s Ecuadorean mistress and co-conspirator. Personal items belonging to Manuela and to Bolivar are displayed on two levels of a restored home in the San Marcos neighborhood of Quito. Frankly, the museum does not do justice to this fascinating early feminist and rare female compatriot in South America’s liberation movement, but it’s a start.

Casa Museo Guayasamín (US$8) is well worth the price of admission. Located in the tranquil and stylish home of Ecuadorean artist Oswaldo Guayasamín, this collection showcases some of the best work produced by this politically-motivated contemporary art star in an intimate setting. The neighboring Capilla del Hombre focus on the artist’s lifelong examination of the suffering of Latin America’s indigenous poor and includes many moving and thought-provoking pieces. 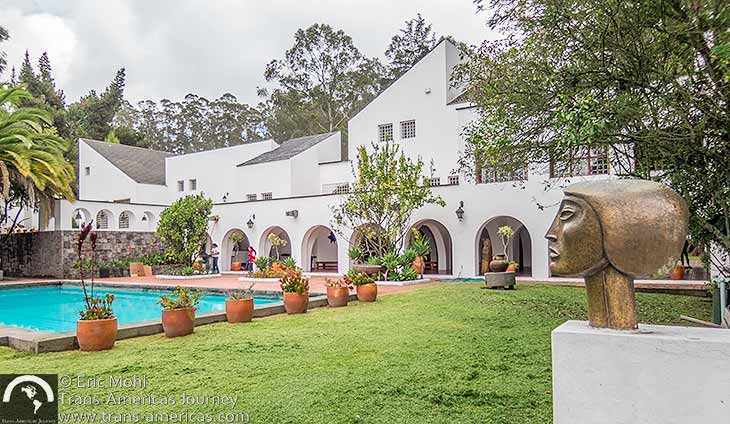 Casa Museo Guayasamín is a deep dive into the work of this revered Ecuadorean contemporary artist.

Museo del Carmen Alto (US$3) is a monastery that’s still home to a group of Carmelite nuns. Quito’s patron saint, Marianita de Jesus, was cloistered here. Areas of the structure, built in 1653, that aren’t being used by the nuns are now open to the public including a peaceful inner courtyard and rooms containing religious art. The original frescoes on the second floor are particularly impressive. If you have a sweet tooth, buy some of the candies made by the nuns. 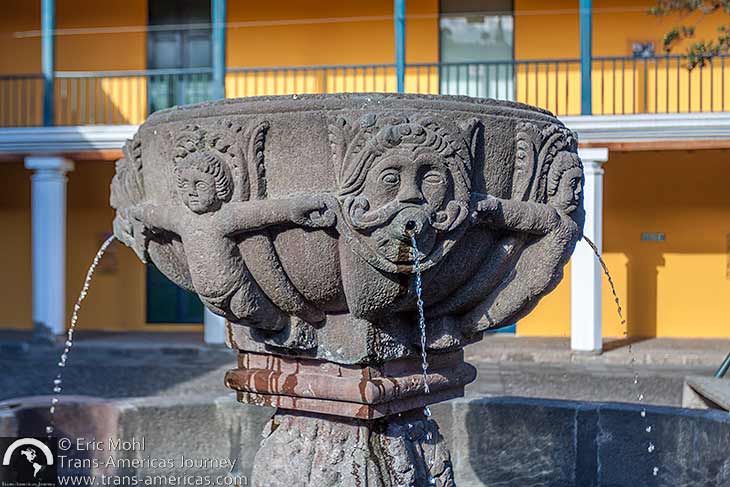 A cloister fountain in the Museo del Carmen Alto.

So-called Panama hats were actually created in Ecuador and hat making remains an honored tradition. Homero Ortega has emerged as a reputable source for good quality, traditional styles, and modern re-interpretations. There are a number of Homero Ortega stores in Quito including one on Plaza San Francisco.

Also on Plaza San Francisco is a sprawling cafe and shop called Tianguis. Located in one of the niches in the wall beneath the San Francisco church, this is the place to go to see a very comprehensive selection of Ecuadorean goods that make great gifts or keepsakes including textiles, pottery, Ecuadorean coffee, and chocolate.

For more than 100 years La Mundial has been making riding boots and today many of the world’s best professional riders wear them. Fun fact: their factory is located on the outskirts of Quito and you can visit it purchase a pair of shoes or boots (they now make everyday styles, not just riding styles). 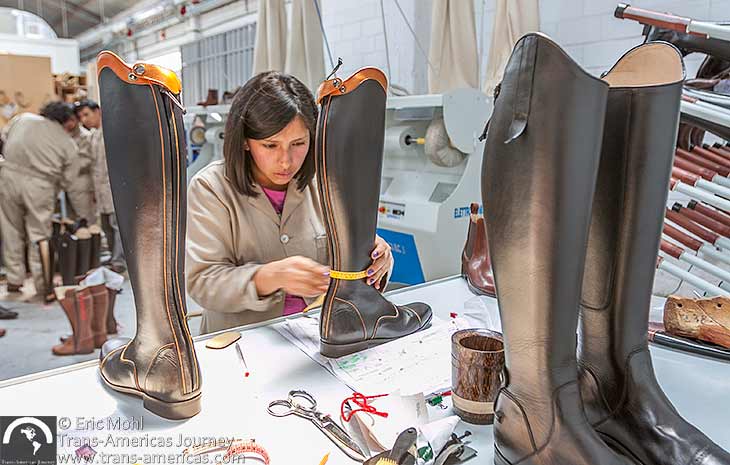 World-class riding boots (and more) are made and sold at La Mundial in Quito.

La Ronda is one of the oldest streets in Quito and its cobblestoned length is now lined with bars, restaurants, and artisan’s shops where you can buy Ecuadorean crafts, acclaimed local chocolate, and much more. 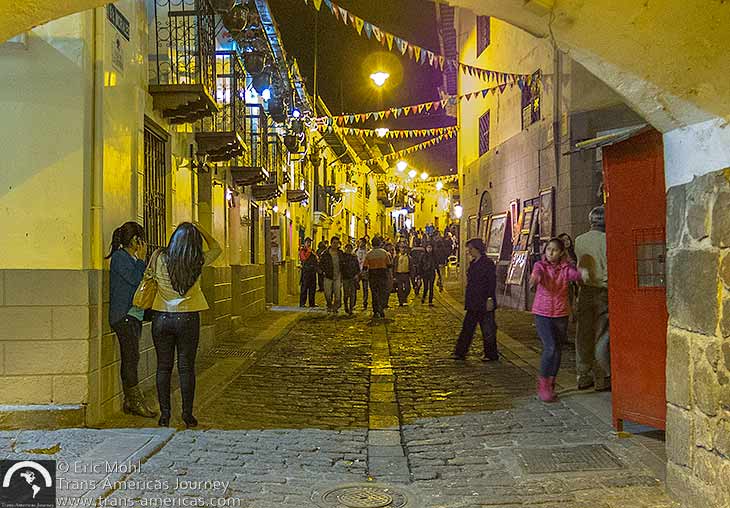 La Ronda is one of the oldest streets in Quito and is now home to popular restaurants, bars, and shops.

Even more things to do in and around Quito

On a clear day, take a ride on the TeleferiQo, a gondola system that was opened in 2005  and which travels nearly 3,000 feet to the top of the Pichincha Volcano which looms over Quito in around 20 minutes. Views during the ride and at the top are spectacular and include views of Cotopaxi, Antisana, and Cayambe volcanoes. 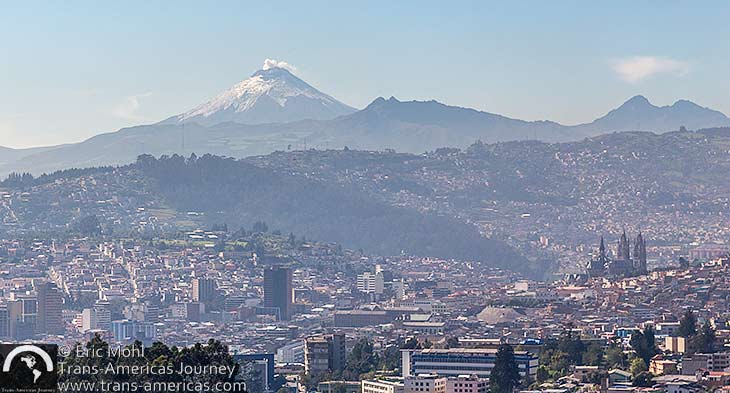 View of Quito with Cotopaxi Volcano in the background from near the bottom of the TeleferiQo.

Visit El Panecillo, a small volcanic mound in Quito, to see the 150 foot (45 meter) tall statue of a winged madonna which looks down on the city. She was made by a Spanish artist who crafted thousands of piece of aluminum to make the figure which you can walk into (ala the Statue of Liberty) for even better views. 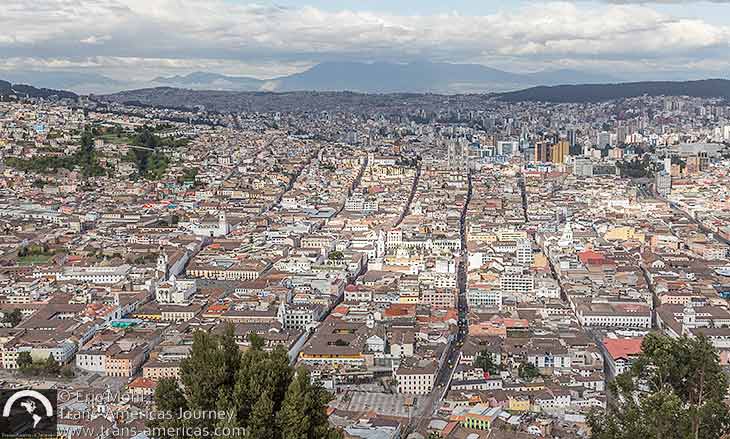 Quito spreads out in front of you from El Panecillo.

Arguably the most famous attraction in Quito is Mitad del Mundo, a complex that was built around the spot where the equator (allegedly) is located about 15 miles from the center of Quito. Yes, it’s kitschy and very Disneyland-esque, but it’s also good fun. Climb up the monument through floors with rudimentary displays of culture from various regions in Ecuador. On the roof deck, look down on folks taking goofy photos below, then join them to straddle the line in the ground that marks the equator (equator, Ecuador, get it?). It must be said that current thinking is that the actual equator travels a few hundred feet north of the line marked at Mitad del Mundo. To see a different, perhaps more accurate, line in the ground visit the nearby Museo Solar Intiñan. 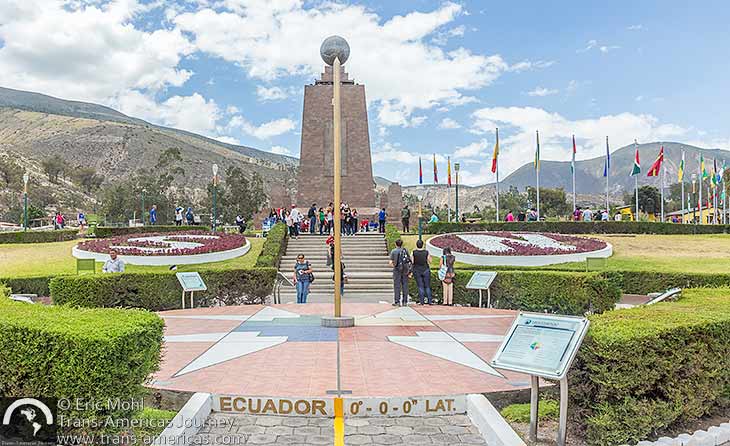 Head to Plaza de la Independencia on Monday mornings at 11 am sharp to see the elaborate 30-minute changing of the guard in front of the Presidential Palace complete with crisp uniforms, horses, a military band and more. 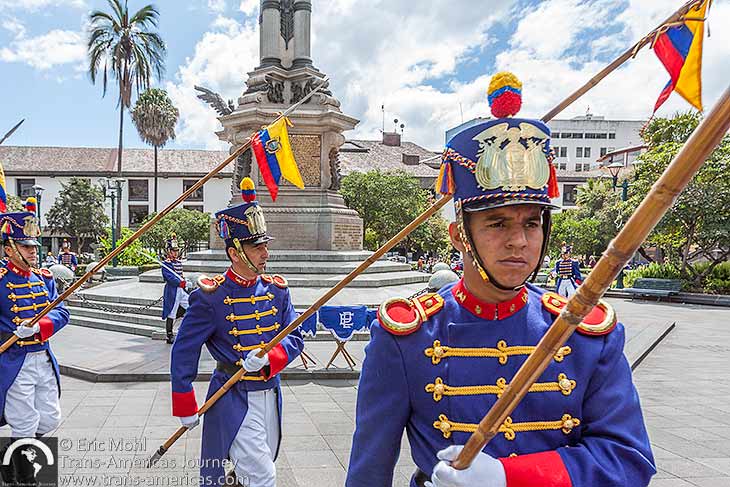 Every Monday you can watch the changing of the guard in front of the Presidential Palace in Quito.

Check out the weekly spectacle in our video, below.

The official currency of Ecuador is the US dollar.

If you’re arriving from lower elevations, be aware that the altitude in Quito may be a challenge at first. Walk slowly, drink a lot of water, and drink coca tea as well. It works.

The international airport in Quito, completed in 2013, is more pleasant than most but it is about 25 miles and 45 minutes from the center of the city.

Be on the lookout for issues of a locally produced magazine called Ñan. It’s reliably full of great information about travel in Quito and across Ecuador and it’s published in Spanish and in English.

A new subway system in Quito is currently predicted to be operational by July 2019.