City Travel Guide: Where to Drink in Bogotá, Colombia

The food scene in Bogotá is on fire and the drinking and bar scene isn’t too far behind with craft beers and lovingly made cocktails served in bars to suit anyone’s style. Our city travel guide about where to drink in Bogotá reveals the best watering holes in the Colombian capital.

Where to drink in Bogotá 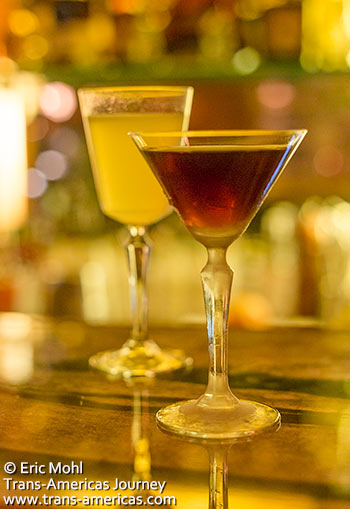 Bar Enano is the place to get a serious cocktail in an intimate space.

Bar Enano – The Spanish word enano loosely translates to dwarf in English and everything about Bar Enano, off the main dining room at Bistro el Bandido (which nails the French Bistro vibe and menu – order the coq au vin), is small. The handful of tables are tiny. The menu offers small bites. The antique tableware, exquisitely sourced from antique shops and estate sales in Medellin, is almost doll size. The cocktails, on the other hand, pack a big punch. The throwback issues of Playboy magazine are the icing on the cake at this intimate spot. 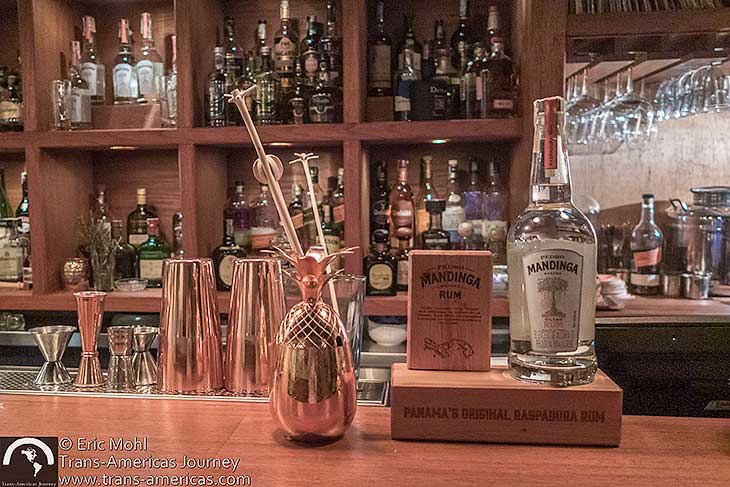 The bar at Pedro Mandinga Rum Bar in the Usaquen area of Bogotá.

Pedro Mandinga Rum Bar – In 2017, a historic three level building in the city’s Usaquen neighborhood was transformed into a tropical hideaway when this rum-focused bar opened its doors. Tropical upholstery, rattan furniture, soft lighting, and salsa music (on vinyl!) give this place a private beach club look and feel. The original is in Panama City and the rum is made in Panama using panela (not cane or molasses) which they get from organic farmers. Sip it straight, or try a cocktail made with housemade syrups and ice (27,000 COP or about US$8.50) We tried the complex and refreshing Panama Viejo which is an old fashioned made with rum and a bitters-infused ice cube. We also tried the smooth and rounded Pedroni which is a Negroni made with rum over a huge square ice cube. Plan your visit during happy hour (opening through 7 pm daily) for 13,000 COP (about US$4) cocktails. Wednesday is mojito night (learn to make one then drink it) and two Thursdays per month the bar offers rum tastings. 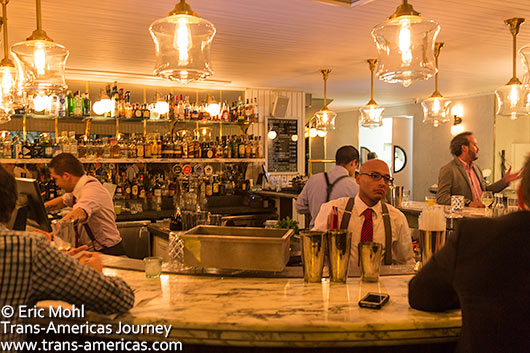 At Black Bear, it’s hard to tell who’s more serious about mixology: the bartenders or the patrons.

Black Bear – This place is so full of craft cocktails and the hipsters who love them that you may think you’ve teleported from Bogotá to Portland. There’s food here too but it’s the serious mixology that keeps this place packed. 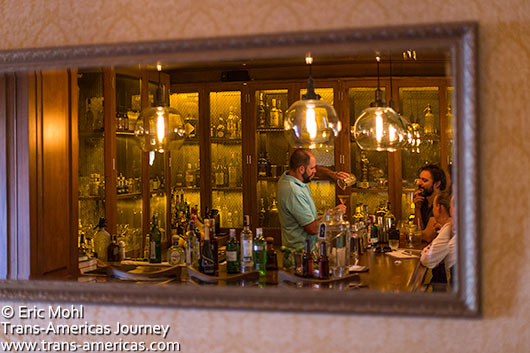 Bar 8yCuarto  – This six stool watering hole is helmed by Ronnie Schneider, a Venezuelan who calls himself a “Slow Drink Tender”. Armed with a cabinet full of homemade infusions and bitters, he experiments boldly, fails rarely, and delights his patrons with classy (but never pretentious) presentation with surprises in every sip. Whatever you do, don’t order a boring old beer. Located at Carrera 14 #86A-12 on the first floor of a house that’s been turned into a culinary and retail space. You will need to be buzzed into the front door which just adds to the speakeasy vibe. 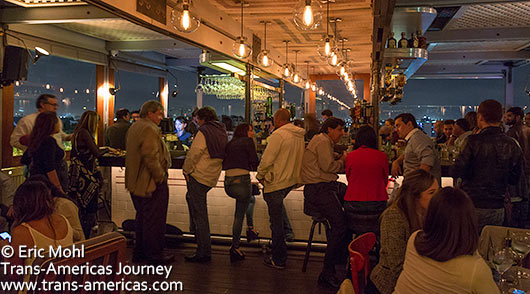 Apache Burger Bar – Created and operated by Chef Felipe Arizabaleta of Bistro el Bandido, Bar Enano and Bruto fame, this place is a hip watering hole on the roof of the even hipper Click Clack Hotel. Casual, sexy, and straightforward, you can get a beer, good wine, or a cocktail while enjoying a DJ and epic views of the city below. Food (salads, sandwiches, Chicago style hot dogs and, of course, burgers) is also available. 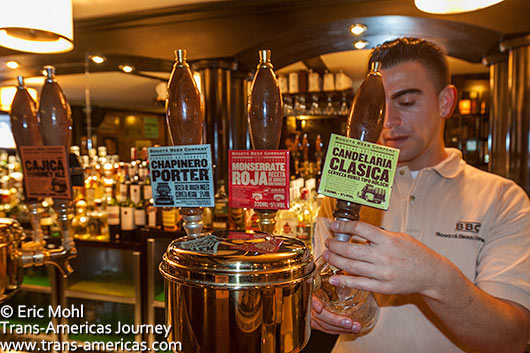 Bogotá Beer Company – Lovingly referred to as just “BBC”, this is the biggest little craft brewery in Colombia (in 2015 BBC was purchased by Ambev, the Brazilian affiliate of Anheuser-Busch Imbev, but little has changed on the ground). There are nearly 30 BBC pubs across Colombia where a range of craft beers on tap and in bottles can be enjoyed along with food and music. Happy hour prices are offered Monday to Friday between noon and 7 pm which means you can enjoy a pint of world-class craft beer for about US$2.25 including tax and tip. Really. 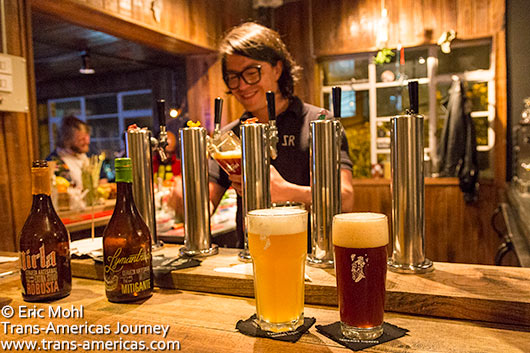 Serious beer in a frat house atmosphere at the Statua Rota brew pub.

Statua Rota – BBC is the big boy of Colombian craft beers, but there are many small producers doing good work as well. We recommend a visit to Statua Rota (Broken Statue). Two brothers and a friend started the brewery and despite their youth and heavy metal wardrobes, they’re very serious about what they do. Their European style beers are solid and include a wheat beer brewed with lulo (a sweet/tart fruit) and coriander seeds and a bock beer called Michael Jackson because, according to the brewmaster, it has a white soul but it looks black. UPDATE: this brewpub has moved to bigger and slicker digs and is now offering an expanded menu and much more indoor and outdoor seating.

Lateral Beer – Located in a converted garage on Calle 65 between Chapinero and Zona G, this tiny craft beer option is only open at night. They serve pints on tap (11,000 COP or about US$3.50) and when we visited the choices were between an amber and a blonde, so we tried them both (they also had Club Colombia on tap, but meh). The lightly carbonated, golden-colored blonde was very easy-drinking with a light and thin start and a finish with just a bit of bitterness. The amber was very dark in color (almost purple), hoppy and fruity. Fries and wings were also on offer if you get hungry between beers. 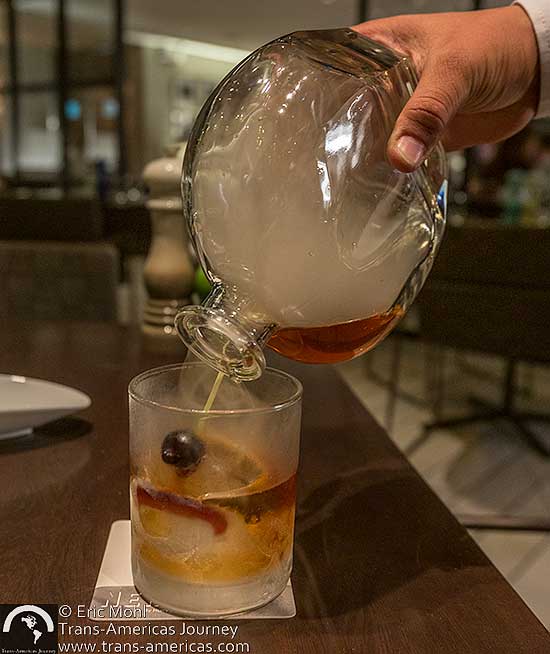 The dramatic (and delicious) Bourbon Smoke cocktail at Nemo.

Nemo – If you ask us, the newest restaurant from Colombian celebrity chef Harry Sasson should be as famous for its bar program as for its (very, very impressive) food. Bartenders here offer all the classic cocktails and eight house cocktails (28,000 to 32,000 COP or about US$10). These include the Bourbon Smoke made with Bullit bourbon smoked in a bottle and poured at your table over an enormous round ice cube. Nemo also has a very, very long wine list and dozens of bottles are offered by the 1/4, 1/2, or full bottle at excellent prices.

Xarcuteria – The best happy hour in Bogotá, by far, is at Xarcuteria where cocktails are half price and wine and beer (including craft beer) is 30% off every day from 4:30 pm to 7:30 pm and again from 10:30 pm to closing time. Happy hour is not offered on Sundays, but you’ll need a day to recover anyway. UPDATE: Xarcuteria has a new owner and happy hour details may have changed. 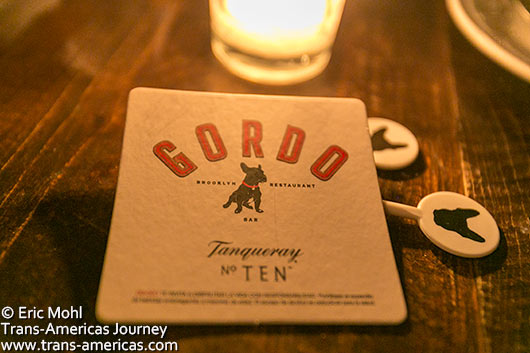 Gordo Brooklyn Bar & Restaurant –  Colombian chef Daniel Castaño worked with Mario Batali in New York City for nearly a decade. When he returned to Colombia to begin opening restaurants of his own he missed the bars he used to visit near his home in Brooklyn, so he created a Brooklyn bar in Bogotá. Unlike many places in the capital, the bar at Gordo is huge and inviting. There are couches and areas to simply hang out in. There’s even a pressed tin ceiling that came straight from Brooklyn. The bartender is skilled, they make their own tonic water and vermouth, and, if you’re lucky, Daniel might be on a barstool next to you. The menu is fabulous too (including a burger made with a hand-ground beef patty served on a homemade brioche bun), so come hungry. Read more about how Daniel created a Brooklyn bar in Bogotá in our story about Gordo for The Latin Kitchen. 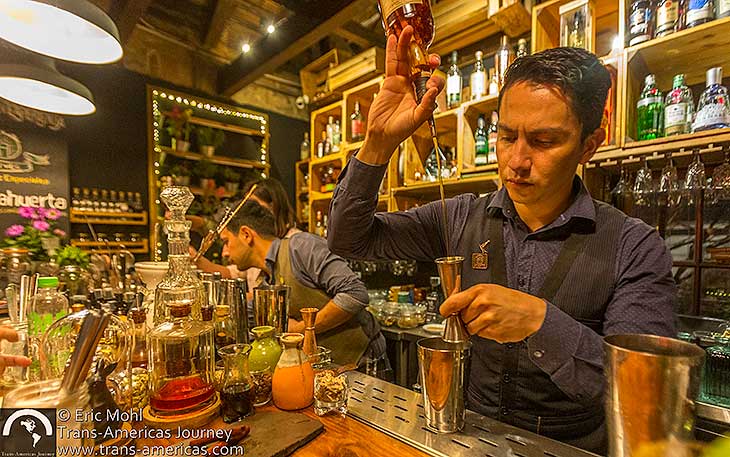 Bartenders ply their craft at lightning speed at La Huerta.

La Huerta Coctelería Artesenal – This long, narrow, tiny bar turns out more than 20 different types of cocktail, nine different gin and tonics, mocktails, and more at lightning speed. Many of the options are very much on the sweet side of the spectrum and bartenders may spend too much time with their tweezers, but if you’re into fruity drinks served with style in a wide range of stemware this is your place. You can also get a punch bowl full of booze or order a “mystery cocktail” by telling your server what you like (bitter, bubbly, brown, for example) and seeing what comes back. There’s a DJ on weekends.