In Nicaragua baseball gives futbol a run for the money, as we found out in Matagalpa where a chance encounter lead to bloody Marys, a very Latin take on America’s pastime, and a few minutes with the Cuban national team.

Since 1976 there have been 23 Nicaraguan players on Major League Baseball (MLB) teams in the US including four Nicaraguan players who are still playing. Most famous among them is Dennis Martinez who pitched for the Baltimore Orioles, Cleveland Indians, Seattle Mariners, Montreal Expos, and the Atlanta Braves during his 22 year career.

Martinez was the first Nicaraguan to play in the major leagues and was nicknamed El Presidente by Nicaraguan fans. He helped the Orioles win the World Series in 1983 and in 1991 he pitched a perfect game. He’s still a big, big deal in his home country and a big reason why baseball rules here. 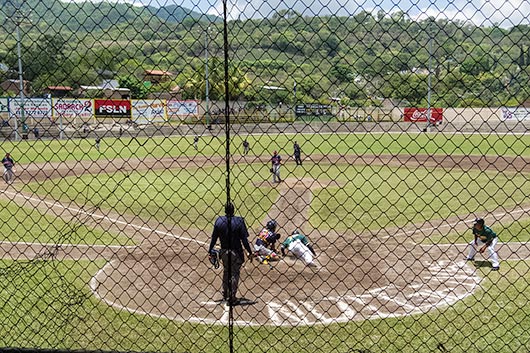 The Matagalpa Indigenas getting ready to cream the visiting team.

Why the answer is always “yes”

Given the country’s love of America’s pastime we really wanted to see a baseball game in Nicaragua. We got our first chance in Matagalpa when the Matagalpa Indigenas faced off against an inferior visiting team whose name we’ve forgotten.

The match up took place in Matagalpa’s simple concrete stadium with a serviceable baseball diamond where we got tickets in the reserved and elevated area directly behind home plate for US$4 each. Tickets for the general admission covered bleachers were going for less than half that and the game had drawn a medium-sized but enthusiastic crowd of families and couples. 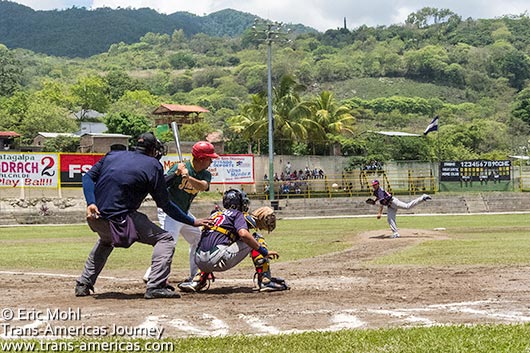 We settled into our “fancy” seats with about 50 other people, mostly area businessmen, got a cold beer for a buck, and prepared to enjoy our first baseball game in ages. Imagine our surprise, however, when the teams reached the seventh inning stretch and called it quits. Turns out, Sunday baseball match ups in Nicaragua are played out in two seven inning games.

The break between games gave us a chance to make some friends and we were soon chatting with Don Chaco (owner of a good cheap eats restaurant in Matagalpa of the same name) and his buddy Don Marcelino Castro. Did we mention that they were mixing bloody Marys? 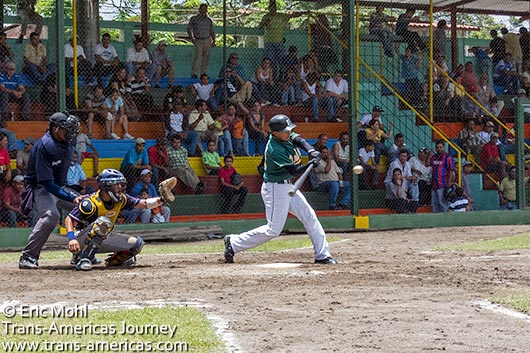 Don Marcelino’s family has grown coffee in the hills around Matagalpa for generations and was one of the wealthiest families in the area. However, during the revolution their land and real estate was confiscated and Don Marcelino and his sons are now slowly bringing their Beneficio de Cafe Las Tejas coffee business back on track and they’ve managed to get some of their confiscated properties back as well. 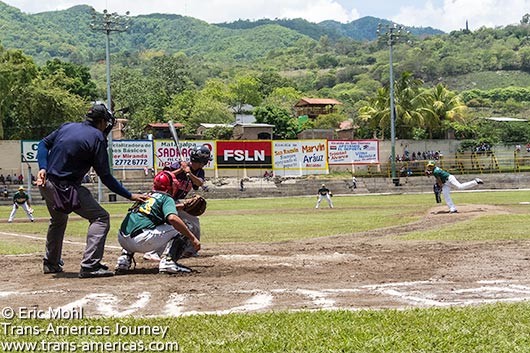 Soccer should be worried in Nicaragua.

Despite Don Marcelino’s best efforts he wasn’t able to get us seats in the reserved section for the national team game vs. Cuba game so we settled for general admission tickets. The stadium was packed way past capacity and the crush was exacerbated by a large number of food and drink vendors including ladies selling hamburgers, kids hawking potato chips, and even pizza (sort of) by the slice sold by a man who announced his wares by making a chillingly authentic rooster call. 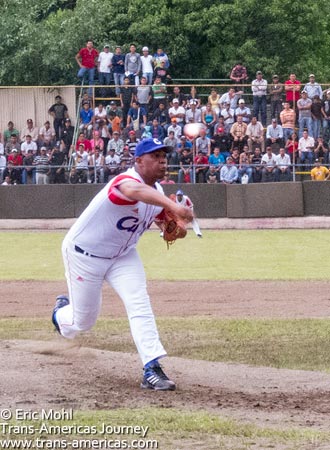 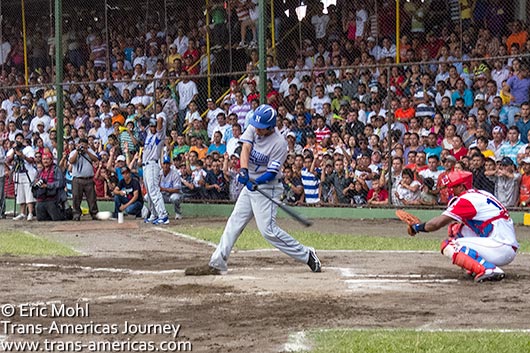 As we jockeyed for position against the chain link fence that separated the crowd from the players it started to rain–at first lightly, but before the first inning was finished the officials called the game with Nicaragua scoring the one and only run. 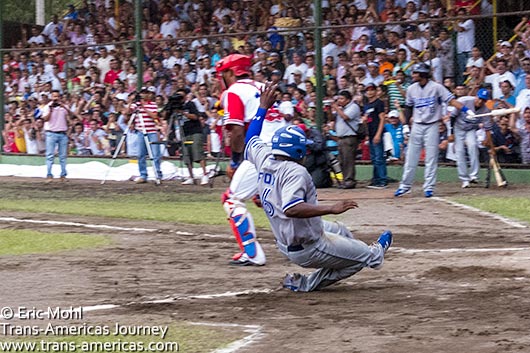 Random question: Why is it seem like some of the best non US baseball players come from countries that are not fans of the US (Cuba, Venezuela, Nicaragua)? Feel free to submit your global baseball theories in the comments section below.