Welcome to part 1 in our Best of the Trans-Americas Journey 2014 series of posts. Part 1 is all about the Top Travel Adventures of the past year of travel on our little road trip through the Americas including SCUBA diving with whale sharks and hammerheads in the Galapagos Islands, rescuing a drowning monkey in the Amazon, and being spit on by a shaman in the Andes. Part 2 covers the Best Food & Beverages of 2014, part 3 covers the Best Hotels of the year and part 4 tells you all about our Top Travel Gear of the Year.

Now, in no particular order, here are the… 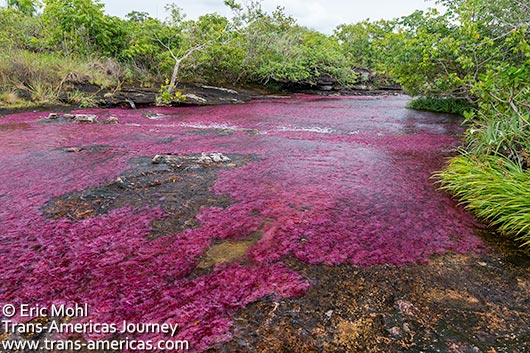 Best river trip: First of all, its nickname is the “Liquid Rainbow.” Second of all, it’s in an area of Colombia that’s only recently became FARC-free enough to visit. Third? Who needs a third? In 2014 we made it to this one-of-a-kind river on assignment for BBC Travell with Eco Turismo Macarena. Caño Cristales lived up to the hype with flowing water filled with waves of vibrant reds, greens, yellows, and blues caused by a water plant unique to this area. We were also impressed with the quality of the local guides, the environmental protections that are in place, and the truly community-based tourism that’s going on in the gateway town of La Macarena. 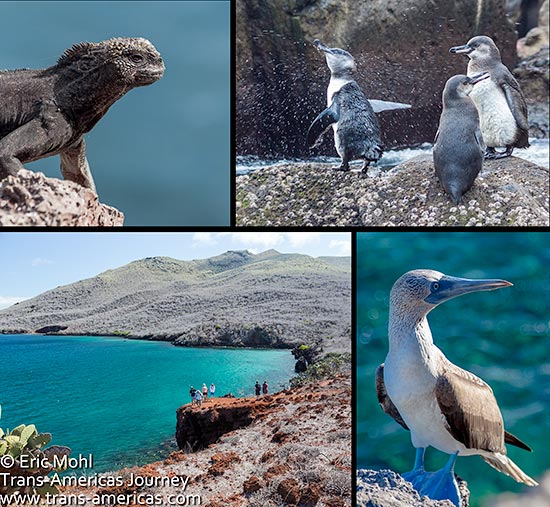 Some of the friends we made in the Galapagos Islands in Ecuador.

Best adventure destination: 2014 was the year that we got to travel to the Galapagos Islands in Ecuador not once but TWICE. During the first visit we spent nine days in the islands including a week on board the M/Y Grace so that we could produce our story about the yacht once owned and honeymooned on by Grace Kelly, for the Biography channel’s website. A highlight of that trip was the discovery of the best snorkeling site of the year: Punto Vicente Roca off Isabela Island where we bobbed in the water as sea turtles, penguins, sea lions, dozens of species of fish, a shark or two, and much more.

Our second visit to the Galapagos Islands took an even more adventurous turn with a week on board the very, VERY good value M/Y Eric followed by a week on board her sister ship, the M/V Galapagos Sky live aboard dive boat to produce our story about luxury SCUBA adventures in the Galapagos. That’s when we discovered the best SCUBA diving site of the year: Darwin and Wolf Islands, in the far north of the Galapagos archipelago, where we spent hours underwater with hundreds of scalloped hammerhead sharks and, incredibly, a few whales sharks and manta rays even though it wasn’t prime season for spotting those species. 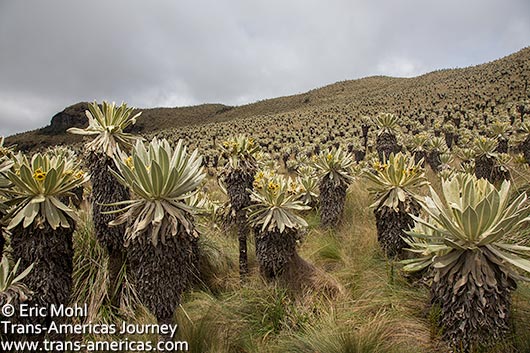 Best under-visited national park: Ecuador has more than 30 national parks, ecological preserves, and wildlife refuges. In 2012, President Rafael Correa waived the entry fee to all of them (except Galapagos Islands National Park) in an effort to get more Ecuadorans out into their wild spaces. However, many parks in Ecuador are still virtually visitor free. Take El Angel Ecological Reserve in northern Ecuador, for example. Despite containing some of the country’s most gorgeous high-altitude páramo, including three of the four species of Seuss-like frailejon plants on the planet and the world’s only known stand of a certain species of polylepis tree, we saw a grand total of five other people in this stunning park. 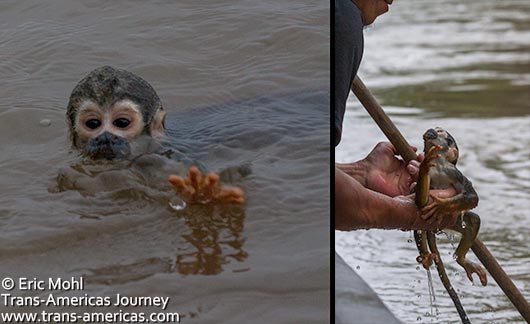 Monkey rescue operation in the Amazon in Ecuador.

Best wild animal rescue: We were motoring slowly along the Napo River in Ecuador’s Amazon Basin, happily observing a large troupe of squirrel monkeys in the trees at the water’s edge, when we heard a small splash followed by frantic screeching. Then we saw a tiny monkey being swept down river. Our guide, Fredy Alvarado, who operates Pangea Xpeditions and was working as our guide on the Anakonda Amazon river boat we were traveling on, dipped an oar into the water just as the monkey was pulled underwater once again. When it’s drenched, furry head finally popped up the animal reached for the oar in exactly the way a drowning human would. Safely on our boat, the dripping monkey scrambled to a far corner as we motored to the shore where his troupe was waiting for his return. Fredy had to pry the frightened monkey off the boat in order to release him and he got a bite on the hand for his trouble. 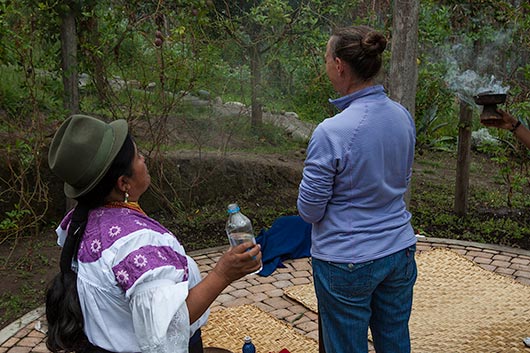 Karen getting spit on by a shaman in Ecuador.

Best adventure in alternative healing: Sacha Ji Wellness Hotel, near Otavalo, Ecuador, is a rare example of eco-friendly construction (living roofs, rain water collection, solar panels, tire foundations) and a posh yoga and wellness retreat all in the shadow of massive volcanoes. The innovative owner has also harnessed the power of the local Kichwa community’s holistic healing traditions and guests can sign up for a cleansing by a local female shaman named Rosa. Karen took off her shoes as Rosa arranged the tools of her trade: volcanic rocks, river rocks, kindling, two huge bunches of local herbs and branches, a pot for burning aromatic wood, a small gourd with liquid in it and two plastic bottles. Rosa spit liquid into Karen’s face and gently whacked her with herbs and branches. Wood was burned and smoke was read to determine the amount of “bad energy” that needed to be cleaned out (apparently, a lot) followed by more spitting before Rosa put some oil on Karen’s scalp and clasped her head while chanting about strong, clean energy. The whole thing was over in 15 minutes and was oddly relaxing despite the smoke and spit. 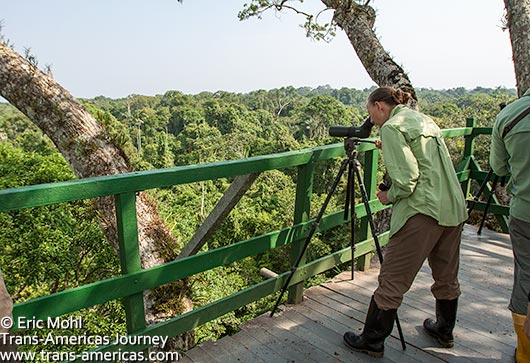 Best reason to get up early: Napo Wildlife Center Ecolodge, built, run and managed by members of the local Kichwa Anangu community in the Yasuni region of the Amazon Basin in Ecuador, offers many ways to get close to the toucans, giant otters, caimans, and monkeys on their vast jungle property. One of the best is their canopy observation platform. A 10 minute canoe paddle and 15 minute walk takes you from the lodge to the 130 foot (40 meter) tower. Climb the metal stairs to the platform at the top, carefully built around a massive ceiba tree, and you’ve reached the perfect place to look into the tree tops and down into the jungle. In the early morning hours we saw ivory billed toucans, a three-toed sloth, blue and yellow macaws in flight, squirrel monkeys, white front capuchin monkeys, and more. Bring your binoculars and take advantage of the spotting scopes provided by the guides. And get more in our full review of Napo Wildlife Center for LuxuryLatinAmerica. 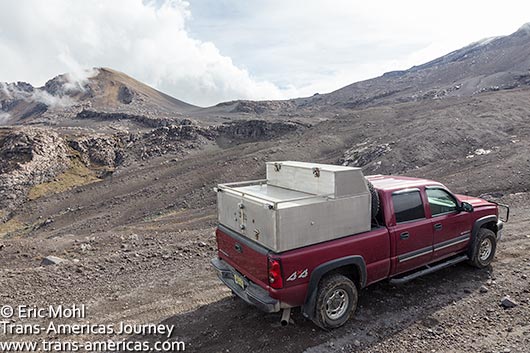 Best national park drive: It’s not every day that you get the chance to drive your vehicle to over 15,500 feet (4,724 meters). To put that into perspective, that’s more than 1,000 feet (300 meters) higher than the top of Mount Whitney which is the highest point in the lower 48 in the US. In Los Nevados National Park in Colombia you can drive that high while checking out the Nevado del Ruiz Volcano (one of the most active in the world) and Andean condors (many of whom were transplanted from the San Diego Zoo to repopulate the park) soaring overhead. 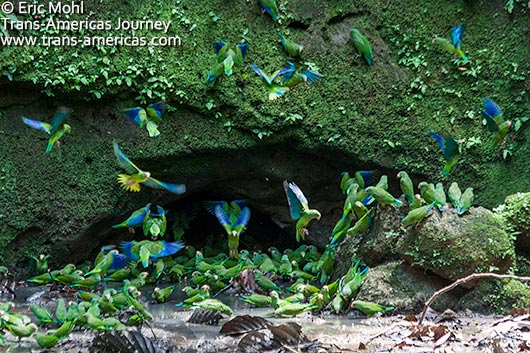 Birds swarm a clay lick in the Amazon Basin in Ecuador.

Best feeding frenzy: There are a number of clay licks where birds congregate to greedily eat soil rich in essential minerals in the Amazon Basin in Ecuador. The one that attracts both parrots and macaws requires a short hike inland from the Napo River to a comfortable shelter/blind where we waited silently for two hours while the skittish birds worked up the courage to come to the ground to take in the minerals they need. Eventually hundreds (thousands?) of mealy parrots and some scarlet-shouldered parrotlettes descended. The sound of their wings and calls was deafening and even though the macaws remained safely in the trees above our heads, the spectacle was impressive. 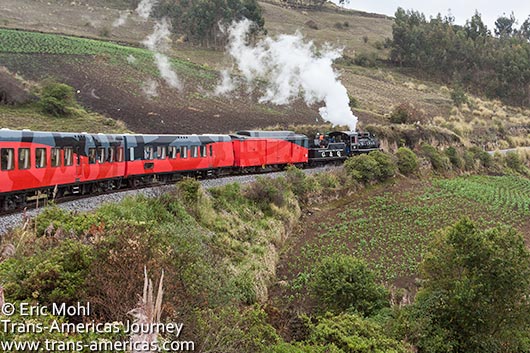 The Tren Crucero train in Ecuador.

Best adventure on rails: Train trips don’t generally fall into the category of adventure travel unless you’re on a train that somehow navigates its way over a massive stone obstacle ominously called the Devil’s Nose and includes stops that let you meet the last glacial ice collector in the country and watch traditionally dressed women haggle for guinea pigs (aka, dinner) in a local weekly market. Passengers on Ecuador’s Tren Crucero get all that and more during the four-day journey from the Andes to the Pacific (or vice versa). Get more in our story about the Tren Crucero train trip for the Dallas Morning News. 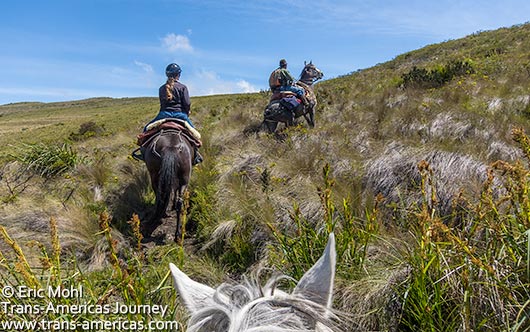 Best horseback riding: Hacienda Zuleta, a historic farm-turned luxury hotel dating back to the 1600s in northern Ecuador, should be on every hotel and food lovers’ list. If you’re also a horse lover then make your reservation now. Zuleta’s stable is filled with their own breed, called Zuleteños, which are a mix of thoroughbred, quarter horse, and Andalusian carefully crafted over the years to produce smart, gentle and beautiful horses. The tack is all hand made locally, the volcano-filled geography is gorgeous to ride through, and the guides are capable and fun to be with whether you’re out for an hour or a week. Bonus: sore muscles are easily soothed by the hot water bottles and bath salts provided in each guest room at Hacienda Zuleta.