Welcome to Part 2 in our Best Of 2011 series of posts. Part 2 is all about the Best Food & Beverages of the year including bread in Honduras, cow udder in El Salvador, and the best beer in Central America. Part 1 covers the Top Travel Adventures of 2011 and part 3 covers the Best Hotels of the Year. Part 4 includes the Top Travel Gear of the Year.

Yes, end of year round-ups can be lame. On the other hand, they can also be a valuable chance for us to look back on the year that was and remember just how damn lucky we are. Done right, an end of year round-up can also be a quick and easy way for you to get a dose of the best tips, tricks and truths that made our Trans-Americas Journey travels so special in 2011. Maybe, just maybe, you’ll hit the road yourself in 2012 (or 2013, no pressure).

First, a few relevant stats. In 2011 the Trans-Americas Journey thoroughly explored four, albeit very small, countries including Belize, Guatemala, Honduras, and El Salvador. We drove 8,055 miles (12,963 km) and spent US$2,300 on fuel. We had one flat tire (after driving over a nail in Copan, Honduras) and bounced over about a billion topes/tumulos (vicious Latin American speed bumps) and through twice that many pot holes.

We’ve also eaten nearly all our meals in restaurants of one description or another from street food stalls to bustling markets to multi-star restaurants. In no particular order, here are some of the best bites and top tipples that made all that time on the road even tastier.

You will notice that this list is significantly shorter than our Best Food & Beverages of 2010 list. Honestly, that’s because we didn’t spend any time in Mexico this year. You just can’t beat Mexico for spectacular food. Still, we managed to eat all right.

Best ice cream: Sin Rival truly is without rival. With locations all over El Salvador, this mini-chain, which started out as one street cart, offers all-natural flavor bombs of goodness that comes satisfyingly close to gelato. 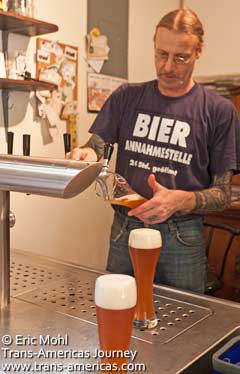 Best beer in Central America: Tomas Wagner is serious about beer. Serious enough to drive 10 miles (16 km) for his spring water. Serious enough to wear a lab coat while he brews. Serious enough to import all of his gear and ingredients from his native Germany (where he’s won awards for his beers). None of that would be remarkable in Amsterdam or Portland or Sydney but Tomas is brewing artisanal, strictly German style beer in Copán, Honduras—a small town best known for its neighboring Mayan ruins of the same name. Sol de Copán Brew Pub is not in your guidebook (yet) and the sign is easy to miss so ask anyone in town and look for the building with the turrets. We were tipped off to the existence of this truly delicious micro-brewed beer by the border agent we made friends with when I crossed into Honduras from Guatemala. He made me promise we would go see “the German” while in Copán and that we did, three nights in a row.

Best steak: Overall, the food in Guatemala did not thrill us. Except for the steak served at a restaurant called Guajimbo on the main drag in the town of Panajachel on Lake Atitlán. It’s not the cheapest restaurant in town by a long shot, but for 72Q (about US$9) the tender, juicy expertly grilled beef with chimichuri and vegetables is so worth it. And did we mention the awesome basket of garlic bread that comes with it?  Add that in and you’ve got all the fixin’s for a five star steak sandwiches. 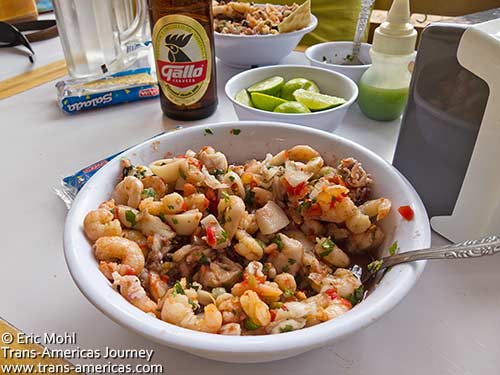 Best ceviche: Okay, there was one more dish that wowed us in Guatemala. What started out as a humble street cart has morphed into not one but two Los Chavos restaurants (both in Zone 5) in Guatemala City. They serve up plenty of cooked seafood dishes but the real reason to come is the ceviche. You choose your ingredients (fish, shrimp, calamari, etc) and your size and they whip up a bowl of unbelievably fresh fish perfectly seasoned and marinated. A tiny bowl of seafood bisque is the perfect amuse bouche. At 100Q (about US$13) for a large ceviche which is big enough to share, it’s reasonably priced too. 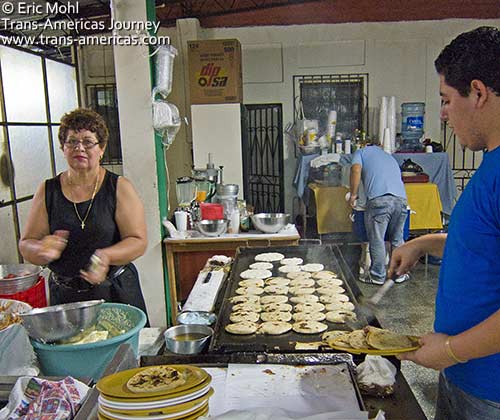 Pupusas like these are the delicoius fuel of El Savador.

Best pupusas: Take a palm-full of masa (corn or rice paste), form it into a ball, spoon in a dollop of filling, then flatten it and grill it on a hot griddle and you’ve got yourself a pupusa. It’s basically the national food of El Salvador, usually filled with chicharron (fried pork), beans, cheese, loroco (see below) or a shredded squash called ayote or any combination of said ingredients. After nearly three months in El Salvador (and hundreds of pupusas later) we can say that (in our humble opinion) the best made, best priced examples of this ubiquitous food are found at La Unica, a large, bustling, bright pupuseria which hunkers down behind the church in the square in Antigua Cuscutlan, a neighborhood in the capital San Salvador. Antigua Cuscutlan is known for having some of the best pupusas in El Salvador and there must be a dozen or more pupuserias competing for your attention within a 10 block area. Many swear by a nearby much fancier pupuseria that is certainly the place to go if you want ingredients that go beyond the usual suspects (like jalapeños and mozzarella cheese). They’ll even give you a knife and fork (!?!?) to eat your gourmet pupusa with. However, we’re traditionalist who prefer the classic ingredients and using our hands.

Best chic bar surprise: There are many reasons to visit Gracias, Honduras, including great hiking in Celaque National Park and great culture in the heart of an area still inhabited by the Lencas, the largest indigenous group in Honduras. What we weren’t expecting was a cool bar. Then we were tipped off to Kafe Kandil which has a loungy vibe, good music, original art on the walls and properly made cocktails which attracts a fascinating crowd of young local hipsters, Peace Corps volunteers and couples on dates. Read more in our travel feature about Gracias for the Minneapolis Star Tribune. 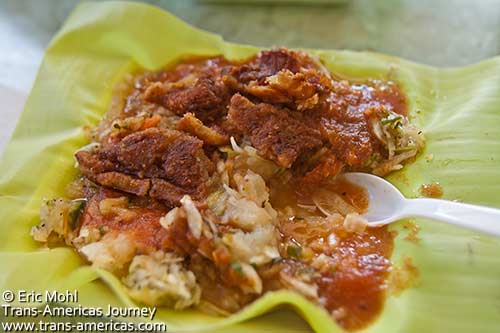 Best unlikely combination: Steam some yuca (aka cassava), make a spicy sauce, pickle some shredded squash, then pile it all onto a banana leaf and top it with chunks of rich, juicy fried pork and you’ve got yuca y chicharrón, a staple in El Salvador.

Best bread: So the Kafe Kandil bar in Gracias, Honduras was a surprise. Equally unexpected? A whole-grain, nutty, chewy loaf of crusty home made bread (available in whole or half loaves). You can thank Lizeth Perdono, owner and chef at Rincon Graciana which is the only restaurant in town that serves traditional Lencan food and the only place in all of Honduras to get bread like this.

Best everyday local ingredient: Loroco. This flower bud is a staple in El Salvador, particularly in pupusas. It tastes like asparagus.