Welcome to part 3 in our Best of the Trans-Americas Journey 2015 series of posts. Part 3 is our guide to the Best Hotels we stayed at during the past year of travel on our little road trip through the Americas including where to sleep in Mick Jagger’s bed in Peru,  the most dramatic check-in in Ecuador, and the best Bed & Beer in Colombia. Part 1 covers the Top Travel Adventures of 2015, part 2 covers the Best Food & Beverages of the year and part 4 tells you all about our Top Travel Gear of the Year.

In 2015 the Trans-Americas Journey explored Colombia, Ecuador and Peru and we drove 7,210 miles (11,603 km) doing it. Want more geeky road trip numbers like how much money we’ve spent on gas and how many borders we’ve driven over? Check out the our Trip Facts & Figures page.

Now, in no particular order, here’s our travel guide to the best hotels in Colombia, Ecuador, and Peru of 2015. 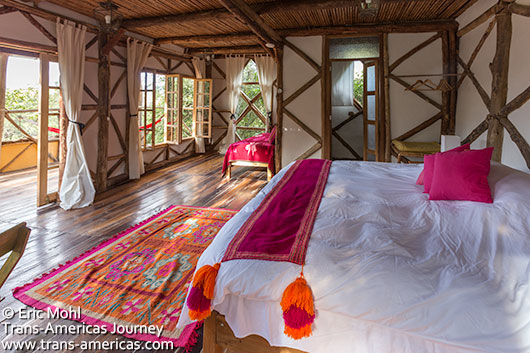 The upstairs suite at the Kentitambo Hotel in Peru.

Best bohemichic hotel: The indigenous Quechua word “kenti” means “hummingbird”. The Quechua word “tambo” means inn. The Kentitambo Hotel, near Leymebamba in Peru, lives up to the name with a hummingbird filled garden surrounding its two large suites. Cobblestone paths wind through the lush flowers. Owner Adriana Von Hagen has created two relaxed and stylish suites, one upstairs and one downstairs, which feature vibrant textiles, lots of sunlight, a porch with a hammock, small deer antlers used as towel hooks, and gleaming wood floors. Right across the street is the excellent Museo Leymebamba which houses a collection of artifacts, including 200 mummies. 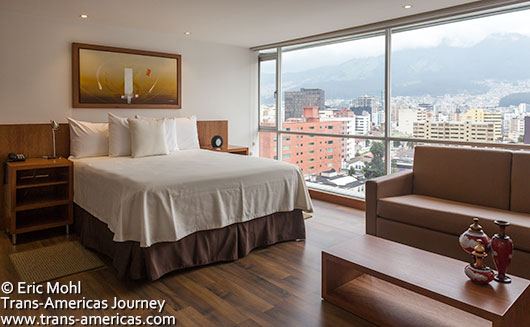 A mid-range winner in Quito, Ecuador.

Best new mid range hotel in Quito: Hotel Zen Suites is conveniently located between the La Floresta and Mariscal neighborhoods of Quito, Ecuador just 10 minutes by (very affordable) taxi to the city’s colonial center which was part of the very first group of cities inscribed as a UNESCO World Heritage site way back in 1978. Most of the 47 rooms at the hotel feature great views of the city skyline and surrounding Andes mountains from a wall of floor to ceiling windows and some rooms have private patios. All rooms have plush bedding, rain shower heads, and mini fridges. Rooms on the 8th floor have small balconies.There’s also a small but effective gym and a business center. Coffee and tea are available all day and staff members speak English (not always a given in Ecuador). Rates include a full breakfast buffet and it’s much cheaper than similarly appointed hotels in the area. UPDATE: this hotel is now called the Best Western Zen Hotel Zen but is not affiliated with the Best Western hotel chain.
Book Now 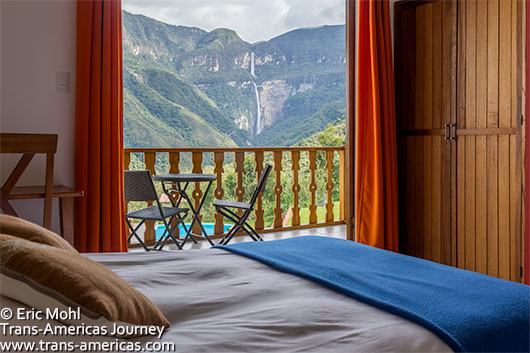 At Gocta Lodge in Peru you don’t even have to get out of bed for views of the fifth longest free-flowing waterfall drop in the world.

Best view from bed: The 2,531 foot (771 meter) high Gocta Waterfall, in the town of Cocachimba in northern Peru, has the fifth longest free-falling waterfall drop in the world, which is to say it’s an impressive sight. Make the most of it by booking a room at the sleek and stylish Gocta Lodge where all 10 rooms afford views of the cascade right from bed. Get a room on the second floor for more privacy so you can keep your curtains open all the time.
Book Now 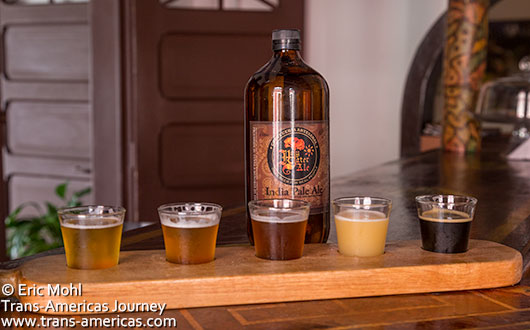 Bed and beer at this hostel in Colombia.

Best bed and beer: The town of Buga, Colombia is most famous as the site of what some perceive as a miracle. Pilgrims come to the church in Buga regularly. Those who worship good beer should visit as well because Buga is home to Buga Hostal and the Holy Water Ale Cafe, Colombia’s only Bed & Beer. The hostel is affordable and fine. The brew pub attached to the hostel is great, offering a range of delicious beers on tap made by German owner and brew master Stefan Schnur. Bonus: the pizza is legit too.
Book Now 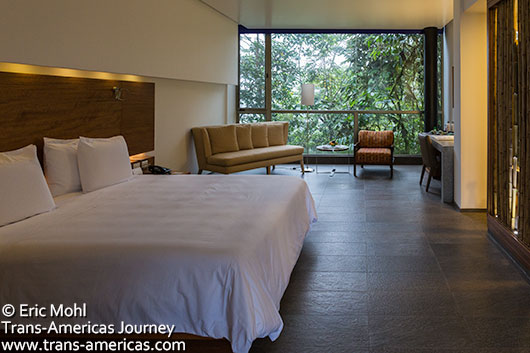 Curtains in the rooms at Mashpi Eco Lodge in Ecuador raise and lower mechanically and add to the drama of the rainforest outside.

Best curtains: The 22 rooms at Masphi Eco Lodge, the most luxurious way to stay in the rainforest in Ecuador, each have a different, vibrantly colored, massive remote-control operated curtain over a wall of windows. Upon check in, the curtain is raised to reveal a stunning view of the rain forest (and its inhabitants) just outside your room. Your stay just gets more stunning from there.
Book Now 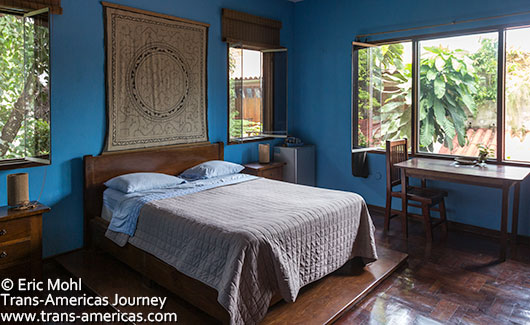 Mick Jagger slept here and you can too.

Best place to sleep in Mick Jagger’s bed: Actors, crew and director Werner Herzog descended on the Peruvian Amazon to film the movie “Fitzcarraldo” which tells the crazy real life tale of Peruvian rubber baron Carlos Fermín Fitzcarrald who moved a 320 ton ship over a mountain to reach a different Amazon tributary. Shooting in the jungle took years. Cast members, including Mick Jagger, came and went.  Somehow, the movie was made (if you haven’t seen it you should fix that). Through it all, cast and crew used a sprawling house in Iquitos, Peru as their base. Today, the executive producer of the movie, Walter Saxer, runs the house as La Casa Fitzcarraldo hotel. You can sleep in Mick Jagger’s room or in the bungalow where Werner Herzog and his wife lived (and fought). Don’t miss the chance to chat with Walter to gain even more incredible insights into the making of the movie.
Book Now 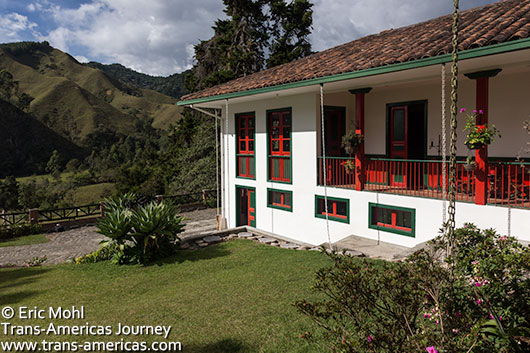 Our favorite new hotel in Colombia.

Best new hotel in Colombia: Reserva El Cairo Hotel brings the right mix of modern sustainability and Colombian traditional architecture (the restored and converted house is more than 100 years old) to the Salento area of central Colombia. Nestled in the Cocora Valley, a few miles away from the fray in the picturesque town of Salento, the hotel is surrounded by the storybook beauty of this valley which is home to stands of wax palms which are Colombia’s national tree and the tallest palm on the planet.
Book Now 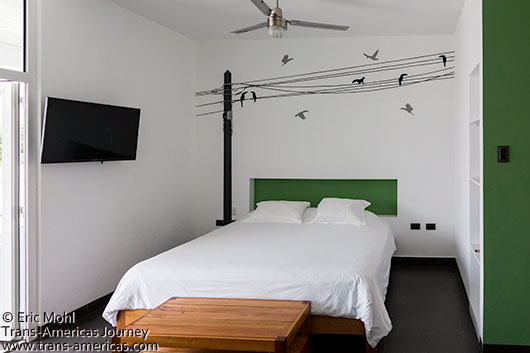 We love this painted headboard.

Best headboard: The awesome graphics of tucans perched on urban power lines behind the luxe beds at Tucan Suites in Tarapoto, Peru are arresting, playful and the perfect embodiment of this super-chic retreat in the gateway to Peru’s northern Amazon which is a haven for tucans and tourists alike.
Book Now 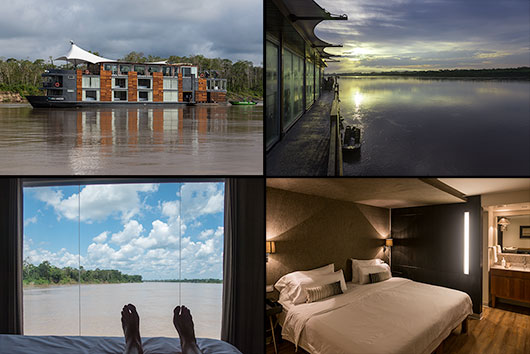 The Aria Amazon River boat in Peru is a floating boutique hotel.

Best floating luxury hotel: There are many ways to float down the Amazon river but nothing reaches the level of luxury, cuisine, and service offered by Aqua Expeditions which operates the Aria Amazon River Boat. We spent four days on the Aria which is, essentially, a floating world-class boutique hotel. Suites are elegantly designed. Staff members are polished and English-speaking. The food is fantastic with a cuisine program lead by Executive Chef Pedro Miguel Schiaffino who runs the award-winning Malabar restaurant in Lima. The on-board experience is so good that you almost don’t want to leave the mother ship for guided excursions into the Amazon. Almost. 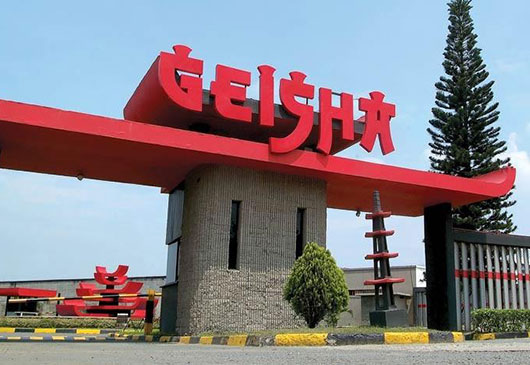 The Geisha love motel in Colombia.

Best love motel: A love motel is a discreet place, often on the edge of big cities, where lovers (covert or not) can shack up by the hour. They’re ubiquitous, popular and largely without stigma in Latin America were it’s common for couples to live at home where privacy is at a premium.  You can pull into a love motel, park your vehicle in a garage so no one can see your plates, enter your room and register all without ever being face to face with another human. Room service is delivered via a revolving lazy Susan in the wall to retain anonymity. Guests are often supplied with condoms and the better love motels have porn on the TV, Jacuzzis, condoms and even sex toys. The best love motel of 2015, by far, were the Geisha Love Motels in Cali, Colombia with their random, Japanese theme, sex chairs in the rooms which “accommodate 3” plus available “medical assistance” all for 60,000 cop (about US$20) for eight hours. For your convenience, there are two locations in Cali, one north of the city and one south of the city. 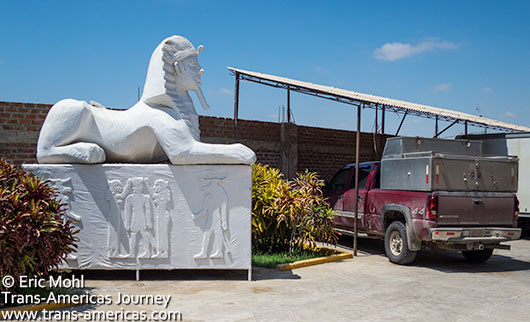 Why is there a sphynx in the parking lot of this budget hotel in Peru? We don’t know.

Best budget hotel with a random Egypt obsession: Rates at Hostal El Aribalo in Catacoas, Peru are a big draw – at just 70 soles (about US$20) for a private room with Wi-Fi, fan,TV, hot water bathroom, and an enormous parking lot it’s a bargain. The other draw is the unique decor. Never mind that the street out front is noisy and there was no mirror in our bathroom (only a huge one in front of the bed…) and the shower didn’t work properly and they’re using a bed skirt as a top sheet…We had King Tut in front of our door and a 14 foot (5 meter) tall sphinx looking over our truck in the parking lot. Why, pray tell, are the grounds, halls and rooms at this Peruvian hostal full of Egypt motifs? We have no idea. Frankly, we were a bit scared to ask. 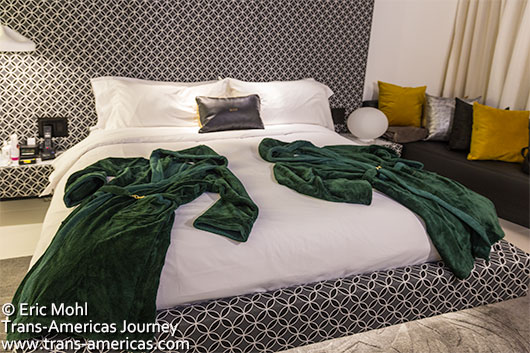 Designer bathrobes in the Extreme Wow Suite at the W Bogotá hotel.

Best cold weather bathrobe: Guests in the massive Extreme Wow Suite at the W Bogotá Hotel in Colombia’s capital are treated to robes designed by Bogotá –born fashion designer Estaban Cortazar who was head designer at Ungaro before famously storming out after Lindsey Lohan was brought on board as a consultant (who wouldn’t?). The lush hooded robes are emerald green with gold accents and come with a slim hook-and-clasp belt as well as the usual sash belt for those of us not quite as svelte as the designer is. There’s more in our full review of the W Bogotá Hotel for Luxury Latin America.
Book Now

Best hot weather bathrobe: The light, high quality cotton robes on board the Aria Amazon River Boat in Peru come in a chic shade of river stone grey, fit like a dream and aren’t too hot to wear in the Amazon.


Here’s more about travel in Colombia