Welcome to part 2 in our three part Best Of 2010 series of posts. Part 2 is all about the Best Food & Beverages of the year including tacos in Meixco and fried chicken in Guatemala. Part 1 covered the Top Travel Adventures of 2010 and part 3 covered the Best Hotels of the year.

Yes, yes, end of year round-ups can be lame. Or they can be a valuable chance for us to look back on the year that was and remember just how damn lucky we are. Done right, an end of year round-up can also be a valuable chance for you to get a quick hit of the best of the best tools, tricks, triumphs and truths that made our  Trans-Americas Journey in 2010 and, we hope, inspire you to hit the road yourself in 2011 (or 2012, no pressure). But frst, a few relevant stats.

We’ve also eaten nearly all our meals in restaurants of one description or another from street food stalls to bustling markets to multi-star restaurants. In no particular order, here are the… 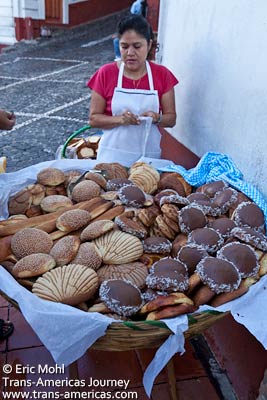 The bakers in Taxco, Mexico know what they’re going.

Best baked goods: Every afternoon around 5 pm a red VW Beetle (circa 1970-something) rolls into the Plaza Borda in central Taxco, Mexico with an enormous basket heaped with a dozen varieties of freshly made pastries, breads, cookies, and confections. The crew of female vendors can barely set the basket on its stand before they’re swarmed by locals eagerly pointing to their favorite goodies (all less than US$1). Luckily, the red VW returns with more lovingly-packed baskets strapped to its specially-designed roof rack until every morsel is sold. It does not take long.

Best agua fresca: The fresh  lime and strawberry infused water made by the friendly natural food vendor just inside the Mercado Libertad in central Guadalajara were all-natural, refreshing, and cheap. 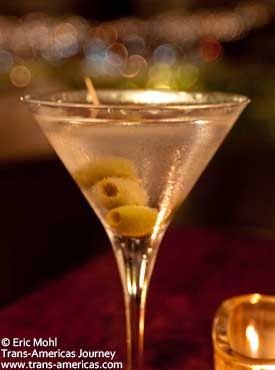 Best martini: The AAA four diamond Casa de Piedra restaurant at Hacienda Xcanatun near Merida in southern Mexico is renowned as some of the best eating in this already food-centric region (George W. Bush and Mexican President Felipe Calderón dined here together in 2007). Co-owner Cristina Baker, who is at the forefront of the local slow food movement and a passionate food innovator,  went to culinary school before opening the restaurant. The food, which combines French technique with local ingredients, was outstanding but it was the pre-dinner martini that was the star of the show–perfectly mixed, garnished with real cocktail olives, and served in the most elegant (yet functional) decanter we’ve ever seen.

Best chef’s table meal: Casa Oaxaca is a world-class boutique hotel that is only out-classed by its food. Headed by lauded local chef Alejandro Ruiz, who’s at the forefront of nouveu Oaxacan cooking, the cuisine at the hotel restaurant, the neighboring stand-alone restaurant and a charming more casual cafe just outside of the heart of Oaxaca City is reliably inventive and delicious. Still, we were not prepared for the mind (and palette) expanding meal we were in store for when we sat down for dinner at the hotel one evening. Chef Ruiz protege Chef Luis runs the hotel’s small-capacity kitchen and the four course meal he delivered to us was stunning in its daring (semi-solid green mole, hot chocolate with mezcal, etc) and it’s delivery (delicate fish on a polished rock instead of a plate). For 260 pesos per person (about US$22) it was also a stunning bargain. Reservations are a must if you want to eat at the small restaurant in the hotel. 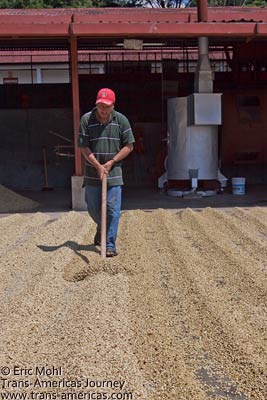 Best cup of coffee: Bruno Geisemann, owner of Finca Argovia in the Ruta de Cafe in Chiapas, Mexico, has a vision and it involves worms. And compost. And babbling brooks. And birds. And trees all over his shade-grown coffee plantation. He’s worked hard for years to realize his vision–turning his family’s coffee plantation into a model of sustainable organic farming. The earth here is happy and you can taste that in Bruno’s coffee which is so complex, rich and smooth that we finally learned to drink it black. A collection of beautiful cabins on the lush property are the perfect place to wake up to a cup of Bruno’s black gold before touring the operation. Warning: Bruno’s enthusiasm is as addictive as his coffee.

Best tamale: In San Cristobal de las Casas in Chiapas State, Mexico a red light bulb in front of a house is the universal sign that the tamales are ready. We skipped the offerings in the heart of town and walked a few blocks down Leon Street (keep to the right when the road splits) and headed for a tiny red light in the distance. Here, every Wednesday and Saturday after 7 pm, a woman sets up a steaming pot of fresh tamales filled with a mind-boggling variety of meats, chilies, cheeses and vegetables each variety shaped and tied differently so she can tell them apart as she fills your order. 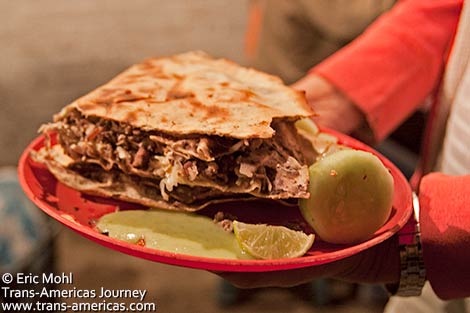 Best tlayuda: Beautiful Oaxaca is such a foodie town that the choices can be overwhelming but the one emblematic local food is the tlayuda (we didn’t find this concoction anywhere else in Mexico). Our favorite tlayuda is found about 10 minutes outside of the city center on a residential street called Avenida Mexico in the Colonia Infonavit 1 de Mayo neighborhood. Every night around 8 pm, a mother and her sons set up shop under a tarp. Look for the crowds and join them for a 12” homemade super-thin corn tortilla topped with a smear of beans, a handful of chopped cabbage, your choice of succulent fresh chopped meat and strips of mild Oaxacan cheese (like gourmet string cheese). Once on the grill, the tortilla is folded in half and the ingredients meld into a kind of Mexican Philly cheese steak. Topped with homemade salsas, this has the fun-factor of a snack with the staying power of a meal–and for less than US$3.

Best breakfast buffet: The buffet breakfast has almost become a joke, except that there’s nothing funny about stale cereal, weak coffee, and watered-down juice. Our faith in the institution of the grand breakfast spread was restored at Live Aqua Resort in Cancun, Mexico where Siete restaurant lays on a buffet that includes succulent meaty Mexican favorites like cochinita pibil in addition to all the more traditional breakfast treats (eggs, baked goods, wonderful fruit) plus endless champagne, a pot of fabulous coffee right on your table and some of the best house-cured salmon we’ve ever had. 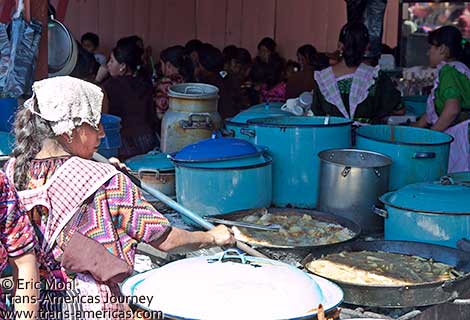 Best fried chicken: The smell got us first. Pure hot salty deliciousness wafting out of a collection of unassuming open-sided restaurants located smack dab between the two churches on the main square in Chichicastenango, Guatemala. In a country that’s crazy for fried chicken, Chichi (as the town is called) is, if you ask us, at the top of the pecking order. Fried on the spot the chicken is served with rice, black beans, french fries (another Guatemalan staple), and hearty hand made tortillas. Eat your heart out, Colonel. 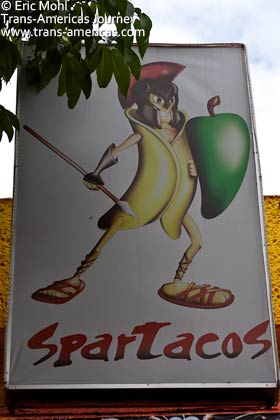 Tacos with ‘tude in Mexico.

Best fish tacos: Sixteen pesos (about US$1.50) is a whole lot to pay for a taco in Mexico (where they’re usually more like 3-5 pesos), but Taco Fish, on a wide swath of sidewalk on La Paz Street in central Guadalajara, Mexico, slings expertly fried fish and shrimp tacos with all the fixin’s (fresh salsas, spicy creamy sauces, fresh cole slaw). The crowd speaks for itself, but be warned: unless you’re an NFL linebacker do NOT order more than two. 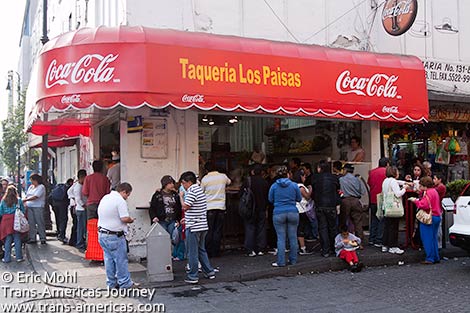 Best non-fish tacos: Tacos may be everywhere in Mexico but they are most certainly not created equal. At Taqueria Los Paisas in Mexico City a theatrical grill master and his team churn out thousands of beef, chorizo or al pastor (a cone-shaped stack of meat slowly grilled on a vertical rotating spit like a gyro) each day to perpetual crowds who help themselves to a fixins’ bar that includes grilled cactus, spicy chunky potato salad and plump beans as well as the usual salsas. Check out the delicious also-rans in our Mexico City Taco Taste Test.