Welcome to part 3 in our three part Best Of 2010 series of posts. Part 3 is all about the Best Hotels of the year including an eco retreat in Belize and luxury in Mexico City. Part 1 covers the Top Travel Adventures of 2010 and part 2 covers the Best Food & Beverages.

Yes, yes, end of year round-ups can be lame. Or they can be a valuable chance for us to look back on the year that was and remember just how damn lucky we are. Done right, an end of year round-up can also be a valuable chance for you to get a quick hit of the best of the best tools, tricks, triumphs and truths that made our  Trans-Americas Journey in 2010 and, we hope, inspire you to hit the road yourself in 2011 (or 2012, no pressure). But first, a few relevant stats.

We also spent nearly all 365 nights of 2010 in hotels (when we weren’t lucky enough to be staying with new friends, old friends, or family). In no particular order, here are…

Best Robinson Crusoe romance room: Posada del Arquitecto in a multi-level thatch-roofed open-air bungalow perched on a cactus-covered rocky outcrop a couple dozen feet above the Pacific Ocean which crashes dramatically onto the soft sand of Playa Rinconocito in Mazunte, Oaxaca State, Mexico. We snagged Cactus, the mojo-filled cabana the Italian architect owner originally built for himself. This duplex with its own entrance is rustic romance personified with a peep-free location that encourages traipsing around half-naked, a hammock made for two, a petite kitchen (just big enough to chill some beer, whip up some guacamole or a pasta dinner and brew morning coffee) and the sound and sight of those dramatic waves 24/7. There is nothing fancy here. The romance of this room comes from its location and its sense of seclusion–two key qualities that are hard to find.

Best all-inclusive: Generally speaking, we are not all-inclusive beach resort kinds of people. We are, however, world-class food, gorgeous decor, impeccable service, and classy guilt-free indulgences kinds of people which explains why we were so won over by Grand Velas All Suites Spa & Resort Riviera Maya. Sometimes we play our video, above, which was taken from our suite, just to reminisce…

Best check in: Arriving guests at Live Aqua Cancun are greeted by a staffer who sits them down in a comfy chair and proceeds to give them a hand massage. True story.

Best eco bungalows among Mayan ruins: The private flight in and the gourmet food say luxury, while the deep-jungle setting and the unexcavated Mayan ruins say cultural wonders. Both co-exist happily at Chan Chich Lodge in northern Belize, one of the world’s first luxury eco retreats and still one of the most impressive practitioners of the art of combining a sense of really being in nature (the warbling of ocellated turkeys will likely be your wake up call) with cocktail hour.

Best unexpected hotel art collection(s): There’s an arty little secret lurking in Chiapas, Mexico and it’s all thanks to one man. Mario Uvence is an art and antiques dealer and a figure in the Mexican and international art worlds. He is also the owner of  Parador San Juan de Dios hotel in San Cristobal de las Casas and Parador Santa Maria hotel near Lagos de Montebello. Both hotels offer antique-stuffed rooms in meticulously restored buildings. But the real reason to visit is to gain access to the petite but powerful art collections at each property, both run by the Mario Uvence Cultural Foundation. The  gallery at San Juan de Dios is appropriately called Eklektic and it features 17th to 21st century religious sculptures, paintings and other works of art from Chiapas, the Philipines and Europe. We saw pieces here (like a tiny baby Jesus carved out of ivory) that we’ve never seen in any other museum in the world. At Santa Maria’s Museo de Arte Sacro, religious pieces are on show in thoroughly modern displays inside the old bones of a renovated church. The collections, and their surroundings, are equally spectacular. 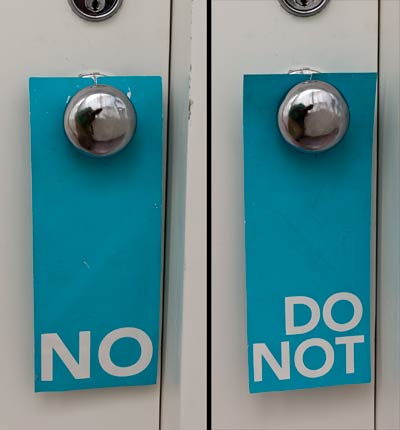 The winning do not disturb signs at Condesa df boutique hotel in Mexico City.

Best do-no-disturb sign: Privacy is paramount to many of the bold-name guests who check into Condesa df in Mexico City and that’s reflected in their door hang tags which read “No” on one side and “Do Not” on the other.

Best clever hotel web site: We look at a lot of hotel web sites and we can honestly say we’ve never been as entertained by a hotel web site as much as we were when we stumbled upon the Luz en Yucatan web site. The Luz, a moderately-priced guesthouse in the city of Merida, Mexico, offers “amusing accommodations” (a range of spotless, great-value stylish rooms and apartments) in a big converted home in the center of town. One of the rooms at Luz en Yucatan is named after a dearly departed iguana. The rate you pay (US$50 –US$94) is based on whether you consider yourself  “not at all successful” “moderately successful” or “exceedingly successful.” Rooms are available by the night, week, or month, or, for the existentialist “they are available by the moment.” Whimsical illustrations and a found-object/DIY look add to the charm of the site. Even if you’re not planning a trip to Merida a trip to the Luz en Yucatan web site is time well spent. 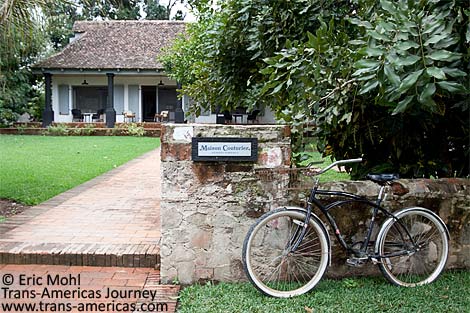 Best hotel surprise: It sounds crazy: A French farmhouse-inspired boutique hotel in a tiny Mexican town in Veracruz State. And yet, there it is. A pleasantly weathered bicycle leans against a stone wall. A limes sit in a colander on a wooden table under a gnarled tree. Jaunty Jack Russell terriers greet you at the door. Your room is sparingly furnished with meticulously-sourced European antiques and Mexican-made replicas of French classics. Meals are made using French techniques and local ingredients. Even the General Manager is French! Once we simply accepted (and reveled in) the unforced French style and charm of  Maison Couturier this place delivered the most transporting hotel experience we had all year.

Best new hotel (that we stayed at): From bordello to locksmith to one of Mexico’s best new boutique hotels. That’s the journey Hotel Brick has made. We were there soon after its opening and the place had already become a hip magnet in the very hip Roma neighborhood of Mexico City with cooler-than-you crowds of locals at the inviting lobby bar and lounge, La Modern French Brasserie and the downstairs “speakeasy” bar/club. But the neighborhood patrons (eventually) go home which means they miss out on the rooms at Hotel Brick. Despite the long, rich history of the building and the remains of many architectural details the rooms have a modern loft/pied-a-terre look and feel–somehow hip and homey at the same time. Like the neighborhood, Hotel Brick proudly displayed its own unique style and personality right off the bat–an unusual feat for a new hotel.

Best hotel room bathroom: Luscious beauty products, fluffy towels, and extravagant shower heads are standard bathroom issue at luxury hotels. But nothing about Las Alcobas in Mexico City is standard issue and that goes double in the bathroom where we were delighted (and a bit alarmed) to find a Toto toilet which had a heated seat, well-aimed cleaning jets, and even a blow dryer for your bum. The shower,which has three different shower heads, is constructed so that the drain is hidden along one edge, eliminating the need to stand on the drain while showering. The jetted tub automatically flushes and cleans its own jets after each use. Guests are offered a choice of full-size, hand-made, all-natural soaps upon arrival. Did we mention that the bathroom lighting is perfect too? 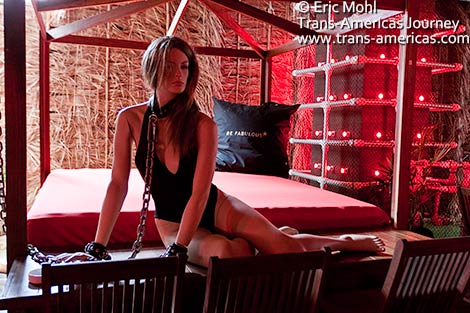 A mannequin at the Reina Roja hotel in Playa del Carmen.

Best S&M hotel: While walking around Playa del Carmen, Mexico something caught our eye. Just off the 5th Avenue pedestrian promenade we spotted a huge building that looked like condos or apartments. On closer inspection it turned out to be a hotel, but not just any hotel. There were mannequins posed on many of the balconies and thousands of red lightbulbs illuminated the interior and the exterior. This is Hotel Reina Roja (which means red queen in Spanish) which is owned and designed by an architect from Mexico City. He calls the Reina Roja a “Mexican emergent architecture theme hotel” and that about sums it up if your theme involves bondage. Red and black dominate. The hallways on all floors leading to the rooms are locked and have been turned into quasi-cages with wire fencing (to keep them out or to keep us in?). Half-clad mannequins are everywhere–in the restaurant, on balconies, in a cage in the lobby. The maids brush the mannequins’ wigs daily and the staff moves them around and poses them for best effect. It’s equal parts sexy and creepy.