Welcome to part 1 in our Best Of the Trans-Americas Journey 2013 series. Part 1 is all about the Top Travel Adventures we enjoyed during the past year of travels on our little road trip through the Americas including SCUBA diving in Panama with a man named Herbie Sunk (true story), truly adventurous jungle horseback riding in Costa Rica, and paragliding over one of Colombia’s largest canyons. Part 2 covers the Best Food & Beverages of 2013 and part 3 covers the Best Hotels of the year.

Now, in no particular order, here are the… 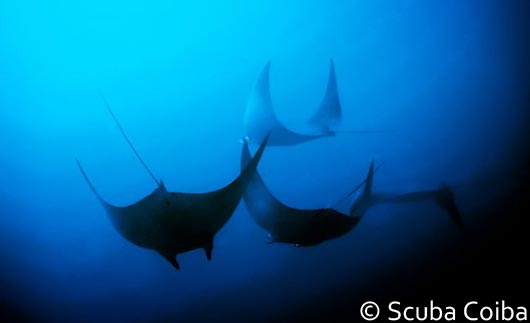 Best SCUBA diving: The water around Panama’s Coiba National Park (which used  to be a penal colony and is now a UNESCO World Heritage Site) is full of rocky formations and sea mounts which attract the big stuff like sharks and rays. We spent two days SCUBA diving in the area with Herbie Sunk (real name) who is the owner of Scuba Coiba based out of Santa Catalina. There was lots of current and not much visibility when we were there (March), but we still had a ball and even in the less-than-perfect conditions we could appreciate these unique dive sites. On the surface we saw dolphins, leaping mobula rays, bobbing turtles, and even a whale shark.

Best thrilling thing we tried for the very first time: Paragliding really is the best way to appreciate Colombia’s massive Chicamocha Canyon which is one of the largest in the world. When Parapente Chicamocha (parapente is the Spanish word for paragliding) offered to take us up, up and away we said yes. Quickly. Before “I hate heights” Karen could change her mind. We arrived at the launch site with owner Sergio and a team of wing wranglers and pilots then stood around and watched  the birds waiting for them to catch thermals so we could too. Then we ran of the top of the hill (well, Karen dragged her feet a bit) and the thermals took us up a few thousand feet above the canyon floor. We spent about half an hour rising, circling, dropping and rising again over the canyon. Eric says the view was great. Karen never had her eyes open long enough to really appreciate it and her forearms are still sore from the death grip she had on her harness. Our video, above, shows the gorgeous scenery and the thrill of flying during our paragliding adventure above Chicamocha Canyon in Colombia. Don’t miss the aerial acrobatics Eric goes through just before landing… 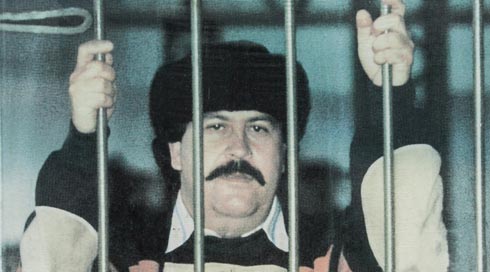 Best controversial tour: When we got an assignment to write a story about Pablo Escobar tourism in Colombia we booked one of the half-dozen or so Pablo Escobar Tours offered in Medellin, Colombia. We’re still struggling to find a healthy middle ground when it comes to this narco terrorist, but taking the controversial Pablo Escobar tour helped a little bit thanks to a guide willing to share personal stories and his own struggles with Escobar’s legacy.

Seeing a boa from horseback was a first for us.

Best horseback riding: If you’re gonna call it “Adventure Horseback Riding” and charge US$60 for 2.5 hours, you’d better deliver. Selva Bananito Eco Lodge & Preserve on the Caribbean coast of Costa Rica did just that with super sure footed horses, varied and challenging terrain, and even a boa constrictor sighting. This is not a ride for beginners, as we found out one heart-pounding, thrill-packed, fabulous afternoon. 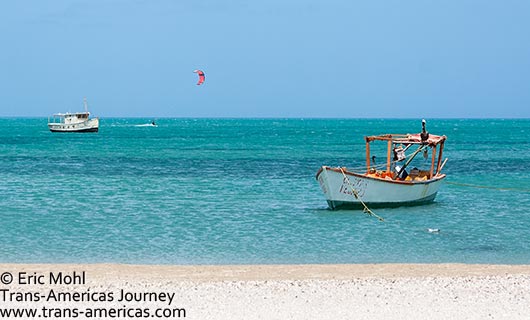 Best nearly deserted wind sport beach: Cabo de la Vela in the Guajira peninsula of northern Colombia is hard to reach and hot as hell but it’s also one of the best places in the region for wind sports as our traveling companion at the time, an avid kiteboarder who travels with not one but two kites, verified. As we sought the shade on shore George spent hours in the water (that’s him kiting, below) and raved about the consistently kiteable winds and the often deserted water.

Best white knuckle landing: Any time you get into a small plane you know that take off and landing are going to be extra exciting. Still, we weren’t quite prepared for the fly-straight-at-the-mountain-bank-hard-then-drop-straight-down-onto-the-“runway” landing that the pilot of our Air Panama flight artfully made into the dinky, waterside Playon Chico airstrip in Panama. The extra gray hairs were worth it, however, since this is the only way you can get to Yandup Island Lodge where we learned a lot about the area’s Kuna people, the largest indigenous group in Panama.

Fasten your seat belts, stow your tray tables, and check out this epic landing in our video, above. 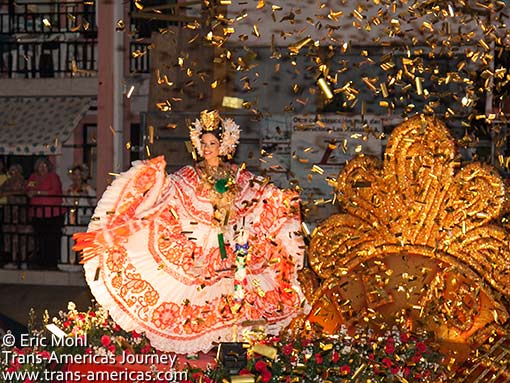 One of the two queens who duke it out (almost literally) during Carnival in Las Tablas, Panama.

Best festival: We attended/survived our first Carnival (aka Carnaval) in 2013 and while annual celebrations in Rio and New Orleans hog all the limelight we’re here to tell you that the festivities in Las Tablas, Panama hold their own with gorgeous, dueling, foul-mouthed Carnival Queens, relentless water cannons during the day and fireworks that approach the noise, mayhem, and danger levels of a combat zone at night. Go inside the madness of this five-day non-stop mega-party in our series of posts about Carnaval in Las Tablas, Panama. 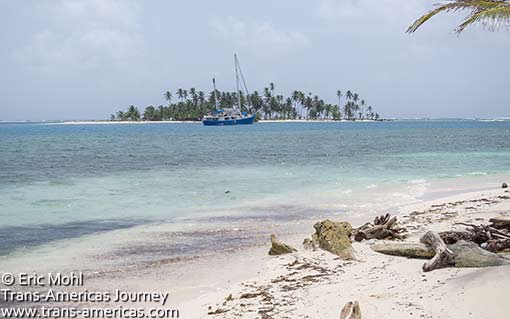 Part of the San Blas Islands in Panama which we sailed through on our way to Colombia.

Best difference of opinion: You can choose to explore the Panama Canal on a small tourist boat during a partial transit trip, which takes five hours and travels through three of the six locks, or during a full transit trip, which takes more than eight hours and gets you through all six locks traveling from the Atlantic Ocean to the Pacific Ocean (or vice versa). ONE of us had his heart set on the full transit from ocean to ocean. The other one of us spent the day wondering when the boat ride and subsequent bus ride back to Panama City would end. One man’s awesome day is another woman’s hostage crisis.

Our adventure/hostage crisis on the Pacific Queen booked through Adventure Life resulted in an awesome time lapse travel video, above, which will take you from ocean to ocean through the Panama Canal in just 10 minutes. 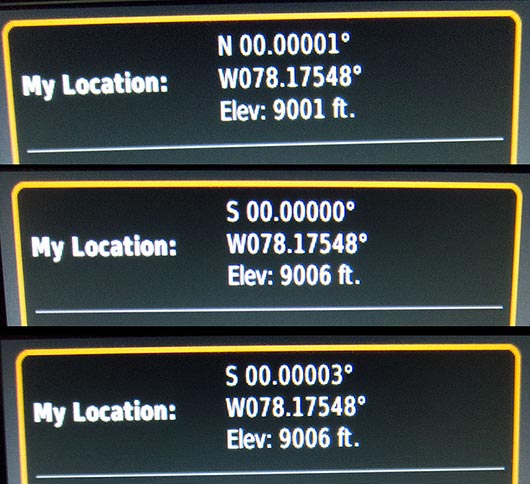 Best milestone: 2013 was also the year that finally entered the Southern Hemisphere when we crossed the equator in Ecuador as the photo of our Garmin GPS, below, proves.