The Corn Islands, about 40 miles (70 km) east of the Caribbean coast of Nicaragua, are not the easiest places to travel to but your effort will be rewarded. Everyone asks “which island is better?” Spoiler alert: we, like most travelers, prefer Little Corn Island which manages to be more pristine while still having a wider and more interesting array of places to stay, stuff to eat, and things to do than its bigger, more developed sibling. Even if you’re ultimate goal is Little Corn Island you’ll have to stop on Big Corn Island on your way there, so here’s our travel guide to Big Corn Island. 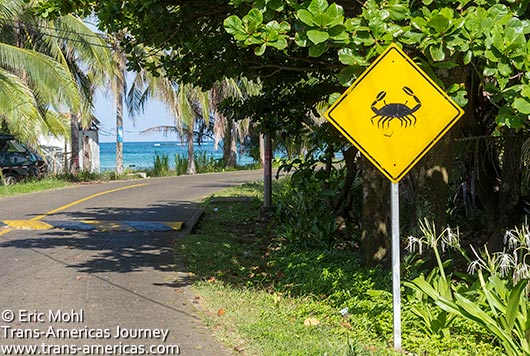 This is about as hectic as it gets on Big Corn Island in Nicaragua.

Getting to Big Corn Island

You can get from Managua to Big Corn Island by taking a bus from 9 pm to 3 am to the town of Rama then catching a water taxi at daybreak for a 1.5-hour ride to Bluefields. From there you get on another boat departing for Big Corn Island twice a week (subject to change without notice) for a five-hour ride that is often rough. The total cost for this multi-day, multi-craft journey is about US$35 per person.

Thankfully, there is another way.

For around US$230 round trip per person, La Costeña Airlines will get you to the quaint little airport on Big Corn Island in a puddle jumper from the international airport in Managua. Our flight made a pit stop at the airstrip in Bluefields where cargo and passengers were swapped before continuing on to Big Corn Island. Make reservations well in advance as this is the only airline servicing Big Corn Island and their tiny planes fill fast. 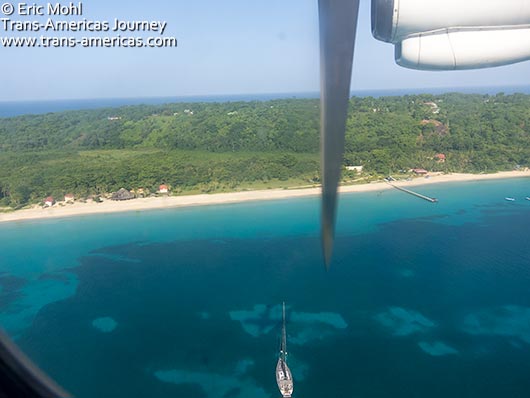 Our first view of the coastline of Big Corn Island in Nicaragua from our La Costeña flight from Managua.

When we landed we noticed a suspiciously swank looking helicopter under heavy guard at the airport. We later heard a rumor that it was President Daniel Ortega’s ride and that he was in the ‘hood because of a pretty big drug bust that was taking place in Bluefields and other towns and regions that have become part of a connect-the-dots that drug traffickers use to get the goods north.

If you’re tight on time we’d recommend that you go directly from the airport on Big Corn Island to the small dock area in the center of town where you can catch a boat for Little Corn Island. They leave twice a day, once in the morning and once in the afternoon. 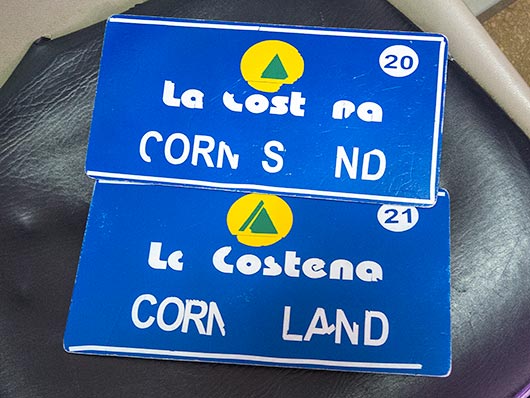 Our boarding passes for our La Costeña flight from Managua to Big Corn Island were these clipboard-sized pieces of plastic.

If you’ve got time to explore Big Corn Island, read on.

What to do on Big Corn Island

Despite its name, Big Corn Island has a total area of just four square miles (10 square km) which means it’s perfectly reasonable and enjoyable to walk around the entire perimeter of the island. If you’re too lazy for that you can flag down any of the numerous cabs on the island and get anywhere you want to go for about US$1 per person.

If the sight of all that Caribbean blue water makes you want to get in it, check out Dive Nautilus where Chema runs the only dive shop on the island. Our dive wasn’t earth-shattering, but it was enjoyable and we saw a few lobsters (Nicaragua’s third-largest export is lobster and much of it comes from commercial harvesting in this area), a southern stingray, some barracuda, and just a smattering of reef fish despite the fact that the coral coverage was pretty good. 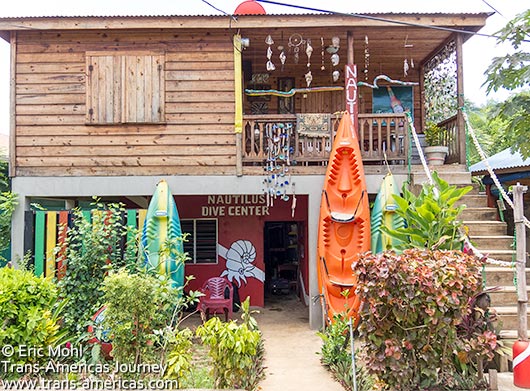 Where to eat on Big Corn Island

It’s easy to spend too much for mediocre food on Big Corn Island but a worthy splurge is a heaping plate of lobster and shrimp for US$12 at Comedor Maris (all the cabbies know where it is) served on a breezy patio.

Finding even mildly interesting cheap eats on Big Corn Island was a challenge. Ingredients and culinary creativity are both scarce. We finally found Cafetin McGowan (not far from the dock area where water taxis to Little Corn Island depart from) where a perma-smiling woman named Vesna plates up huge portions of fresh yellowtail for about US$4.

During our circumambulation of the island, we did not see a single waterside bar but you can enjoy a cold one right across the road from the water at Seva’s Dos Milas for less than US$1 or at Fisher’s Cove near the boat dock which is less tranquil but often breezier.

Where to sleep on Big Corn Island

On the south side of the island is Casa Canada with motel-style rooms each with a breezy porch overlooking an infinity-edge pool right above the Caribbean. It’s a peaceful setting and the view from the pool can’t be beat. The hammocks don’t suck either.

On the other side of the island, close to the airport, is Arenas Beach Hotel. Don’t be put off by the hotel’s “Miami circa 1975” website. This place has a nice bit of beach with a bar built into the hull of an old boat, loungers, and a bonfire area and they’ve done a lot with concrete and festive paint. 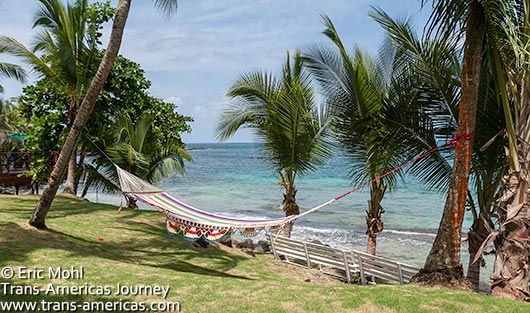 Eric got out of this hammock at Casa Canada on Big Corn Island just long enough to take a photo of it. 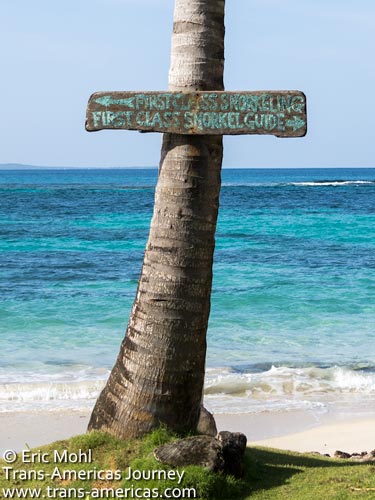