Street art is often a form of protest and social commentary. The political street art in Bogotá, Colombia plays out around recurring themes of social injustice, anti-capitalism, and war and peace. 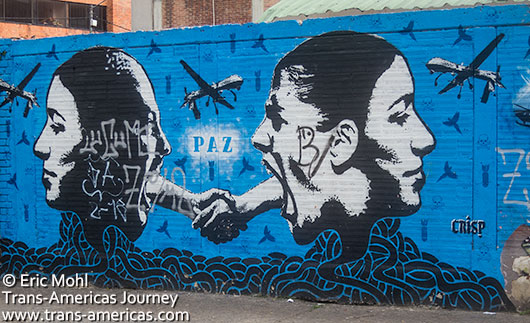 Peace is a recurring theme in the politically charged street art in Bogotá. This piece, called Paz (Peace) is by Crisp.

Political street art in Bogotá: War, peace, and the “disappeared”

Colombia is (slowly) emerging from more than 50 years of ongoing violence, armed conflict, and civil war, but the damage has been done. According to the New York Times more than 220,000 people have been killed and more than 40,000 have simply disappeared. The country is ranked #1 in the world in terms of  “internally displaced persons” because it’s estimated that nearly six million Colombian citizens have fled their homes and moved to other areas of the country to escape violence. According to the UNHCR, Sudan has half that many internally displaced persons.

It should surprise no one that street artists often articulate a rage about the high cost of war and the slow search for peace (the Colombian government and FARC rebels were in peace talks for years before signing an agreement in 2017) that is shared by many. 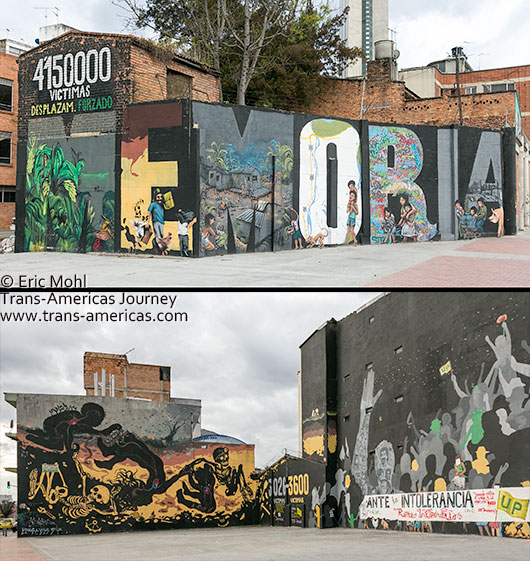 Memoria (Memory), a massive multi-wall work created primarily by ARK, Chirrete Golden, is a seething ode to those killed, disappeared, and displaced by a half-century of conflict in Colombia.

The Memoria work, above, is even more poignant because it’s located across the street from the Centro de Memoria, Paz y Reconciliation. Opened in 2012, the Center of Memory, Peace, and Reconciliation was designed to create a space where the violence and loss of the past could be recognized and honored in a way that allowed everyone to move forward to peace without forgetting the human cost of war. Thousands of test tubes of earth from massacre sites around Colombia were installed in an abandoned section of a cemetery which itself is a charged site to begin with because it’s where victims of the revolt of June 9, 1948, regarded as the beginning of decades of violence in Colombia, were taken. 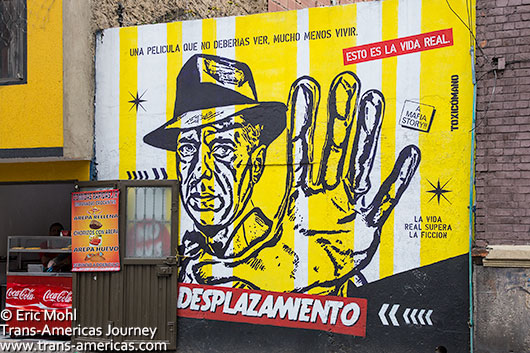 This piece by Toxicomano is called Desplazamento (Displacement) and is a reminder of the millions of Colombian citizens who have left their homes and migrated elsewhere in the country in order to escape violence. No other country has more “internally displaced” people than Colombia. 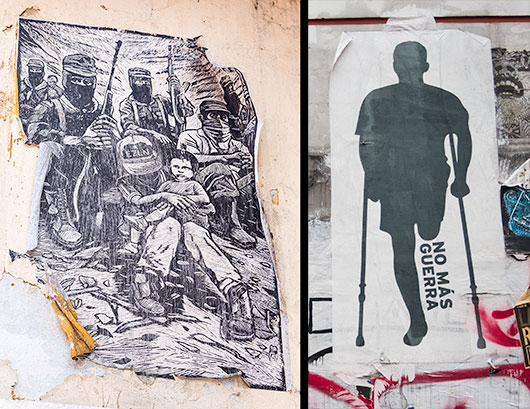 Even after the peace agreement between the Colombian government and FARC rebels, a separate group of rebels, called EZLN, still exists in Colombia, as depicted here (artists unknown to us). 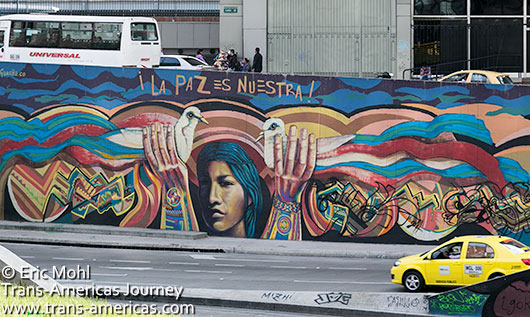 This massive piece by Guache sums it up as an indigenous Colombian woman holds doves under the slogan La Paz is Nuestra (Peace is Ours).

Social injustice and the divide between “haves” and “have nots” is profound in Colombia and that’s rich fodder for political street art in Bogotá’s from socially-minded artists. 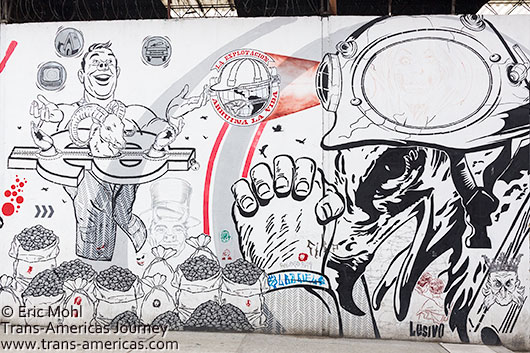 War, greed, and capitalism are common stomping grounds for Lesivo as in this piece which includes a tip of the hat to the US-backed Plan Colombia anti-war and anti-drug initiative that has led to the murder and disappearance of many Colombians.

The duo Saga & Crudo decry capitalism by showing the Monopoly Man being held up by their own creations. Don’t miss the pooch getting screwed on the right. 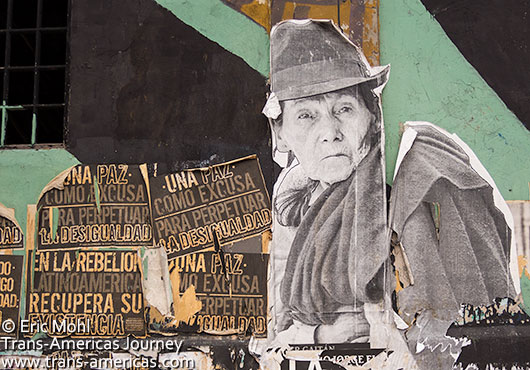 Peace and inequality depicted in street art in Bogotá (artists unknown to us). 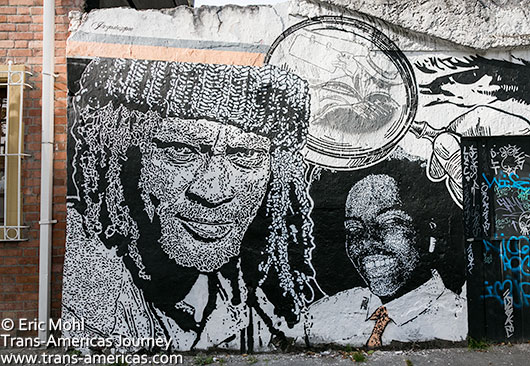 DJ Lu often includes “El Calidoso” (on the right), a homeless man who was burned alive in Colombia, in his work. 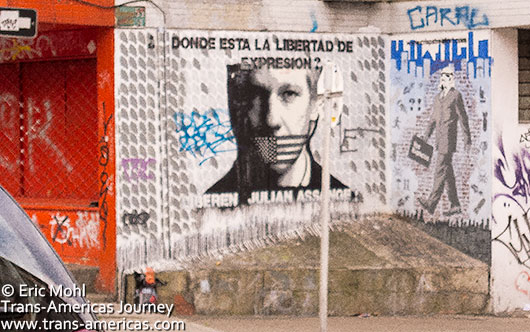 Global politics are often tackled as well, as in this piece by Crisp which depicts Julian Assange. It reads “Where is freedom of expression?”

Mining and oil extraction form a large part of Colombia’s GDP and there’s growing discontent about environmental threats and policies in the country. Many of those complaints and fears play out in the political street art in Bogotá. 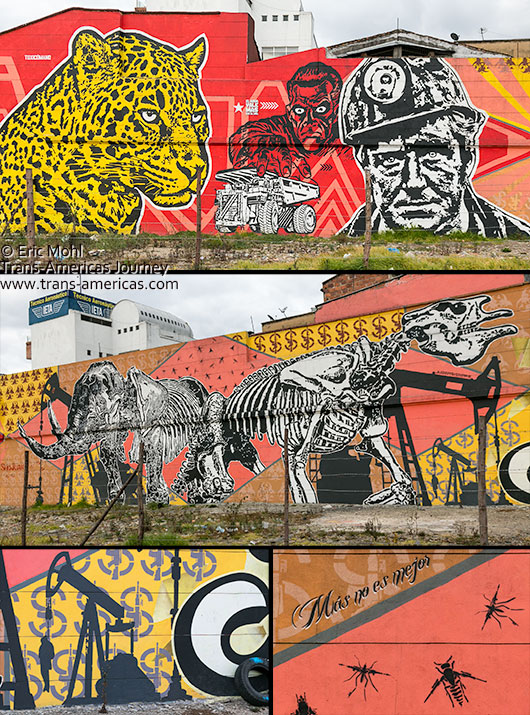 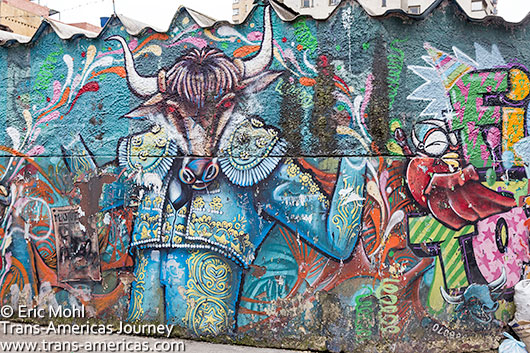 The previous mayor wanted to outlaw bullfighting and this piece, artist unknown to us, takes up the animal rights position by marrying the bull fighter and the bull. 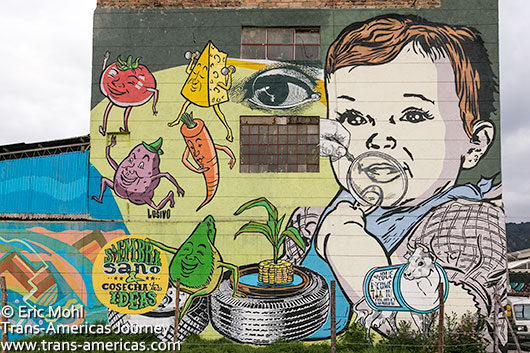 This piece by Lesivo gets at the importance of a clean environment and healthy food.