It’s not easy to get to the Bonampak & Yaxchilán archaeological sites in Chiapas, Mexico but the well preserved carved stele, murals, living Lacandon culture, and lush jungle make every bump, bus, and boat worth it. 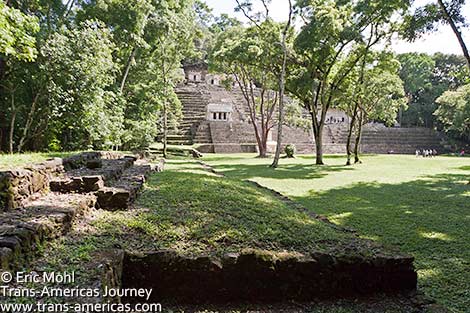 The main plaza at Bonampak archaeological site, home to some of the best-preserved stele and paintings in the Mayan world.

After two and a half hours on severely pot-holed pavement (which is even worse than pot-holed dirt) we were happy to park the truck at the ramshackle village-run welcome station near Bonampak archaeological site. Here you’re required to pay 71 pesos per person (about US$6) to the local Lacandon community.

That pre-entrance fee entitles you to a seat on an old school bus with all of the windows missing for the 20-minute drive to the site itself. Almost as soon as the bus pulled away from the ugly mess of unfinished concrete at the entrance station we entered another world. Green, lush, flourishing jungle surrounded us and was so dense and alive it seemed as if it might grow over the road behind us.

This, finally, felt like being in the mythic Lacandon Jungle. Leaves bigger than a Smart Car, deep silence, crazy shades of green, a real sense that you (and your fancy GPS and hi-tech bug-repelling clothing) really do not know how to survive here. It’s a combination of simplicity and severity that’s foreign and humbling. 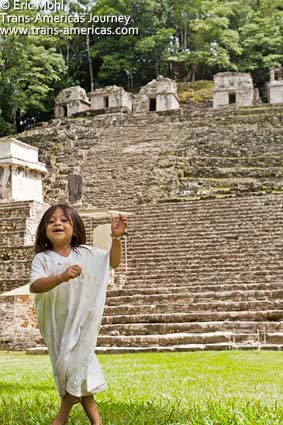 A Lacandon boy playing in the main temple of the Bonampak archaeological site.

Helping the jungle vibe along was the fact that our guide from the village was a young Lacandon named Chan Bar who like most of the few remaining Lacandon people (some estimates claim there are fewer than 800 alive today), he was wearing the traditional white unisex tunic and sporting the signature long black hair of the Lacandon. He was even carrying his bow and arrow. It all could have felt contrived, but Chan Bar was so naturally at home that it made sense and felt true. Chan Bar is so emblematic of the Lacandon that we later spotted him in an official tourism promotion video made by the government of Chiapas. 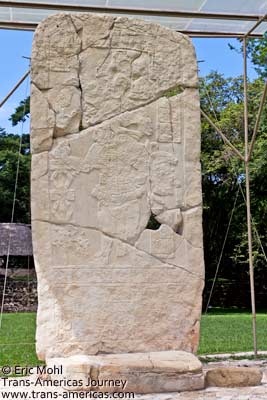 Stele 1 at Bonampak–at nearly 20 feet (6 meters) tall it’s one of the tallest stele in the Mayan world.

The Bonampak site, which required its own entrance fee of 41 pesos (about US$3.50), does not have massive temples or vast excavated areas. It’s really just one plaza. Within that plaza, however, lie some of the most intact stele in all of the known Mayan world. The stone used by the Mayans of Bonampak is harder than the stone used in other areas and that means they’ve weathered better over the years, despite the fact that they remain in position in the plaza without much protection from the elements. Stele 1, a particularly giant white stele which is nearly 20 feet (6 meters) high, is one of the tallest stele in the Mayan world. 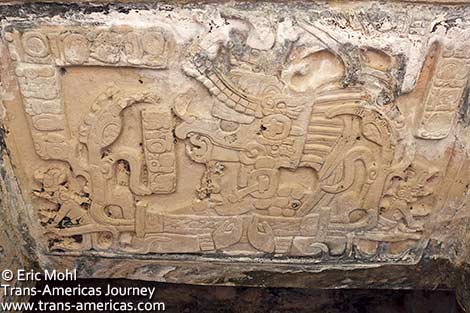 Well-preserved carving on a door lintel at Bonampak archaeological site.

The inscriptions on the stele are still so clear that even our completely untrained eyes could make out distinct images in the storytelling carved into each awesome stone panel. Okay, we had no idea what the story was about, but we could at least make out recognizable icons and characters. It was thrilling. The carving was in such good shape that we asked Chan Bar in confidential tones if the stele were really originals and not just great copies. He just smiled at us as if we’d asked the dumbest question of the day. 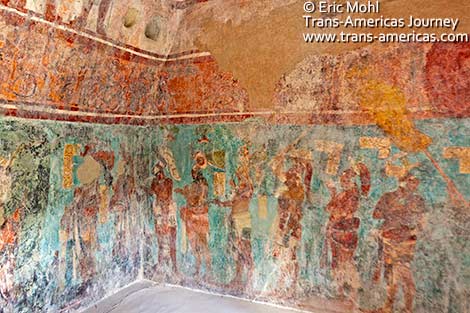 Still-vibrant wall paintings in the Temple of the Murals at Bonampak archaeological site.

Bonampak’s other draw is the Temple of the Murals, a strip of three small rooms with walls covered in some of the best-preserved murals. Time and tourism have faded some of the color and there are now guards outside each room and rope barriers inside each room to keep tourists (and their wandering hands) away from the murals. As if to reinforce the “do not touch” rule there was a 2″ scorpion on one of the walls. When we pointed it out to the guard he gave us a Mexican version of the “And…what’s your point?” stare.

Even without the scorpions, the murals are exciting stuff, depicting scenes of battle and prisoner torture and ritual tongue piercing and fancy rulers. You know, everyday Mayan stuff.

From Bonampak we braved the pot-holed pavement once again and headed toward the riverside town of Frontera Corozal, passing through Lacanja on the way. We pulled into this Lacandon village to check it out and went away with the feeling that Lacanja exists in a kind of no-man’s-land between Lacandon culture and a Mexican village.

There is no ambiguity about Frontera Corozal. It’s a dusty town in the dry season and a muddy town in the wet season and would be little else if it weren’t the jumping-off-point for Yaxchilán archaeological site.

In Frontera Corozal we checked into the Escudo Jaguar Hotel just in time for a surprisingly good dinner in the hotel’s restaurant. In the dining room, we met an American couple (Jed and Sam) and a French couple and we all agreed to visit Yaxchilán together in the morning so we could split the cost of the lancha (a small boat with an outboard motor) that must be hired to reach the site. The boat captains will tell you it’s a set price of 900 pesos (about US$78) for up to seven people but haggle hard. 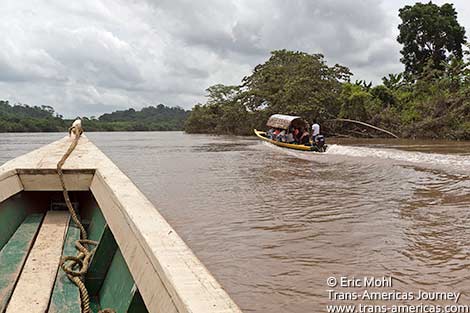 On our way to the Yaxchilán archaeological site which is reached only by boat.

Like Bonampak, the journey to Yaxchilán is a big part of the thrill. The lancha ride, which takes about an hour each way and cost us 600 pesos for six passengers (about US$9.00 each), goes up the Usumacinta River which doubles as the border between Mexico and Guatemala. We enjoyed the cool morning air and saw quite a few birds, though much of the riverside jungle on the Mexican side had been sacrificed for corn fields. The Guatemalan side of the river looked pretty much untouched since no roads really go out there and there are no real settlements.

Our video, below, lets you tag along as we journey up the Ucmancinta River in a lancha to reach the Yaxchilán archaeological site in Chiapas, Mexico.

An unusually hilly site, Yaxchilán requires quite a bit of climbing in order to see all of the areas. It’s slippery and sweaty but also worth it to see what remains of this powerful pre-Classic and Classic era Mayan city. Many of the lintels that the site is famous for have been moved to the excellent Museo Nacional de Antropologia in Mexico City for safe keeping, but there’s still plenty to see (stelae, cockscomb rooftops, lots of excavated plazas and structures) and plenty of atmosphere to soak up. Not to mention the howler monkeys and emerald toucanets (or were they aracaris?) that we saw. 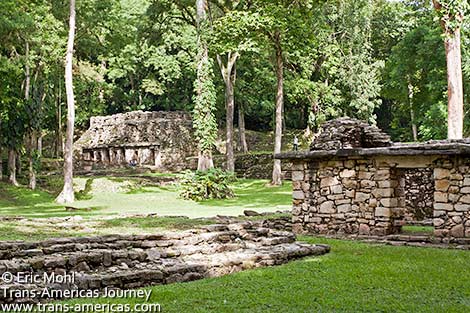 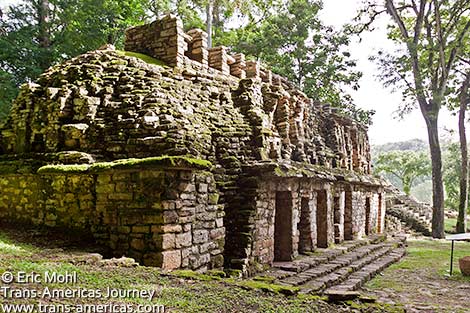 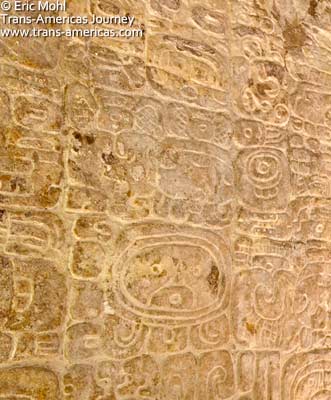 Yaxchilán archaeological site in Chiapas, Mexico is famous for its carved lintels. Many have been taken away to various museums, but this one remains at the site itself. 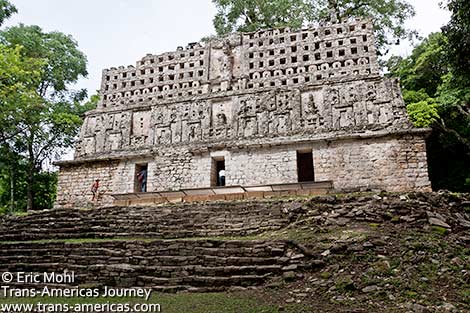 An ornate cockscomb roof structure on a temple at Yaxchilán archaeological site in Chiapas, Mexico.

Despite the mosquitoes, this was easily one of Karen’s favorites Mayan sites so far. Allow a couple of hours at Yaxchilán before returning to Frontera Corozal, back downriver. 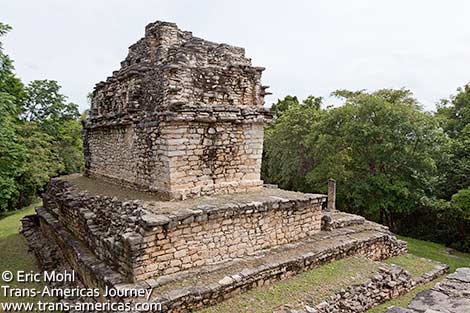 Yaxchilán archaeological site is unusually hilly and to reach beauties like this requires a jungle climb. 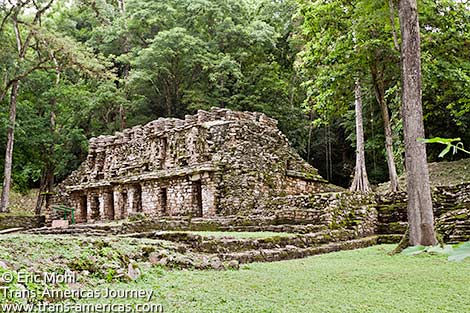 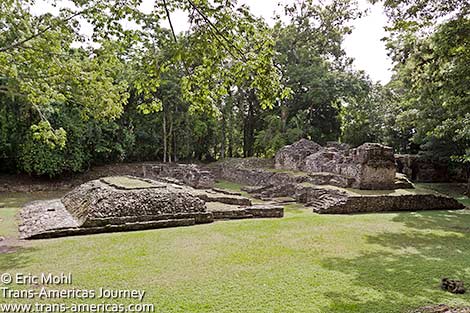