Bonito would be just another sleepy town in the southern Pantanal region of Brazil if it weren’t surrounded by rivers of crystal clear spring-fed water which are home to so many docile (and delicious) fish that it seems you might be able to walk on water after all. Here’s our travel guide to the watery wonderland in Bonito, Brazil including floating, swimming, snorkeling, and diving (plus a few dry adventures too). 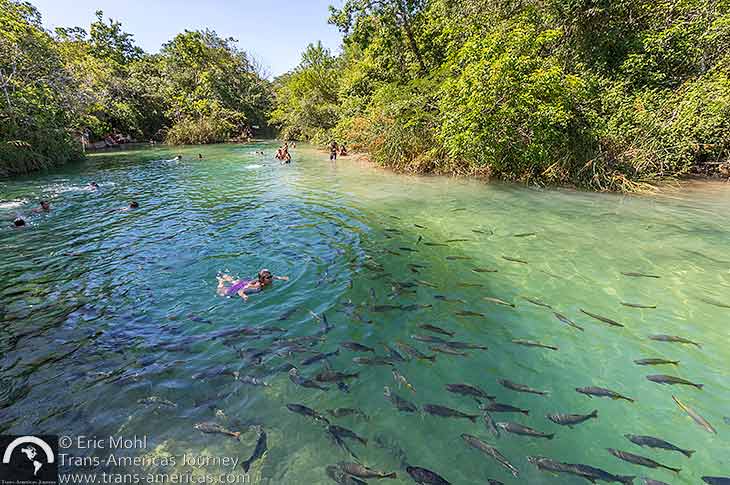 The Municipal Swimming Area is the closest and cheapest way to enjoy the crystal clear water that Bonito, Brazil is famous for.

Bonito started out as a rural collection of enormous farms (called fazendas in Portuguese). Slowly, landowners realized that the rivers and waterways on their land were not like other rivers. In Bonito, the water is supernaturally clear. So clear that it almost creates an optical illusion, as if you’re looking at a mirror or just thin air, not water.

When tourists started coming to see the natural beauty of the place some landowners stopped farming and created an infrastructure to make it easier for visitors to access rivers and waterfalls and Bonito’s tourism industry began. 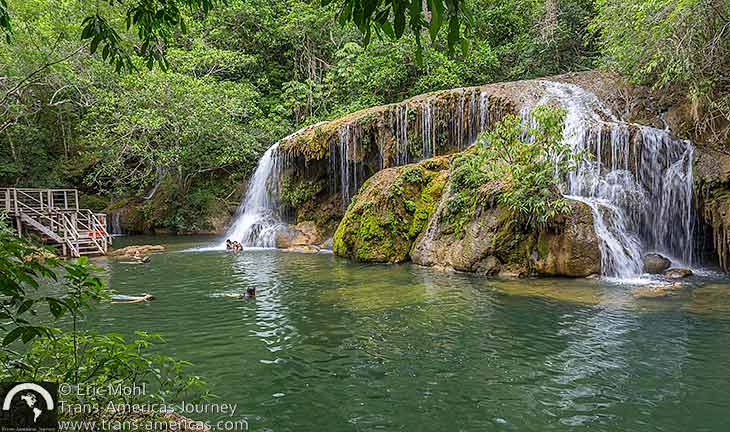 One of eight waterfalls on the hiking and swimming circuit at Estancia Mimosa.

Today, there are dozens of tour agencies selling dozens of tours and those in the business have even begun to self-regulate with visitor caps and other measures meant to limit the human impact on their amazing waterways. 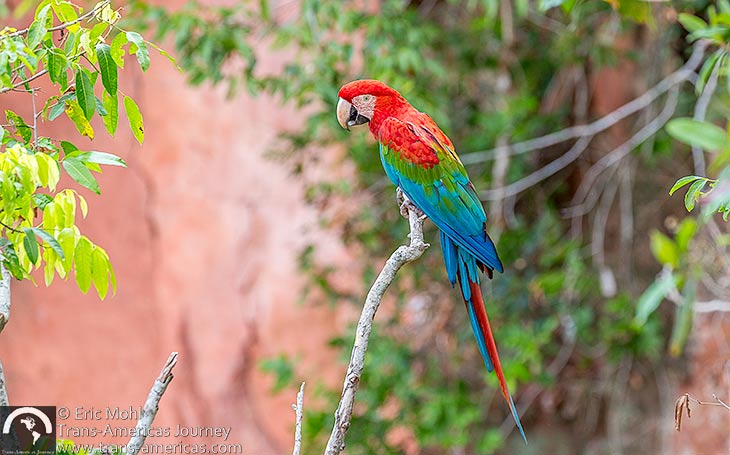 A red and green macaw hanging out in the enormous Buraco das Araras crater.

What to do in Bonito, Brazil

It’s (almost) all about getting wet in Bonito. Most sites are a 30-60 minute drive from town except for the Municipal Swimming area (Balenario Municipal) which is right on the outskirts of Bonito. That’s where we started (30 BRL entry, about US$9.50 per person, buy a voucher at any tour operator in town or at the entrance to the swimming area). This is the cheapest and easiest way to enjoy the amazing water in Bonito and no guide is required. 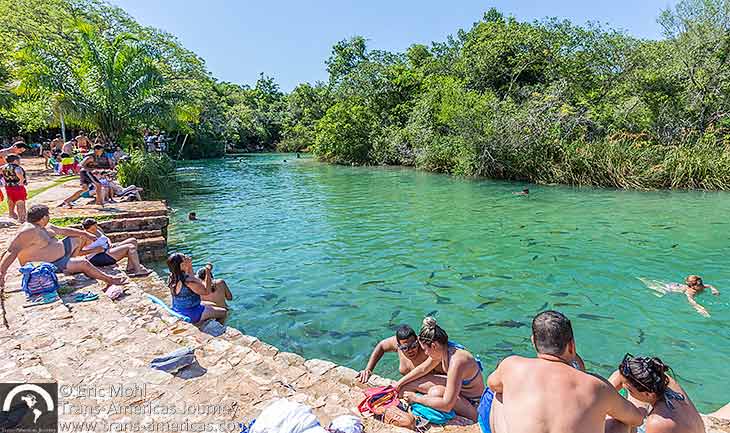 The Municipal Swimming Area in Bonito is very popular, especially on weekends.

The Municipal Swimming area accesses the spring-fed Formosa River which flows through a series of wide, deep swimming areas connected by sections of river which you can float down. The water was full of big fish too which were fun (and disconcerting) to swim with. 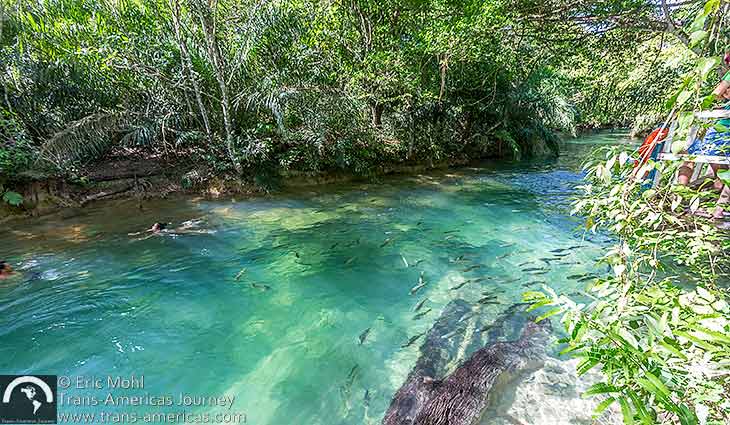 Yes, the water really is that clear in the Formosa River around which Bonito’s Municipal Swimming Area is built.

There are surprisingly good outdoor restaurants too. We got great chicken Milanese with potatoes, salad, and rice for 18 BRL (about US$5.75). Cold beer is available too for 5 BRL (about US$1.50). Other facilities include a large parking area, changing rooms, and bathrooms. It gets very busy with locals on weekends.

Rio da Prata is one of the most popular destinations in Bonito and for good reason: it’s the longest continuous snorkeling stretch in the region at more than 1 mile (2 km). The road from Bonito to Rio da Prata is mostly paved but allow about an hour to reach the main complex. From there you take a short drive in an open-air vehicle, then walk along a 1 mile (2 km) trail for about 30 minutes to reach the river which is full of fish including many golden dorado. 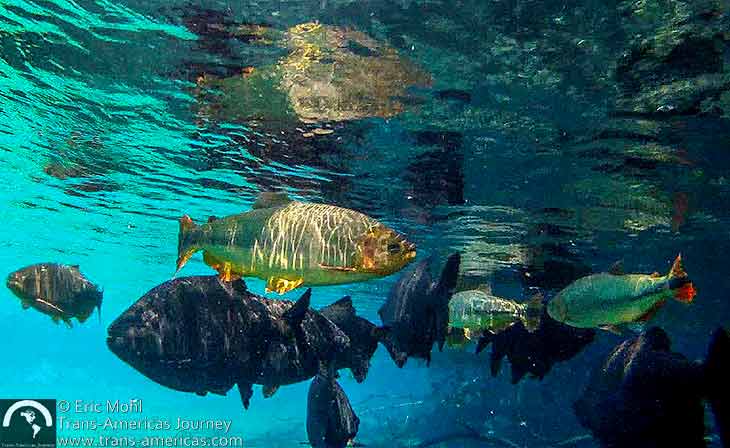 A flashy golden dorado, and other species of fish, in the Rio da Prata.

As we floated downstream in the swift current we also saw monkeys in branches over the river as we passed under them which was a unique perspective. Facilities at the main complex, where you start and finish, include (weak) WiFi, shaded seating, bathrooms, showers, lockers, and an area full of hammocks. 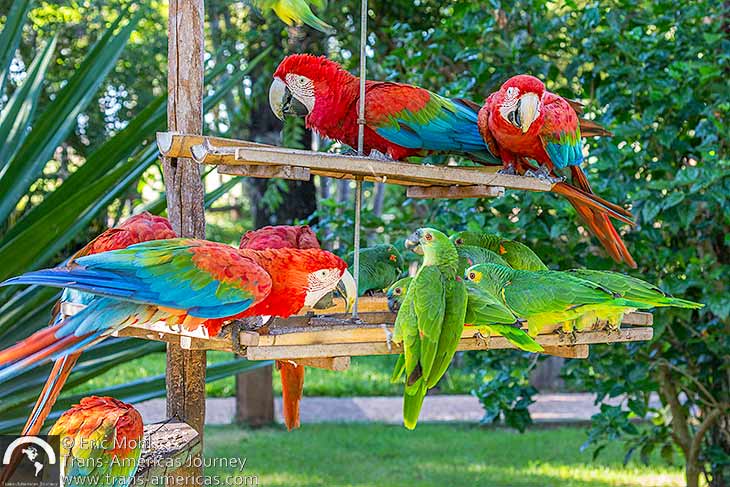 Visitors who arrive to Rio da Prata in the morning have the best chance of seeing the most species of birds, like these wild parrots and macaws who come to the feeder.

Many macaws, parrots, ibis, jays, and other birds congregate at the feeders and in the trees around the complex (especially in the morning). Some staff members speak some English and neoprene booties, short wet suits, and masks and snorkels are provided. Horseback riding is also available. Lunch is a huge buffet of traditional favorites, including some vegetarian options, cooked over a wood fire and served in a rustic kitchen. To help control environmental impact, there’s a self-imposed limit of 150 people per day at Rio da Prata. 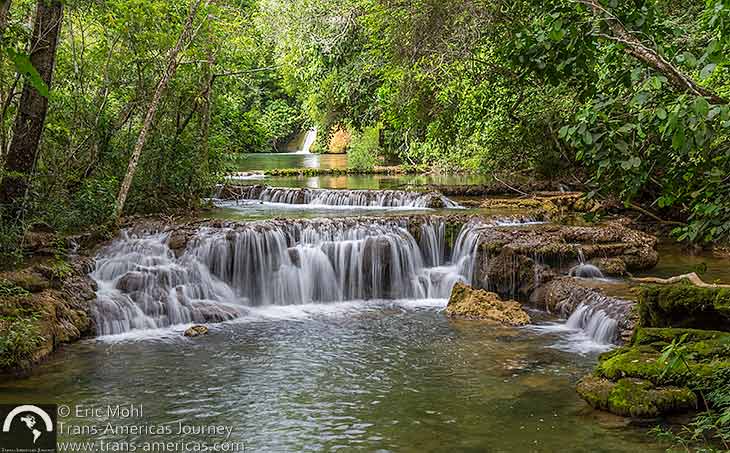 Waterfalls in the spring-fed Mimosa River are the main attraction at Estancia Mimosa.

Estancia Mimosa is about 30 minutes from  Bonito and the main attraction on this farm turned nature reserve is a section of river that is punctuated by a series of eight waterfalls. Opened to tourists in 1999, this place now has a trail (about 2 miles or 3.2 km) which connects eight waterfalls where wooden platforms and stairs make getting into the water easy. Or you can just jump. 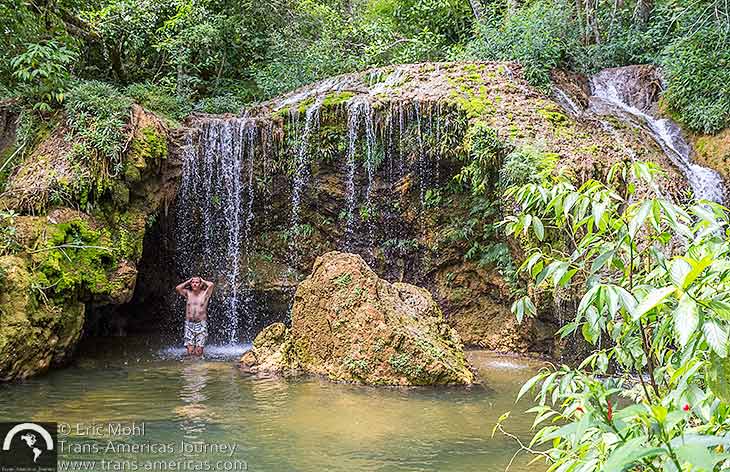 Eric swimming in a waterfall in the spring-fed river at Estancia Mimosa near Bonito.

One particularly deep natural pool has a platform 20 feet (6 meters) above it. Horseback riding and bird watching (claim 250 species have been seen on the property) are also offered. A life jacket and a guide are included along with a massive post adventure lunch buffet. Neoprene booties, which you can walk in and swim in, are available for rent. Or just wear a sturdy pair of flip-flops or Crocs. 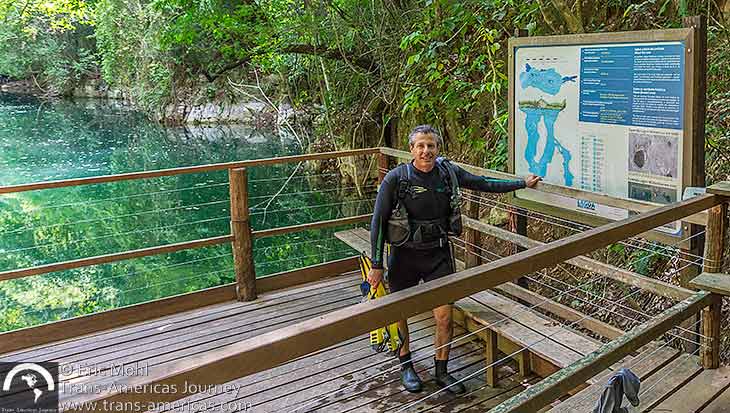 Eric after his dive in the Lagoa Misteriosa flooded sink hole.

Lagoa Misteriosa offers something entirely different: SCUBA diving in a flooded sinkhole that is 246 feet (75 meters) deep. The water is clearest between April and October. During the rest of the year plankton makes the water murky. Our dive master, Joao, told us that the water was never murky until local farmers began using pesticides. We were there when the water was murky, which meant Eric and Joao had to dive deeper in search of clearer water (Karen didn’t dive because she was still healing from emergency surgery in Campo Grande to remove her appendix). 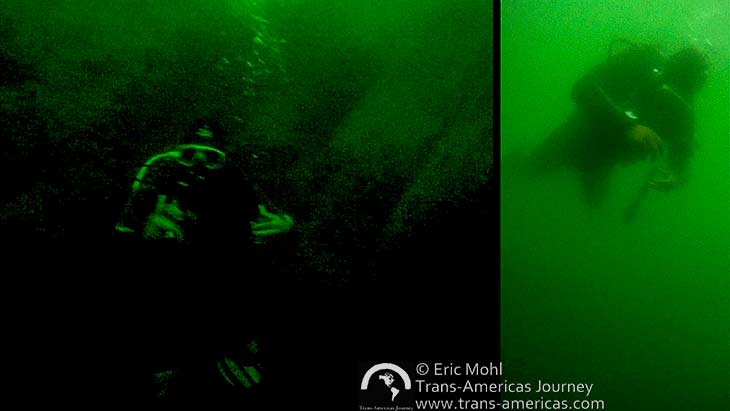 Eric diving in the flooded sink hole at Lagoa Misteriosa – as you can see, it’s worth planning to be there in the months when the water is clear.

When conditions are murky divers must have advanced level certification or higher. In clear water conditions basic open water certification is enough. To help control environmental impact only 28 divers per day are allowed in clear conditions. In murky conditions, just four divers a day are allowed. Honestly, visibility was really poor in the murky conditions so it’s worth planning to be there between April and October for the spectacularly clear water. SCUBA gear is provided.

Not every adventure in Bonito takes place in the water. For example, you will stay perfectly dry during a visit to Buraco das Araras (65 BRL or about US$20 per person including a mandatory guide, 7 am to 5 pm) where a loop trail around a sinkhole provides ample vantage points for viewing the resident red and green and red and blue macaws. 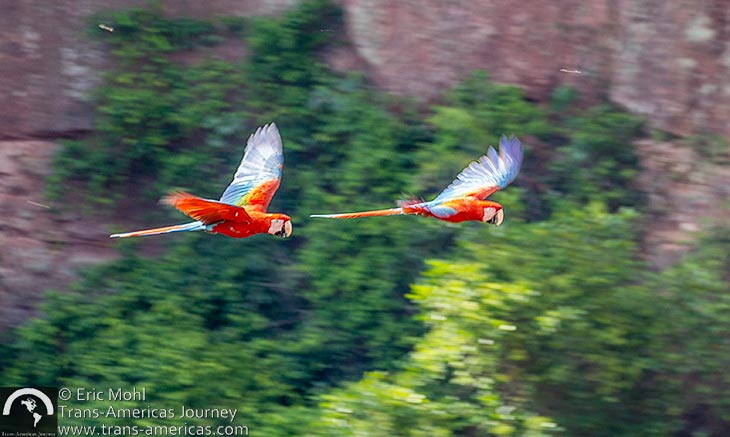 A pair of red and green macaws at Buraco das Araras near Bonito.

Allow about an hour to finish the guided walk and you must wear closed shoes (no flip flops or sandals). We saw lots of macaws and the birds come and go and make a racket all day long as they fly into and out of the sinkhole which 330 feet (100 meters) deep and about 1,650 feet (500 meters) around – large enough to have a small forest growing inside it. 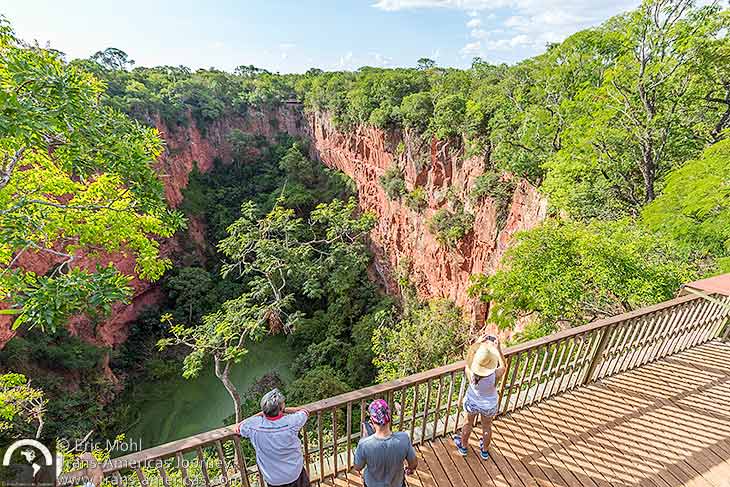 A viewing platform over the Buraco das Araras.

More hardcore adventure tourism is beginning to take off in Bontio as well. The rappel from a steel platform at Boca da Onca, for example, is said to be the highest in Brazil. There are zip lines on offer and cave adventures too.

Where to sleep in Bonito, Brazil

We stayed at Pousada Galeria Artes where owner Maria Pires has created a well-run oasis using her natural Brazilian hospitality and experiences gained when she lived in Europe (including great English skills). Located about 10 blocks from the center of Bonito, the hotel has a big and peaceful central garden that’s full of mango trees, a pool, a parking area, and a range of very comfortable rooms in two separate buildings. Breakfast is amazing as is Maria who (literally) saved Karen’s life when her appendix needed to be removed.
Book Now

Maria’s new place, Hotel Fazenda Beija Flor, just opened and offers seven rooms, plenty of hammocks, and a country house feeling that invokes old Bonito. This is the place to go if you’re a bird watcher (more than 100 species have been spotted) or orchid lover. There’s also a small beekeeping and honey producing operation on the property which is just outside of town. 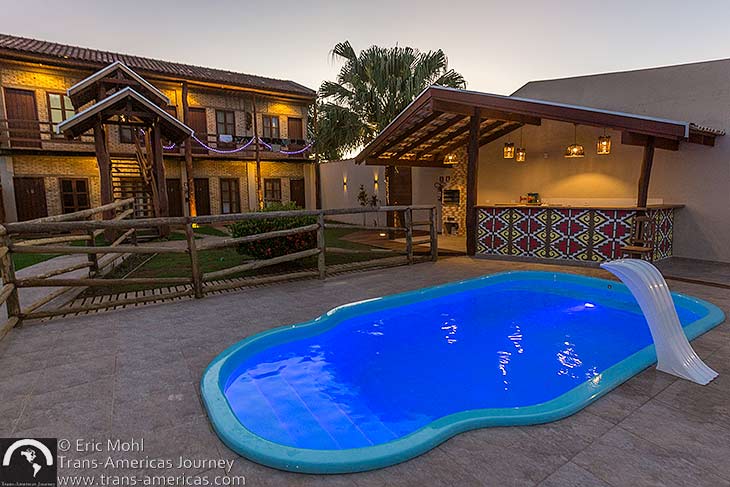 We also spent a few nights at Pousada Muito Bonito which is centrally located. Opened in 1994, it was one of the first hotels in Bonito. It’s been renovated and upgraded through the years but it’s still owned by the same family. There’s a parking area, a small pool (added in 2016), and small but comfortable rooms. In addition to the area’s natural beauty, the owners also want to promote the area’s culture, including the indigenous groups that once thrived in the area. For example, check out the tiles around the pool, above, which pay homage to the iconography in the art of the Kadiweu people.
Book Now

No matter which accommodation you pick, be aware that Bonito gets very busy during holidays and weekends, so make reservations during those times.


Where to eat in Bonito, Brazil

Bonito Beer Cervejas Especiais opened in late 2016 in a small, stylish space about a half block off the main plaza. They’ve got dozens of craft beers, mostly from Brazil. Communal wooden tables encourage conversation and there are also tables on the sidewalk outside. Snacks, including a charcuterie plate, are also available.

For lunch, head to the simple but clean and welcoming Jacquie restaurant also near the main plaza. Lunch buffet is 25 BRL (about US$7.80) and includes a wide range of fresh food with plenty of vegetarian options and nice desserts.

Jacquie’s sister runs Juanita Restaurante which is known for heaping platters of grilled whole fish in various sizes cooked in capers. Meant for sharing, the platters also include rice, potatoes, and vegetables. The food is delicious and reasonably priced and the outdoor tables are a breezy place for a beer. 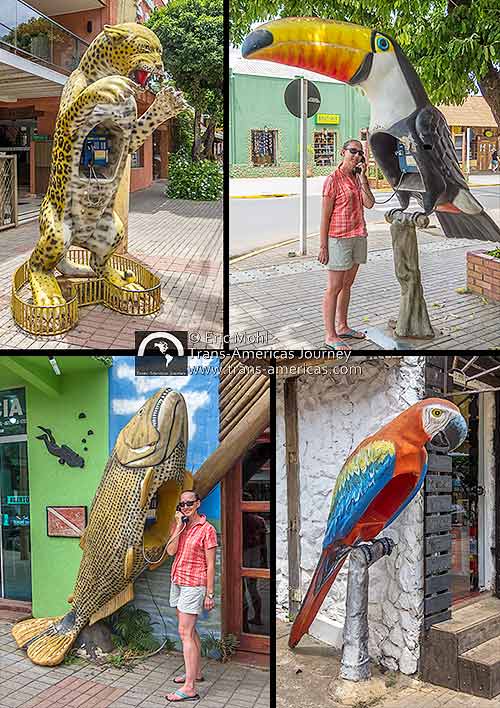 Karen hates talking on the phone unless the phone is an oversized version of a jungle animal.

The best way to imagine a Brazilian pastel is to picture a huge, rectangular fried wonton with a filling. At Pastel Bonito they whip up a wide-range of pastels (5 BRL to 15 BRL or about US$1.50 to US$4.75) including one filled with caiman.

To get the most out of Bonito you really need a vehicle. Public transportation doesn’t really service the sights you want to see and tour companies offer van transport as part of their group tours, but they can be pricey. You may have read that there is no way to rent a car in Bonito, but that’s not correct. You can rent a car in Bonito through Localiza and Unidas in Bonito.