It’s official: the very popular and very busy border crossing from Arica, Chile to Tacna, Peru was the fastest border crossing on our road trip so far. Border crossing 101 travel tips are below and we hope you breeze through too. 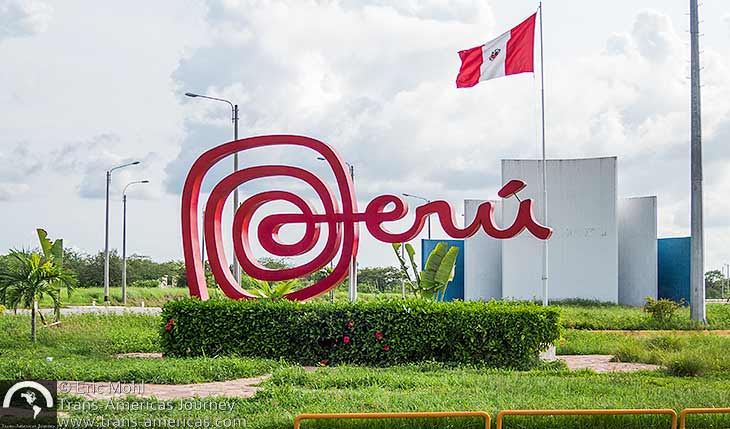 Lay of the land: We’ve crossed this border numerous times but this time we were pleased to see that border formalities have recently been consolidated into one building for Peru and Chile.

Elapsed time: An unbelievable 35 minutes from start to finish (10 am to 10:35 am). This is a record for us and one we doubt we’ll be able to improve upon, though we live in hope. It took about 15 minutes to exit Chile because we didn’t have the quadruplet forms needed and it took a minute to find the forms and fill them out. It took about 5 minutes to cancel our Chile temporary import permit (TIP). It took a further 5 minutes to get our TIP for Peru, which is now done in an efficient little office on the side of the building where entry stamps are given (look for the sign that says CIT). 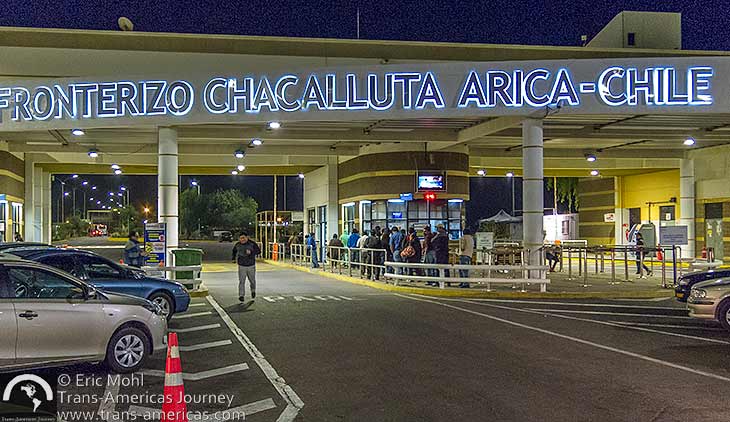 This is the building on the Arica, Chile side of the border where you used to stamp out of Chile before moving forward to the next building where Peruvian formalities were done. Now formalities for both countries are done in what was Peru’s facility and this building is used by both countries to process people leaving Peru and entering Chile.

Vehicle insurance needed: You must have SOAT coverage to drive in Peru and transit cops will ask to see it. You can purchase SOAT in Tacna which is about 25 miles (40 km) from the border. When we were in Argentina we bought SOAT coverage that covers us in multiple countries, including Peru, so we were all set.

Where to fill up: Fuel is marginally cheaper in Arica, Chile than it is in Tacna, Peru.

Need to know: You need four forms to cross from Chile into Peru (each is stamped and retained at a different stage of the process). You used to have to pay for these forms at this border, for reasons that remained a mystery, but the forms are now free in the new combined-formalities immigration building. Luggage is x-rayed at this border. Aduana (customs) officials asked us to x-ray the bags in the cab of our truck and two duffel bags from the back but didn’t seem to care about any of the other many bags and bins in the back of our truck. They did confiscate a banana. No fruits and vegetables are allowed to cross.

Also, be aware that the time changes between Peru and Chile from mid August to mid May (we gained two hours when we crossed into Peru from Chile in October, for example) because Chile is one of the few South American countries which observes Daylight Savings Time. So factor that in.

If you’re driving across the border in a non-Peruvian vehicle be aware that officials in Peru are very serious about their time limits, as they should be. Technically speaking, officials can confiscate your vehicle if you overstay its temporary importation permit. We found this out the hard way during a previous crossing when two blowouts on the highways delayed us. When we tried to cross 24 hours after our truck permit expired we were sent back to Tacna and told to visit the customs office. We spent  two days there presenting evidence of the blowouts, filling out forms in Spanish, and begging to be forgiven, which we ultimately were. The experience helped inspire this slightly snarky post about run ins at the border.

Overall border rating: Any border we can cross in 35 minutes gets an A+ from us.

If you cross late and need to spend the night in Tacna (bummer), Hotel Siglo 21 is a good bed. Around 65 PEN or about US$20 got us a private double with a bathroom, decent Wi-Fi, and ample parking plus breakfast. Not in the center, but close enough is Hotel Le Prince which is a bit pricier but still a bargain if you want something that’s trying hard to be hip and has a Netflix enabled TV. There’s a sister Le Prince hotel in Arica, Chile too.
Book Now