The northern coast of Peru is dotted with seaside communities but only Cabo Blanco can claim big fish, big celebrities (including Ernest Hemingway), and big waves. Our beach town travel guide helps you explore the past and the present in Cabo Blanco, Peru including what to do, where to eat, and where to sleep. 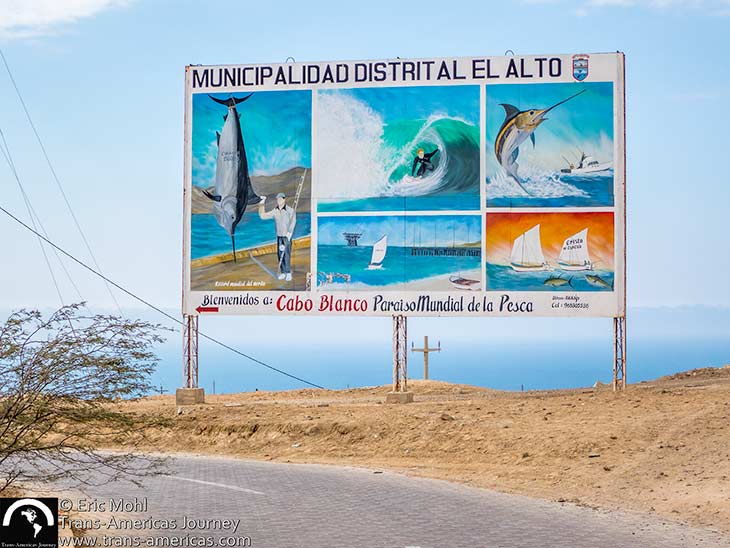 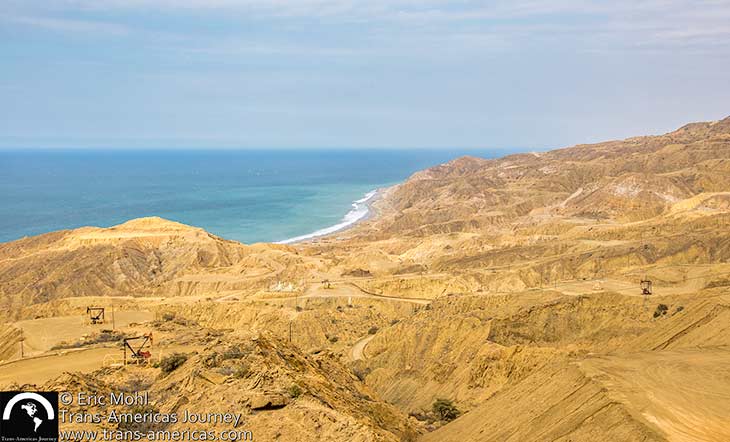 Our drive to Cabo Blanco took us through the desolate coastal desert that was absolutely strewn with garbage, a problem that plagues many areas of Peru. Some scrubby shrubs were so encased in plastic bags and paper waste that they looked like grim Grinchie garbage Christmas trees. 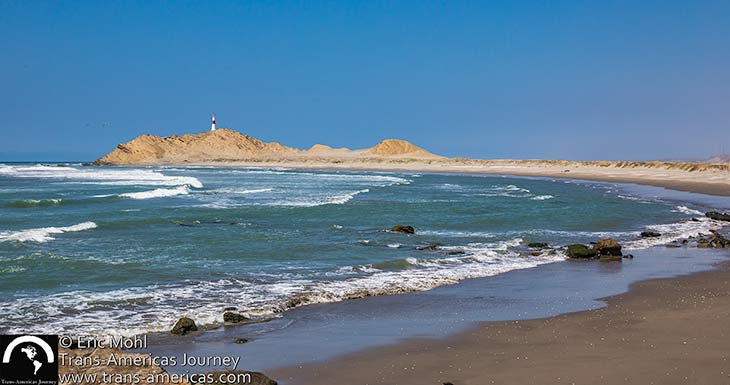 About an hour and a half south of Cabo Blanco we reached Punto Balcones which is the westernmost point in mainland South America. We saw dozens of flamingos, many salt-drying ponds, and lots of oil rigs before continuing on to Cabo Blanco which exists in a short and narrow strip of land wedged between the beach and a crumbling rocky cliff. where cactus and stray dogs seem to outnumber humans. 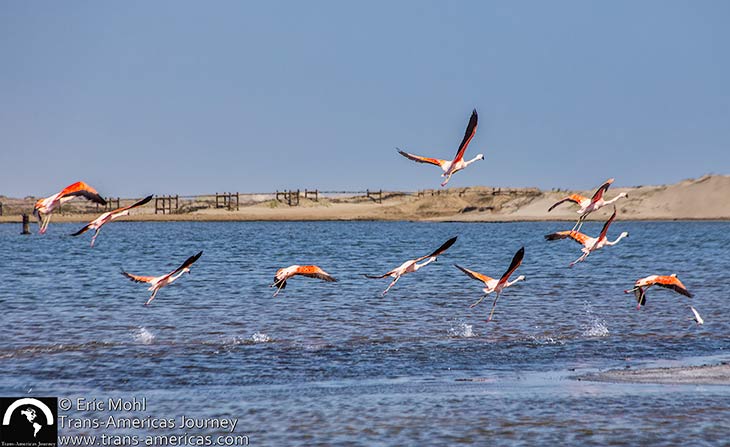 The record-breaking marlin of Cabo Blanco

Monsters put Cabo Blanco on the map. In 1953, a Texas oilman named Alfred C. Glassell Jr. caught a 1,560 pound (700 kg) marlin. It remains the biggest fish ever caught on a line, but others came close. More than a dozen marlin over 1,000 pounds (called granders) were caught in waters off Cabo Blanco that same year. The following year, 1954, another 16 granders were caught including a 1,525 pounder (692 kg)  that was landed by fisherwoman Kimberly Wiss. She still holds the women’s world record. Cabo Blanco itself is second on the list of destinations where the most 1,000+ pound marlin have been caught. But it was a brief run. Not a single grander has been landed in Cabo Blanco since 1968. 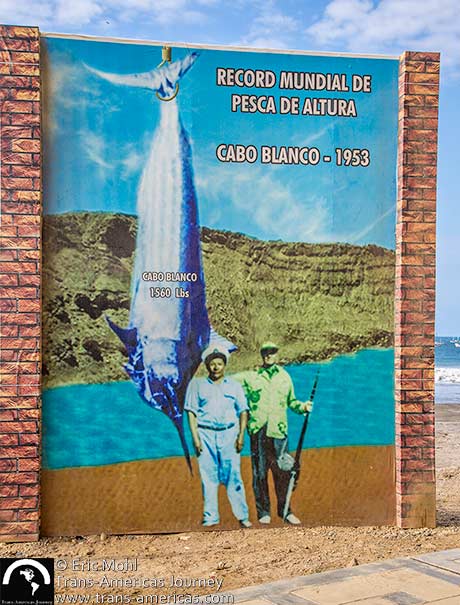 A reproduction of a photo taken of Alfred C. Glassell Jr. with his world-record monster marlin is displayed proudly in Cabo Blanco.

In the ’50s the fishing grounds around Cabo Blanco, where the cold Humboldt Current collides with the warmer Pacific Current, were dubbed Marlin Boulevard. As word spread about the remarkable fishing, Cabo Blanco began attracting celebrities including Marilyn Monroe, Paul Neman, John Wayne, Gary Cooper, Bob Hope, and Jimmy Stewart. Some came to fish. Some came to party.  Some came to do both. 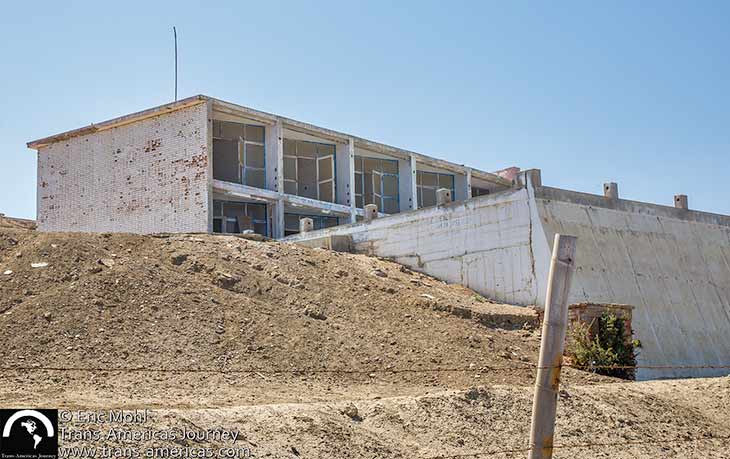 The abandoned and looted Cabo Blanco Fishing Club where celebrities partied in the 1950s.

Most of those famous faces used the Cabo Blanco Fishing Club as their hotel and playground. The walls of the club used to be adorned with huge trophy marlin, but we were told that all of the decor and memorabilia were looted after the club was closed in the 1970s. When we were in town, the club, which had a for sale sign on it, was clearly abandoned and was guarded by mean dogs and a huge fence.

Cuba may have provided the inspiration for Ernest Hemingway’s The Old Man and the Sea (which was his last full-length work), but Cabo Blanco provided locations for some of the scenes in the movie version of Hemingway’s epic tale of man vs. nature as an allegory for the nature of determination and loss. Footage of Alfred C. Glassell Jr. landing his world-record marlin were also used in the movie.

Shot in 1956, Hemingway himself came to Cabo Blanco during filming probably drawn as much by the project as by the chance to fish in the famous waters. He also found time to proclaim that the bloody Mary’s served at the fishing club were the best he’d ever tasted. 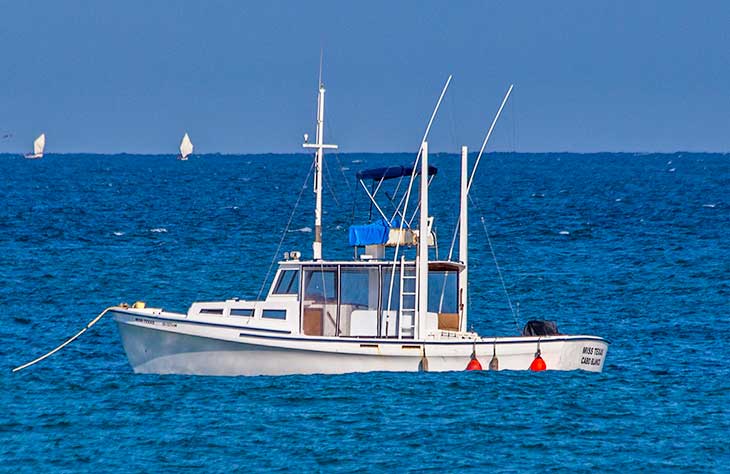 The Miss Texas, one of four custom boats originally made for the Cabo Blanco Fishing Club, was recently refurbished. Alfred C. Glassell Jr. caught his world record marlin on this boat and Ernest Hemingway fished on it too.

Hemingway did his fishing (he managed to land a 910 pound marlin) aboard a purpose-built vessel called the Miss Texas which we saw anchored off the beach when we were in Cabo Blanco. The Miss Texas was already famous before Hemingway went aboard. As one of the fishing boats at the fishing club, she was used by Alfred C. Glassell Jr. to land the monster we told you about above. 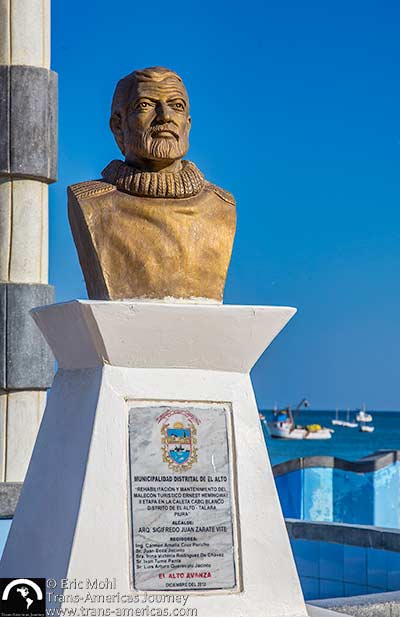 This bust of Ernest Hemingway is on the waterfront walkway in Cabo Blanco, Peru.

Hemingway may have only spent a few weeks in Cabo Blanco, but modern-day visitors will find his likeness everywhere including black and white photos of him on the walls of the Black Marlin Restaurant and a Hemingway bust on the malecon waterfront walkway which is also called the Ernest Hemingway Waterfront. 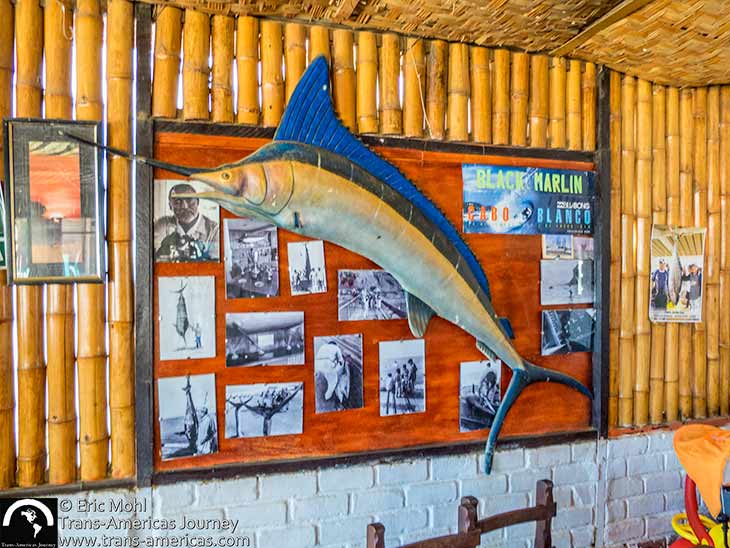 What to do in Cabo Blanco 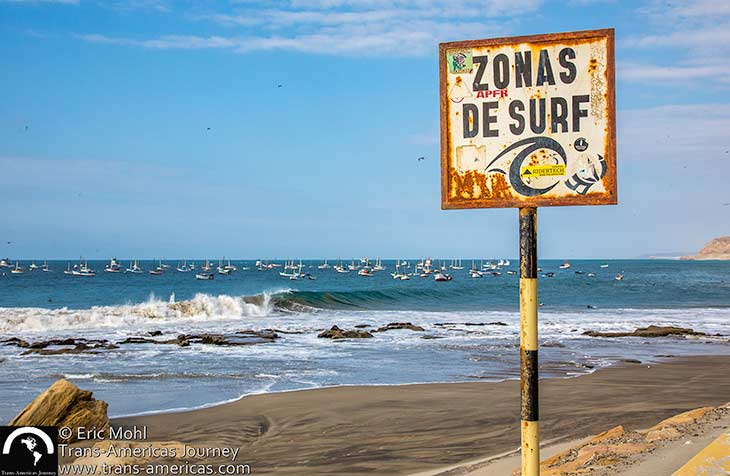 The big fish may be gone, but big waves attract a new kind of adventurer to Cabo Blanco.

The granders are long gone thanks to El Niño and overfishing, but a fleet of fishermen continue to ply the waters around Cabo Blanco using bulky wooden sailboats with high sides and flat bottoms. Ironically, they’re mostly fishing for tiny anchovies. 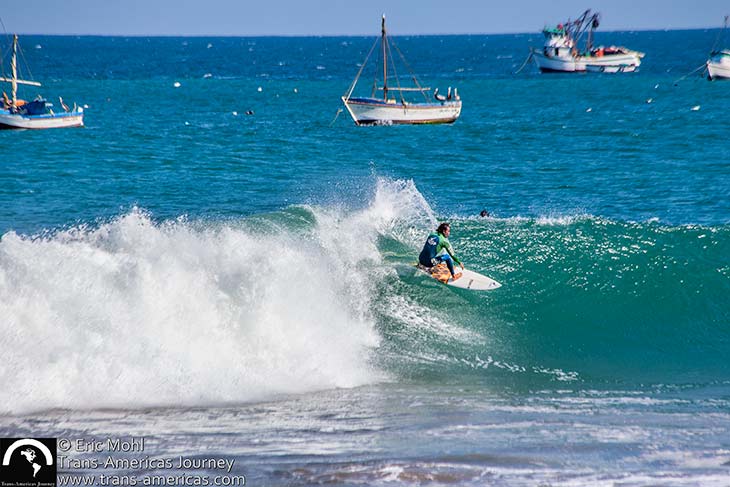 The left break in Cabo Blanco is famous among surfers.

The hottest thing to do in the water around Cabo Blanco these days is surfing. We were in town in early December near the start of the surfing season and we watched the early birds (mostly Peruvians) taking advantage of Cabo Blanco’s famous left break. We were told that the tube here is tricky and not a spot for beginners, but there are easier breaks nearby. 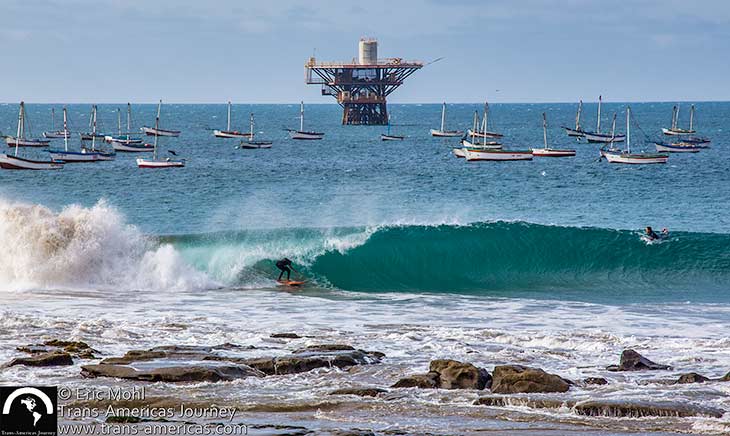 Where to eat in Cabo Blanco

Restaurant Cabo Blanco was the most stylish place to eat in town with a beachfront location, open-air layout, and cane and concrete architecture. Head to Black Marlin Restaurant for a seafood meal and to check out photos of Hemingway. 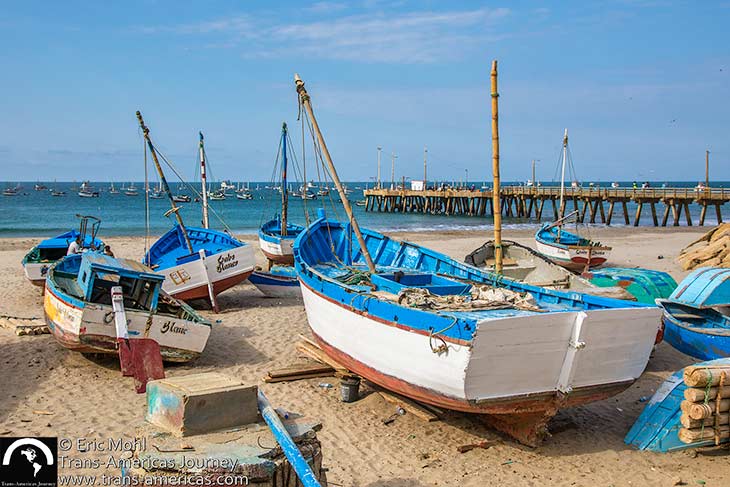 These boats now troll the waters around Cabo Blanco for anchovies.

Where to sleep in Cabo Blanco

We stayed at Hotel El Merlin which is on the beach with a great view of the break from the hotel’s indoor/outdoor roof lounge. It’s nothing fancy or particularly clean, but rooms are big and designed to be shared by surfers (the whole hotel is peppered with surf company stickers) including separate beds and two of everything.

For years, the Inkaterra group has been planning a luxury hotel about 2.5 miles (4 km) outside of Cabo Blanco near the fishing club. The company told us that the project, which is taking place in a lovely cove, is still going forward. However, the pandemic and other factors have delayed progress and there is still no opening date. Inkaterra also purchased and renovated the Miss Texas which it plans to use for sustainable fishing trips for hotel guests and other visitors. 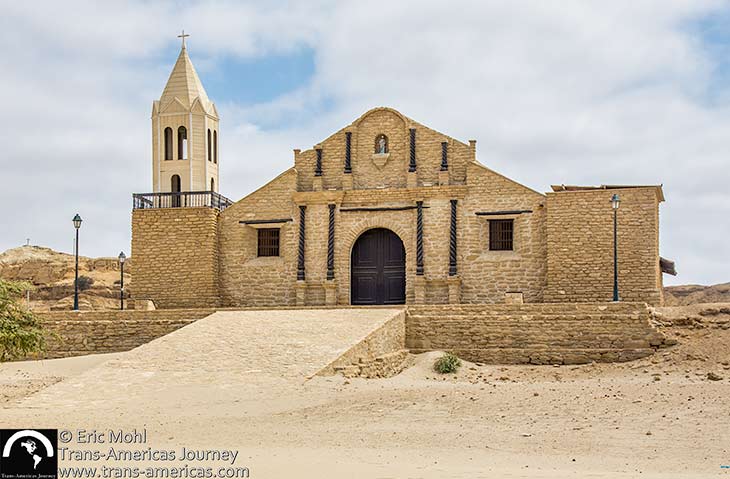 Iglesia San Lucas in the town of Colán is considered the oldest remaining Catholic church in South America.

If you’re heading south on your way out of Cabo Blanco (or traveling north to Cabo Blanco), detour to Playa Colán (about 2 hours south of Cabo Blanco and 45 minutes south of Punta Balcones) where you can check out the Iglesia San Lucas. Built in 1535, this is considered the oldest remaining Catholic church in South America (look for the Habsburg seal). That history, and construction elements like turned wood columns, earned this structure a place on Peru’s list of National Historic Landmarks in 1983. The church, located a few blocks inland from the sea, was built on top of a pre-hispanic temple created by members of the Tallan culture.

If you’re tempted to spend a night or two in pleasant Playa Colán, which is a popular destination for Peruvians and has a very laid-back vibe, you’ll find many simple guesthouses. We stayed at beachfront Playa Colán Lodge which offers 12 standalone bungalows (11 with sea views) with wood floors, lots of windows (with screens), and festive paint jobs (pale pink, pale turquoise, etc.). There’s a pool, lots of shaded areas with tables and chairs, and one of the only beachfront restaurants in town plus Wi-Fi, continental breakfast with good coffee, and a secure parking lot.