The main reason to travel to Cahuita on the Caribbean Coast of Costa Rica is to explore Cahuita National Park. We certainly did that, but we also found great food, an amazing bargain hotel, and sloths in the city. 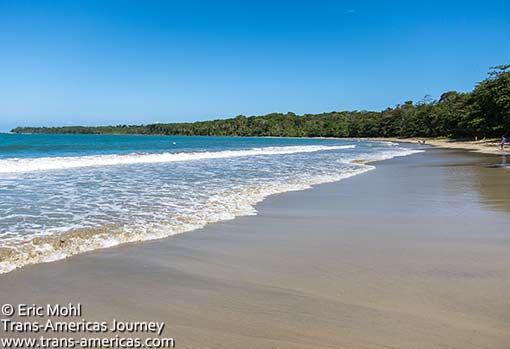 There are two entrances to Cahuita National Park. The most convenient entrance from the town of Cahuita is the Kelly Creek entrance which you can easily walk to from the southern end of this small town. When we visited the park there was no mandatory entrance fee at Kelly Creek, just a donation of your choosing. This was a pleasant surprise and a help to the old travel budget since most national parks in Costa Rica charge US$10 per person.

There are toilets, showers, and picnic tables right at the Kelly Creek entrance and many visitors never make it any further into the park, preferring to just kick back on the beach. However, there’s much, much more to see.

Cahuita National Park protects 2,732 acres (1,100 hectares) of land and 55,200 acres (22,338 hectares) of marine area including a major reef system. The beach here is lovely with wide sloping angles and nearly white sand. Snorkeling is allowed in some areas of the park but you must take a guide and they charge US$25 per person. 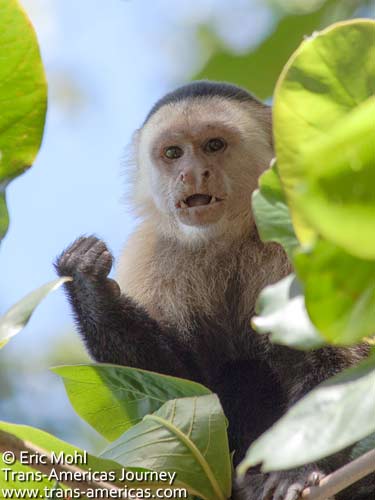 It only looks like this capuchin monkey was shaking its fist at us as we hiked by it in Cahuita National Park on the Caribbean coast of Costa Rica.

Hiking in the park is free. A 4.5 mile (7 km) trail runs through Cahuita National Park and it’s a lovely walk–mostly shady and often so sandy that you can take your shoes off (though not always so wear good hiking shoes for the rough sections). We saw howler monkeys, capuchin monkeys, and lots of raccoons as the trail hugged the shoreline, then undulated inland before returning to the water’s edge. It felt like a less spectacular, but also far, far less crowded, version of Manuel Antonio National Park.

Even if you’re an experienced hiker, heed the many posted warnings about staying on the trail in Cahuita National Park. The tropical rainforest here is thick and disorienting and it’s also home to pit vipers and eyelash vipers–both venomous. A friend of ours spent 11 hours bush whacking through the rainforest after wandering off the path. He only barely found his way out before dark but not before his unplanned “adventure” left him with plenty of cuts, scratches and bug bites. 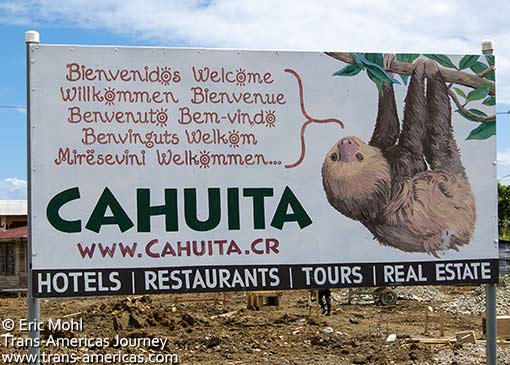 Sloths are basically everywhere you look in Cahuita.

For a small town on Costa Rica’s less visited Caribbean coast (many more people visit the Pacific coast side for some reason), there are a lot of lodging options to choose from running the gamut from bare-bones shared dorms to solid three star offerings like Playa Negra Guesthouse.

French-Canadian owned, Playa Negra Guesthouse spreads out around a private garden behind an ivy-covered wall. There are spacious and spotless rooms and multi-bedroom cottages in festive Caribbean colors. The cottages have full kitchens too and there’s a small pool as well with an “honor fridge” stocked with cold beers going for bargain prices. It’s a peaceful environment with more amenities than most other accommodations in Cahuita.

Playa Negra Guesthouse is located roughly 10 minutes by foot from the center of Cahuita past Playa Negra which is so named because the sand is nearly black. This remains a mystery to us since the beaches inside Cahuita National Park were so white.

We also stayed in a few of the many budget hotels in Cahuita itself and the standout was Cabinas Palmer where US$20 got us a clean private double with bathroom, fan, TV, a furnished porch with a hammock, free coffee and bananas all day, use of a shared kitchen, parking, and Wi-Fi. It’s right in the center of town, just ask for it when you arrive and tell Jaime, the manager, that the Trans-Americas Journey sent you!

The lodging options in Cahuita are only out-numbered by the eating and drinking options including a couple of typical eateries where you can get a Costa Rican casadao (set meal) for a good price. There are also quite a few spendy seafood, Italian, and international restaurants.

Somewhere in between lies Surf Caribbean Food which is on main street not far from in from the Kelly Creek park entrance. We wandered in, drawn by the festive painting on the tables and back wall and by the reasonable prices on the diverse menu.

Plus, they had chifrijo which is a meal in a bowl packed with rice, beans, chopped tomatoes, spices, and succulent pork (they serve a vegetarian chifrijo if, for some mysterious reason, you don’t want the delicious pork). Chifrijo, which was invented in the ’90s as a combination of chicharon (chi) and frijoles (frijo), has become a kind of official dish of Costa Rica, but it’s not easy to find so we jump at every chance we get to enjoy it. We were not disappointed at Surf Caribbean Food. 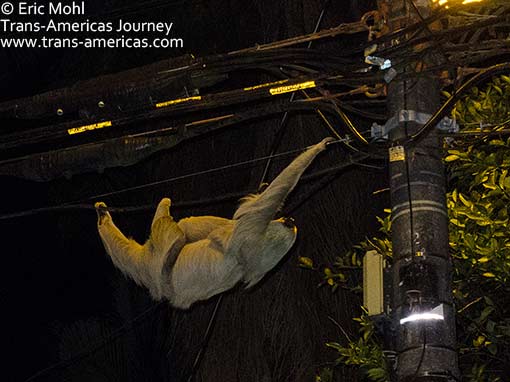 What about those sloths?

One night as we were returning to our room we noticed a small crowd peering up toward the sky. They were watching a mother sloth slowly negotiate her way along the telephone and electrical lines which run above the streets in the town center. Her baby clung to her body as she carefully made her way hand-over-hand-over-foot-over-foot. 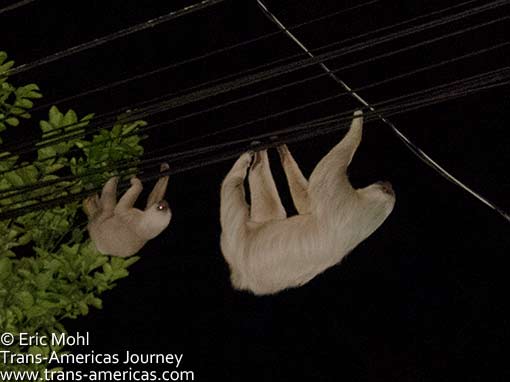 Baby’s first steps! A baby two-towed sloth follows its mother along telephone wires above the town of Cahuita on the Caribbean coast of Costa Rica.

It sure seemed like this was mama sloth’s first time on the high wire and we were grateful that she seemed to know to stick to the lower cables which were harmless telephone wires. The upper tangle of cables are electrical and they’re uninsulated, meaning one touch and the sloth would be dead. Electrical wires are actually a major cause of death for sloths in Costa Rica. 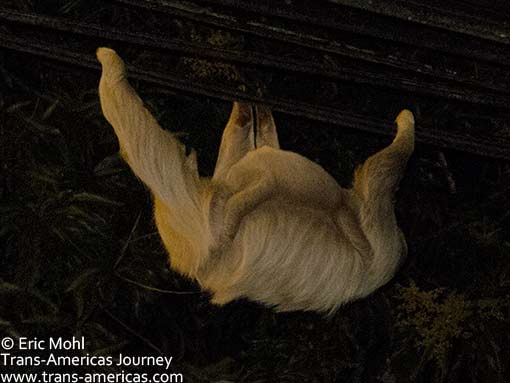 This mother sloth is spotted in town most nights and we subsequently saw her baby taking a few tentative steps on the wire and then saw a different sloth on the ground right across the street from Cabinas Palmer. 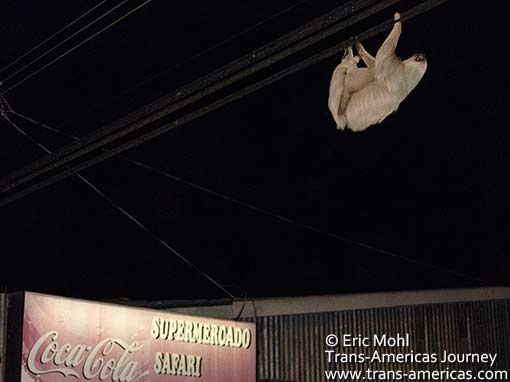 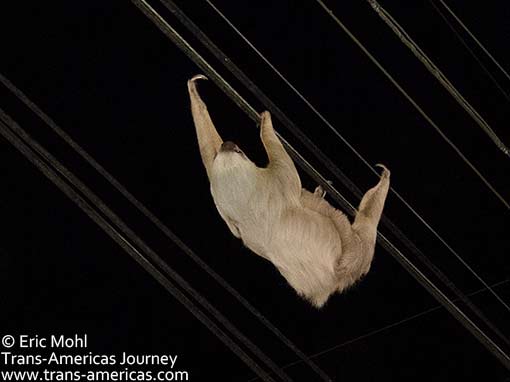 Think sloths are slow, lazy, and shy? Check out how this mama moves along the wires above Cahuita in our video, below. 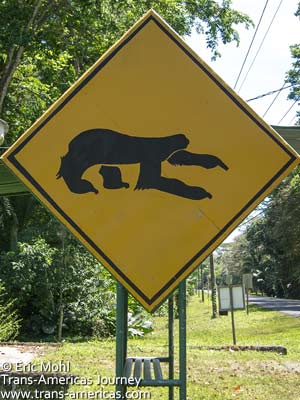 Sloths adorn the bus stop in front of The Sloth Sanctuary on the Caribbean coast of Costa Rica.

The Buttercup Tour (named after a particularly charismatic resident sloth) is US$25 per person while the Insider’s Tour is US$150 per person. Why so pricey? You get to visit the sloth hospital and other behind-the-scenes facilities on the Insider’s Tour.

After a brief closure, the sanctuary has also re-opened its B&B operation so if you just can’t tear yourself away from these amazing/freaky/cute (in the dictionary sense of the word, look it up) creatures you can just stay and spend the night.

And don’t miss our totally unscientific post about the Top 5 Sloth Lies.