The Mayan city of Calakmul, one of the largest, most powerful, and most important Mayan cities ever discovered, had sophisticated infrastructure, including the largest Mayan reservoir ever found, and a massive amount of land and buildings. The so-called Snake Kingdom even had a  logo–an emblematic snake head has been found all over the place. And the place is still imposing today. 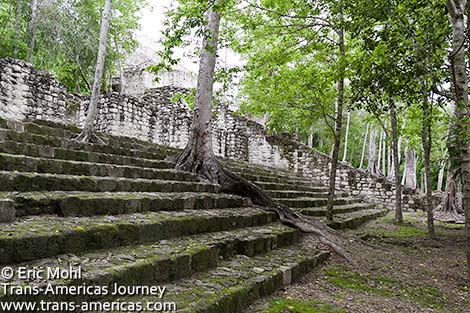 The Calakmul Mayan archaeological site in Mexico is home to some of the most massive temples in the Mayan world.

The troubled past of Calakmul

Calakmul reached the height of power during the Classic Period (250 to 900 AD) and the city/kingdom once had 50,000 inhabitants and ruled the land up to 90 miles (150 km) away. Calakmul’s cross-town rival, however, was Tikal to the south in what is now northern Guatemala. Among other differences, Tikal was all about male rulers while Calakmul emphasized joint male/female rule. There are even some carved stone stele at Calakmul depicting queens. Tikal finally dominated, but not before Calakmul put its stamp on the Mayan world.

The journey through the jungle to reach Calakmul, a UNESCO World Heritage site since 2002, is definitely part of the adventure. Located within the Calakmul Biosphere Reserve, which covers 14% of the state of Campeche, the roughly 30 mile (48 km) drive off the highway takes you through a slice of one of the largest protected areas in Mexico until you finally reach the archaeological site itself.

During our early morning drive to the site, over a mostly well-paved road, we saw two deer, a toucan, and a grey fox. The preserve is also home to pumas and more than 250 species of bird. 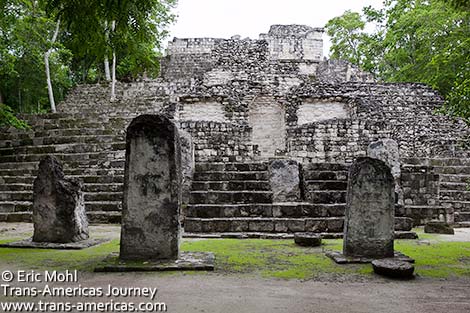 Structure IV is really a group of three temples built on the foundation of an older Preclassic period temple. This group of buildings may have been used to determine the solstice. The number of stelae in front of it is remarkable.

That jungly feeling continues even after you’ve entered this archaeological site. The core areas of Calakmul include roughly 1,000 structures covering nearly a square mile, however, that’s a mere fraction of the nearly 40 square miles of civilization and 6,500 structures believed to still be hidden in the ever-encroaching jungle. 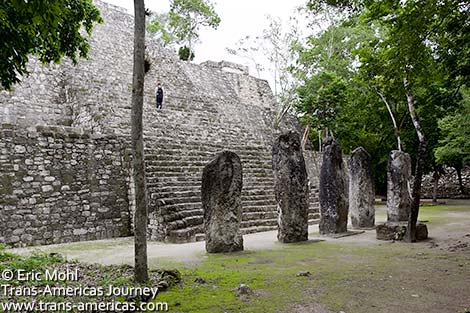 Structure VII is a nearly 80 foot (25 meter) high temple on the north side of the Central Plaza at Calakmul with five stele in front of it.

Calakmul is a vast site (allow at least two hours) but there’s a prescribed walking route that pretty much ensures  you won’t miss anything. In addition to the remarkable stele, Calakmul offers a number of awesome temples, some of the biggest and highest in the region, that can (and should) be climbed. 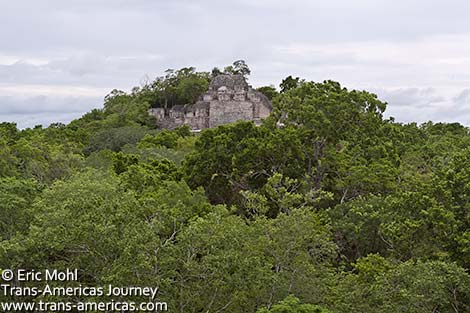 The nearly 150 foot (50 meter)  high Structure II (one of the largest in the Mayan world) as seen from the top of Structure VII.

Only by climbing the temples can you really appreciate the layout of the city below you, the impenetrability of the jungle and the shape, size and placement of the other temples. Also, the tops of the temples provide relief from the heat and the mosquitoes because a breeze reaches their pinnacles which poke through the dense jungle. 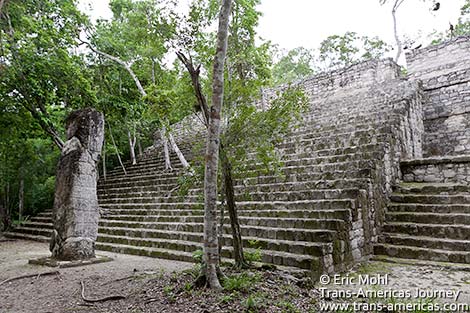 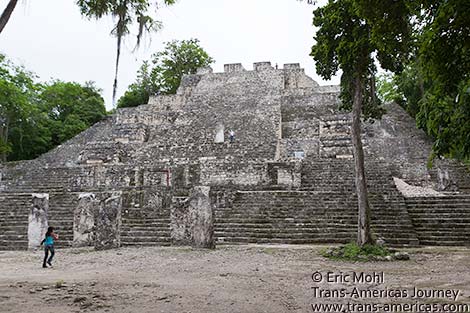 Structure II is one of the largest buildings in the Mayan world.

At just shy of 150 feet (50 meters) high and nearly 400 feet (120 meters) across its base, Structure II is one of the largest buildings in the Mayan world. It’s also a great climb which is rewarded with a cooling breeze and views across the city. On a clear day, you might even be able to see the remains of El Mirador archaeological site in Northern Guatemala. 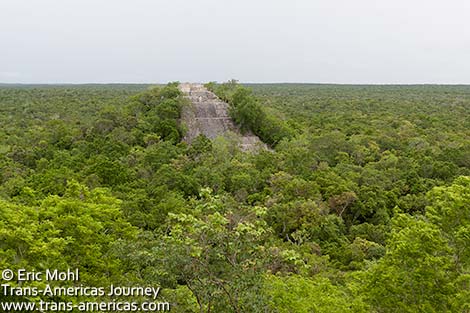 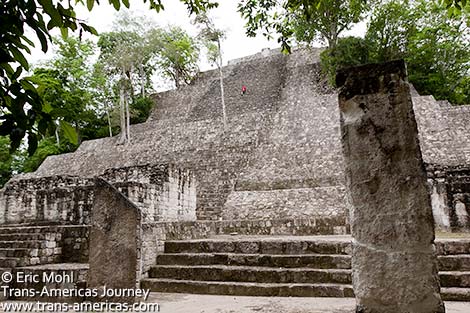 Structure I seems to be higher than Structure II because it was built on a slight hill. The stele in front of it date back to 731 AD.

One of the reasons UNESCO made Calakmul a World Heritage site is the city’s collection of stele. Almost every important structure in the excavated area has at least one remaining carved stone slab, often depicting intricate historical and political facts about the city and the kingdom. 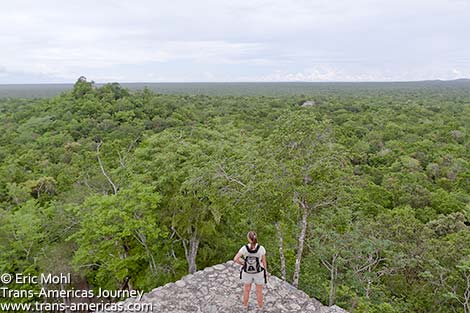 Karen surveying the Mayan world at Calakmul from the top of Structure I.

Because the Calakmul archaeological site is within the vast Calakmul Biosphere Reserve there is no nearby town, unless you count Xpujil which is quite a way away and something of a hole. Therefore, the most comfortable and convenient place to stay before and after your visit to Calakmul is Hotel Puerta Calakmul. 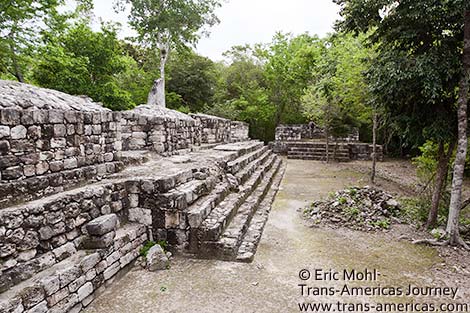 Part of what experts believe was a residential complex at Calakmul–like a Mayan suburb.

Located just off the highway and right at the entrance to the Calakmul Biosphere Reserve, Puerto Calakmul has 15 stand-alone bungalows with hand-made log and branch furniture, polished concrete floors, modern bathrooms, and (most importantly) very good screens. The hotel put us up in bungalow #11 and one morning we had flamboyant ocellated turkeys in the backyard and a small family of howler monkeys in the front yard.

Also, we’re pretty sure the concept of the air being “thick” with mosquitoes was inspired by the swarms in and around the Calakmul Biosphere Reserve. We actually broke out our electronic mosquito swatting tennis racquet and went to town in an attempt to kill enough of the little biters to be able to relax on the little porch in front of our bungalow. It didn’t work, but the hundreds of zaps were satisfying nonetheless.