They call the Calgary Stampede the richest rodeo in the world because it awards a million dollars in prize money. 2011 marked the 100th anniversary of the annual event which is held every July. This got us reminiscing about our visit to the “Greatest Outdoor Show on Earth” when we traveled to the Calgary Stampede in Canada early in our Trans-Americas Journey. 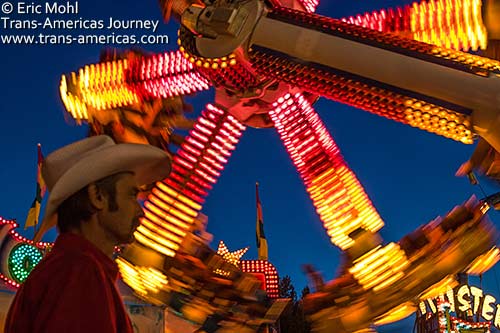 The Calgary Stampede isn’t just the world’s richest rodeo. It’s also a full-on fair with the rides and food to prove it.

Inside the Calgary Stampede

In addition to the rodeo events, the Calgary Stampede also features a whole concourse of carnival rides and all manner of fair food including the usual suspects (hello, corn dogs!) plus a local cult favorite called Mini Donuts—basically tiny, tiny donuts that everyone buys and eats straight from the bag right before they get on a big, fast, spinning carnival ride. What could go wrong? 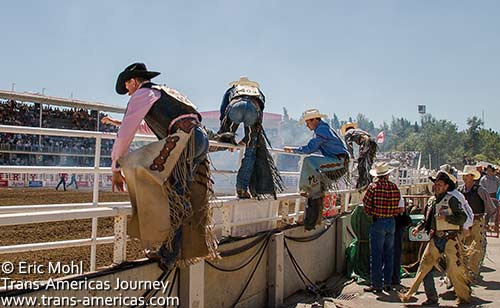 Cowboys commute to work at the Calgary Stampede.

Classic rodeo at the Calgary Stampede

The main attractions, for us, were the classic rodeo events during which we watched dozens of the best cowboys in the world compete for some of that famous Calgary Stampede prize money. We were amazed by the athletes both human and non human. Here are some photographic highlights from each event. 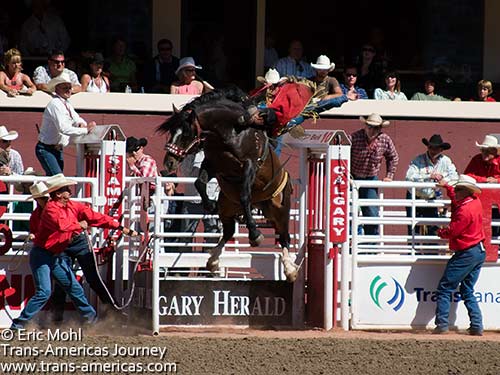 This amazing athlete leapt about four feet straight up into the air the moment the gate was opened. The cowboy was no slouch either. 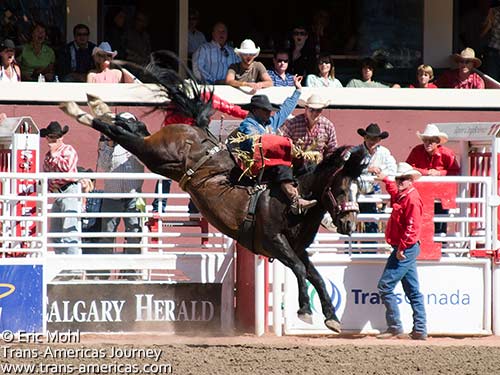 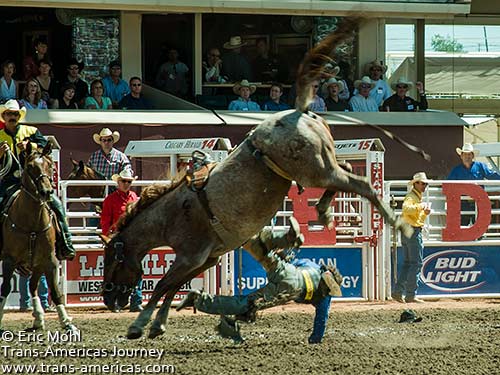 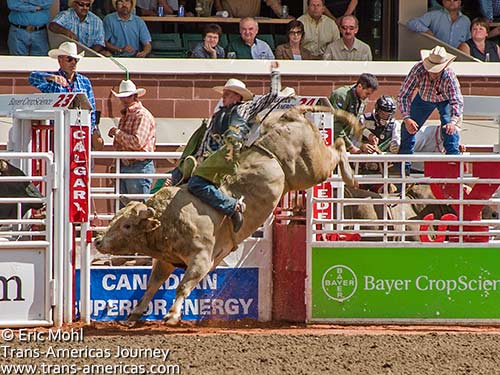 The bulls, mostly bred on the official Calgary Stampede farm, were huge and smart. In other words, very, very dangerous. 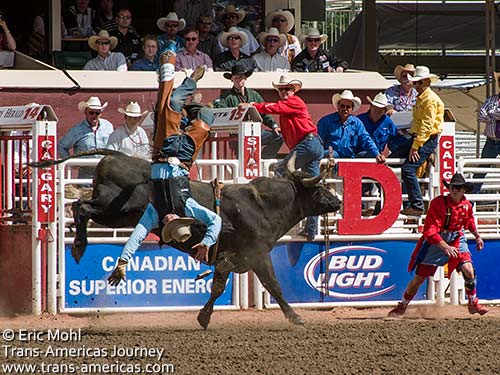 We have no idea how this cowboy ended up in this position. We can tell you he got up and walked away. 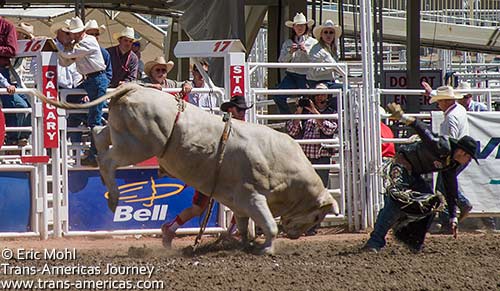 Some of the bulls were just plain mean, too. 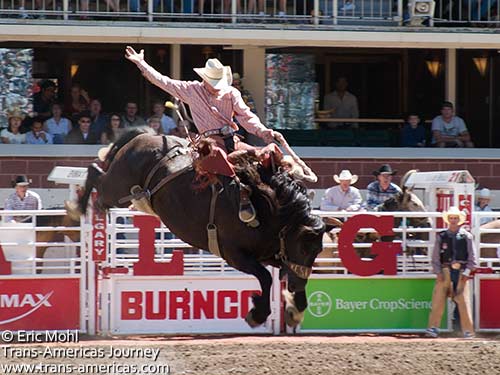 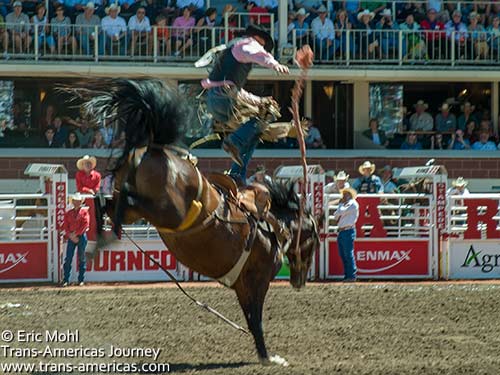 That’s one way to dismount… 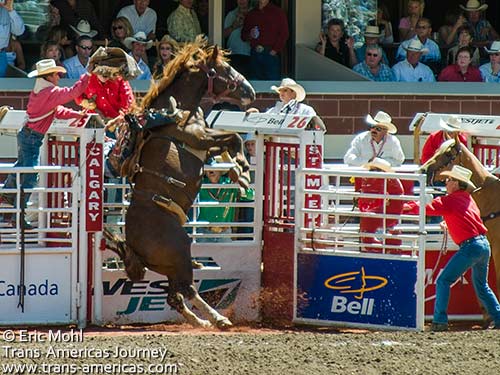 Everyone in the stands held their breath, wondering if this horse was going to fall over backward after this dramatic exit from the gates. It did not fall over and it’s moves just got more athletic and unbelievable as the ride continued. 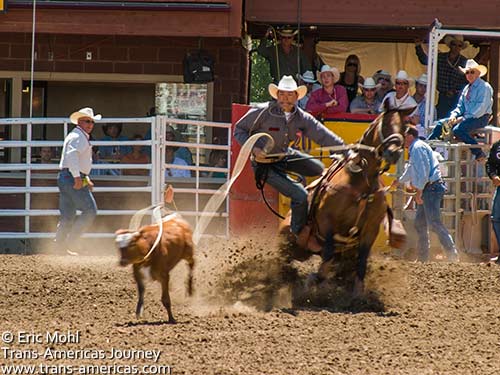 In this event you need a racehorse with anti-lock brakes.

The goal is to catch, rope, and tie down a calf as quickly (under 10 seconds) and precisely as possible. These experts make it look easy as you can see in our animated gif, below. 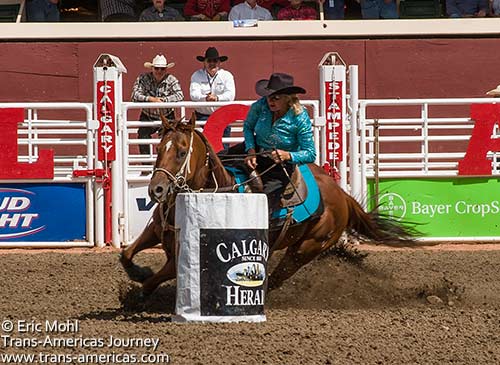 Barrel racing is the only event at the Calgary Stampede in which women compete. Champion June Holeman, above, was 63 when we watched her win the event with this ride. 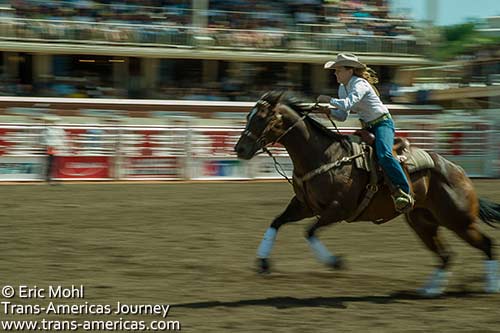 This barrel racer was narrowly beaten by veteran champion June Holeman during the Calgary Stampede. 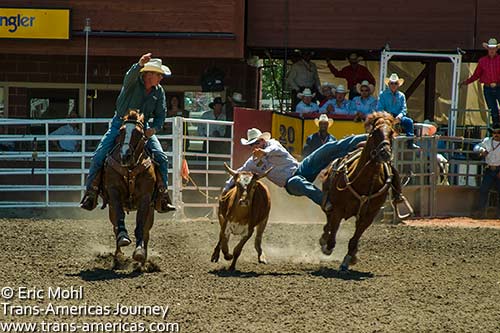 First, leap off a galloping horse then, literally, grab a steer by the horns. 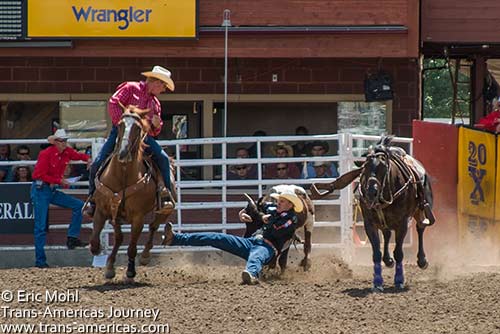 Cowboys dig their heels into the ground and use them like brakes in order to stop and flip the steer.

The biggest adrenaline rush of the entire Calgary Stampede came from a competition which isn’t, technically, a rodeo event. We’d never even heard of chuckwagon races but we were soon hooked. 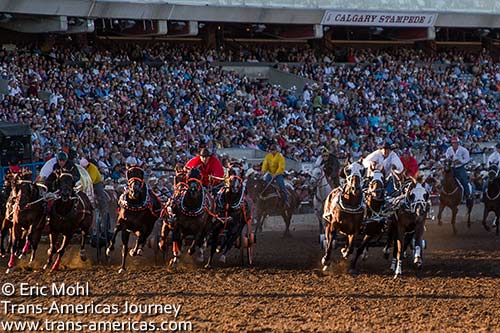 We’d never even heard of chuckwagon races before we attended the Calgary Stampede. Now we’re huge fans of the history and controlled chaos of this event.

At the beginning of each race all four outriders from each chuckwagon team must dismount. One of them throws a barrel into the back of his team’s chuckwagon and another tosses in poles, a tarp and other gear. Then the chuckwagon speeds off as the four outriders re-mount on the gallop so the whole team of five men and 32 horses can fly through a figure eight course before thundering (the ground literally shakes) around an oval racetrack in a frantic bid to beat three other teams doing exactly the same things at exactly the same time.

Chuckwagon racing is (barely) controlled chaos as 15 men and 96 horses race around the track at the same time. Get a taste of what it looks like in our animated gif, below.

If you ask us, chuckwagon racing is the new extreme sport. But you can judge for yourself since we have plenty more action-packed Calgary Stampede Chuckwagon Race Photos. 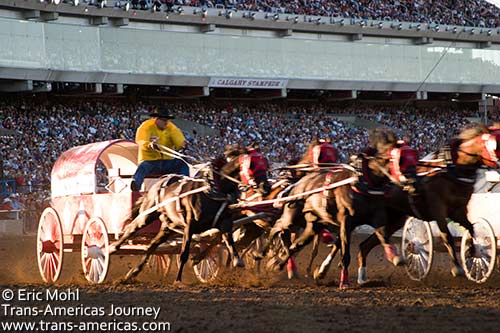 The ground shakes as teams push to the finish line in the chuckwagon racing event at the Calgary Stampede.

We were so inspired by the whole Calgary Stampede experience that Karen finally gave in to her decades-old desire for a pair of true cowboy boots. Since this is no faddish whim, we headed straight for the Alberta Boot Company. Listen, if they’re good enough to supply boots to the Canadian Mounties, they’re good enough for us. Karen is still wearing her Alberta Boot Company boots, by the way, and she gets compliments on them all the time. 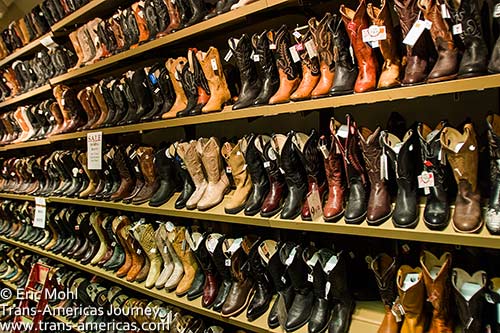 Good luck picking a favorite from the hundreds of handmade styles at the Alberta Boot Company in Calgary.