It’s pretty easy for one archaeological site to run into the next when you’re traveling through northern Peru where it seems like there are culturally significant sites at every turn. The Caral archaeological site, however, stands out from the crowd thanks to its age–which was recently determined to be even older than previously thought. Now, some experts speculate that Caral may be the oldest inhabited place in Peru.

An overview of the Caral archaeological site with its signature mud and stone mounds and excavated tiered pyramids clearly visible.

The Pre-Columbian Sacred City of Caral-Supe (which everyone just calls Caral) is now believed to be at least 5,000 years old. That means this civilization, created by the Caral people, dates back to around  2,600 BC which is about the same period of time when the Egyptians were making plans to build the pyramids. 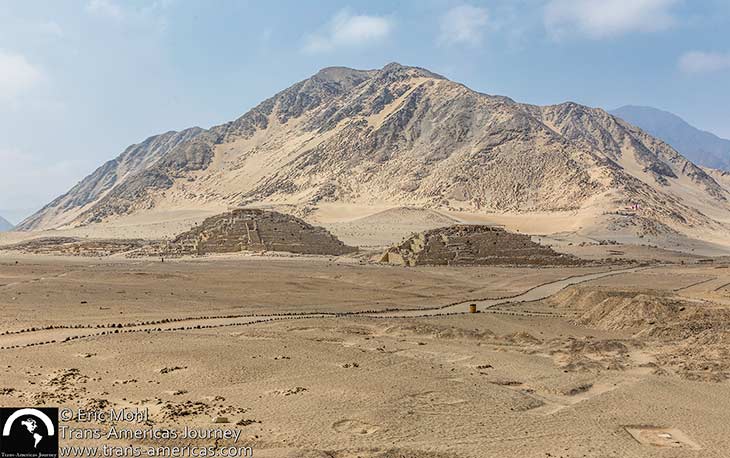 Tiered pyramids at the Caral archaeological site rise up like sculpted dunes.

The Caral archaeological site, which was known to researchers as early as 1905, wasn’t seriously explored until the 1990s. Subsequent digs at the 1,500-acre complex unearthed houses, pyramids, plazas, and irrigation systems. This sparked the interest of Peruvian archaeologist and anthropologist Ruth Shady who dedicated years (and her own funds) to study the site. 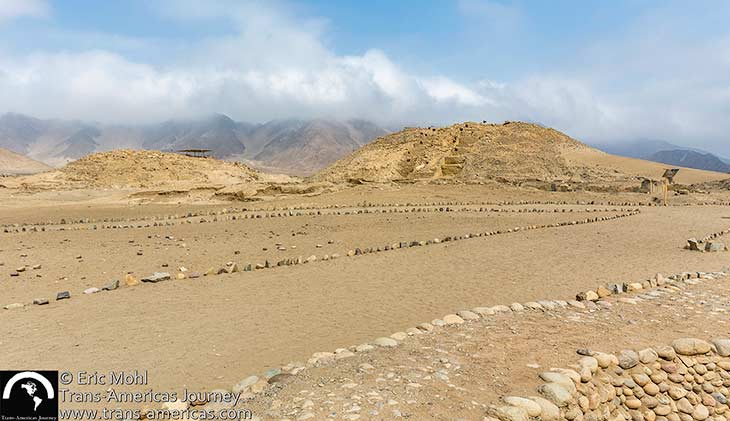 Central Pyramid and Cantera Pyramid at the Caral archaeological site in Peru.

In the early 2000s, Shady and her team made discoveries at the Caral site that were able to be carbon dated. The results showed that the Sacred City of Caral-Supe, which was named a UNESCO World Heritage Site in 2009, was much older than previously thought. If this ancient city really does date back as much as 5,000 years, as some now believe, this makes Caral the oldest inhabited place in Peru, one of the oldest known cities in the Western Hemisphere, and as old or even older than the oldest known pyramid in Egypt. 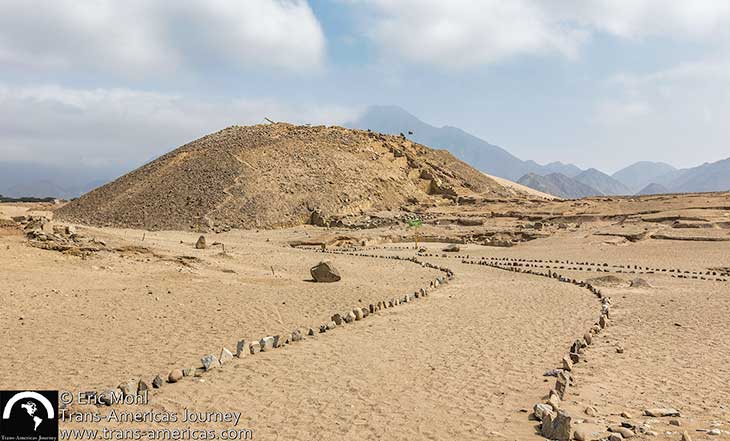 The Caral archaeological site (11 pesos or about US$3 per person including a mandatory guide, last entry is 3 pm) is 175 miles north of Lima. The final access to the site is via a 40-minute drive down a mostly-paved road off the PanAmerican Highway which travels through an area that’s dotted with other archaeological sites including some unexcavated sites right along the road. Quite close to the Caral site, the road crosses a river which can be impassable during heavy rains that can occur between December and March. 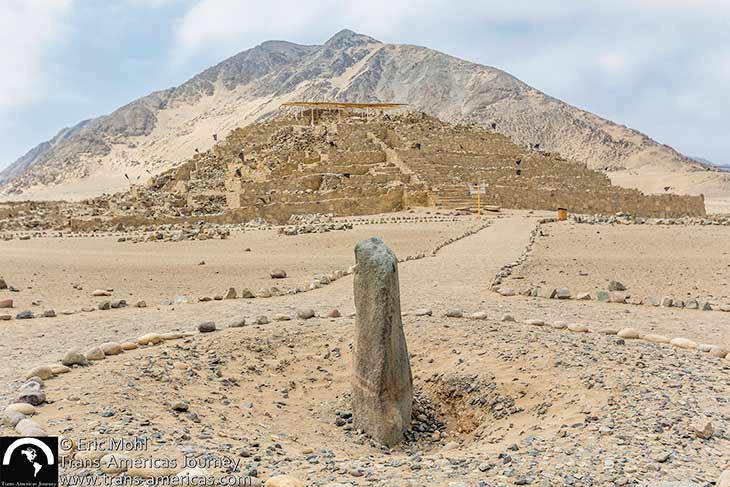 Our guided tour (tips appreciated) lasted about an hour as we walked through Caral along flat, sandy trails which were exposed to the sun (wear sunscreen and a hat). The site is broadly composed of six stone platform mounds. The biggest one is 490 feet (150 meters) by 525 feet (160 meters). There are also two sunken plazas, thought to be the site of ceremonies, and residential structures and neighborhoods. 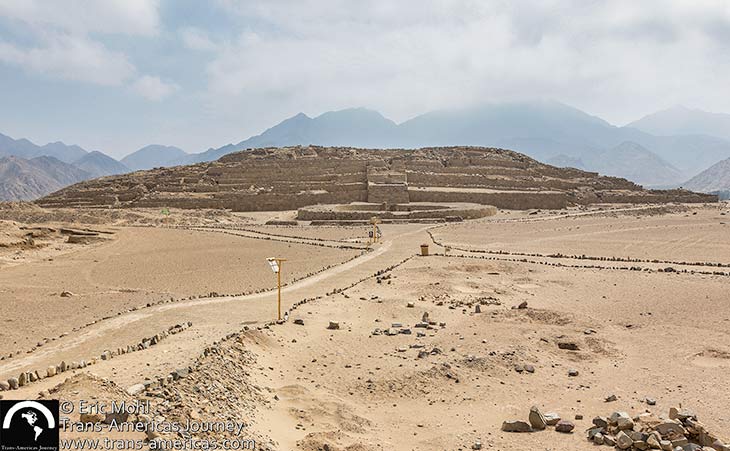 Mayor Pyramid with its signature circular plaza at its base.

Highlights of the Caral archaeological site included the massive Mayor Pyramid which covers an area roughly the size of four football fields and has a sunken circular plaza at its base. The three-tiered pyramid rises to a top level where experts found an atrium and a large fireplace. 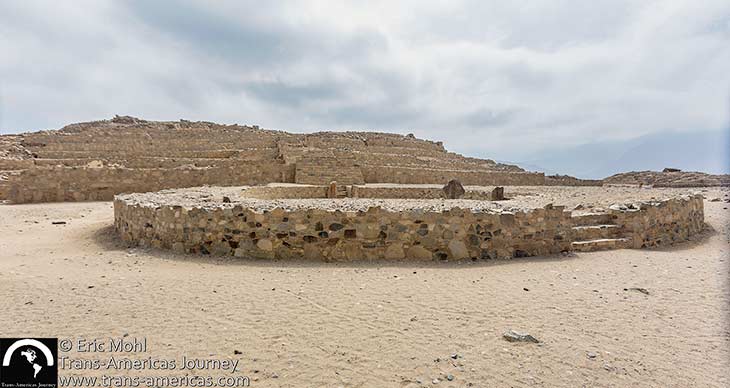 Mayor Pyramid with its circular plaza in the foreground.

Another noteworthy find at Caral is a stash of 32 flutes made out of condor and pelican wing bones. During Shady’s work at the site, she and her team also found 37 cornets made out of llama and deer bones. 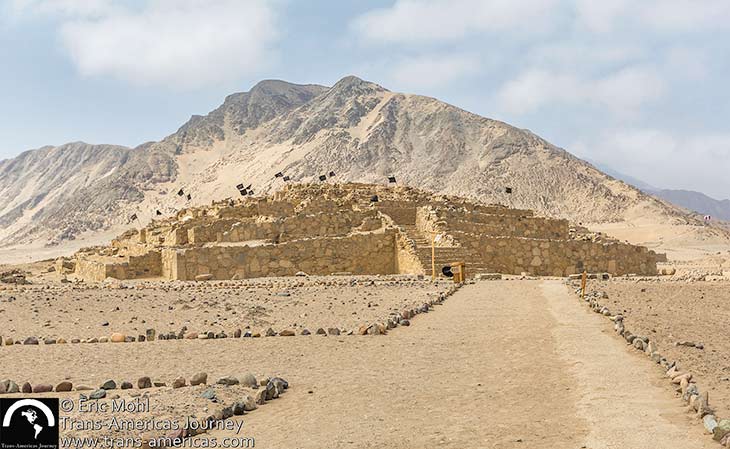 The black flags placed around the Menor Pyramid (above), and other areas of the Caral archaeological site, are meant to scare away nesting birds that damage the site.

When we were at the Caral archeological site, the area was adorned with black plastic flags which, we were told, were put up to deter swallows from nesting in the ruins since their acidic nests are harmful to the structures.

An amphitheater at the Caral archaeological site.

There is an ample visitor area at the Caral archaeological with bathrooms and a very small museum where you can see more from this culture, including whale vertebrae that may have been used as stools. 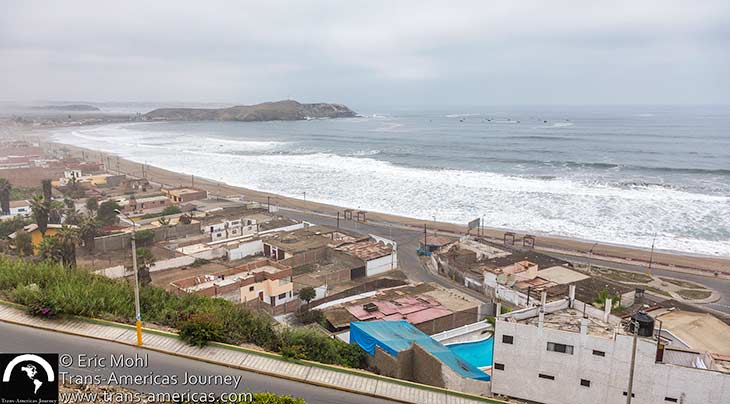 The Caral archaeological site is just 35 miles (55 km) from the fairly unattractive coastal town of Barranca. We overnighted there at Hotel Los Delfines, located on a bluff above the arc of Playa Los Chorrillo, where garden-facing rooms went for 85 soles (about US$23) and upstairs ocean-facing rooms with balconies went for 95 soles (about US$25). We splurged on an ocean view room.  The hotel also has a pool and a large secure parking area. 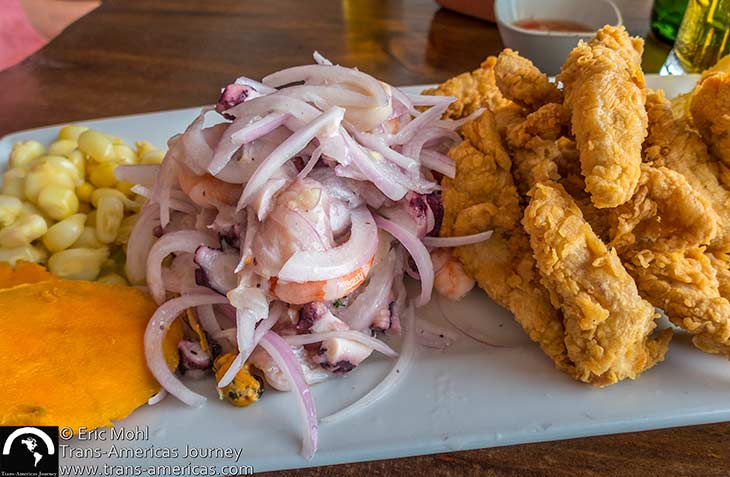 We grabbed an early dinner of fresh seafood at a beachfront restaurant called Jota Restobar. In 2021, this beloved Barranca restaurant’s ceviche was named Best Ceviche in Peru during the annual Mistura food festival in Lima.  We ordered a sampler plate (pictured above) that included mixed fish and seafood ceviche that was fresh, tender, spicy, and delicious plus chicharron de pescado (fried fish) which was light and tasty.