Everyone told us the same thing: if you really want to see Carnival in Panama (called Carnaval in Spanish) you have to see it in Las Tablas on the Azuero Peninsula. Sure there are Carnival celebrations throughout the country, including in Panama City. But Las Tablas is where the traditions and the partying have reached new heights and it all starts on the Friday before Ash Wednesday with the crowning of not one but two Carnival queens. 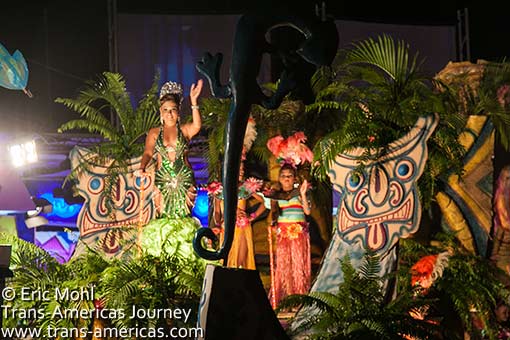 Friday night Carnival festivities in the town of La Villa de los Santos were kicked off by the appearance of the outgoing Calle Arrriba Carnival queen in a dress that mostly cut-away.

Two Carnival queens are better than one

Carnival in Panama is reigned over by a pair of Carnival queens, one for Calle Arriba (high street or uptown) and another for Calle Abajo (low street or downtown). Queens are chosen for each neighborhood based on which part of town the queen’s mother is from. Your mom’s ‘hood also determines which queen residents of Las Tablas root for.

We’d foolishly failed to make a hotel reservation, but our Carnival Karma was in effect on Friday afternoon when we found a room at Hostal Villas de Zianit in the town of Guararé just a few miles from Las Tablas. Our hosts provided much more than a bed, a shower, and A/C, however.

Part of an accomplished local family, Edgar and Nikki were full of information about Carnival activities and traditions. They also guided us through our first brush with Carnival when they invited us to La Villa de Los Santos to see the crowning ceremonies for the queens in their hometown.

The square in Los Santos was mellow and uncrowded as families mingled around men grilling hot dogs and stands selling beer as everyone waited for the start of the formalities which was marked by the arrival of last year’s Calle Arriba queen on a float pulled by a tractor driven by a man who, weirdly, looked like he’d rather be having root canal.

The out-going queen did a few laps of the sleepy square wearing a dress that was mostly cut-away tailed by a second tractor pulling a full horn section and rousing drums. Then a second float arrived bearing last year’s Calle Abajo queen on her own float followed by her own band.

We followed the Calle Arriba float down a residential street to an elaborate stage depicting someone’s addled interpretation of an ancient Babylonian scene with a bit of Thai temple sprinkled in. Huddled in the center of the stage was a figure wearing a huge head-dress. As the music started the figure began dancing and took off the headdress to reveal the shaved head of a transvestite in full drag. The crowd was mesmerized as the drag queen danced and lip-synched.

A drag queen kicks off the crowning ceremony.

“There would be no Carnival without the gays”

We’ve been pleasantly surprised by the general level of acceptance for the LGBT communities throughout Mexico and Central America but the full-on performance we were watching on the stage in this tiny town in Panama would have impressed anyone in Manhattan’s west village.

Perhaps sensing our amazement, Nikki told us that there would be no Carnival without “the gays” as everyone seems to call homosexuals. “They make the dresses, do the makeup, design the floats, everything,” she said then turned her attention back to the stage in time to see the drag queen do a backflip in gold sequined hot pants.

Meanwhile, the outgoing Calle Arriba Carnival queen and her entourage had gotten off the float and were awaiting their turn to take the stage. 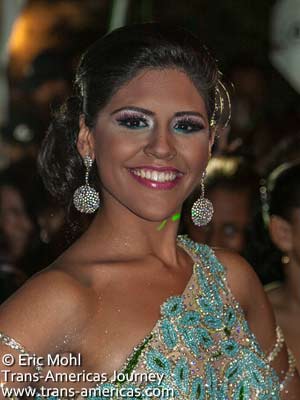 The new Calle Arriba queen, Elaine Malene Cortes Atencio, was stunning and she was duly crowned. There were no tears, just copious amounts of wiggling and waving (their elbows seemed to be connected to their hips). Despite their sequins and sparkles, the stage full of Carnival queens didn’t even come close to the stage presence of their opening act. 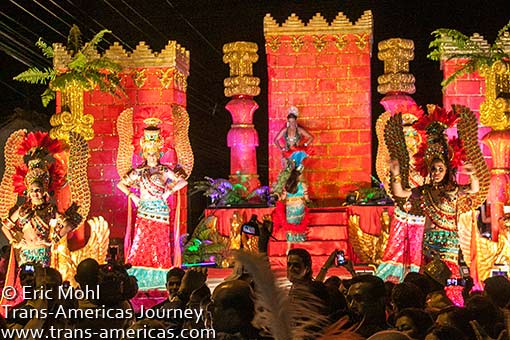 As the new Calle Arriba queen was being crowned Nikki pulled us away to the other end of town to see the Calle Abajo crowning. To make our completely mellow and educational Carnival debut even more enjoyable the Calle Abajo queen was Nikki’s cousin, Joanne Vásquez. 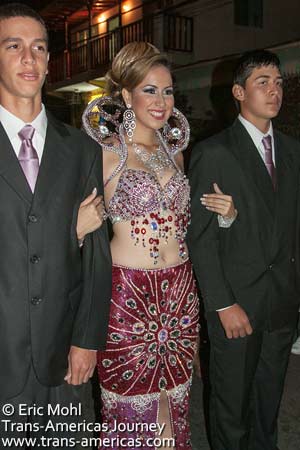 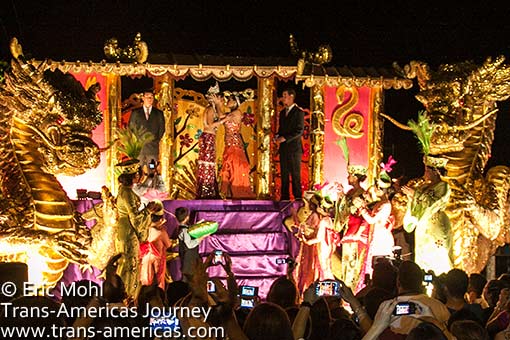 With the Los Santos queen crowning over we were ready for the main event in Las Tablas. We arrived around midnight, found a safe parking spot on the street (much to our surprise), and followed the crowds and the noise and the Klieg lights to an enormous outdoor club set up a few blocks from the town square.

Las Tablas was buzzing as families, couples, and what seemed to be every gay man within a 400-mile radius jostled to pay US$5 to enter the club area where stages had been set up for the crownings.

We soon saw why Las Tablas is the place to be. The staging, costumes, lighting, choreography and overall production values during the crownings were Vegas-worthy – part Cirque de Soleil, part RuPaul, part “Here Comes Honey Boo Boo.” Like all Carnival events, the crownings were capped off with a massive fireworks display.  And this was just the beginning! 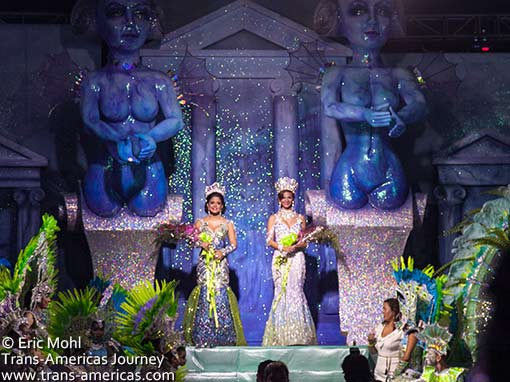 Maruquel Madelaine Gonzalez Valesquez (on the right) moments after being crowned the Calle Arriba Carnival queen in Las Tablas, Panama during a performance and ceremony that was spectacular enough for Vegas.

The cost of being Carnival queen

The outgoing Calle Arriba tuna (the name for the team of supporters behind each queen) spent US$382,000 to support and present their queen and we were told that the price tag for this year’s Las Tablas queens could top US$500,000 each to cover dresses, floats, hair and makeup artists, production companies, fireworks displays, bands, etc.

This explains why the main deciding criteria when it comes time to choose your queen isn’t beauty or brains. It’s “can she pay?” This year’s Calle Arriba queen, for example, is the daughter of an enormously wealthy local supermarket magnate and she actually tore up $20 bills during Carnival. It was a low point.