We arrived in sultry, steamy Cartagena, Colombia at the end of our sailboat adventure through the San Blas Islands from Panama. After four days of travel on a boat, we were ready for solid ground and a solid meal. As the country’s most touristed city, Cartagena is home to some of the best chefs and restaurants in Colombia (and a historic center which was designated a UNESCO World Heritage Site since 1984). Use our newly updated city travel guide (now with 12 great restaurants in Cartagena!) to see where to eat in Cartagena. 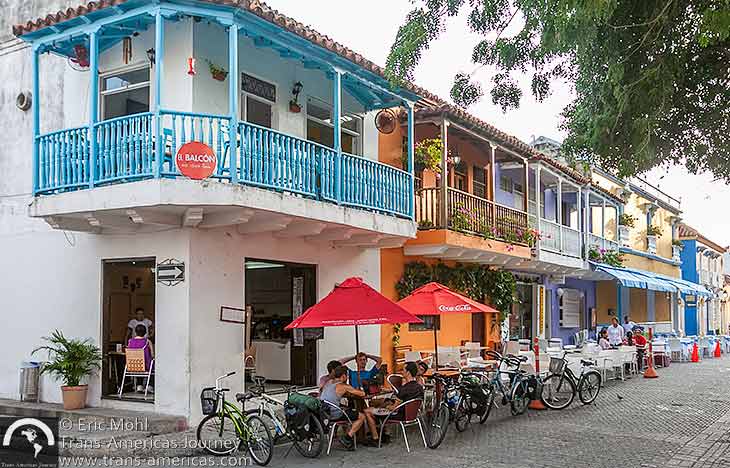 Cartagena, Colombia is bursting with restaurants and cafes like this.

Where to eat in Cartagena, Colombia

Di Silvio Trattoria, in the Getsemani neighborhood, is well known for its pizzas, though a full Italian menu is also offered. Over the years the restaurant has sprawled to include three adjoining locations. The roofless, crumbling, peeling façade of a gutted historic building serves as an outdoor dining room and it’s one of the most atmospheric al fresco dining locations in Cartagena. And the pizza is pretty good too. 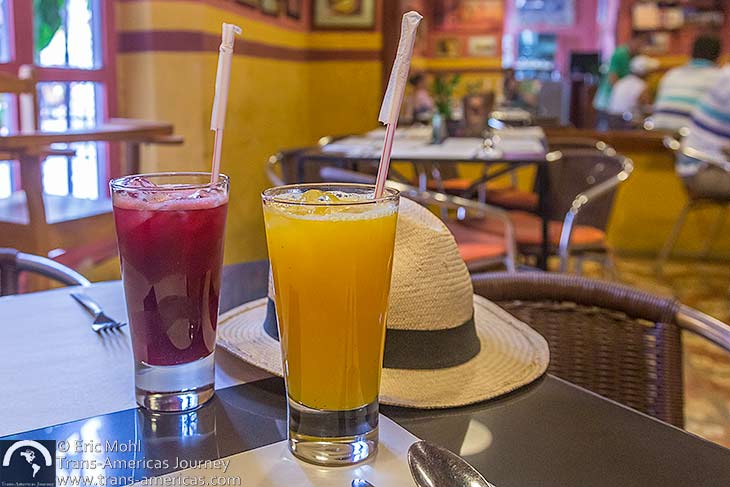 Cut through the Caribbean heat in Cartagena with fresh juices and other tropical treats at La Cocina de Pepina.

La Cocina de Pepina is famous in Cartagena as the place to find creative interpretations of Caribbean dishes. Grab one of the six tables and order up vibrant sweet and sour corozo juice made from seasonal palm fruits, fish stew rich with coconut milk, refreshing ezcapacio (chunks of fresh tuna pickled with carrots and peppers), and more all served in a brightly painted space down an unassuming side street. 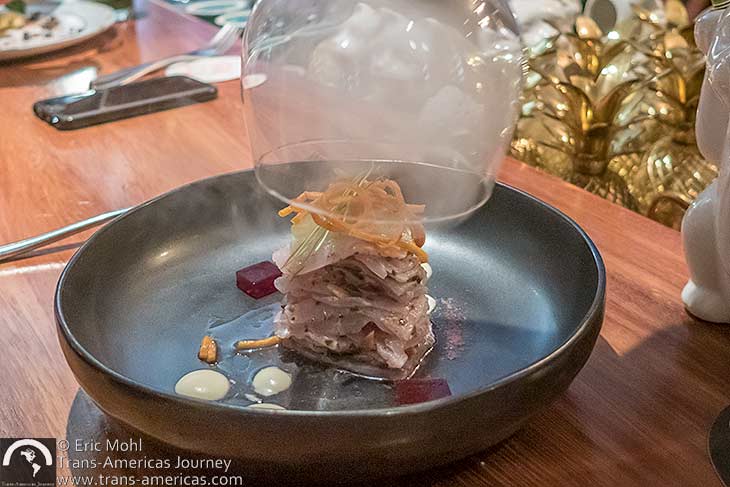 Chefs Carmen Angel and Rob Pevitts have been building their Colombian culinary empire slowly but surely. They now have beloved restaurants in Medellin including Don Diablo Colombian Bistro, The Little Bar, Moshi, and Carmen. But the flagships for both Carmen and Moshi (see below) are in Cartagena. Carmen Cartagena has recently moved into new roomier digs in the historic center of the city where the restaurant continues to turn out winners. The beef carpaccio is delectable. A plate of risotto with posta (a beloved Caribbean slow-cooked beef dish) is like a delicously rich ragu mixed into a tender risotto with refreshing peas and pea shoots. 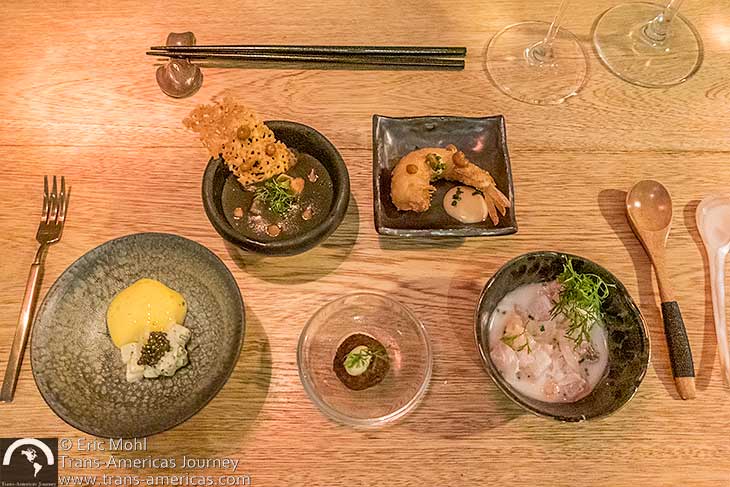 Just part of the omakase meal at Moshi.

Sharing space with Carmen Cartagena is Moshi where, after much research and investigation, Rob and Carmen are offering surprises like sushi made with plantain vinegar (made in house) and panela instead of rice wine and sugar and ramen made with noodles made from yuca flour and tucupi (an intense sauce from the Amazon) instead of hoisin sauce. Don’t miss the omakase experience (think of it as a Japanese tasting menu) which includes stunners like marinated sea bass collars with brown butter ponzu and spiced radish and rock shrimp in cocktail sauce with Caribbean crème fraiche, lime-pickled shallots, and cilantro served cold in a seaweed sheet. 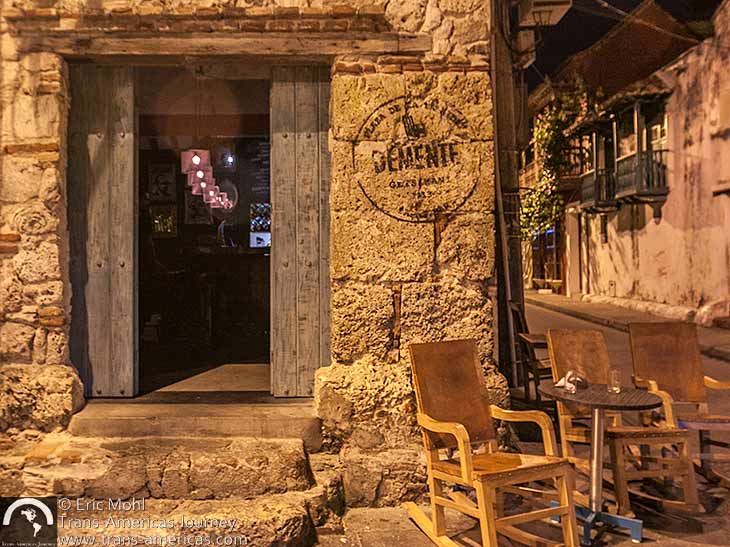 At Demente you can pull up a rocking chair, order some food and get a cocktail served with handmade ice cubes. Did we mention the Cuban cigars for sale?

Opened in 2013 in the Getsemani neighborhood, Demente is still one of the best places in Cartagena. Originally serving tapas only, a new menu now includes tapas and larger plates including an octopus salad, fried fish and pork chops plus many of the most popular tapas offerings plus a pizza and beer joint in the back. Don’t miss the rich and nuanced ox-tail hamburger and plates of addictive fried and salted sweet green peppers accompanied by cocktails, aged rum, and a small but well-sourced wine list. Real Cuban cigars are available too and you can relax in a stylish rocking chair and watch the smoke waft gently up. 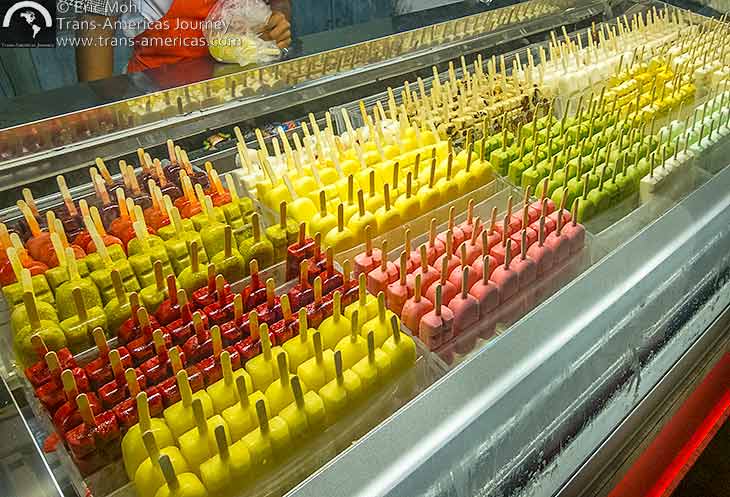 There are no wrong choices at La Paletteria.

Though the historic center of Cartagena is jammed with ice cream and paletta (Spanish for popsicle) shops, La Paletteria stands out thanks to hand-craftsmanship with the freshest all-natural ingredients from fruits to nuts to chocolate. Don’t miss out on having your paletta dipped in chocolate before you dig in. 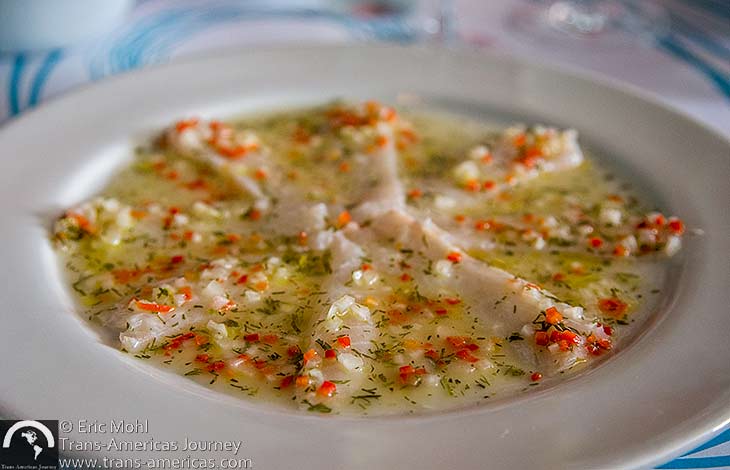 Ceviche is great, but the tiradito at La Perla was our favorite way to eat raw fish in Cartagena.

Ceviche and other forms of raw fish are a staple of many menus in Cartagena. We had the best tiraditos (thin strips of raw fish, like a Latin take on sashimi) at La Perla. 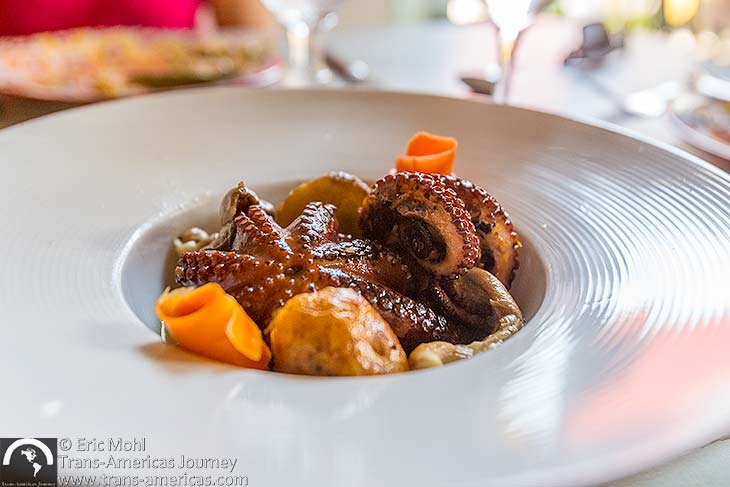 Another great place to get fresh takes on Caribbean seafood is El Boliche Cebicheria, but the name is a bit misleading. This is not just another typical ceviche shop. Pulpo with creamy and smoky eggplant and ceviche topped with popcorn take things to a new level. The space is tiny and the word is out, so make a reservation. 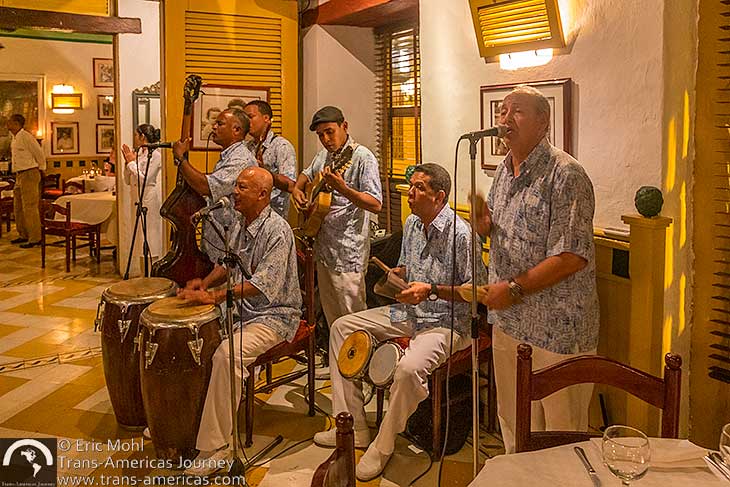 It is widely said that Gregorio Herrera is the best maître d’ in Cartagena and he is securely at the helm of La Vitrola. Opened in 1994, La Vitrola has cultivated a gravitas beyond its ten years with an extensive menu (jerk chicken, rib eye, ravioli, ample seafood options and more) and skilled wait staff. There’s a live Cuban band most nights set up in front of La Vitrola’s inviting long bar. Reservations are a must and there’s a city casual dress code. It’s not the best food in town, but the atmosphere can’t be beat. 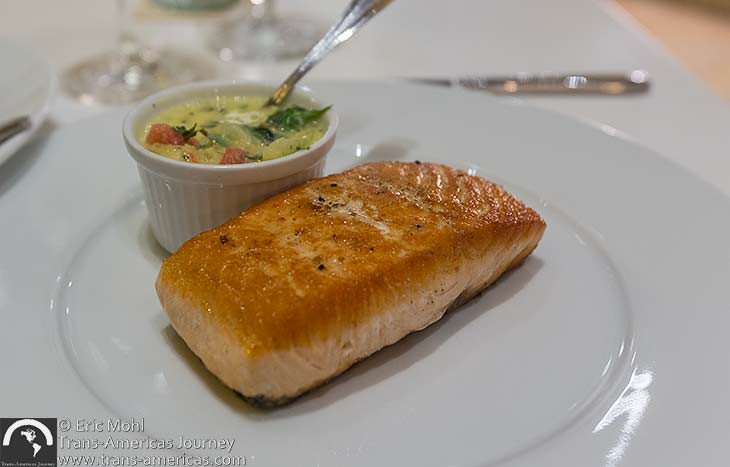 Salmon gets the Harry Sasson treatment at his namesake restaurant in the Charleston Santa Teresa Hotel in Cartagena.

At the end of 2014, Colombian celebrity chef Harry Sasson debuted his sixth restaurant and the first one outside of Bogotá with the opening of the 200-seat Harry’s Restaurant & Bar inside the landmark Charleston Santa Teresa Hotel. The menu is extremely wide-ranging and the bar has a fabulous view. 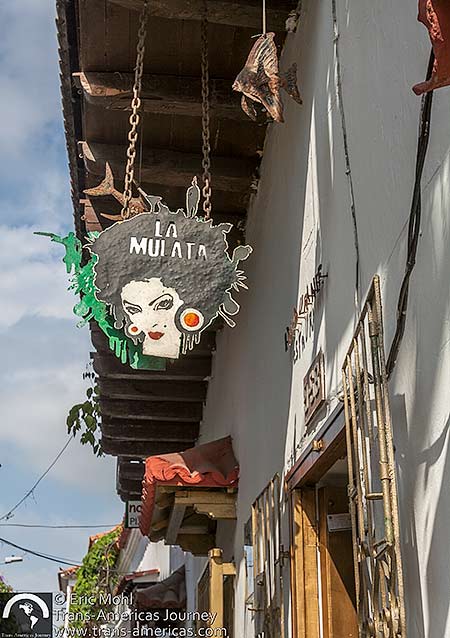 The city’s best value lunch can be had at La Mulata.

Even after a recent price hike, La Mulata is serving up the best value lunch (and, now, dinner) in Cartagena in a stylish setting to boot. Local workers and tourists looking for an affordable meal fill the place for seafood, pork, beef and chicken dishes served up with Caribbean style and sass. All meals are prefaced with a soup (for around 15,000 COP or about US$6) and should be washed down with one of La Mulata’s three varieties of ice cold, homemade lemonade. Ask for their frequent diner card. You will be back and you might as well eat your way toward a free lunch.

Even cheaper (and less inspired) is Totopo where 10,000 COP (about US$4) gets you a passable set meal. In Getsemani, Corocoran serves up set meals for 6,500 COP (about US $2.50) and draws a massive crowd. Be prepared to wait for a table, though the harried waitresses seem to take pity on foreigners. 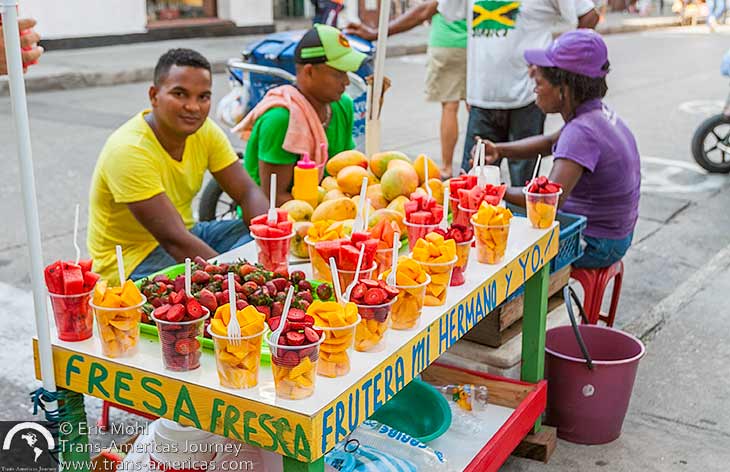 When in doubt, eat on the street in Cartagena.

Continue your Cartagena trip planning with our complete city travel guide to Cartagena, Colombia which covers, hotels, bars, activities, and the general beauty of this city. 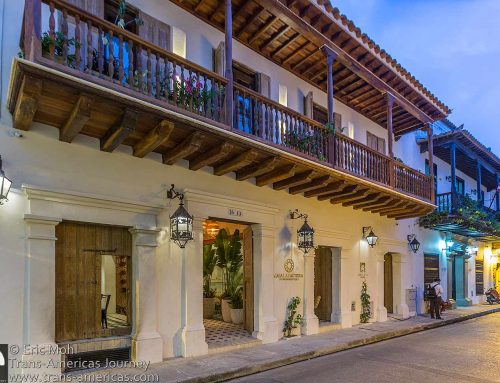