The small city of Cartago, less than 30 miles (48 kilometers) from the capital city of San José, was established by the Spanish in 1563. For the next 200 years or so it served as the very first capital of Costa Rica until Irazú Volcano erupted and destroyed most of the city. What remained was ultimately wiped out by two massive earthquakes. Cartago was eventually rebuilt though, sadly, not in its original Colonial style. It’s now a base for travel to nearby Irazú Volcano National Park, Turrialba Volcano National Park, and the Guayabo archaeological site. 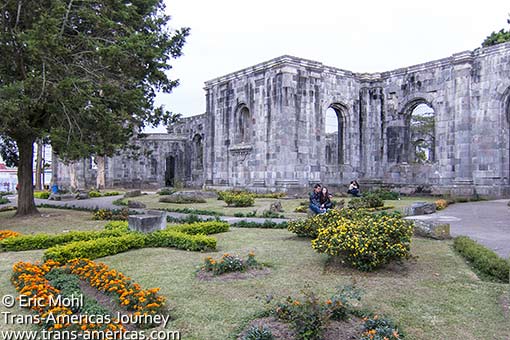 Earthquakes and volcanic eruptions have demolished the small city of Cartago, Costa Rica more than once. All that remains of the St. Bartholomew Church are these atmospheric walls.

Cartago’s Our Lady of the Angels Basilica (Basílica de Nuestra Señora de los Ángeles in Spanish) retains some Colonial architecture mixed with 19th-century Byzantine style and various other types of architecture that were employed during numerous reconstructions of the church which has been repeatedly damaged by eruptions and earthquakes. The result is a kind of religious M.C. Escher effect. 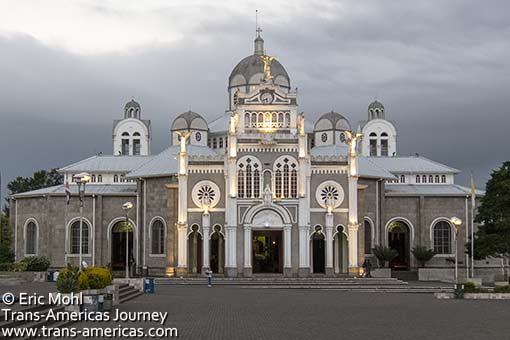 Our Lady of the Angels Basilica in Cartago, Costa Rica houses La Negrita, a religious icon said to be capable of performing healing miracles.

The miracle of the black Madonna

The basilica was built because of La Negrita (the Black Madonna), a small, dark stone figure said to have been discovered by an indigenous girl in 1635. When she tried to take the figure with her it repeatedly found its way back to where it was found so they built the basilica on the spot. You can see La Negrita on a gold platform near the main altar of the basilica. 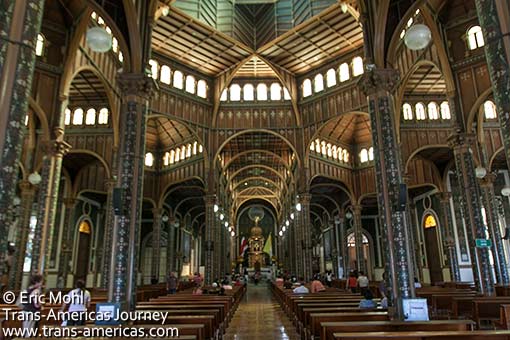 The interior of Our Lady of the Angels Basilica in Cartago, Costa Rica is an architectural mish-mash that looks a bit like an M.C. Escher drawing.

In 1824 La Negrita was declared Costa Rica’s patron Virgin and people still travel to the basilica seeking her healing powers. A museum in the crypt below the church is filled with votives (or milagros in Spanish) which are tiny charm-like representations of ailments (hearts, legs, etc) left by those seeking La Negrita’s help. 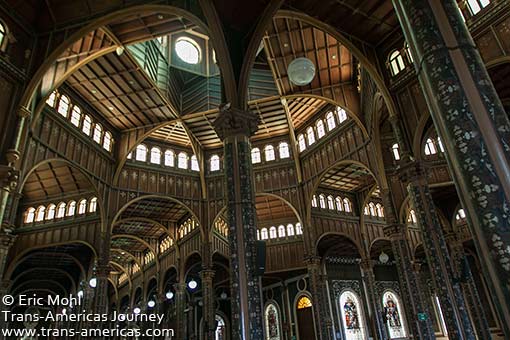 Every August pilgrims flock to Our Lady of the Angels Basilica, the most important religious site in Costa Rica.

Some consider the basilica to be the most important religious site in Costa Rica and thousands of the faithful make a pilgrimage here every August.

In Cartago, we stayed at Casa Mora, a comfortable, spotless, and homey B&B in what used to be the Mora family’s home. A prime example of city rebuilding done in the ’70s, Casa Mora’s wacky entryway fountain, split level design, beaded curtains, and orange/brown/yellow color scheme had us thinking Brady Bunch, not Mora family.

A volcano comes (back) to life 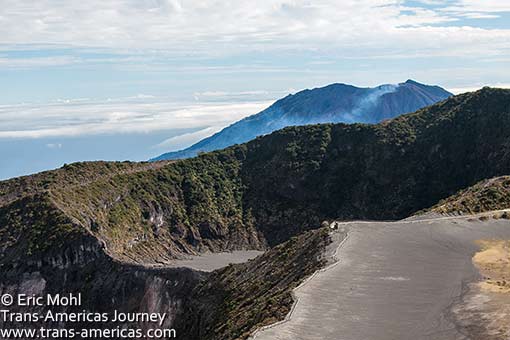 Smoke puffs out of the recently-revived Turriabla Volcano in the distance, as seen from one of the craters of Costa Rica’s Irazú Volcano which is also active.

In January of 2010, the centerpiece of Turrialba Volcano National Park, showed signs of life after a 140 year nap. This 10,958 foot (3,340 meter) volcano has been rumbling, spewing, and erupting off and on ever since creating two new vents and prompting some evacuations.

We arrived at the parking lot and the start of the short trail around Irazú’s craters at 9 am and were rewarded for our efforts with clear skies and fantastic views of Turrialba in the near distance. Plumes of smoke were clearly wafting into the air out of Turrialba’s crater.

Irazú is also an active volcano and some experts theorize that the renewed activity of Turrialba could spark more action at Irazú too. Not for nothing, we were asked to back into a parking space to ensure a speedy get away should Irazú try any funny business.

On a very, very clear day you can see both the Pacific and the Atlantic Oceans from Irazú Volcano National Park in Costa Rica.

The mysterious mounds of Guayabo

One of the best places to take in Turrialba Volcano is from Guayabo de Turrialba National Monument (US$10 per person) on the volcano’s southern slope. Guayaba is the only pre-Colombian site in Costa Rica and dates back 2,500 years. It’s not a Mayan site, so don’t expect soaring temples. 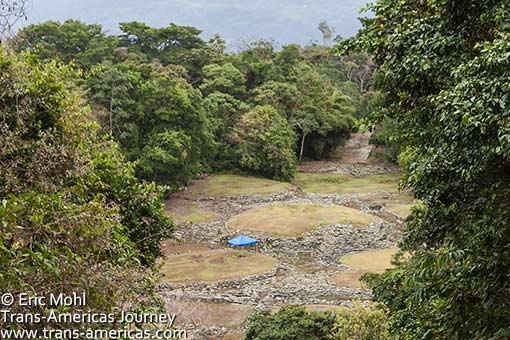 Mysterious mounds and circles are a distinguishing feature of Guayaba de Turrialba National Monument, the only pre-Colombian archaeological site in Costa Rica.

What’s been excavated at Guayaba includes intricately carved stones, an even more intricate water management system and a series of odd mounds which can be easily toured in 45 minutes via a gentle trail. 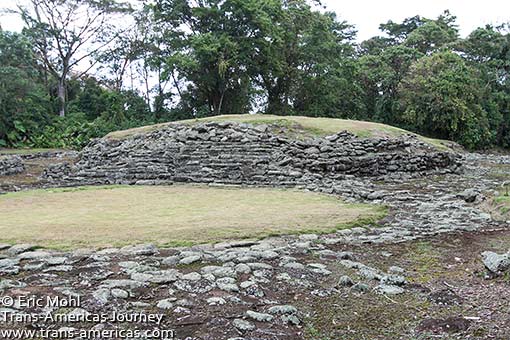 Guayaba de Turrialba National Monument is one of the few archaeological sites in Costa Rica and the only one that dates back to pre-Colombian times. 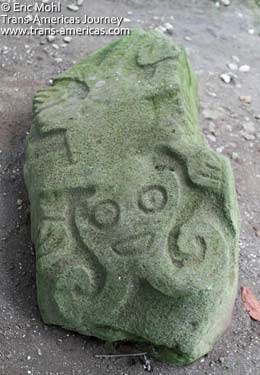 Carved rocks, an impressive water management system and odd mounds in the ground are hallmarks of the Guayaba de Turrialba National Monument in Costa Rica.