UPDATE: In February of 2019, a sinkhole formed upstream from the San Rafael Waterfall. This diverted water and split the falls into three small streams. Some experts believe the sinkhole formed naturally while others believe the construction of a nearby hydroelectric dam may have played a role.

At 430 feet (131 meters), Cascada San Rafael (San Rafael Waterfall) is the tallest waterfall in Ecuador. It’s also the biggest waterfall by volume in the country and 24th biggest by volume in the world with an estimated water flow of 14,125 cubic feet (400 cubic meters) per second according to this site for waterfall geeks. But that may be changing. Environmentalists fear that a dam in the area will affect the flow of the falls. 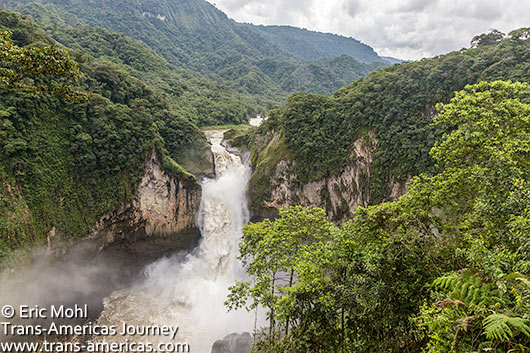 Cascada San Rafael is the biggest waterfall in Ecuador. For now.

A dam threatens the biggest waterfall in Ecuador

Though Ecuador is a major oil producer, the country, like many of its Latin neighbors, is eager to begin harnessing its rivers to produce hydroelectric power. That sounds great, but there’s a twist.

In recent years China has established an enormous trade presence in Latin America where Chinese companies are buying up natural resources. In some major Latin markets China is now a bigger trading partner than the US or Europe. In Ecuador, China has signed contracts to buy much of the country’s crude oil which comes from controversial drilling operations in the Amazon–in part as payment for public works projects that China is completing inside Ecuador, including a collection of dams to produce hydro power.

The Coca-Codo Sinclair Hydroelectric Project on the Coca River is being built by a Chinese company called Sinohydro. So many workers were brought in from China to work on the  massive project that entire towns in the region have become sinofied. Road signs and safety signs now appear in Spanish and Chinese. 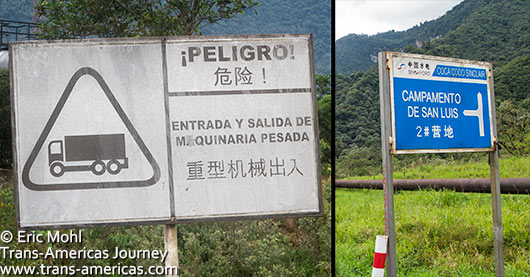 An influx of Chinese workers building dams across Ecuador have turned this town bilingual.

Part of the project, which includes multiple dams, can be seen from the road and it’s this installation, about 11 miles (19 km) from the San Rafael Waterfall that may impact the flow. Some environmental groups, like International Rivers, fear San Rafael could be nearly dried up by the hydro project and point to Ecuador’s second highest falls, Agoyan Waterfall, which has already been severely reduced by a different hydro project. 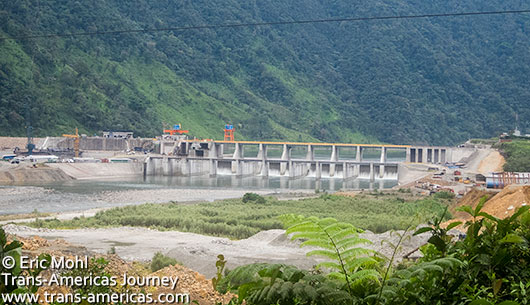 Environmentalists fear that this portion of the massive Coca-Codo Sinclair Hydroelectric Project dam and hydro project in Ecuador could mean the end of the biggest waterfall in the country.

The first time we visited San Rafael Waterfall in February 2014 the trail was closed because of a recent landslide. The second time we visited the falls, in late December 2014, it looked like the image below left. 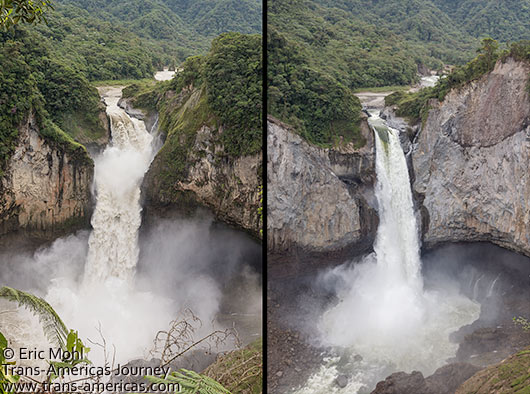 The third time we visited the waterfall, in late September 2015, landslides around the falls had changed the flow and there seemed to be less water in general coming over the edge. The top of the falls is clearly a few feet higher on the left. This could be seasonal or from the dam, who knows. 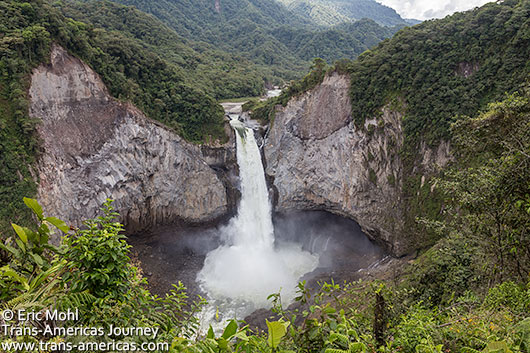 San Rafael Waterfall in September 2015. A new dam and hydro project, expected to be completed and online in 2016, could alter things dramatically.

During our most recent visit we were able to put our DJI Phantom 3 Professional quadcopter up in the air to get some aerial drone footage of San Rafael Waterfall. Check it out, below.

The Coca-Codo Sinclair Hydroelectric Project is expected to be completed in 2016 and when it’s in full operation it will undoubtedly affect the river. The question is: how much?

The San Rafael Waterfall is within the massive Cayambe-Coca National Park and the trailhead is just off the highway that runs between Quito and Tena, Coca or Lago Agrio (which are all jumping off points for Amazon and Cuyabeno trips). Like all national parks and reserves in Ecuador (except Galapagos Islands National Park), entry is free. There are clean bathrooms and an enormous stuffed fake Andean Bear (aka, spectacled bear) at the small ranger station. You’ll need to present your passport and get checked in.

There’s a well-made, mostly shaded trail (more like a small dirt road) that travels down to an elevated platform with excellent views of the entire waterfall. Allow about 30 minutes each way at a reasonable pace.

Check out the Hosteria El Reventador as a place to spend the night. It’s just a stone’s throw from the trailhead.