Each June, one of the wildest festivals in Peru takes place as residents of local communities around the town of Lucanas in the Ayacucho province of Peru put on the Chaccu Festival (Chaccu Nacional de Vicuñas in Spanish). The Chaccu Festival (sometimes spelled Chaku) is a celebration of Incan and pre-Incan culture and also a celebration of the area’s beloved (and valuable) wild vicuña. 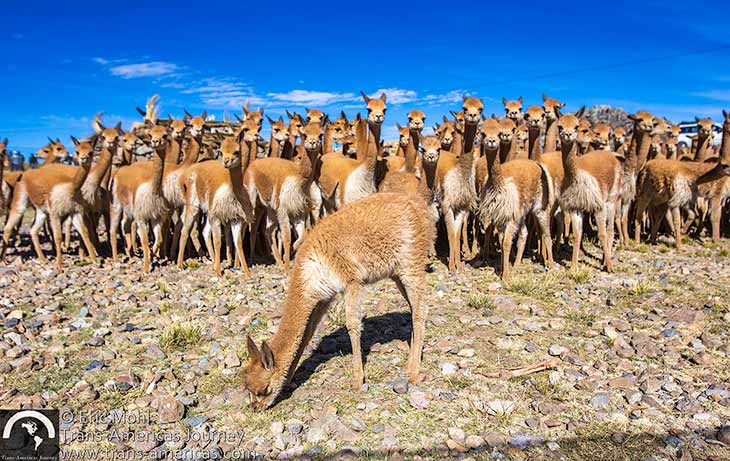 The annual Chaccu Festival in Peru celebrates wild vicuñas like these.

Vicuñas are the wild cousins of alpacas. They are lanky and graceful and we often describe them as the supermodels of the camelid family (which also includes llamas and guanacos). But they’re not just pretty faces.

So cute and so valuable.

A vicuña’s coat is made up of fibers that are incredibly thin, incredibly soft, and incredibly warm. Just 2.2 points (1 kilo) of vicuña fiber goes for about US$50 in its raw state and 10 times that much after it’s been cleaned and is ready to use. You’ve got to shear about five vicuñas to get a kilo of fiber since only a saddle-shaped area on the animal’s back and sides are sheared, leaving the long white fibers on their chests intact. 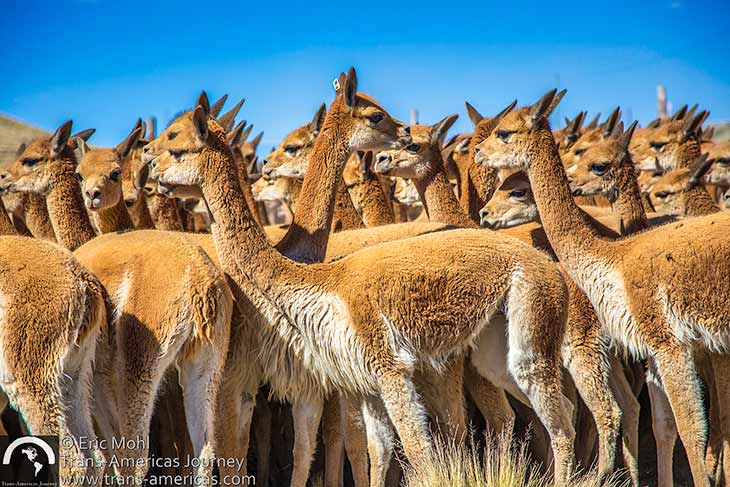 You can see why we call vicuñas the supermodels of the camelid family.

Adding to the value of vicuña fiber is the fact that these animals are extremely difficult to domesticate (so there are no vicuña farms) and the species was once considered endangered.

Vicuñas in the temporary holding pen set up during the Chaccu Festival.

It’s believed that only royalty was allowed to wear garments made from vicuña fiber during the Incan Empire and vicuña fiber remains a highly-valued commodity. Today, the only way to harvest vicuña fiber is during sanctioned round-ups and shearings of wild vicuña. 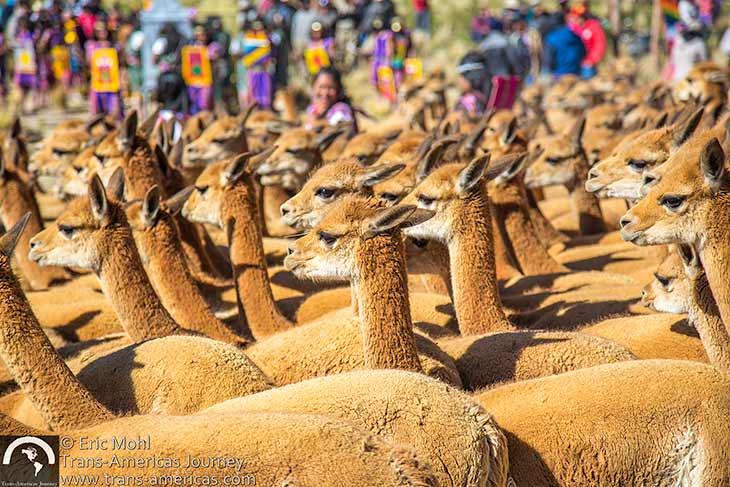 The penned vicuñas slowly settled into their temporary new environment.

One such sanctioned round-up and shearing takes place during the Chaccu Festival. Fiber gathered during this festival is sold with proceeds benefiting members of many local communities. 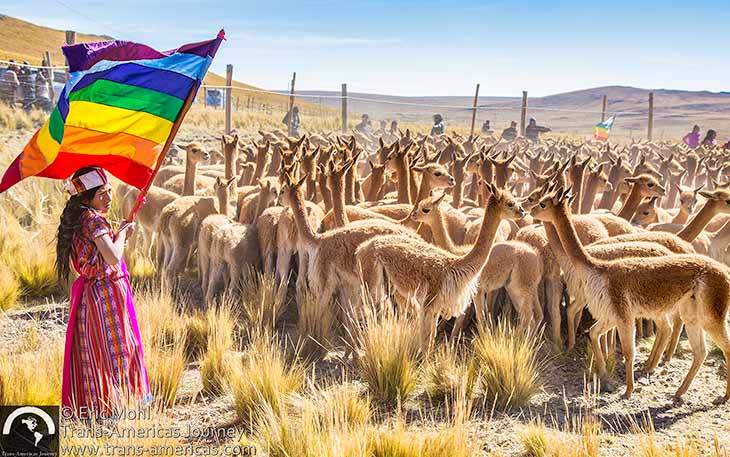 A local girl with an indigenous flag at the Chaccu Festival.

Inside the Chaccu Festival vicuña round-up in Peru

The vicuña round-up and shearing that takes place during the Chaccu Festival is a pre-Incan ritual (the word chaccu means “capturing vicuñas” in the Quechua language). It’s been conducted in its current form since 1993. The annual event is held each June very near the Pampa Galeras Barbara D’ Achille National Reserve (Reserva Nacional Pampa Galeras Barbara D’Achille in Spanish). Commonly referred to as the Pampa Galeras Reserve, it’s home to thousands of wild vicuñas, a few guanacoes, and a good number of Andean condors. 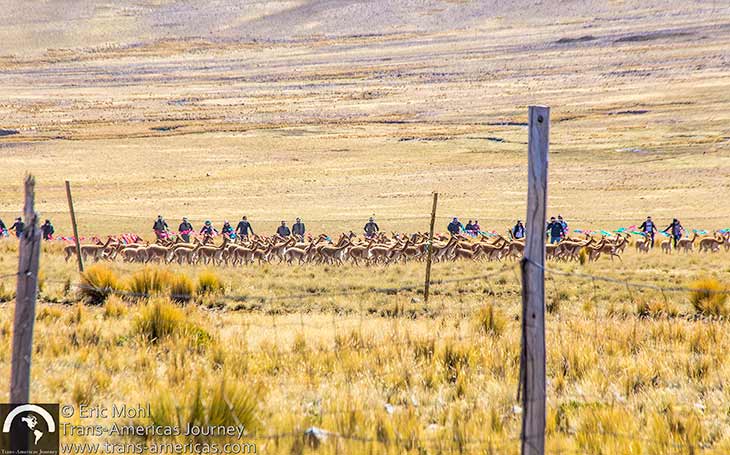 Hundreds of people held onto a very long rope and moved slowly behind the wild vicuñas to move them into a round pen.

The Chaccu Festival is a 3-day event. The herding is done on the second day of the festival and the shearing is done on the third day (the animals are released after they’re sheared). The festival attracts so many onlookers and involves so many wild animals that the paved highway through the area is closed at times for safety. 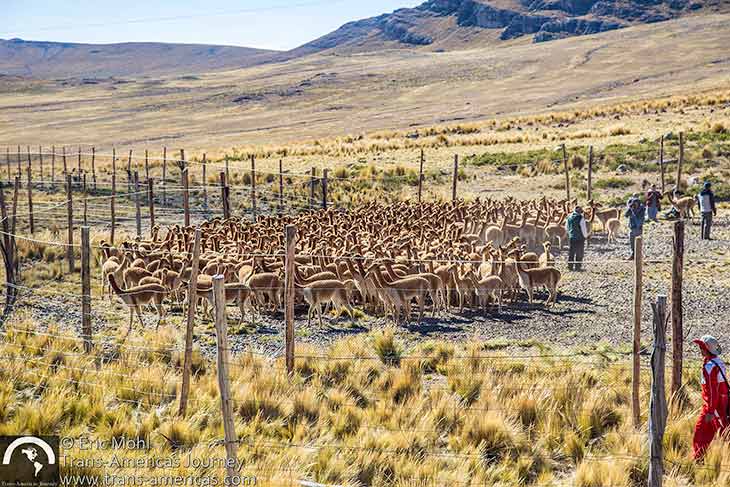 Vicuñas entering the round pen.

We spent the second day at the festival because we wanted to see the traditional round-up which involves about 100 men and women holding onto a rope that seemed to be 0.6 miles (1 km) long with colorful flags attached to it. They form a kind of human fence and walk slowly behind groups of vicuñas which are gently “herded” forward. 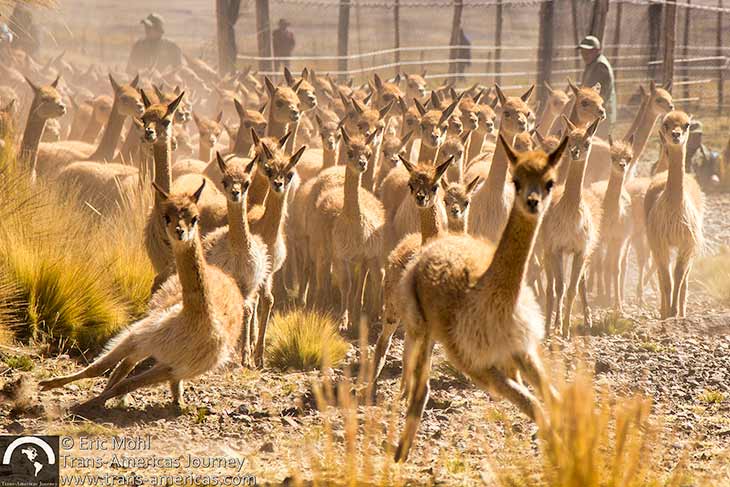 The vicuñas were skittish when they first entered the pen, but they settled down over time.

As the men and women walked behind the animals, they slowly tightened the rope. After a few hours of this gentle, patient, slow-motion round-up, a few hundred vicuñas were eventually moved into a temporary round pen. 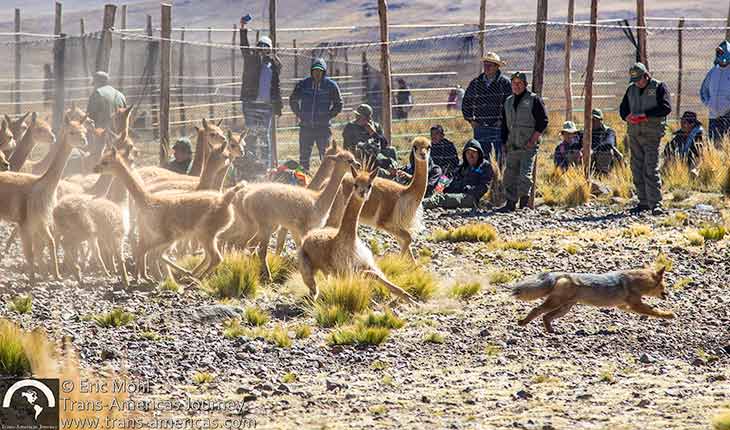 Along with the vicuñas, the round-up also included a couple of foxes that caused mayhem before they got out of the pen.

There were a few moments of panic as the vicuñas realized they were trapped, but then the animals settled down and were mostly calm. They also rounded up some huge Andean geese and two foxes which caused a bit of mayhem in the pen until they figured out how to get out. 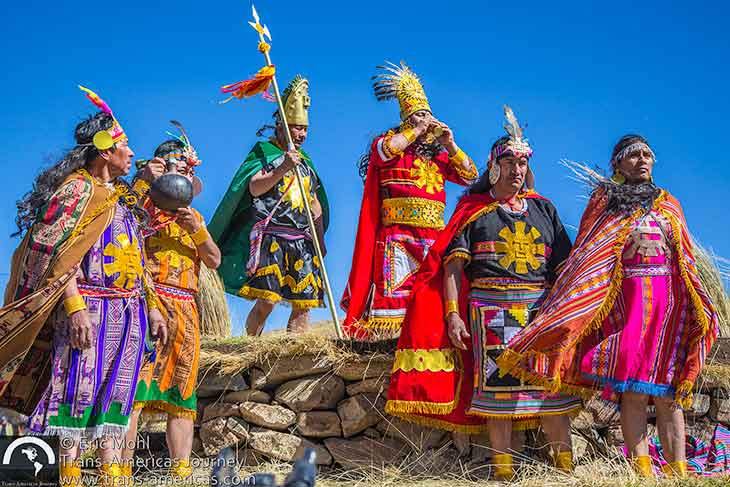 Once the vicuñas were all in the pen, locals, dressed up as Incans, entered the pen and lit incense. 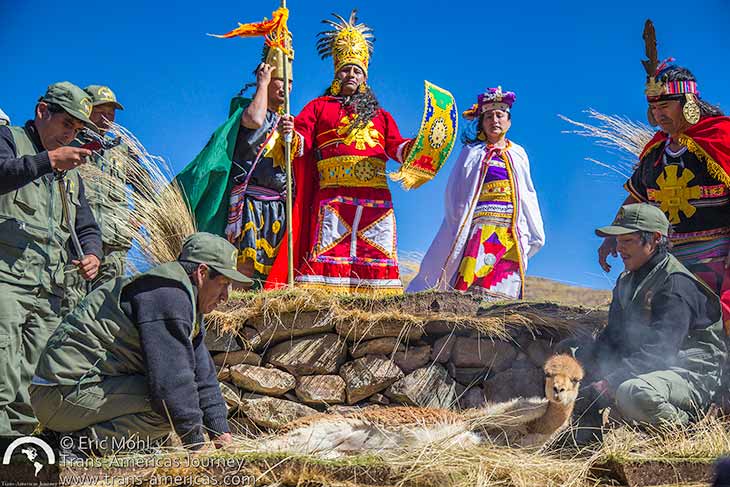 This hapless vicuña was crudely shorn by uniform-wearing park officials as part of rituals involved in the Chaccu Festival.

A few unlucky vicuñas were caught and paraded around on the 2-level platform that was set up inside the pen. One vicuña was crudely shorn with electric clippers yielding a wad of fiber about the size of a soccer ball. 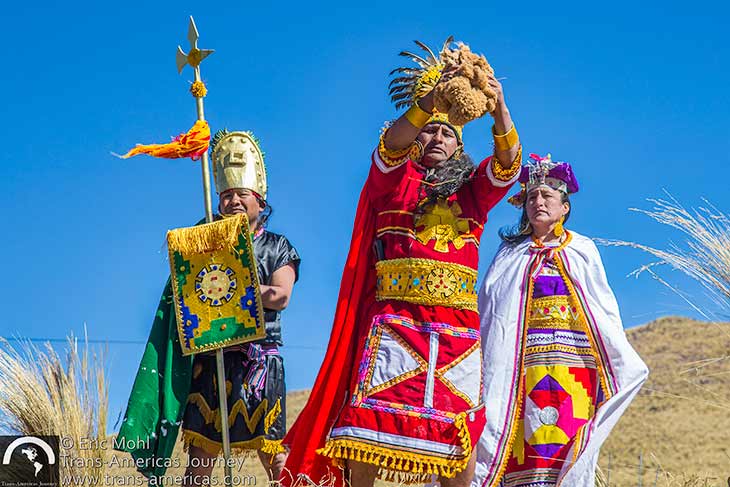 The shearing of one vicuña yields a wad of fiber about the size of a soccer ball.

As the formalities continued, a band played huayno music (flute and drums), costumed dancers performed, and local leaders talked in Spanish and Quechua. 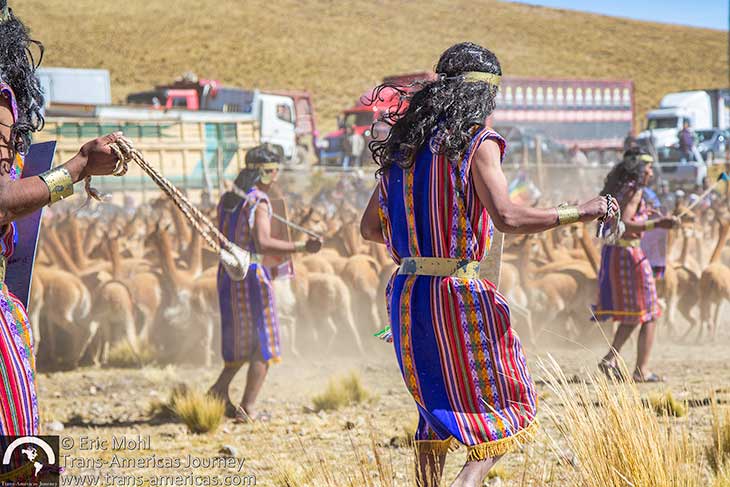 At this point, the penned vicuñas were pretty stressed by the noise, the activity, and the people which included school groups, locals, overdressed Peruvian tourists, and a handful of foreigners. 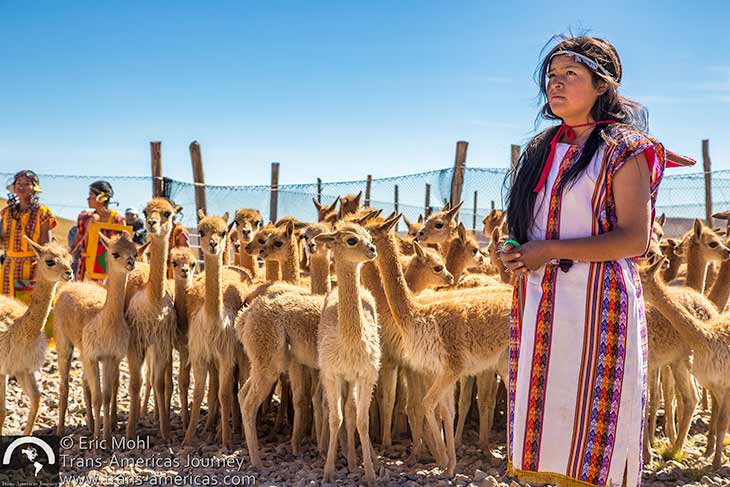 A costumed participant in the midst of the elegant vicuñas.

The day had the spirit of a party and a solemn ritual with both cultural and economic import. By 3 pm, the day’s events were breaking up, but not before one vicuña had its ear pricked and some participants tasted the blood. All of the animals were sheared the next day, then released back into the wild.

See highlights from the Chaccu Festival in our video, below.

The festival takes place just outside of the Pampa Galeras Reserve right along Highway 30A which is the main highway connecting Nazca and Cuzco. During the festival, we stayed in the town of Puquio about 1.5 hours from the festival site, where we had an extremely cold room in a small guesthouse. It would be possible to take in the festival from the city of Nazca which is at a much lower elevation and much warmer, but Nazca is at least a 3-hour (very winding) drive each way from where this festival is held. If you don’t have your own transportation (like we do), some tour companies offer trips to this festival. 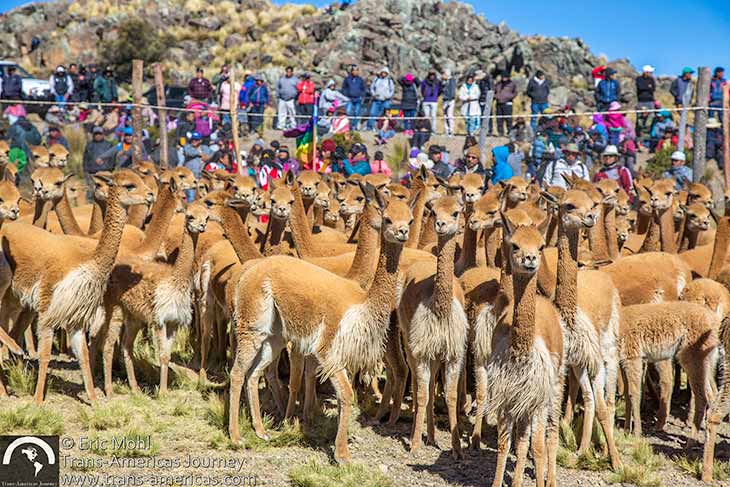 Many locals and a few tourists attend the annual Chaccu Festival.

This festival takes place at more than 13,500 feet (4,110 meters), so be prepared for strong sun, cold temperatures, and lots of wind. Be especially aware of the altitude if you are arriving from low altitude Nazca or the coast. Spending time at these altitudes without acclimatizing can be uncomfortable and even dangerous. There are few services here, so bring your own food and water.

The red pyramid sign (left) marks an entrance to the Pama Galeras National Reserve where groups of wild vicuña (right) can be seen.

And remember that it’s worth visiting and exploring the Pampa Galeras National Reserve while you’re in the area. This is the oldest reserve in Peru (it was founded in 1967) and it’s home to thousands of wild vicuña. Located about 4 miles (6.5 km) west of the Chaccu site along Highway 30A, the reserve headquarters has a small museum (where you can see an array of stuffed local fauna). When we were there, the reserve was also trying to re-establish a healthy population of guanacos. 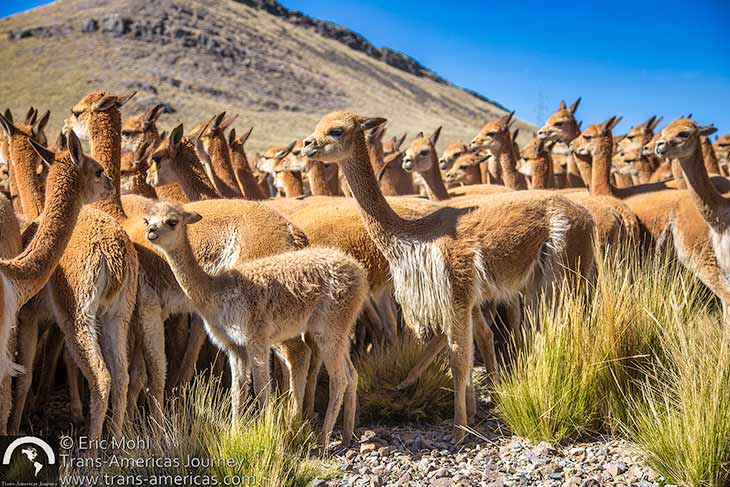 Once threatened, vicuñas are flourishing in the Pampa Galeras National Reserve.

Our museum guide said there are also more condors in the Pampa Galeras National Reserve than in the Colca Canyon and that more than 30 of the huge endangered birds roost on ledges in a rocky bluff just above where the Chaccu Festival takes place. About 1.5 miles (2.4 km) east of the Chaccu Festival site, a  dirt road turns off the highway (the turn is marked with the red pyramidical marker shown in the photo above). During a short drive along this road, we saw many wild vicuñas as we traveled into the reserve. The reserve is also home to a group of caves that contain human bones and a very old painting of a vincuña. Germans built a lot of infrastructure in the reserve, including dorm rooms and bathrooms that travelers can use. 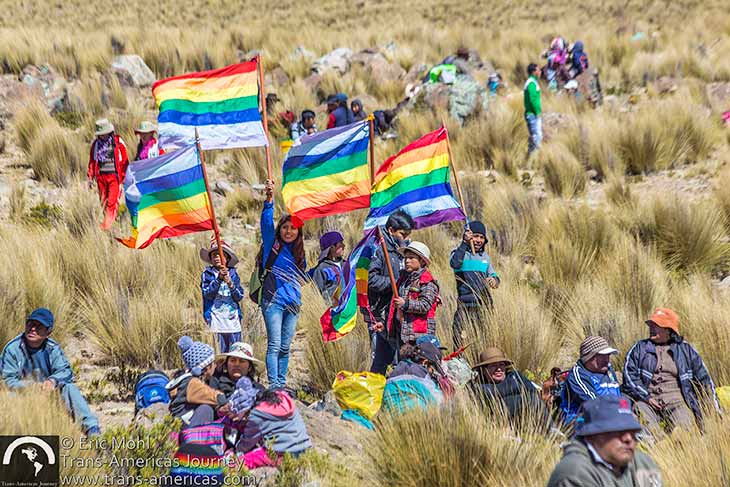 Locals watching the Chaccu Festival wave indigenous flags that are a symbol of cultural pride. 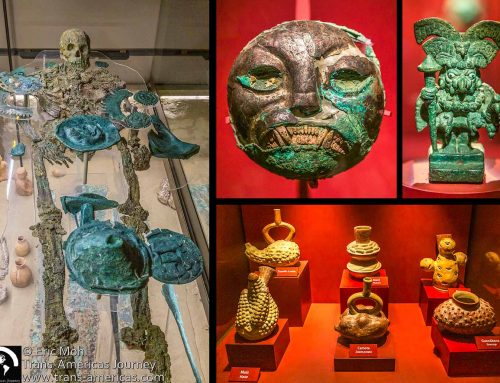