This massive archaeological site dates back hundreds of years and is considered by many to be the largest adobe city in the Americas. No wonder the Chan Chan archaeological site, which served as the capital of the Chimú people, is one of the most popular cultural travel destinations in Peru. 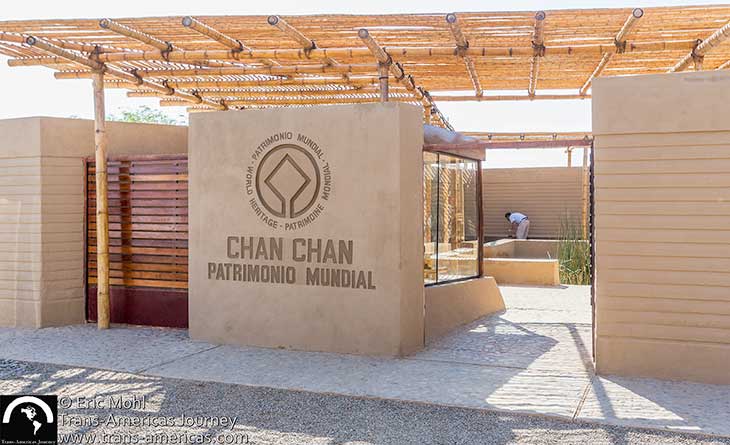 A sign at the entrance to the Chan Chan archaeological site in Peru proudly displays the site’s standing as a UNESCO World Heritage site.

The Chimú people completed their capital around 850 AD and it grew into what is now considered to be the largest adobe city in the Americas. At its peak in the 15th century, Chan Chan had miles of adobe walls up to 30 feet (10 meters) high and 10,000 mud and adobe structures covering 8 square miles (20 square km). 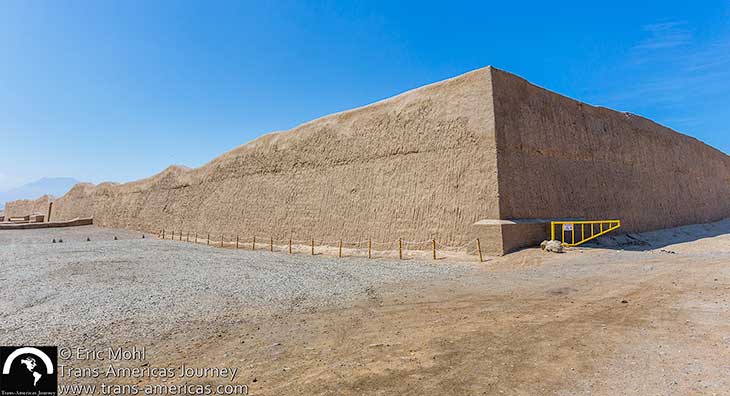 Giant walls surround the Nik An citadel, one of nine or ten citadels that were located within the Chan Chan Monumental Zone.

The Chan Chan capital included a monumental zone with nine or 10 walled citadels each containing royal palaces, temples, and plazas. There was also a sprawling area where up to 60,000 residents lived plus large agricultural areas. 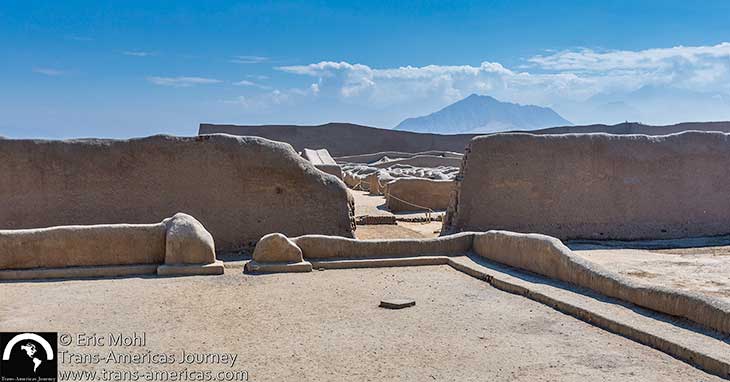 Time and the elements have caused significant damage to areas of the Chan Chan archaeological site.

Around 1470 the Inca dominated the Chimú culture. Spanish conquistadors ousted the Inca in the 1500s. At some point in all that turmoil, the Chimú capital city was abandoned. Over the years, the climate (including destructive El Niño weather patterns that batter the north of Peru) did a lot of damage to the mud-brick structures. 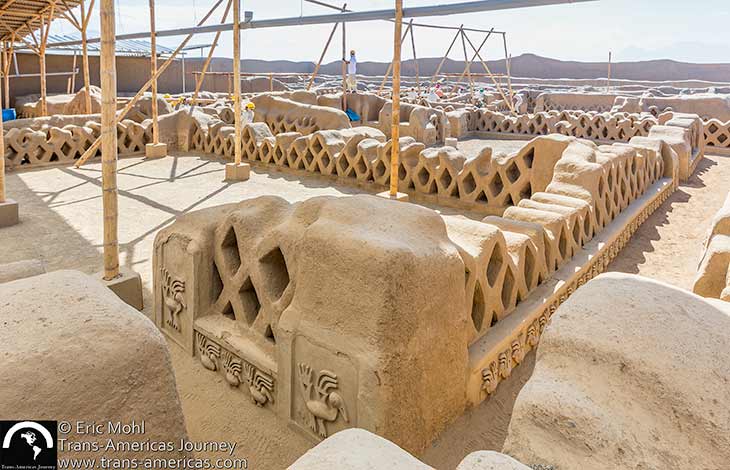 Protective roofs now cover many areas of the Chan Chan archaeological site to shield what’s left from the elements.

Chan Chan was named a UNESCO World Heritage site in 1986 and restoration and conservation work at the site is ongoing. For example, when we were there a project was underway to build a roof to protect vulnerable areas from the elements. These are necessary steps to preserve the site, but these protective structures do make it harder to photograph the grandeur of the place. 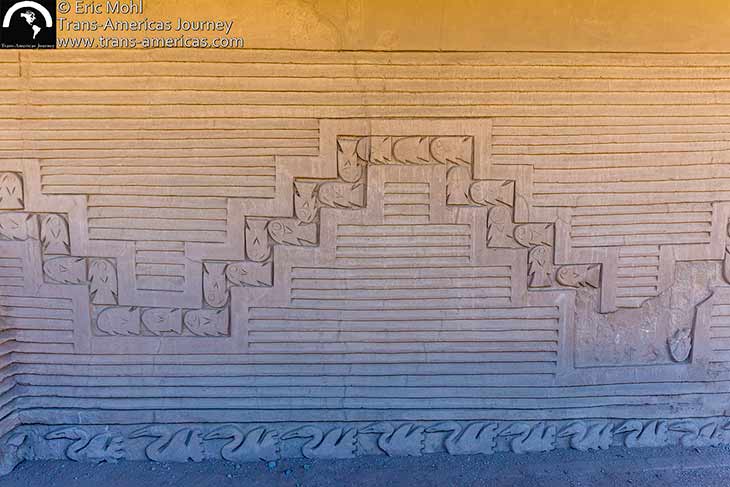 Bird and fish motifs decorate a wall at the Chan Chan archaeological site in northern Peru.

The Chan Chan archaeological site (10 soles or about US$2.50 including entry to the Huaca Arco Iris  and Huaca La Esmeralda sites Trujillo, multilingual guides are available for hire) is about 3 miles (5 km) outside the city of Trujillo in northern Peru on the highway that connects Trujillo and the beach town of Huanchaco. 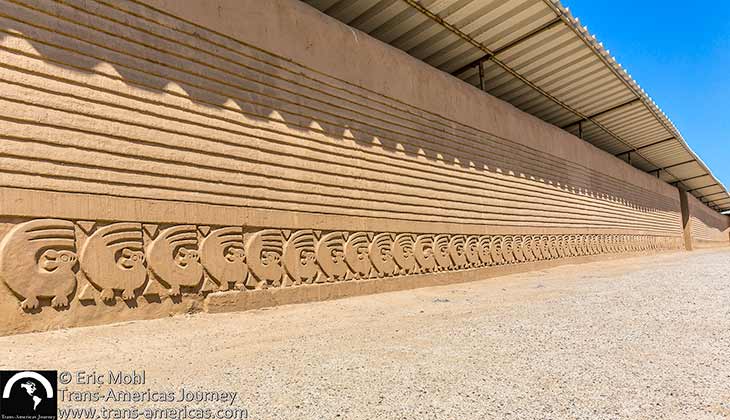 We were told that these creatures, which adorn walls within the Nik An citadel, are otters and we can’t think of another archaeological site we’ve visited where otters were depicted.

It occupies an arid location near the Pacific Ocean. In this environment, irrigation was essential and the Chimú developed a system that brought water from miles away in order to cultivate crops and sustain its large population and that system remains an ancient engineering wonder. 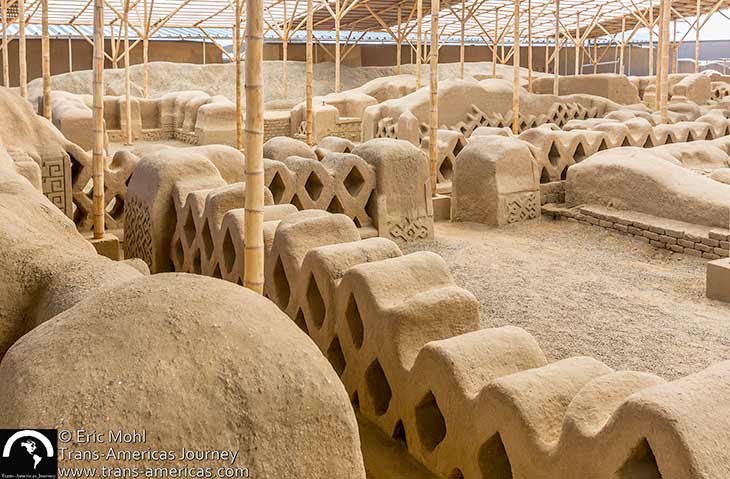 Decorative elements within the Nik An citadel at the Chan Chan archaeological site.

The Chimú were so renowned for their clever construction that some experts believe that the Inca brought Chimú artisans, craftsmen, and builders with them to Cuzco where they were made to work to construct parts of the Incan capital there. 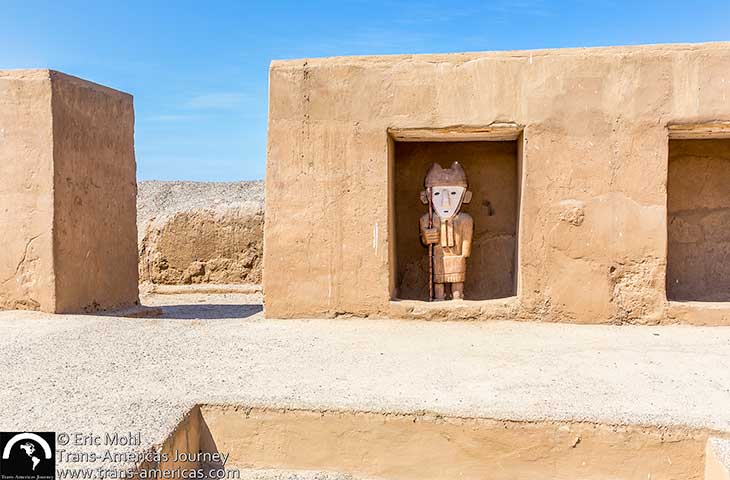 Most of the decorative elements we saw at Chan Chan came in the form of friezes. Then there was this guy.

Currently, the only area of Chan Chan that’s open to visitors is the partially restored Nik An (sometimes called Tschudi) citadel in the heart of Chan Chan’s monumental zone. There you can see walls and structures adorned with carvings depicting animals including (weirdly) otters and birds plus plenty of graphic geometric shapes. There’s also an area with niches in the wall that hold nearly life-size human figures. 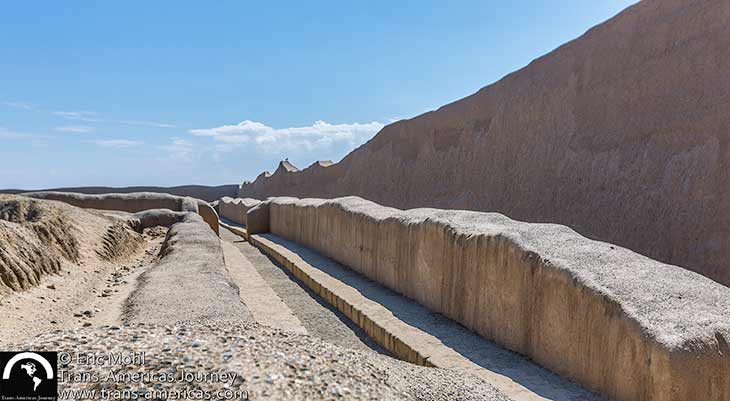 Much of the Chan Chan archaeological site remains unrestored.

We were told that most of the sculptures and friezes in this area have been reconstructed, which makes sense when you compare the condition of what you see within the site to the “melted” remains of other Chan Chan citadels that you pass during the drive into the site. 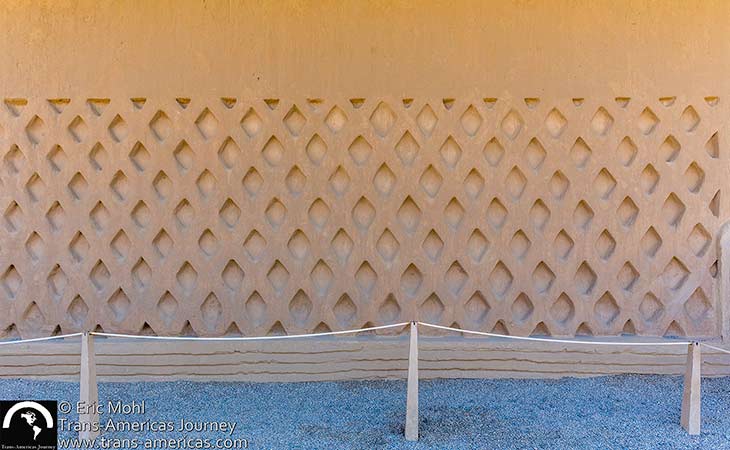 We love the very modern-looking symmetry in the frieze pattern on this wall which was created by the Chimú people hundreds of years ago (and later restored by experts).

The massive size of the overall site and the scale of its patios and structures gave us the same feeling of smallness that we often felt while visiting Mayan archaeological sites in Mexico and Central America. Allow at least an hour to explore Chan Chan. We left impressed.

Here are more photos of highlights (and one lowlight) from the Chan Chan archaeological site in Peru. 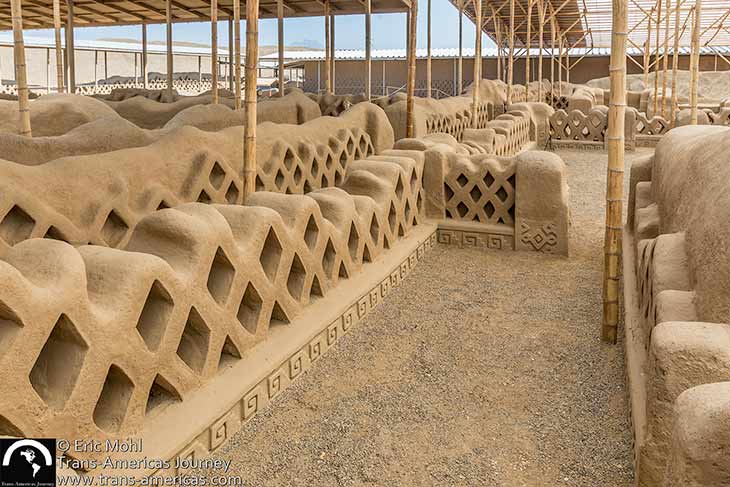 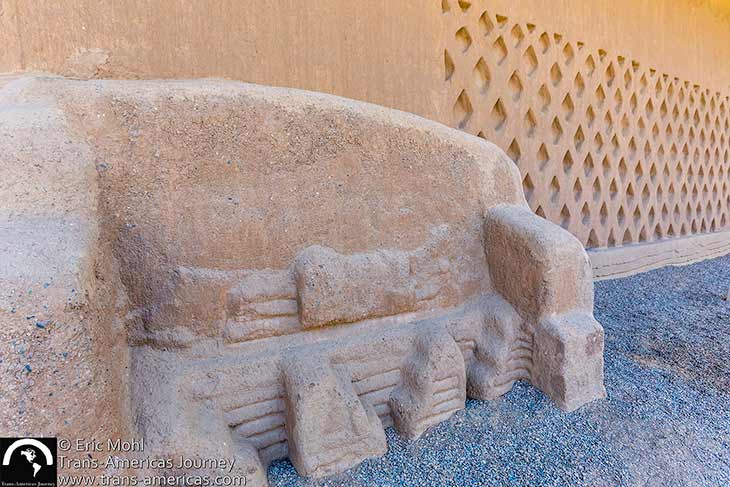 A restored wall and and unrestored element in front of it. 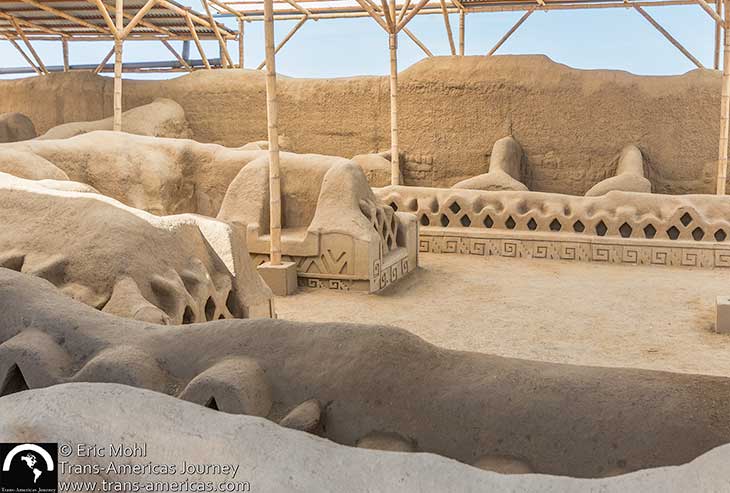 Part of royal buildings at the Chan Chan archaeological site. 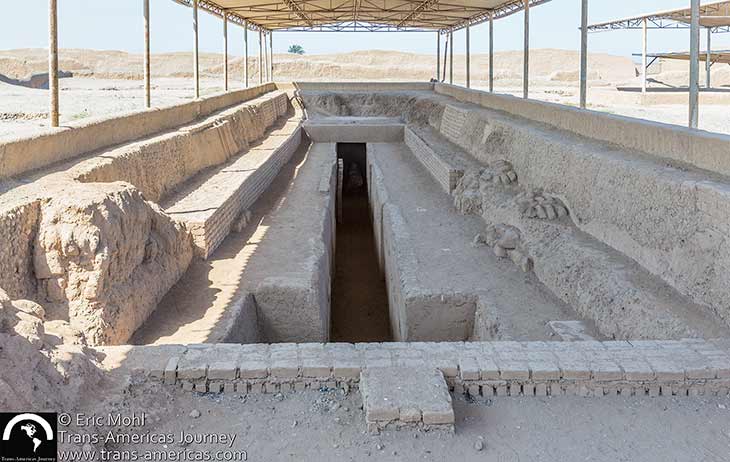 A royal tomb at the Chan Chan site. 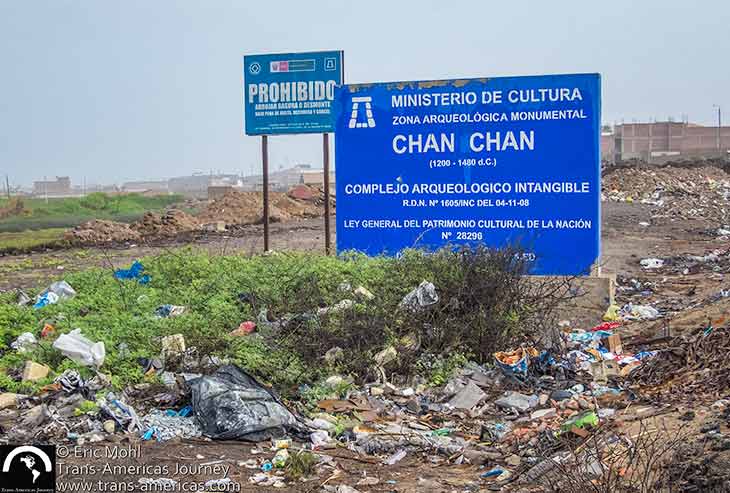 Unfortunately, litter is a very big problem in Peru.

Unfortunately, litter is a very big problem throughout Peru and particularly in the north where we saw piles of garbage almost everywhere–even around these signs that were put up by UNESCO and by the Peruvian Ministry of Culture essentially begging people not to trash places like Chan Chan.