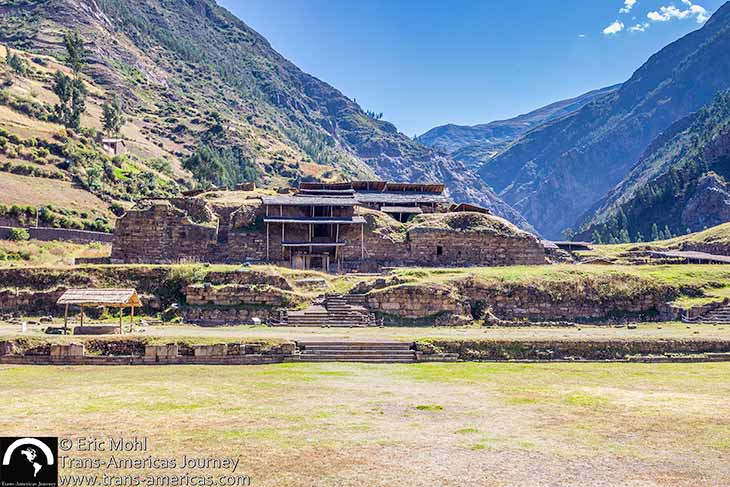 The old temple, which dates back to 900 BC, and a large plaza at the Chavin de Huantar archaeological site in Peru.

The Chavin de Huantar pre-Columbian archaeological site presents what remains of a sophisticated ceremonial center created by the Chavin people between 1500 BC and 300 BC. It was considered the oldest known city in Peru until new studies at the Caral archaeological site, published in 2001, found that site was older than previously thought. Chavin remains, however, one of the oldest and most important archaeological sites in Peru.

Getting to the Chavin archaeological site

Our drive to Chavin de Huantar included a stretch through the Tunel de Kahuish. 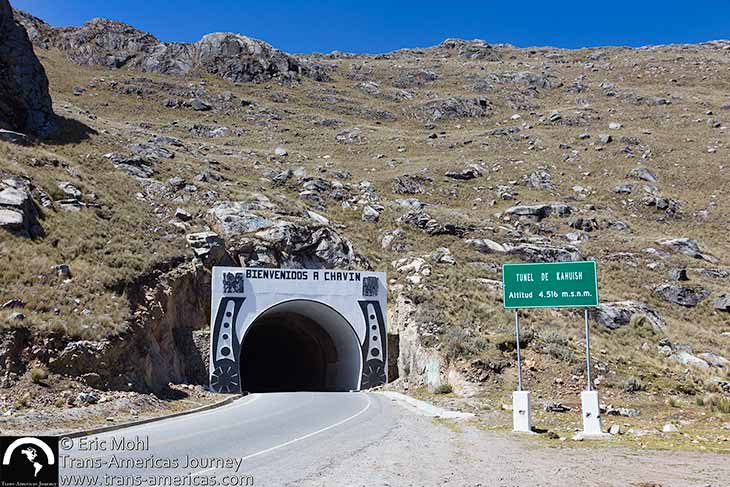 The Tunel de Kahuish was a dramatic part of our mountain drive from Huaraz to Chavin de Huantar.

At 14,816 feet (4,516 meters) the Tunel de Kahuish is the third-highest highway tunnel in the world and it’s the most direct way to get through the Cordillera Blanca from Huaraz to the Amazon side of the mountains where the Chavin archaeological site lies at 10,330 feet (3,150 meters) in a valley just east of the Cordillera Blanca.

The Chavin archaeological site, named for the Chavin pre-Incan people who developed this part of the Andes, covers 4.6 square miles (12 square km). In 1985 it was named a UNESCO World Heritage site, in part in recognition of the site’s age and innovations including a complex drainage system, metalwork (including gold jewelry), and art and decoration–elements that archaeologists believe deeply influenced subsequent cultures.

Carved stones called tenon heads or cabezas clavas (head keys) are an emblematic element of the Chavin archaeological site which is located about 3/4 of a mile outside of town. These carvings, which depict human faces and mash-ups of animals including jaguars, snakes, and condors, were decorative representations of sacred beasts and they were each carved to fit precisely into niches in exterior walls. 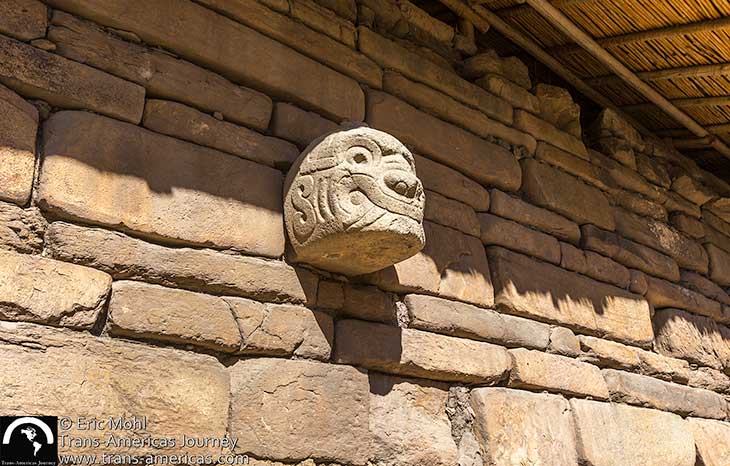 Some experts believe that these carved heads were placed in exterior walls at the Chavin site to scare off invaders.

One theory is that the tenon heads were placed there to scare away invaders. Many of these heads include faces with expressions that have been described as horrified or stoned. Related: Some experts theorize that the shamans who created much of the art at Chavin did so under the influence of the psychedelic drug derived from the San Pedro cactus.

There were also important temples at this site. The old temple dates back to 900 BC. The adjacent new temple was built in 500 BC.  In their prime, these temples became important pilgrimage sites. 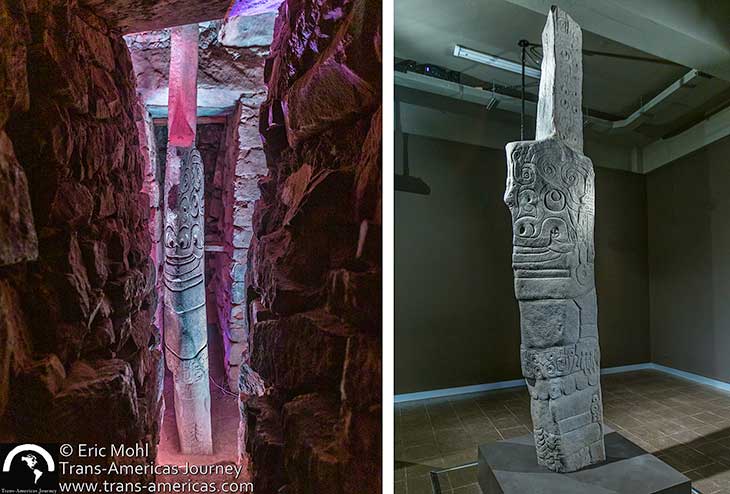 The Lanzón stele inside a temple at the archaeological site (left) and a replica (right) that can be admired in the nearby museum.

Inside the old temple, archaeologists found what is now called the Lanzón stele (lanzón means great spear in Spanish). This 15 foot (4.5 meter) stone is lavishly carved with a depiction of one of the most important gods of the Chavin culture. You can still clearly see its fangs and bulging eyes on the replica of the stele (pictured above right) that’s in the museum near the site. When it was completed, the stone was installed in one of the temples from floor to ceiling (pictured above left). 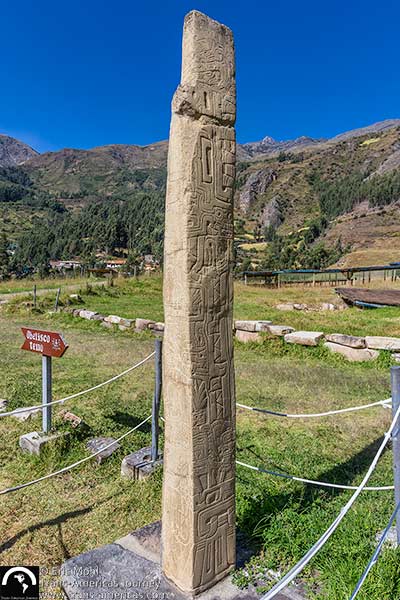 The Tello obelisk at the Chavin archaeological site.

Another carved treasure from Chavin is the Tello obelisk. Named for Peruvian archaeologist Julio C. Tello, this 8.25 foot (2.5 meter) tall trapezoidal stone is carved on all four sides. The work on this impressive piece shows two caimans along with condors, humans, jaguars, plants, and snakes. 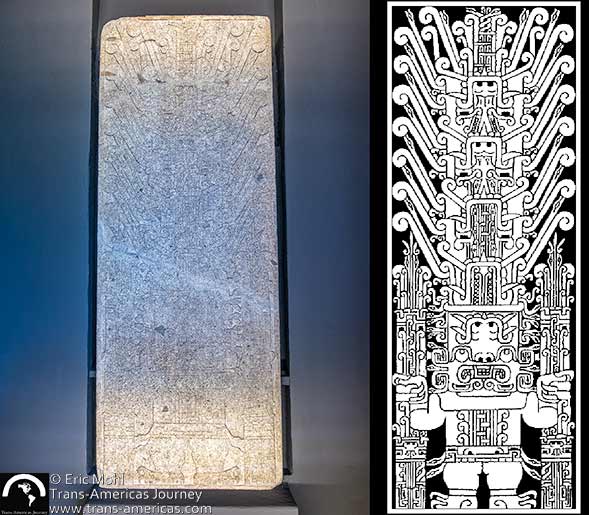 The original carved Raimondi stele from the Chavin archaeological site (left) is now located in the National Archaeology, Anthropology, and History Museum in Lima. The stele is named for geographer and scientist Antonio Raimondi who drew the detailed map of the carvings on the stele (pictured right) in 1873.

The 6.5 foot (1.98 meter) tall and 5.6 foot (1.7 meter) wide Raimondi stele, which is carved with a depiction of the God Wiracocha, is on display in the National Museum of Archaeology, Anthropology, and History in Lima. 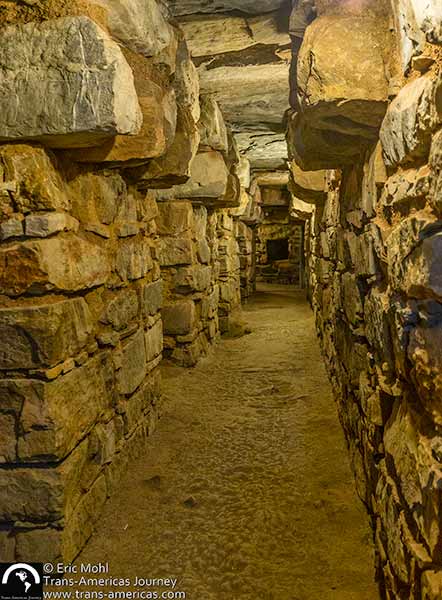 Inside one of the many tunnels that exist underneath the structures at the Chavin archaeological site.

We also enjoyed exploring some of the dozens of interior tunnels and passageways found at the Chavin site. Often referred to as galleries, experts believe the Chavin people may have carried out rituals in these interior spaces. The bones of people believed to have been Chavin construction workers were also found in the galleries and some experts believe they may have been sacrificed. 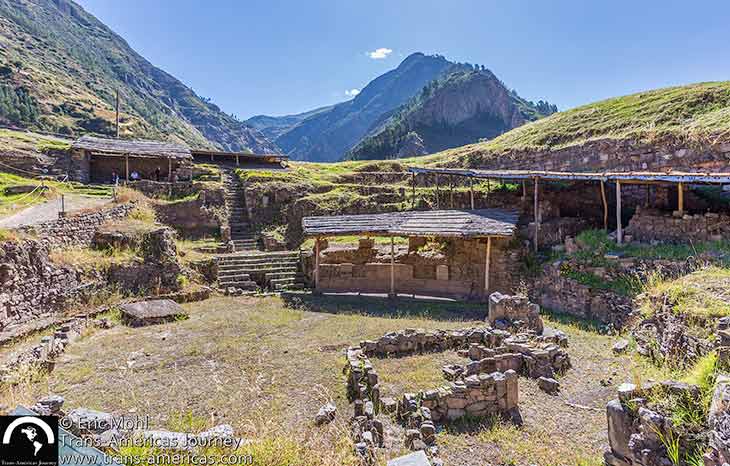 A circular plaza at the Chavin archaeological site.

Except for the mountain setting, this site seemed vaguely Mayan to us thanks to the stepped design of the structures, the interior passageways, the large footprint, the precise plazas, and the carved stone stele. 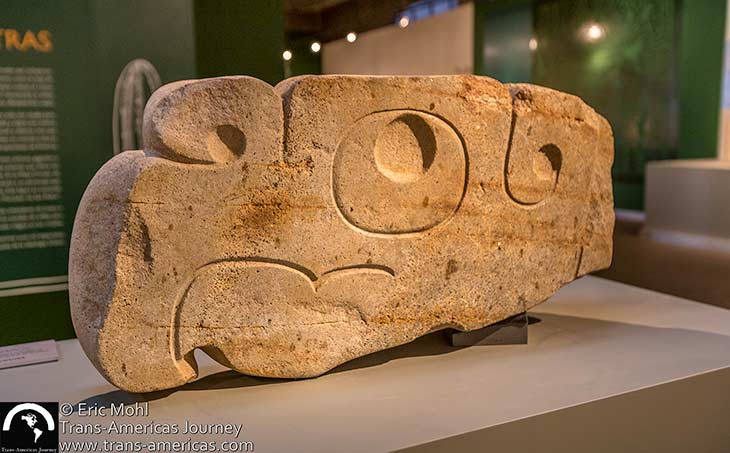 A carved condor head on display in the very good museun near the Chavin archaeological site.

Entry to the jarringly modern but very well-presented Museo Nacional Chavin is included in the ticket price for the archaeological site (15 soles or about US$3.60). 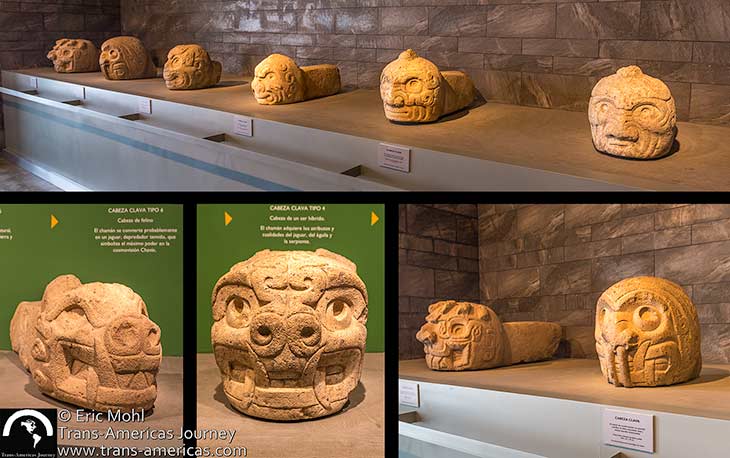 The nearby museum has more than 100 carved tenon heads from the Chavin archaeological site.

The museum is where you’ll see many of the most imposing carved items from the site including more than 100 tenon heads. Some displays include English-language descriptions. The museum is located about 1 mile (2 km) from the archaeological site.

You can visit the Chavin archaeological site as a day trip from Huaraz, but we did it on our way out of the area so we spent a night at Hostal Chavin Turistico in the town of Chavin de Huantar where a bright room with good hot water and breakfast was ours for 100 soles (about US$25). Hotel Inca was a bit cheaper, but the rooms we were shown were like dank caves. Oddly, when we were in town, there was absolutely no Wi-Fi anywhere. This has likely changed. 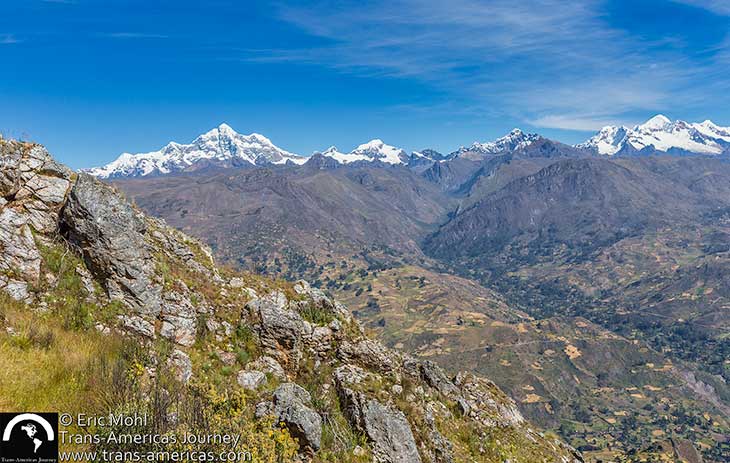 The snow-capped peaks of the Cordillera Blanca over the Conchucos Valley and the Chavin archaeological site below, as seen from our scenic drive out of Chavin.

Instead of taking the direct route back to Huaraz we opted for a scenic drive toward the town of San Marcos. From there, the road took us high up into the mountains, then out of the opposite side of the  Conchucos Valley. Then we drove through the huge Antamina mine which is one of the largest copper and zinc mines in the world. 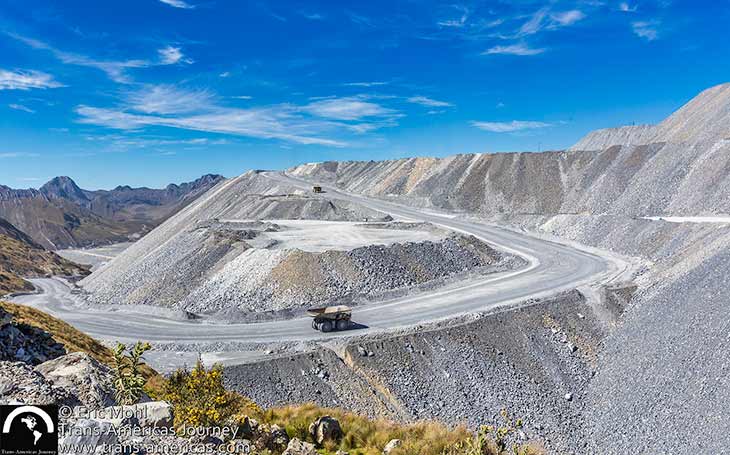 Part of the massive Antamina mining operation where massive trucks work to unearth copper and zinc.

There are well-maintained dirt roads through the massive mine and unlike most mining operations which are guarded and very much private, these roads are open to the public. We mistakenly drove past the mine entrance, then we doubled back and after some confusion and hesitation, we were allowed through the security gate and permitted to drive through the gigantic industrial complex. It’s a bit strange driving through a massive mining operation, but the weirdness is worth it for views of the spectacular Cordillera Blanca as we climbed out of the Conchucos Valley. 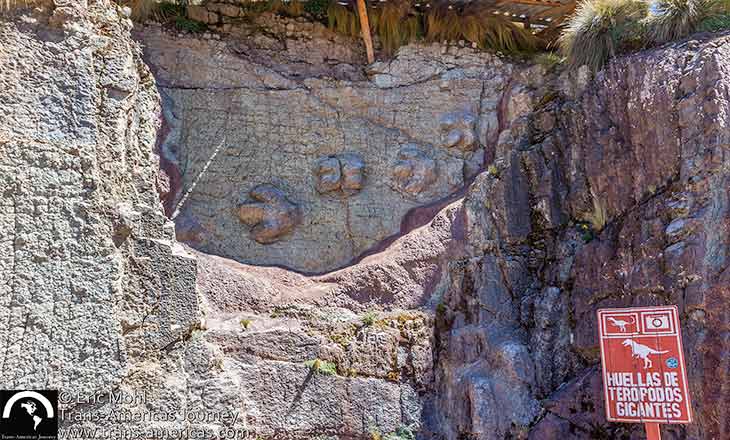 At Km 79 on the Antamina road we passed dinosaur prints near the side of the road. The prints, which were discovered by mine workers and ultimately protected, are clearly visible and dinosaur bones have been found in the area. Shortly after passing the prints, we got our first views of the Cordillera Huayhuash. 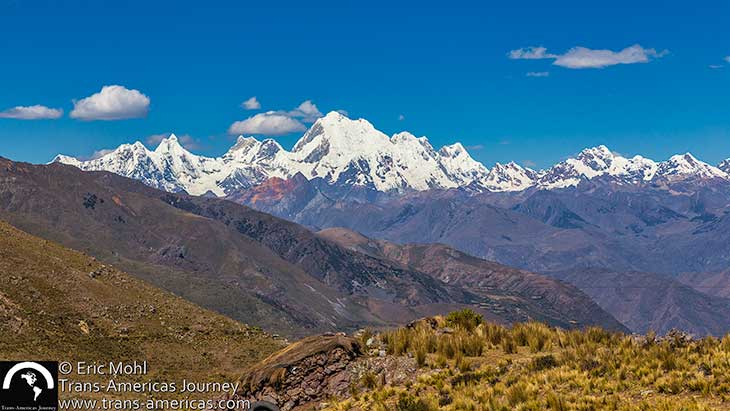 Peaks of the Cordillera Huayhuash.

After passing through the post-industrial wasteland of the mine, we reached a newly paved highway. This dream of a road travels between 14,000 feet (4,267 meters) and 15,000 feet (4,572 meters) but, unlike most high-altitude highways, it was in excellent condition for the entire 28 miles (45 km) from the mine down to the RN3 highway. That’s one small silver lining about mining: even high-altitude roads like this one are kept in good working order when they’re vital to the smooth running of the mine. 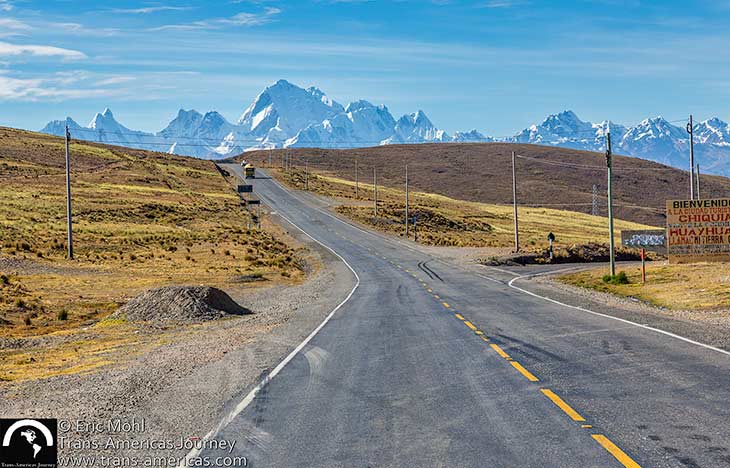 Peaks of the Cordillera Huayhuash seen from the RN3 highway at the turnoff for the town of Chiquian in the valley below.

We drove to the end of the Antimina road and on to the town of Chiquian that sits in a valley below the mountains of the Cordillera Huayahuash. We were told that Chiquian was lovely and charming, but it’s really just a normal mountain town with a smattering of tourists who want to hike the Huayhuash circuit. 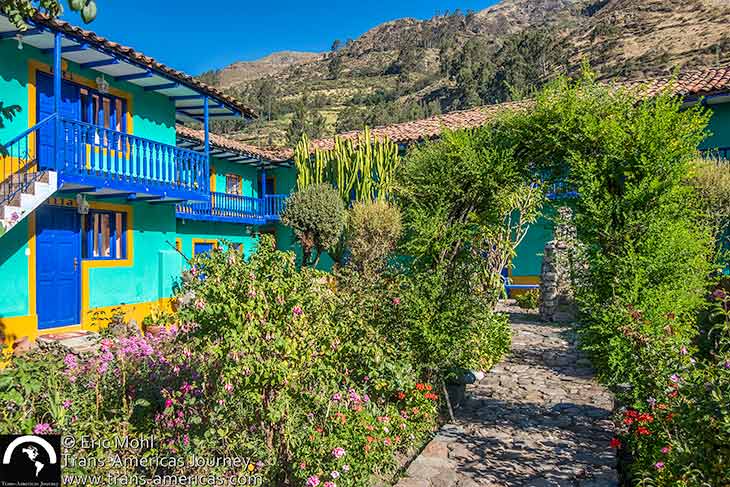 The Los Nogales Hotel in Chiquian.

In Chiquian, we stayed at Los Nogales Hotel which is a very clean economical option with private rooms with private bathrooms, Wi-Fi, a large parking area, and a full breakfast.