Photo Essay: On the Che Guevara Trail 50 Years After his Death in Bolivia

On October 9, 1967 Ernesto Che Guevara, an Argentinean doctor and a driving force of the Cuban Revolution, along with Fidel Castro, was killed in a tiny town in Bolivia. Fifty years after his death, the Che Guevara legend remains vivid around the world. But there’s a lot about his death that we didn’t know (including a helicopter ride, amputated hands, and a secret burial site) until we traveled to central Bolivia and took a guided tour of the town of Vallegrande where his body was brought after he was killed in nearby La Higuera. First of all, the so-called Che Trail isn’t a trail at all. It’s a grab bag of sites that mark the end of Che’s life and form part of his lasting legacy. In the town of La Higuera, where he was killed, you’ll find an imposing bust of the revolutionary. But the main sites, including the Señor de Malta hospital where his body was taken and the Ernesto Guevara Mausoleum which memorializes the spot where his body was unceremoniously buried, are in the town of Vallegrande. Here’s our photo tour.

On the Che Guevara Trail in Bolivia 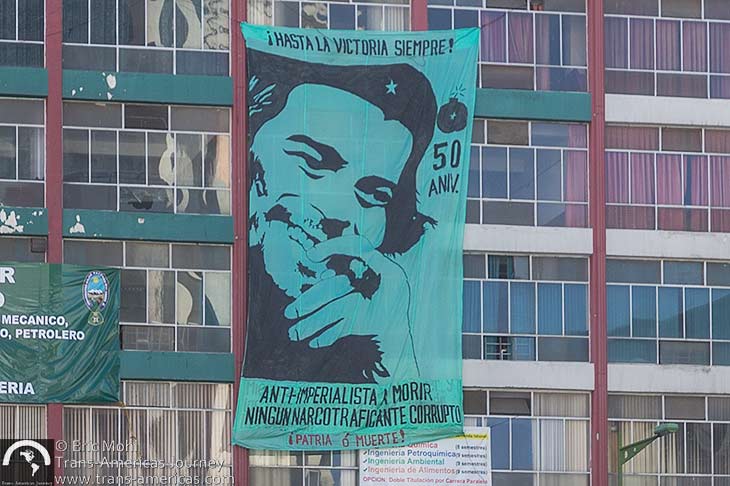 This mural, on a college building in La Paz, Bolivia, marks the 50th anniversary of the death of Che Guevara with a message that seems like a dig at Bolivian President Evo Morales, reflecting the still-political nature of Che’s legend in Latin America. 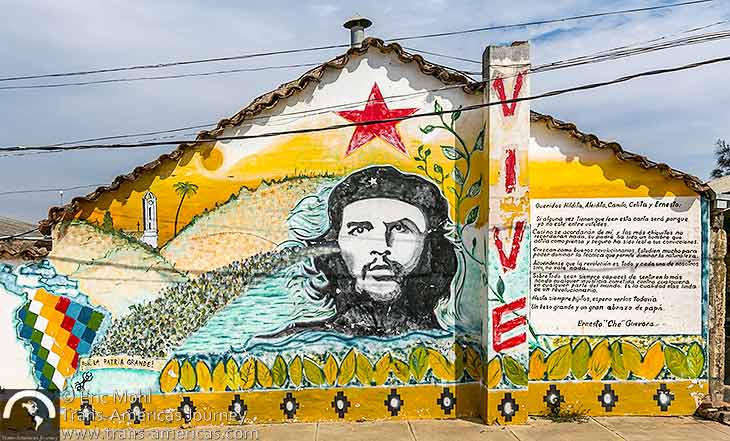 A Che mural in Vallegrande, Bolivia where his body was taken on October 9, 1967. 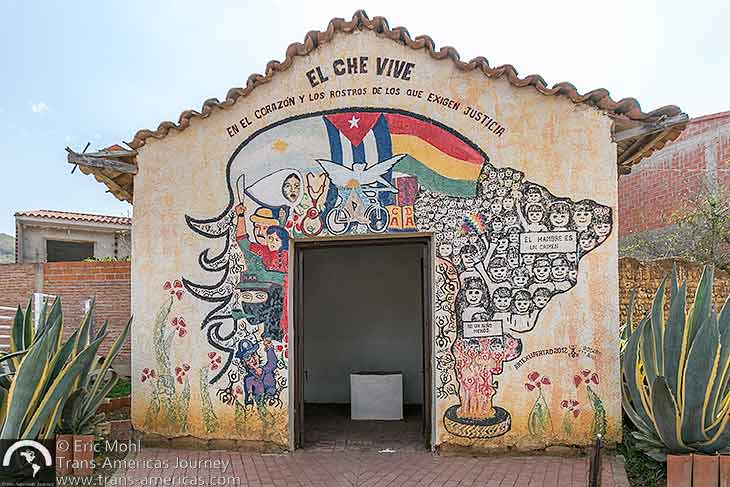 The morgue where Che Guevara’s body was taken after he was killed in nearby La Higuera, Bolivia following his captured by local forces who were being aided by the CIA. 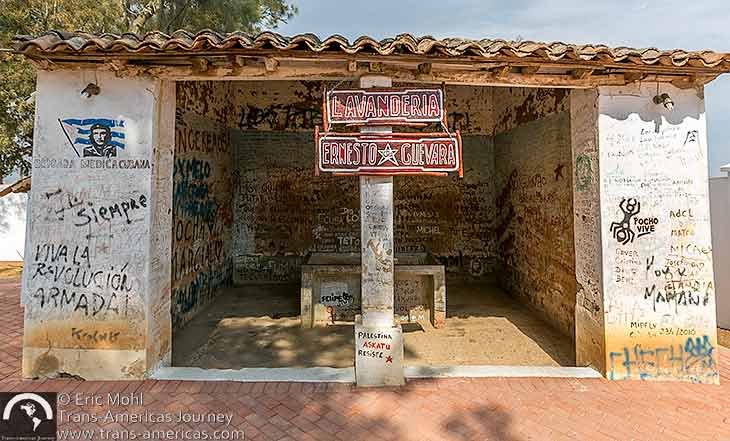 Che Guevara’s body was washed in this laundry room behind the Señor de Malta hospital in Vallegrande, Bolivia. 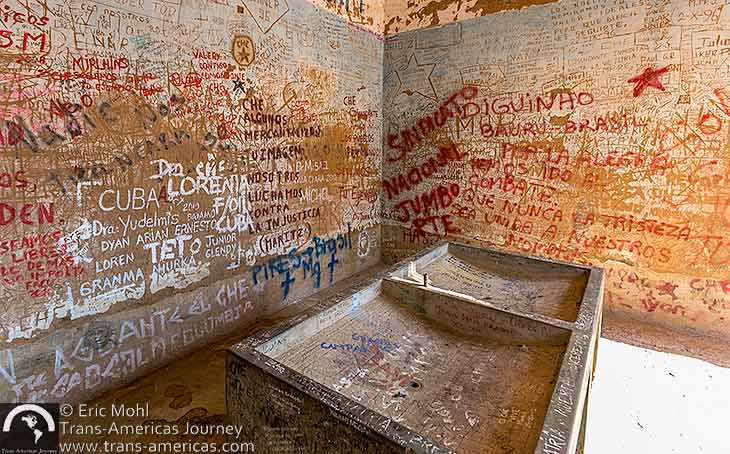 The old hospital laundry room where Che Guevara’s body was washed has become a makeshift shrine. 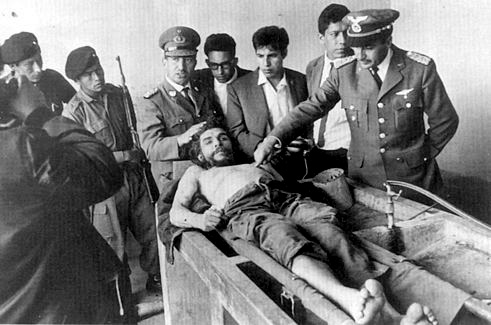 Some people who saw Che Guevara’s body shortly after his death remarked on his lifelike and even Christ-like appearance. Some even said they felt his eyes following them. Photo creidt Freddy Albert 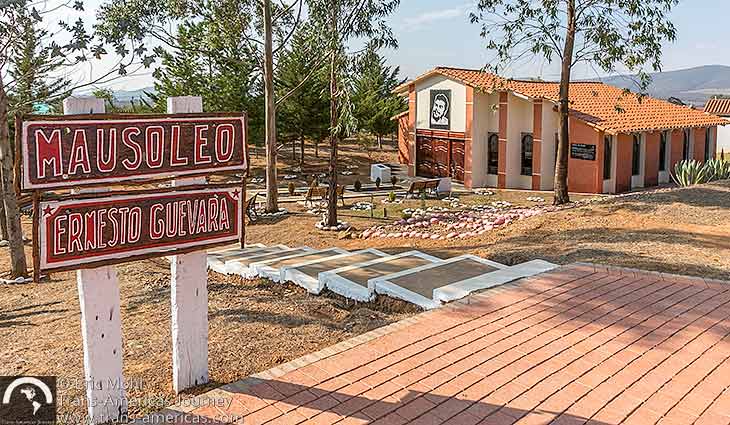 The Ernesto Guevara Mausoleum marks the spot where his remains, along with six other revolutionaries, were secretly buried in 1967. In 1997 the bones were found and Che’s body was sent to Cuba for burial. 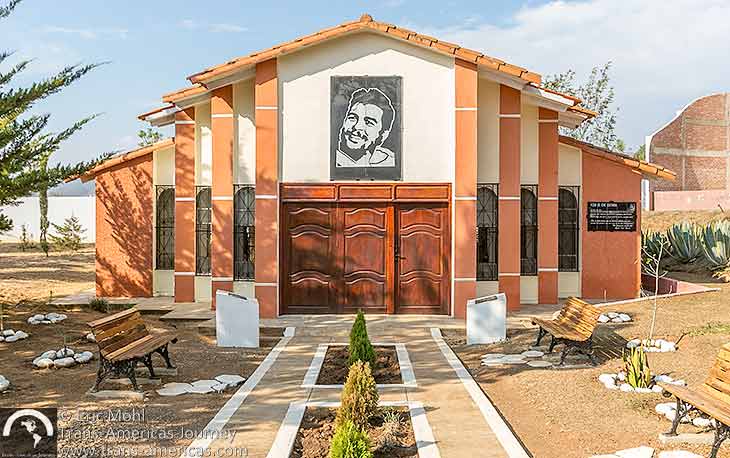 Some of Che’s diaries are on display in the recently-renovated Che museum next to the Ernesto Guevara Mausoleum in Vallegrande, Bolivia.

What you won’t see in Vallegrande is any sign of Che merchandise, like the t-shirts which have become as common around the world as Bob Marley t-shirts.

Get all the travel details you need to do the Che Trail in Bolivia and read even more about what we learned about the life and legend of Che Guevara during our tour (including that bit about the helicopter and the amputated hands) in our complete story about the Che tour for the website for the Biography Channel.