Too Much of a Good Thing – Wejlib-Já, Misol Ha & Agua Azul Waterfalls, Mexico

This area of Chiapas, Mexico gets some of the heaviest rainfall in the whole country, up to 120 inches (300 cm) in some parts of the state. Result? Lots and lots of waterfalls including Agua Azul, Wejlib-Já, and Misol Ha. 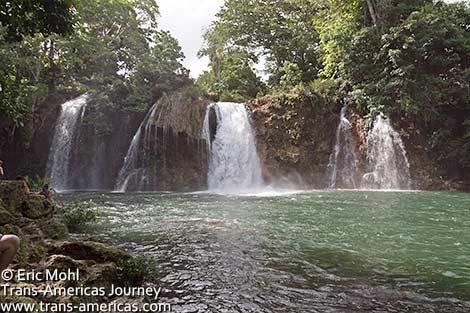 Not far from the Palenque archaeological site we turned down a dirt road in search of one of the area’s top waterfalls. What we found was a mostly empty gravel parking lot. Now, a nearly empty parking lot is either a very bad sign (this place sucks so no one comes here) or a very good sign (this place is a hidden treasure). The Wejlib-Já waterfall (named for a Mayan phrase for falling water) is a good example of the latter. 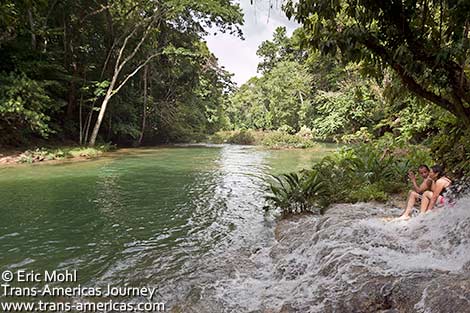 After paying 15 pesos (about US$1.15) each to the local community which owns the waterfall, we walked the path along the falls which is really a series of small, wide falls. That gentleness was part of the reason the water was still clear and though there was plenty of it flowing through the falls, there were still pools that were calm enough to swim and sit in. A couple of Mexican families were happily doing just that.

Palapa covered tables (but, weirdly, no chairs) had been turned into overflowing picnic spots and all that was missing was a six pack cooling in the water.

The parking lot at the much-more-famous Misol Ha waterfall was packed, but we braved the crowds in order to see this 115 foot (35 meter) monster from a very unique perspective. Here a trail takes you up one side of the flow to the other by passing behind the waterfall itself, then crossing to the other side of a huge pool that collects beneath the falls. There’s no way to stay dry.

Because the water was extra high, a safety rope had been put up across the pool and there were even a couple of whistle-toting lifeguards on duty making sure that swimmers stayed behind the rope, far from the dangerous cascade at the bottom of the pool. 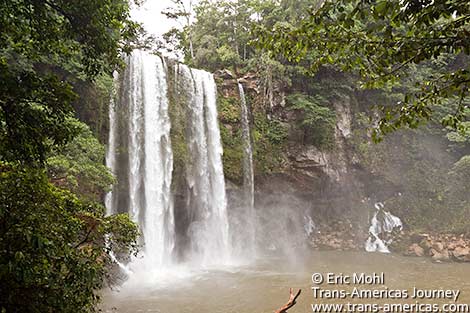 Misol Ha, where the trail takes you behind the spectacular cascade.

And then it happened. When we turned around to see what all the sudden, frantic whistling was all about we saw that a young Japanese man had let go of the safety rope across the natural pool and was struggling to resist the pull of the water. He was no match for the flow, however, and was slowing but surely being sucked toward the lower falls.

In jumped one of the lifeguards (handily answering any questions we may have had about his ability to swim) and moments later he had the (very embarrassed) Japanese man back on dry land.

Check out the view from behind the spectacular Misol Ha waterfall in our video, below.

About 15 minutes further down the road is Agua Azul (Blue Water), an even more famous series of waterfalls. True to Chiapas’ rainy reputation, the sky opened up and it poured for an hour as we arrived at Agua Azul so we pulled over and took a nap in the truck. 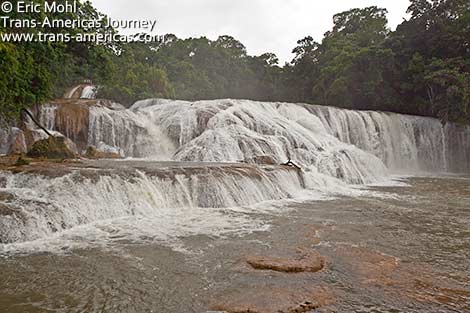 So many people visit Agua Azul that the trail from the parking lot up past the cascading pools is lined with food and souvenir sellers. During our visit the flow had become churned up and filled with silt on its way down the mountains so it looked like a foaming river of latte, not an inviting series of brilliant blue pools that appear to be melting due to the thick coating of mineral deposits draped over their edges. We guess that’s what postcards and imaginations (and the dry season) are for. 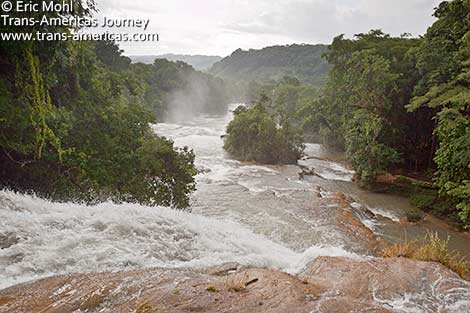 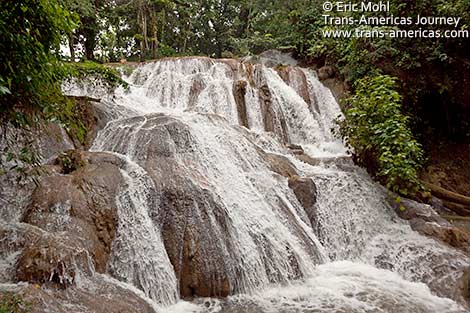 See the high water at the Agua Azul waterfall in action in our video, below.