The Chicamocha Canyon, between the cities of San Gil and Bucaramanga in central Colombia, was formed more than 46 million years ago, covers more than 100,000 acres (404,685 hectares), and is up to 6,500 feet (2,000 meters) deep. In other words, it’s one of the largest canyons in the world. There are a number of ways to explore Chicamocha Canyon, including two that involve traveling through the air. 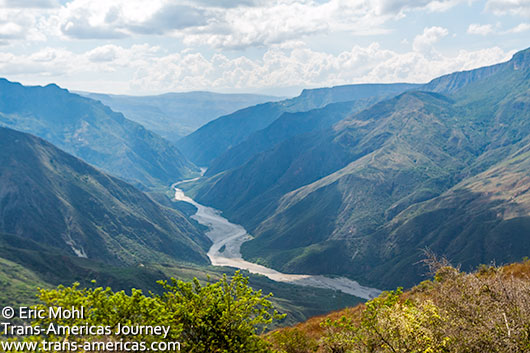 Colombia’s Chicamocha Canyon, one of the largest in the world.

Paragliding over Chicamocha Canyon in Colombia

You can hike it, raft it, kayak it, or visit the theme-parky Chicamocha National Park and ride a cable car over it (more on that later). But perhaps the best way to explore the Chicamocha Canyon is to paraglide over it. It’s certainly the most adventurous way. 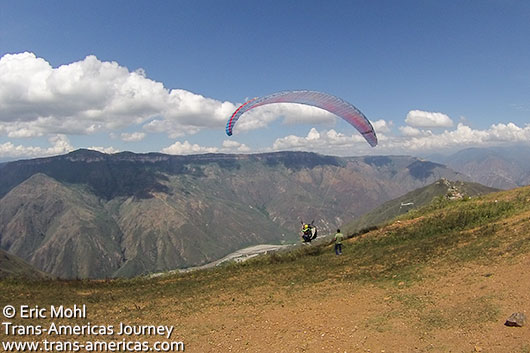 Paragliding is a great way to see Chicamocha Canyon.

When Parapente Chicamocha (parapente is the Spanish word for paragliding) offered to take us up, up and away we said yes. And we said it quickly before “I hate heights” Karen could change her mind. 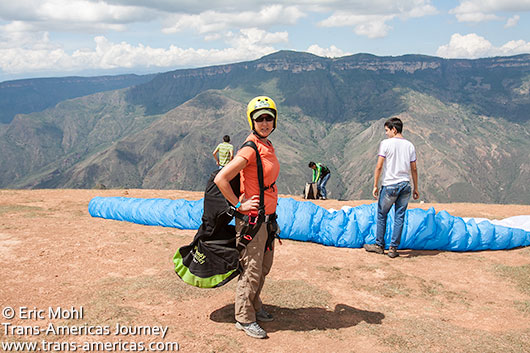 Karen wondering how she got herself into this paragliding mess just moments before take off over the Chicamocha Canyon.

We arrived at the launch site with owner Sergio and a team of wing wranglers and pilots. Then we stood around and watched the birds, waiting for them to catch thermals so that we could too. When the pros saw enough birds catching thermals it was time for us to try it too. 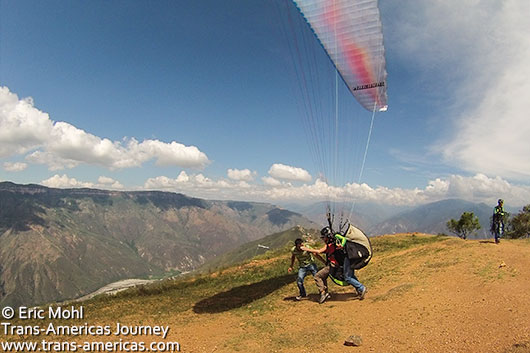 You have to run off the edge of the canyon to begin paragliding over Chicamocha.

This involved getting into the paragliding harness in front of the paragliding pilot (you didn’t think they’d send us up alone, did you?) and then running off the edge of the canyon. Truth be told, Karen dragged her feet a bit. But even she ended up in the air where the thermals, bless them, carried us up a few thousand feet above the canyon floor.

See what Eric saw, in our video from our paragliding adventure over Chicamocha Canyon, below.

We spent about half an hour rising, circling, dropping and rising again over the canyon as the pilots worked the wing to direct us. Eric says the view was great. Karen never had her eyes open long enough to really appreciate it and her forearms are still sore from the death grip she had on her harness. 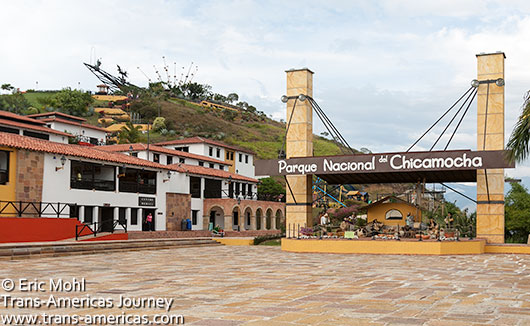 The Chicamocha National Park (15,000 COP/about US$5) protects a section of the Chicamocha Canyon, but instead of spotlighting its natural beauty in the typical peaceful, passive way of most parks, this one shows off its considerable natural attributes in a theme park environment. There are ice cream shops, a synthetic ice skating ring, a goat park, some really, really strange sculptures and monuments and some zip lines. 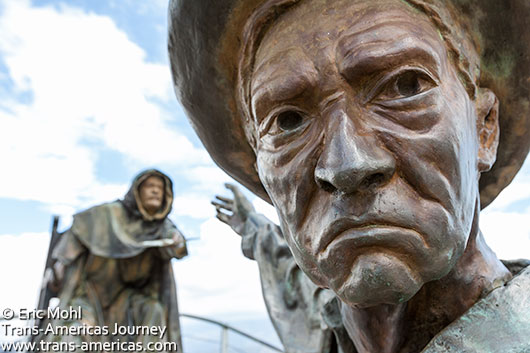 These imposing statues at the Chicamocha National Park have something to do with the history and traditions of the Santander province in Colombia. 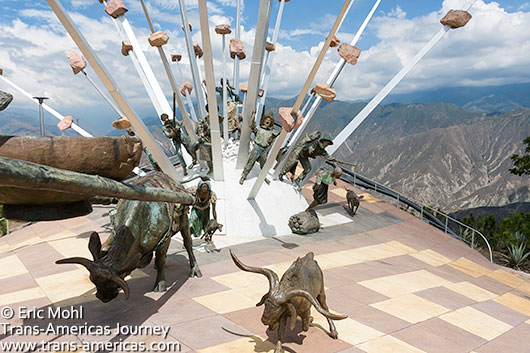 This enormous, spiky, modern sculpture greets visitors to Chicamocha National Park and is a monument to local Santanderean culture. We don’t know why there are goats. 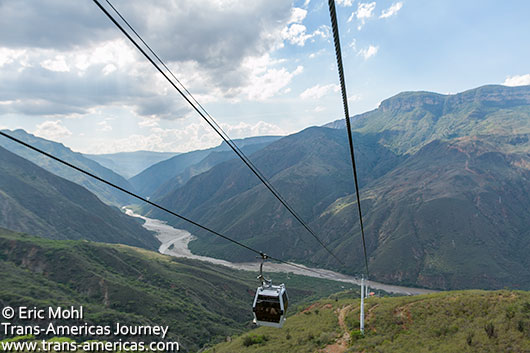 One of the world’s longest cable car systems takes passengers across Chicamocha Canyon.

Check out the cable car ride over Chicamocha Canyon in our video, below.

San Gil may be the self-proclaimed adventure capital of the region, but unless you like a noise, dirty town with a bunch of hostels, skip it. Instead, continue past San Gil about 30 minutes to Barichara, the prettiest town in Colombia where preserved colonial architecture, historic stone streets, peace, quiet, and a wide range of hotels and restaurants (including budget-minded ones) await.