The first time we visited the city of Chihuahua, Mexico we were surprised at how clean, orderly, and historic the city was. So we came back for more. See why in our Chihuahua travel guide. 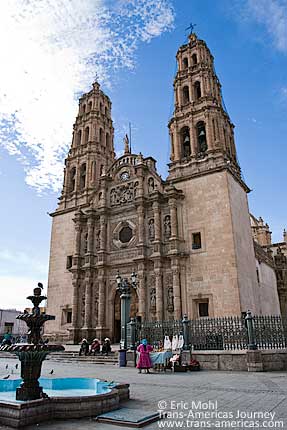 Construction of the beautiful baroque cathedral in Chihuahua began in 1725.

The personality of Chihuahua, Mexico

One of the first things you’ll notice in Chihuahua is that most of the men wear cowboy boots with extremely pointy toes that extend and curl upward. As if these boots aren’t flashy enough, they usually come in colors like baby blue or mint green or tangerine and are often made out of alligator skin and/or manta ray.

Apart from impossibly pointy day-glow cowboy boots, Chihuahua’s other fashion statement is fancy gowns for weddings and quinceañero celebrations–the mega party every 15-year-old girl has. Think of it as the Mexican version of a sweet 16 party, only with petticoats, corsets, and tiaras. 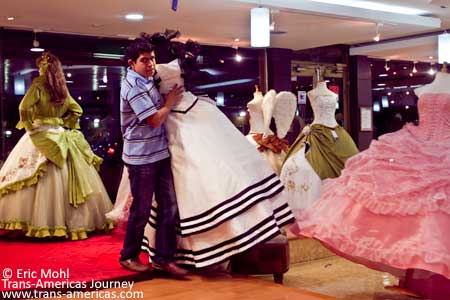 One of the dozens of fancy dress shops in downtown Chihuahua offers something the others don’t. Legend has it that the daughter of Pascuala, the owner of La Popular dress shop, was killed by a black widow spider bite on the eve of her wedding. Heartbroken, Pascuala embalmed her daughter’s corpse and now uses it as a mannequin in her shop window. The thing is eerily life like. We’re just saying. 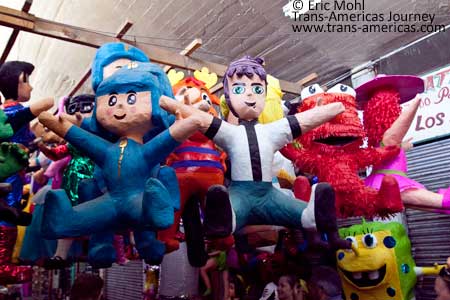 Mass-produced piñatas fill a hallway in one section of a downtown market building.

Piñatas are also big business in Chihuahua and range from crude likenesses churned out by entire families of workers, to hand-crafted custom pieces with amazing details like curled hair and artfully painted eyes. 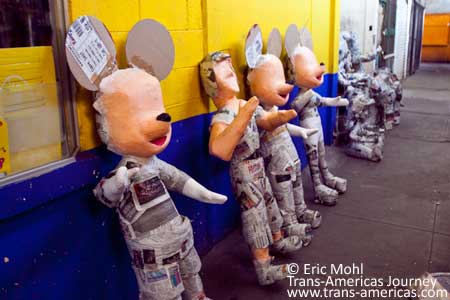 Where to sleep in Chihuahua, Mexico

We knew that Chihuahua had the usual hotel suspects: soulless chains like Holiday Inn and Best Western and a bunch of locally-owned el cheapo crash pads that are clean and safe and that’s about all you can say about them.

But Hotel San Felipe el Real is a whole different stay. Eight individually decorated rooms are clustered around an open-air inner courtyard with a gently gurgling fountain and bougainvillea draped back patio in a restored 19th-century mansion located in a quiet area tucked a few blocks off the main plaza.

Common rooms, including a library and sitting area, are peppered with antiques (just try to keep track of the number of antique sewing machines, record players, and stoves in the place) and a made to order breakfast is served each morning by the ever-smiling Luz in a spacious kitchen and dining area which guests are free to use as well. Oh, and there’s reliable Wi-Fi throughout.

Hotel San Felipe el Real has managed to combine historic touches (original floors and ceilings) with thrift store chic decor and a charming mash-up of Spanish and Mexican influences. The English-speaking owner, Santiago, is also a wealth of knowledge about the area including its main attraction: the Copper Canyon. The world-famous Copper Canyon train actually departs from a station within walking distance of the hotel. Explore Mexico’s Copper Canyon from top to bottom, including a trip on the El Chepe Copper Canyon train, in our series of posts about travel in the Copper Canyon.

Santiago, the gregarious owner of Hotel San Felipe el Real, got us into a food show that was being held at the convention center in Chihuahua. Mennonite cheesemakers (there’s a huge and prosperous community of Mennonite farmers not far from Chihuahua) rubbed shoulders with guys hawking machaca (tasty dried and shredded beef) and gourmet potato chips. It wasn’t long before we’d worked up a powerful thirst. 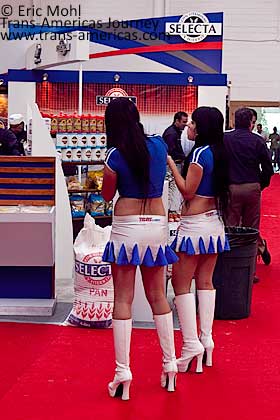 The Tecate Girls grab a snack in Chihuahua, Mexico.

Luckily, the food show also had Tecate and Corona beer on tap and a stall doling out sips of Hacienda de Chihuahua sotol, a regional drink that’s distilled from a plant in the agave family. The process is similar to tequila making.

No convention center event is ever truly complete without scantily clad women traipsing around “promoting” something-or-other. At this event, a gaggle of young women in tiny tops, tinier skirts, and the kind of boots that would make Nancy Sinatra blush played that role as the official Tecate Girls.