Watching traditionally dressed indigenous women (called cholitas) duke it out inside a ring is one of the most unusual things you can do in the city of La Paz, Bolivia. It’s called Cholita Wrestling and while it may not have the production values of the WWF, there are some entertaining similarities (including costumes and choreography). It’s also a fairly poignant cultural touchstone in the country. The gifs and video in this post get you even closer to the action.

Choreographed or not, cholita wrestlers have some legit moves.

What is a cholita?

The word cholita is the pejorative form of the Spanish word chola in reference to the Indian heritage of indigenous communities. When we were in Bolivia, many people we spoke to said that Aymara and Quechua culture and the place of cholitas in Bolivian society had gained respect during the (often controversial) presidency of Evo Morales, the country’s first indigenous president. 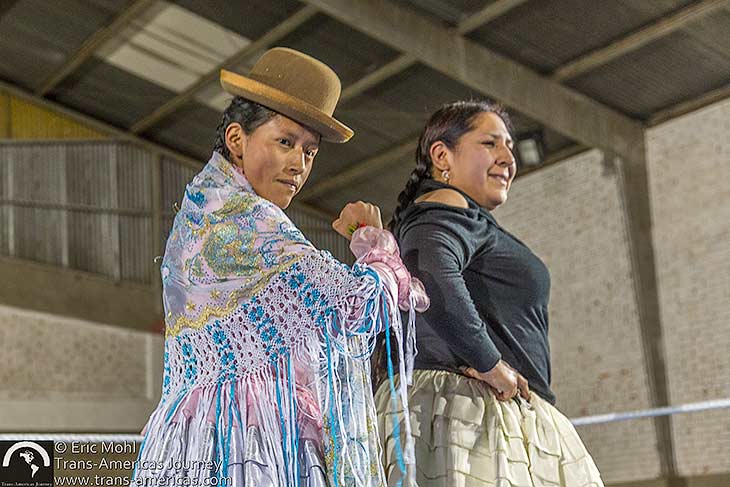 Cholita wrestlers in the ring in La Paz, Bolivia.

Across the country, it’s now very common to see indigenous women dressed in the traditional layers of skirts (called polleras), bowler hat, fringed shawl, jewelry, and braided hair. Though this type of dress was originally imposed on indigenous women by the Spanish, today it’s worn with pride. 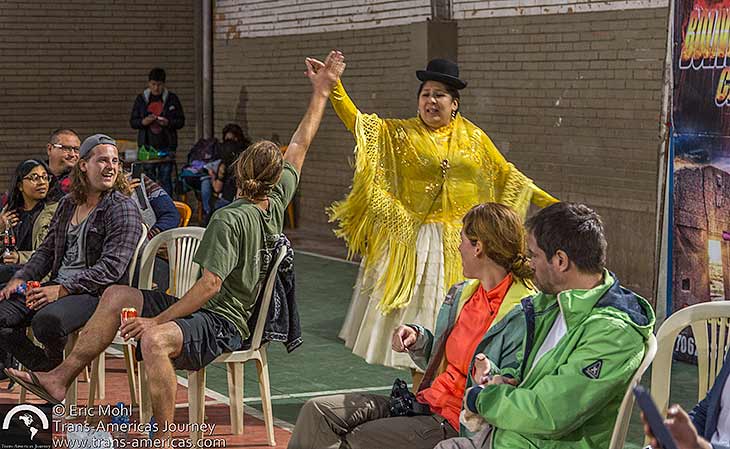 Cholita wrestlers work the crowd before entering the ring.

How did Cholita Wrestling start?

The promoter of an all-male wrestling group called Titans of the Ring noticed an alarming drop off in attendance. As a way to drum up business, he decided to put women in the ring and began recruiting and training cholitas, some of whom were already practicing wrestling skills on their own as a form of entertainment, exercise, and self-defense. The rest is history. 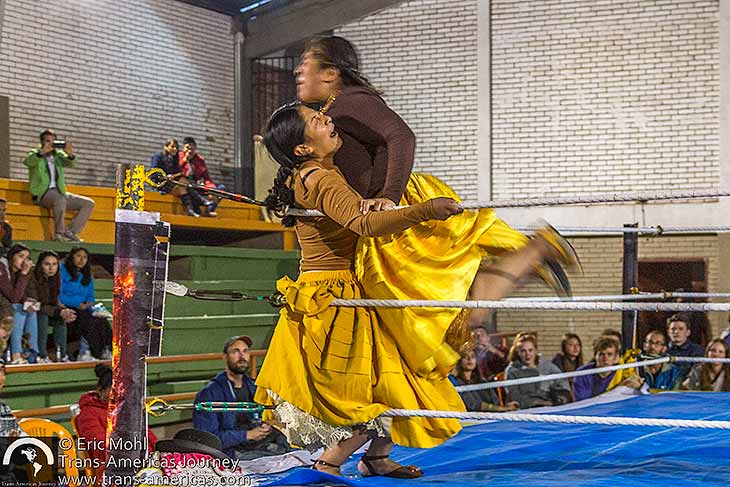 On the ropes during a Cholita Wrestling match in Bolivia.

What can I expect during a Cholita Wrestling exhibition?

Our Cholita Wrestling tour took us to Villa Victoria Stadium which was like a cold high school gym. A rickety-looking ring was set up in the middle of the space and chairs were placed around the ring. About 150 people, mostly foreigners, were there. 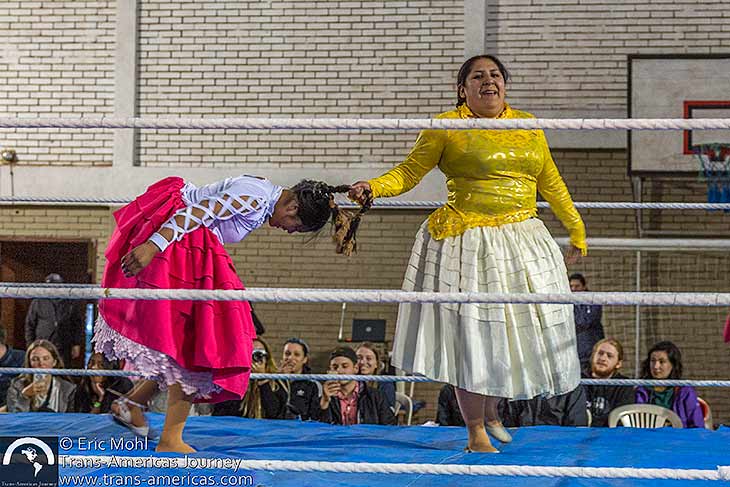 For some reason, the event started with a match between men but it was clear that everyone was there to see the female wrestlers and soon we were into the first of three rounds of Cholita Wrestling. Before each round, the traditionally-dressed combatants paraded toward the ring whipping up support from the crowd. 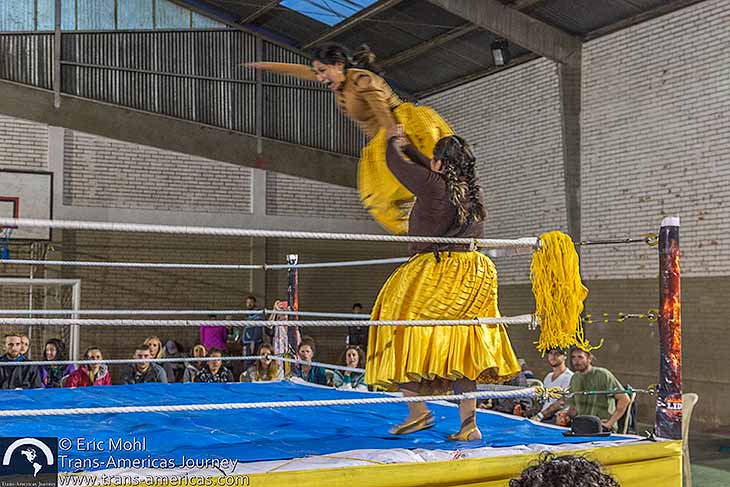 Cholita wrestling in Bolivia takes inspiration from the WWF and lucha libre wrestlers in Mexico.

Cholita wrestlers often take ring names such as La Amorosa (The Lover) and La Podorosa (The Powerful) and one of the combatants plays the role of the “good guy” (la tecnica) and the other represents the “bad guy” (la ruda). 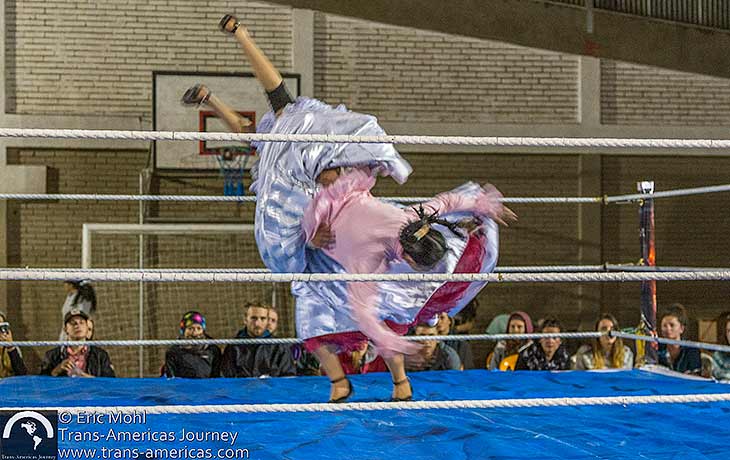 Before entering the ring, each wrestler dramatically removed her shawl, her bowler hat, and her earrings. For the sake of safety and modesty, each cholita was wearing knee pads and spandex under all those skirts. To the untrained observer, it seemed like there were no rules. Kicking, flipping, braid pulling (lots of braid pulling) all happened. At one point a wrestler lost a shoe and continued with one bare foot. 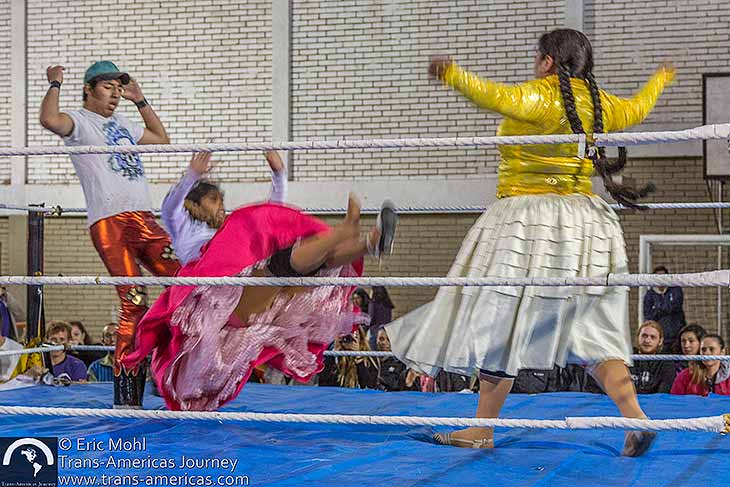 Though clearly choreographed, some moments seemed so authentically dangerous that Karen covered her eyes. Eventually, one of the wrestlers got pinned for three seconds, the male referee designated a winner (usually the wrester representing the “good guy”), and the crowd jeered or cheered based on the fate of your favorite. 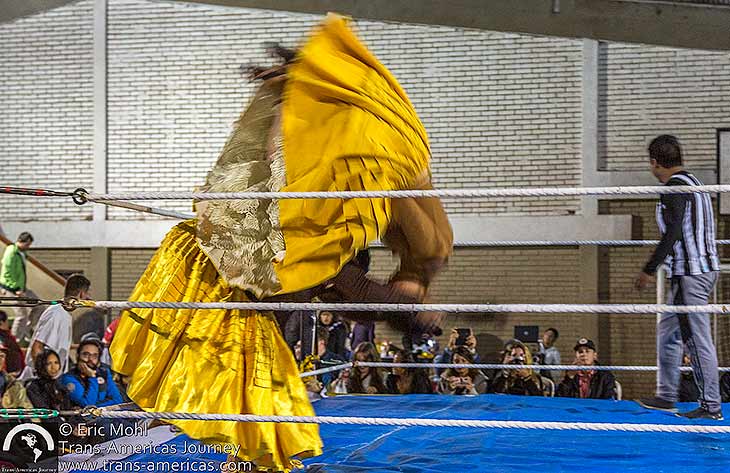 Be warned: these cholitas are bold. If you’re a good looking guy in the audience, expect to receive some smooches as they work the crowd. They may also steal your beer. 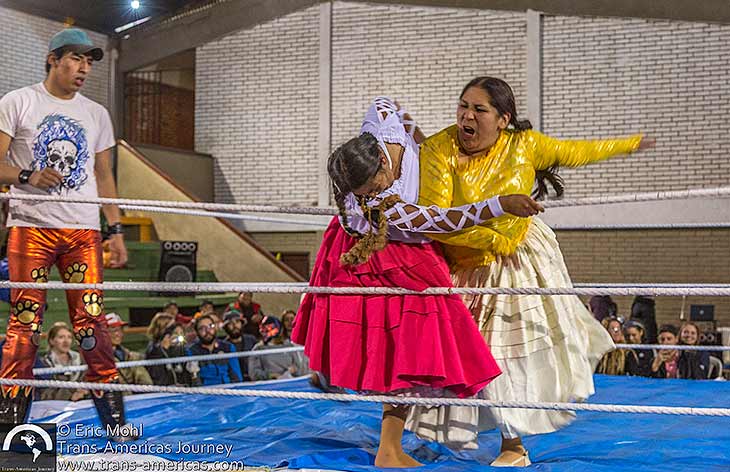 If the slap doesn’t work that angry face will do some damage.

The whole thing was over in about an hour and some of the cholitas entered the ring for photos after the matches, striking classic wrestling poses for the crowd.

See highlights of the matches for yourself in our Cholita Wrestling video, below.

Most tour agencies in La Paz sell tickets to Cholita Wrestling. We paid 80 BS (about US$11) which included transportation to and from the venue, an English-speaking guide, entry to the match, a Coke or a Fanta, a small bag of popcorn, a souvenir keychain, and two vouchers to use the bathroom. Beer, lucha libre masks, and postcards were for sale. Our tour bus left the city center around 5:30 pm and returned around 8:00 pm. 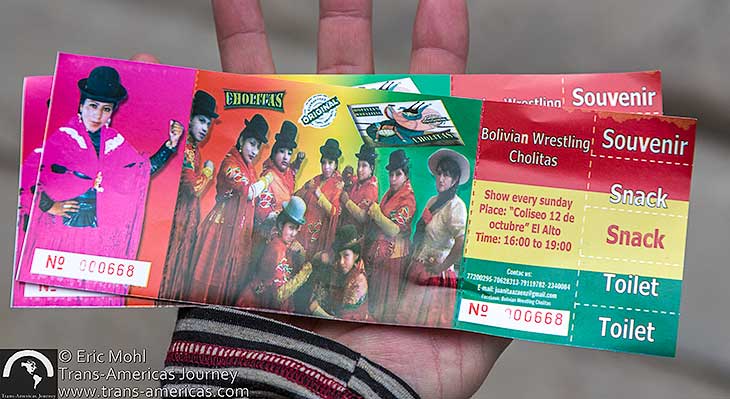 Our tickets to the Bolivian Wrestling Cholitas match we watched in La Paz.

Cholita Wrestling is extremely popular with locals as well and less-touristy matches take place on Sundays in large facilities in the El Alto area on the high plain above La Paz. 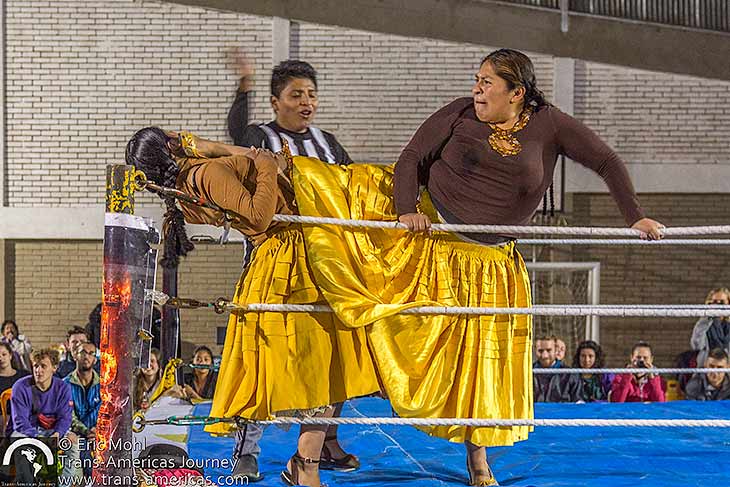 Foot to the face. Classic.

Fun fact: Cholita Wrestling was featured in a 2008 episode of The Amazing Race reality TV show. 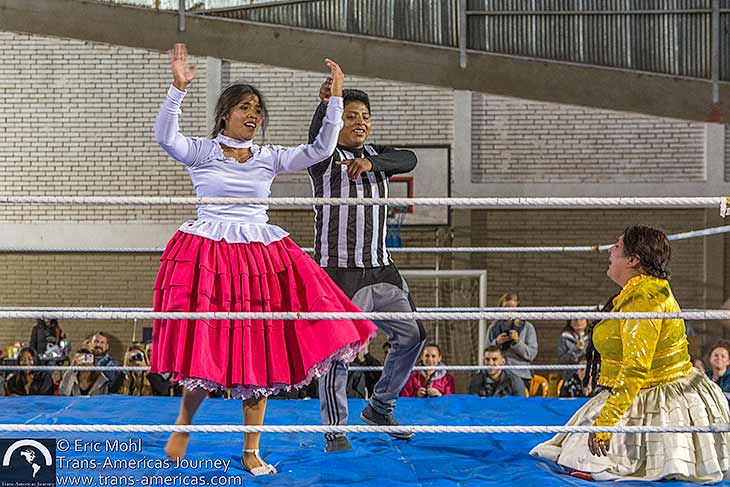 She may have lost a shoe but she won the match.

For more, check out the short subtitled documentary The Fighting Cholitas.