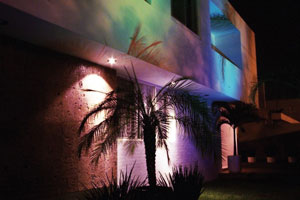 I’ve arrived at the correct address, but there’s no sign of one of the hippest hotels in Mexico.  Literally, NO SIGN.  No arced driveway, no milling staff and no grand façade either.  Created in a sleek and modern home previously owned by one of the hotel owner’s grandfathers, Clarum 101 looks, from the outside, like an ultra-cool apartment building.

Push the discreet buzzer next to the non-descript gate and you are granted entry into an equally cool hotel with a surprisingly warm and welcoming staff. Instantly it feels like you’ve arrived home, only while you were out some generous interior decorator has transformed your previously boring space into the architectural embodiment of hip.

Clarum 101’s super minimalist world of polished concrete, aluminum, wood and an almost entirely black and white palette is enhanced by a chicly soothing soundtrack that plays quietly in all public areas, including the hotel’s ground floor living room that boasts a massive fireplace and one entirely missing wall that leaves the space exposed to a small private garden outside.

Clarum 101, a member of the Mexico Boutique Hotels group, gets the clean, chic and stylish thing pretty darn right in its six spacious rooms and three suites as well, though a few of the retro-inspired furniture may be a smidge too Austin Powers for some. 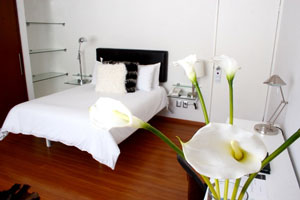 In addition to the amenities found in all individually decorated rooms (luxe bathroom products, plenty of space, plush robes, indulgent linens), my master suite had a home entertainment system (all the better to take advantage of the hotel’s extensive CD loaning library), plenty of desk space and playful furniture including a glass-topped coffee table with legs sculpted into the shape of a person laying on the floor with hands and knees supporting the table top.

The enormous slate-tiled shower in my bathroom didn’t have a single shelf so I had to put my toiletries on the shower floor up on a very high window sill and the closet was covered by a heavy black velvet curtain that was so unwieldy that it made getting dressed in the morning an aerobic activity, however.

Predictably, the staff of Clarum 101 is alarmingly young and hip. Surprisingly, they prove to also be attentive, subtle and talented hospitality providers –some of the best I’ve come across in Mexico. The first morning I was at Clarum 101, for example, I left the hotel early to walk around the neighborhood and grab a coffee. That evening a member of the staff said that he’d seen that I’d returned with a coffee cup and offered to send a staff member to get coffee for me the following morning. Noting that my Spanish leaves mucho to be desired, hotel staff also brought in a copy of USA Today every morning in addition to their regular litany of Spanish language newspapers. They even offer an unpacking service.

Clarum 101’s location is another plus. Located in the Chapalita neighborhood of Guadalajara just a few minutes from downtown, guests benefit from the quiet pace, wide tree lined streets and low slung well-kept houses that feels more like California then Mexico. 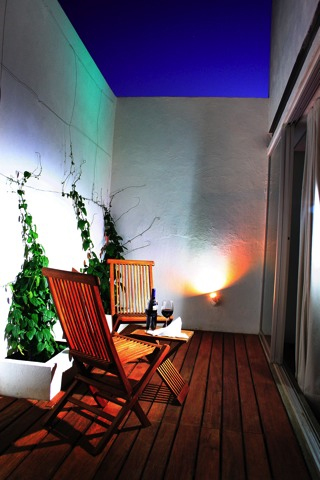 Though Clarum 101 lacks an on-site spa, they have elegantly worked around the issue by partnering with El Chante Spa which offers a very extensive array of treatments from the usual facials, manicures, pedicures and massages to traditional Tezmacal  (a kind of traditional ancient Mexican sweat lodge) and many Asian inspired body treatments in its city day spa which is an elegant mix of Mexican, Tibetan, Indian and Thai décor and also has a roomy sun deck. El Chante even provides a complimentary car and driver to deliver Clarum 101 guests to and from the day spa just a few minutes away.

Like most spas in Mexico, the prices at El Chante are shockingly affordable (my flawless 80 minute holistic massage cost less than $70 at the current exchange rate) and Clarum 101 guests get special rates as well making a spa splurge even more of a bargain—just be prepared to don the strange disposable paper underwear that most spas in Mexico hand out.

The hotel is currently re-doing the roof bar and lounge, expanding the lobby restaurant and upgrading the garden breakfast area but work is expected to be completed by May of 2009. What the hotel won’t be adding during the current renovations is a sign. Clarum 101’s privacy-seeking celebrity guests like the hotel’s discreetly attentive nature and you will too.

Rates start at: $195 USD including continental breakfast, a welcome glass of wine (no children and no pets).