The La Quebrada Cliff Divers have been icons of Acapulco since the group officially formed in 1934 with dramatic death-defying dives into a narrow, rocky gulch in the Pacific coastline below the Hotel Mirador. It’s a daring show that still dazzles. 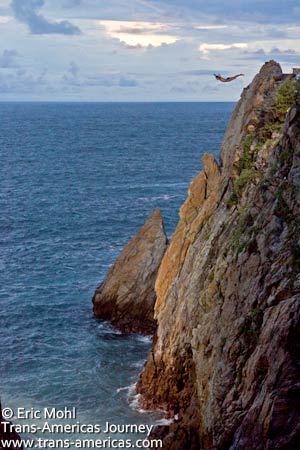 A classic and spectacular dive from a La Quebrada Cliff Diver in Acapulco, Mexico.

A veritable Who’s Who of celebrities have watched the spectacle over the years including Frank Sinatra and Elizabeth Tayor. and ABC’s now-defunct Wide World of Sports show even featured footage of the divers’ feats in its show opening montage for years. More than 75 years later, however, we feared the La Quebrada Cliff Divers may have become a cheesy sideshow. We were wrong.

A man wearing a black speedo begins climbing up a sheer cliff wall. The Pacific Ocean churns below him as water surges in and out of a tight gulch (called a quebrada in Spanish). He’s barefoot and there are no ropes, but he climbs quickly and confidently. This isn’t his first time. He’s soon followed by others and, once at the top of the cliff, each man (and the occasional woman) passes by a shrine to the Virgin of Guadalupe, the beloved patron saint of Mexico, for a quick blessing. The La Quebrada Cliff Divers are going to need it. 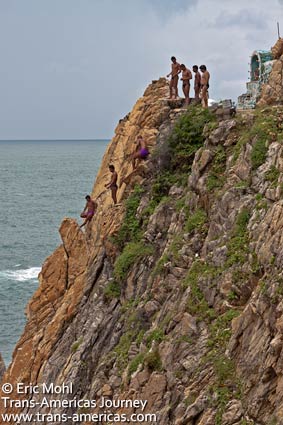 Once in position, La Quebrada Cliff Divers take a moment to prepare themselves and wait for the right conditions in the churning waves and surge below.

Each diver settles on a rocky perch as their eyes gauge the waves below. Reading the surge is essential. The water, more than 130 feet (40 meters) below them, is about 16 feet (5 meters) deep at the height of the surge, but substantially shallower at the low point of the surge. Time your dive incorrectly, and you might hit bottom. 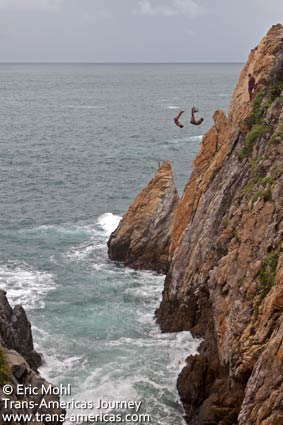 A double-double from the spectacular La Quebrada Cliff Divers of Acapulco.

Attuned to some silent signal (and the hand cues of divers in the water), divers jump into the narrow space between the rock walls—no more than 50 feet (15 meters) across as its most ample point. They dive chest out, arms extended, head high as if they’re looking at the sky, not the fast-approaching water below. They tuck and twist. They somersault.

Each diver disappears below the surface like an arrow before bobbing back up with a smile that gives onlookers permission to close their mouths and breathe again, at least until the next diver in the lineup takes the plunge. 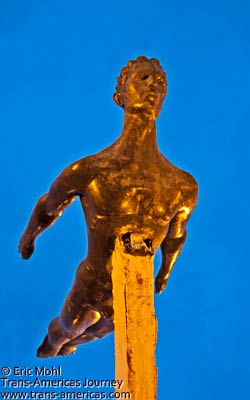 This statue commemorating the La Quebrada Cliff Divers of Acapulco looks down on the gulch and the divers’ ongoing feats.

Hollywood’s glitterati may not be flocking to Acapulco to see the divers anymore, but these guys have become stars in their own right. An international film crew was shooting a GE commercial featuring the divers while we were there.

Being a La Quebrada Cliff Diver is still an honored profession with skills passed on from experienced divers to new recruits. The divers perform five 30-minute shows 365 days a year and we watched more than a half dozen performances, including the spectacular 10:30 pm finale dring which divers hold flaming torches, and we were wowed every time.

The following composites of photos are a kind of time-lapse display of the various stages of two of the most amazing daytime dives we saw. 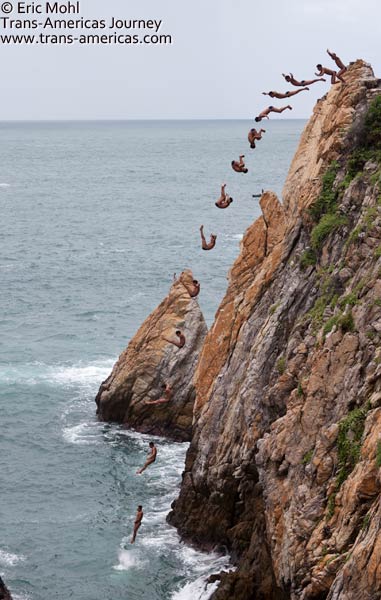 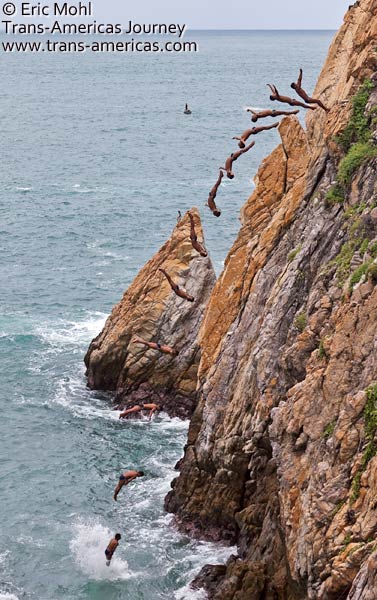 You might see some of the following dive sequences in a GE commercial that’s currently on television. Note the camera in the lower left-hand corner… [nggallery id=8]

And here’s our video of some of the daytime diving….

The following composites of photos show various stages of two of the most amazing nighttime dives we saw, including the gorgeous finale dive with lit torches. 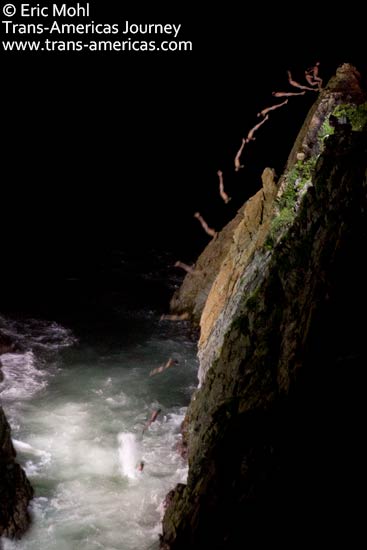 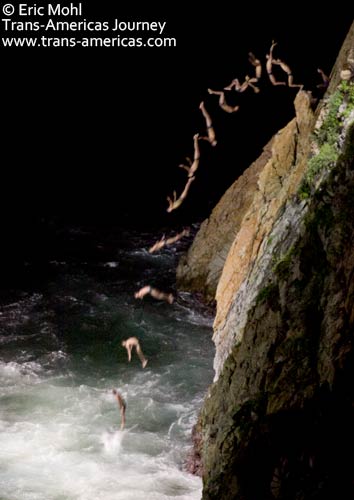 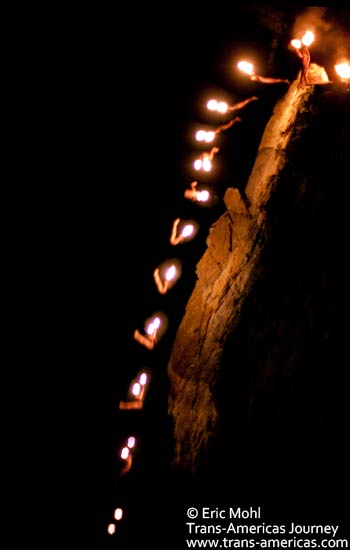 And here’s our video of some of the night diving…