The star-studded New York Fashion Week may get all the attention, but it’s not the only massive annual fashion event in the Americas. Every July, one of Latin America’s largest fashion events happens in Medellin, Colombia. It’s called Colombiamoda and we were there to witness crimes against denim, butt enhancing undies, half-naked Latin models (of both sexes), knife-proof hoodies, and one bona fide Brazilian supermodel. 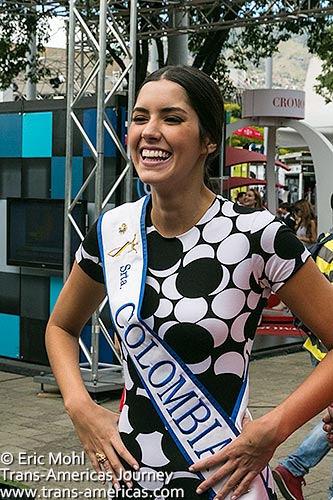 The 25th annual Colombiamoda event included 670 brands and 6,300 buyers (1,700 of them from other countries) all coming together to generate around US$250 million worth of business. More than 15,000 visitors also took part in Colombiamoda, including Miss Colombia, Paulina Vega Dieppa, during the course of the three day event. Many of those visitors were drawn to Colombiamoda for the chance to see a real, live fashion show on a runway with models and everything. 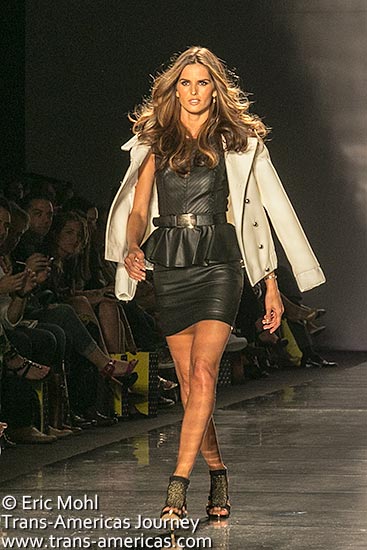 Brazilian supermodel, and former Victoria’s Secret Angel, Izabel Goulart only walked in one runway show but she made it count.

The Spanish word for “runway” is pasareles. At Colombiamoda 2014, the Spanish word for runway supermodel was Izabel Goulart. This Brazilian beauty was a Victoria’s Secret Angel from 2005 to 2008 and though she (and her endless legs and six-pack abs) only took part in the Studio F show at Colombia, during her brief time on the runway she easily blew all of the other models away.

We really liked the addition of live musical performances during some of the runway shows at Colombiamoda, particularly the high-energy performance by ChocQuibTown, a Grammy and  Latin Grammy-award-winning Afro-Colombian hip-hop funk band from the Choco region of Colombia, during the GEF show. Check them out in our video below.

While Latin fashion is certainly influenced by global trends and international designers, it does sometimes march to its own peculiar drum as we saw when we toured the hundreds of vendor stalls at Colombiamoda where individual designers and companies were showing their goods.

Day-glo colors were a big trend in everything from jewelry to workout gear. Even more eye-catching were the butt-enhancing undergarments for sale for both men and women (though mostly women). 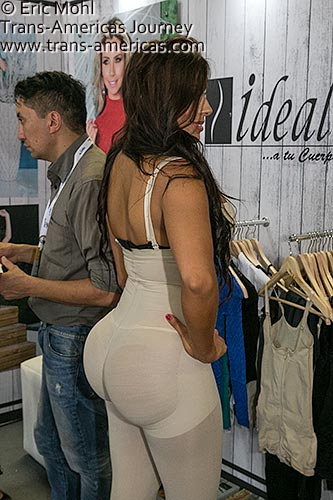 Kim Kardashian, eat your heart out. Just one example of butt-enhancing undies at Colombiamoda in Medellin.

Stand after stand displayed padded and reinforced underwear built to give the wearer the illusion of more junk in the trunk.  And we’re not talking about just a bit of padding and lift. Some of these elasticized, elaborately engineered contraptions seemed designed to essentially strap two pillows to your sorry flat ass.Think of it as the downstairs equivalent of the push-up bra. 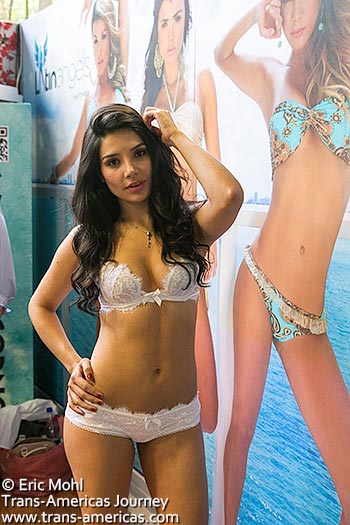 There were plenty of half-naked models of both sexes at Colombiamoda.

Not surprisingly, the swimwear and underwear/lingerie areas were the most crowded thanks to the fact that 99% of the booths had live, mostly naked models of both sexes. The most sophisticated brands and styles didn’t trot out a hottie, but almost everyone else (including lingerie makers with inscrutable names like Jacky Form and St.Even) had at least one man or woman standing around looking bored and chilly. 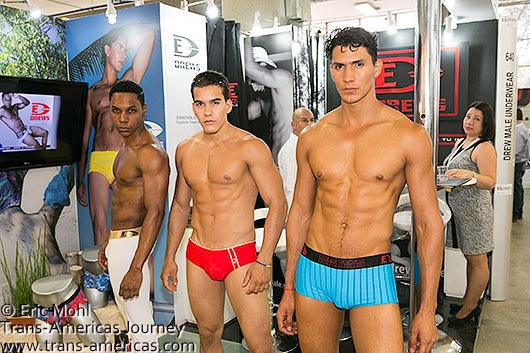 Plenty to look at here, but don’t miss the expression on the woman’s face in the background.

In the swimwear section we came across Pitahaya Swimsuits where, in addition to models, they had two fully clothed indigenous Kuna women sitting in chairs busily working away on the bright, geometric, hand-stitched designs they’re famous for. Designers at Pitahaya Swimsuits, a Colombian company, incorporate panels of fabric stitched by the Kuna into their cool, contemporary swimsuits. 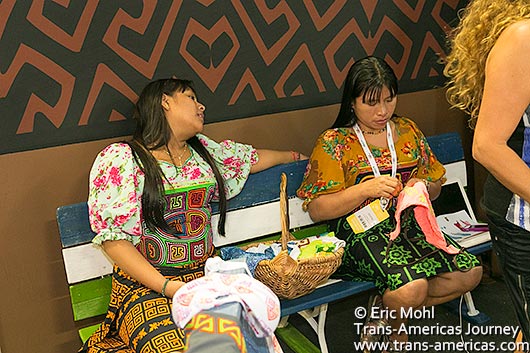 Indigenous Kuna women hand-stitching bright and intricate traditional patterns that are then used in designs by Pitahaya Swimsuits.

In the accessories section, mostly full of death heels and clunky jewelry, we saw another noteworthy vendor. Arte & Tejido works with the Gases del Caribe Foundation to employ women in a coop to weave bright, traditional bags in modern Latin designs like Frida Kahlo’s face, day of the dead skulls, etc. 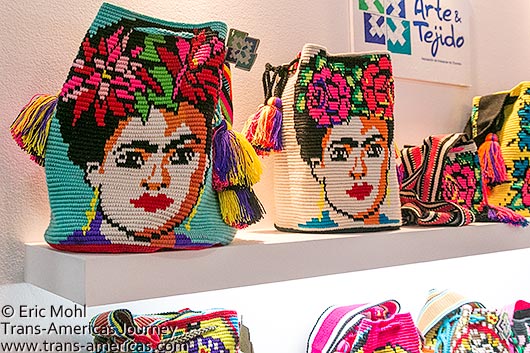 A partnership between designers and traditional artisans produces these bags with modern motifs but old techniques.

There wasn’t much in the way of clothing or accessories for men, but one booth stood out. Miguelo Romano is a collaboration between businessman Michael Puscar in Medellin and designer Neil Gallagher in Brooklyn (he helped launch Lucky Brand and designed for Diesel). 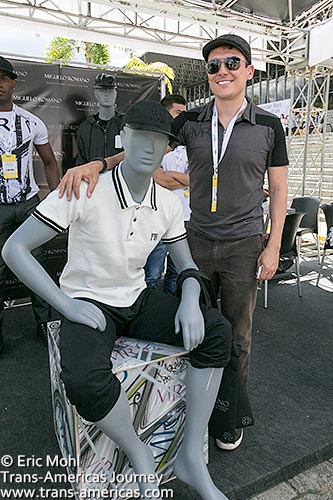 Michael Puscar of Miguelo Romano clothing at Colombiamoda next to one of his slash-proof pieces of clothing.

They’re producing cool-looking hoodies, polo shirts, and more using a fabric which they swear cannot be penetrated by a knife. Part of the inspiration for a line of slash-proof clothing came from the fact that Neil himself was stabbed when he was 19.

Never have we seen so many crimes against denim as we did at Colombiamoda. Stand after stand after stand showed faded, washed, ripped, torn, shredded, be-dazzled denim turned–against its will and better judgement–into hot pants or high-waisted jeans or (oh, God) jump suits in skin-tight varieties or “Can’t Touch This” baggy varieties which made Eric exclaim “oompa loompa!”. 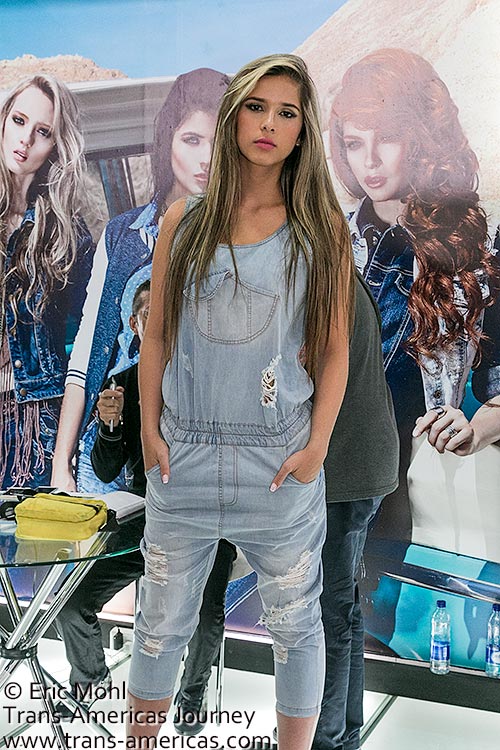 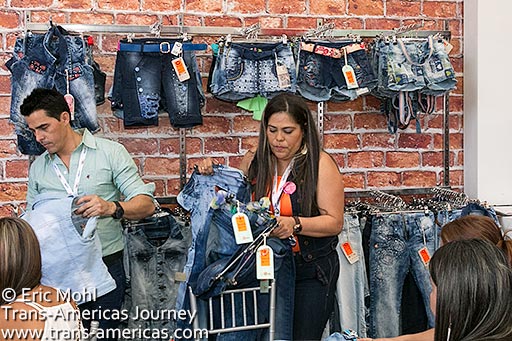 No crime was too heinous to commit against denim at Colombiamoda in Medellin.

New York Fashion Week may have Colombiamoda trumped when it comes to supermodels, big name designers, and general glitz and glam, but Colombiamoda does deliver one thing that you’re not going to get at fashion week in New York City: a friendly, fun, party atmosphere with food and drink vendors and live music and a general Latin fiesta vibe which celebrates the world of fashion without the fashion fascism of US and European fashion events.

Distressed denim and big butts for everyone!

And now, a few more shots from the Colombiamoda runway. 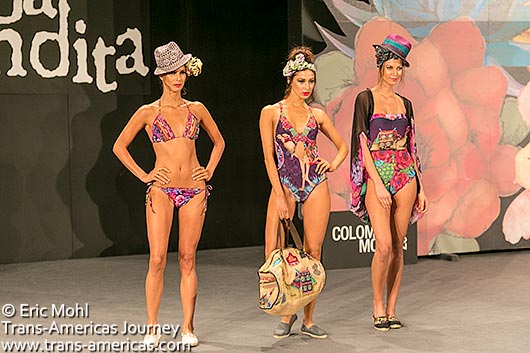 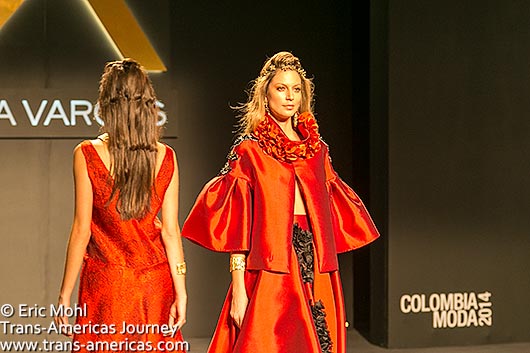 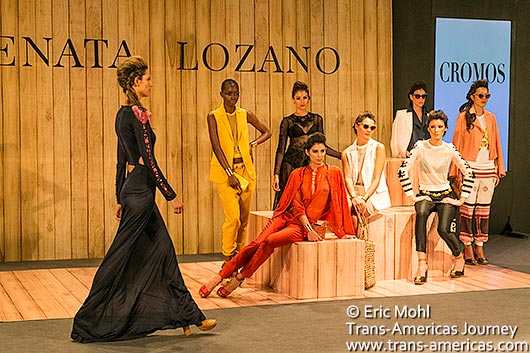 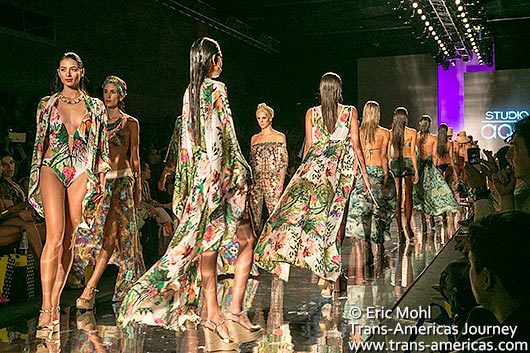 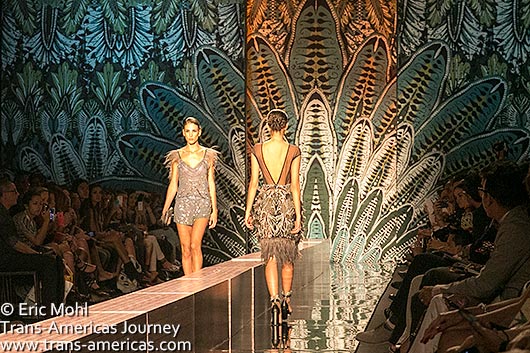 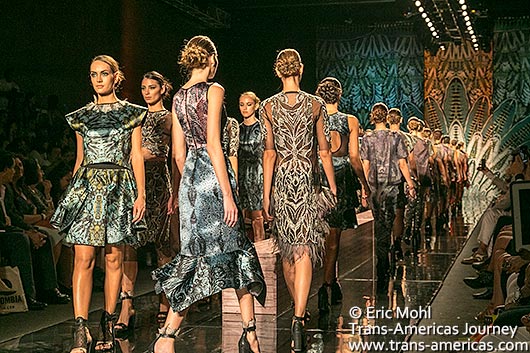