You’re gonna pay dearly if you want to visit the most popular tourist attraction in Honduras. Is the Copán archaeological site worth it? 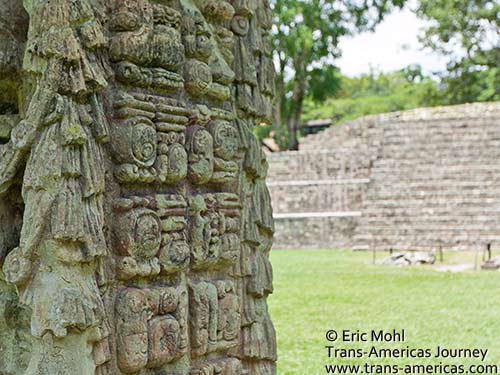 Carvings, like these glyphs, are of remarkable quality at the Copán archaeological site in Honduras.

It’s US$15 per person just to enter the Copán archaeological site. Another US$7 to enter the adjacent Sculpture Museum of Copán where the best stele, facades, and carved details are preserved and on display. Want to walk through a small tunnel inside a structure which was built around a temple which is now hidden inside it? That’s gonna cost you another US$12. All totaled up, that’s US$34 per person in entry fees.

Is Copán worth the fees?

Yes and no, but mostly yes. After all, they didn’t make the remains of the Mayan city of Copán a UNESCO World Heritage Site for nothing. 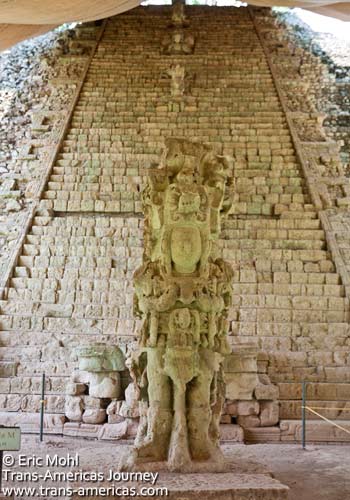 The  Hieroglyphic Stairway at Copán archaeological site in Honduras with stele M standing guard in front of it.

Copán has a wicked set of hieroglyphic stairs, each one carved with glyphs which are the graphic symbols of the Mayan alphabet. Archaeologists believe that the massive staircase told the story of the rulers of Copán. Unfortunately, when the experts unearthed the stairs they’d crumbled into a jumbled heap. The first 15 levels of steps have been  meticulously put back together more or less in readable order (presuming you know how to read Mayan glyphs), however, the many, many levels of steps above that are a nonsensical jumble of stones. 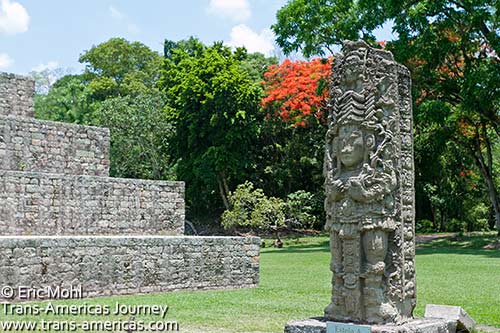 Stele A at the Copán archaeological site in Honduras.

Scarlet macaws were prized among the Mayans. A group of macaws lives at Copán and their carved images are found in the most important places like the ball court. Though the normal way to score points in the ubiquitous Mayan sport was by getting a ball through a stone hoop, at Copán points were scored by hitting big scarlet macaw heads carved out of stone with the ball. 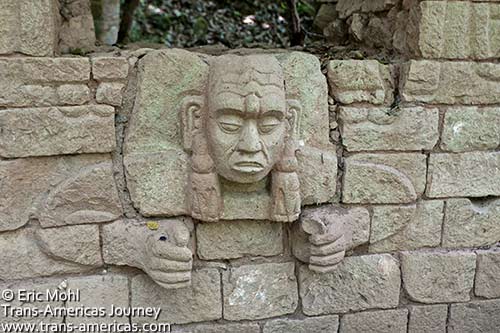 Figure on Structure 29 at the Copán archaeological site in Honduras.

Copán was also home to a ruler with one of the most delightful names in the Mundo Maya. Known as 18 Rabbit, he was revered for his epic building projects and support of the arts, especially sculpture. One of our favorite carved pieces depicted a dancing jaguar which reminded us a bit of the Grateful Dead dancing bear. 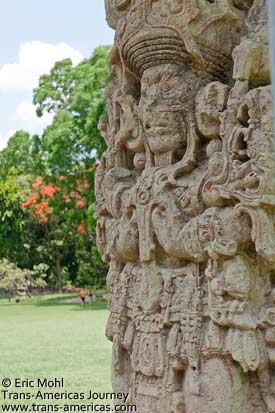 Stele B at the Copán archaeological site.

Speaking of sculpture,18 Rabbit had eight stele carved and put up at Copán during his 43 year reign. All of the stele at Copán are amazingly intricate. Even the back of the stone slabs, which are usually flattened and left bare, are carved at Copán. 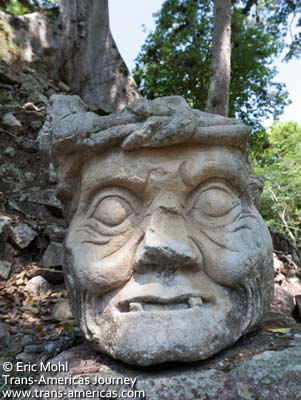 Copán ruler 18 Rabbit was a big patron of the arts, especially carving like this Pauahtun Head.

Spoiler alert: One thing we learned at Copán is that Mayans don’t call him 18 Rabbit. They call him 18 Agouti, but since a grand total of 174 tourists know what an agouti is (it’s essentially a large hamster that’s very common in the area) guides and guidebooks all call one of Copán most important residents 18 Rabbit. 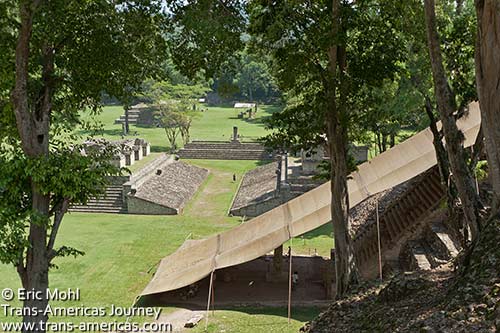 The ball court and the hieroglyphic stairway at the Copán archaeological site.

So, what’s not worth it at Copán?

The tunnel sounds great: An almost garishly red/pink/rust colored structure called the Rosalila is entombed inside what’s now known as Temple 16 which was built around the Rosalila. The only way to see the preserved remains of the Rosalila is to pay US$12 which gets you inside Temple 16, down a cramped set of stairs and through a tunnel which leads you to a plexiglass window that’s been put up around a corner of the Rosalila temple to protect it from visitors.

The problem is that the plexiglass is so scratched and fogged that you can barely see through it. What a disappointment. Best to gawk at the imposing reproduction of the Rosalila that’s been built in the sculpture museum next to the Copán site, complete with the decoration and color the experts believe the temple originally had. 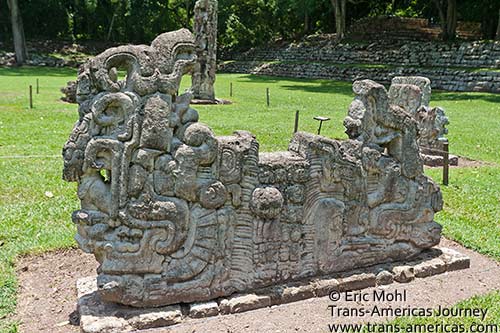 Altar G is a great example of the skill of the sculptors of Copán. 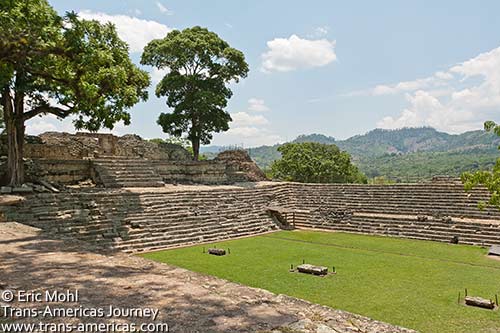 Temple 22 and the East Plaza at the Copán archaeological site in Honduras.

Use the savings to hire a guide

We’ve visited more than 100 archaeological sites and we rarely hire a guide but we did at Copán. We heard rumors about a guide at Copán named Tony who is supposedly in the Guinness Book of World Records for being able to do the Copán tour in five languages. We didn’t hire Tony but our guide, Julio Melendez, was informed, bilingual, passionate, and not in a hurry. 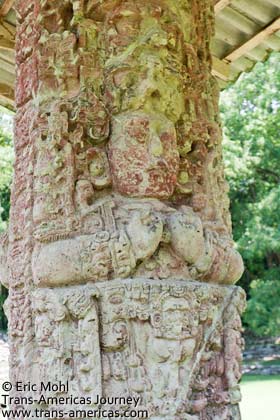 We wouldn’t have known half of the interesting things in this post if we’d toured the site on our own and we highly recommend taking the US$12 you didn’t spend to enter the disappointing tunnel and putting it toward a guide. The guides all charge a set price of US$25 no matter how many people are in your group. 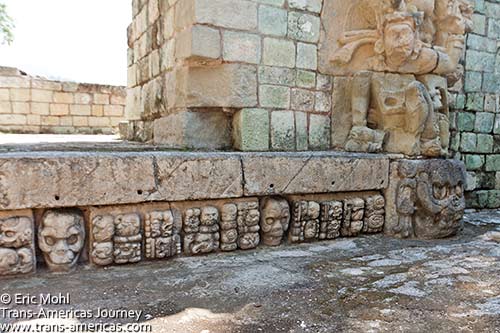 Carved skulls on Temple 22 at the Copán archaeological site in Honduras. 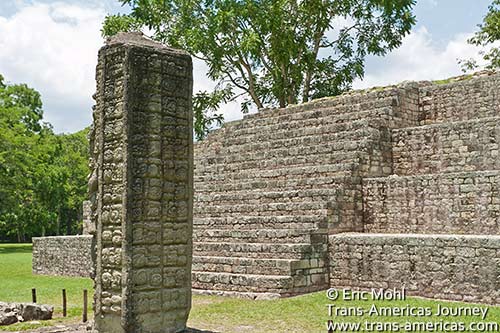 Even the back of the stele at Copán are carved.  Stele A (above) has a whole panel of glyphs on the back side.

One more way to save

There’s no need to hire a taxi or shared van to take you between the town of Copán Ruinas and the archaeological site. They’re less than a half a mile apart and there’s a perfectly pleasant and shady sidewalk that will take you from door to door. There are even a few stele to see along the way which you’d totally miss if you took a taxi or shared van.

And don’t miss Las Sepulturas, a neighboring archaeological site that was a residential area for the upper class of Copán, including 18 Rabbit and his mistresses. Entry to Las Sepulturas is included with your entry to Copán and the site is just a short walk beyond Copán. 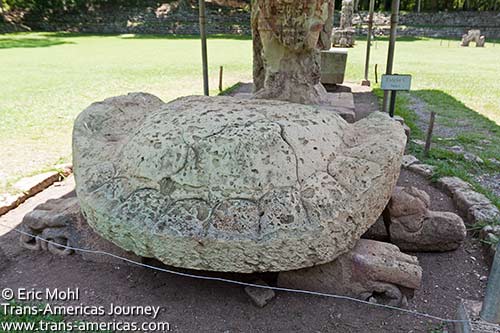 This turtle altar at the Copán archaeological site is one of the most unusual Mayan altars we’ve ever seen. 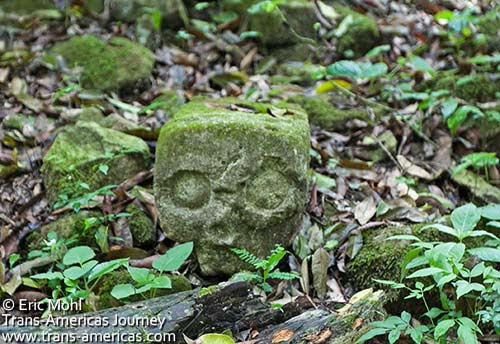 This carved skull was just sitting on the jungle floor at Copán, waiting for archaeologists to figure out where it belongs.