Though you can get on the  El Chepe Copper Canyon train in Chihuahua, Mexico we decided to drive our truck part of the way into the region between the towns of Creel and Cusárare where we got beautiful scenery, unexpected art, and the best blue corn tortillas we’ve ever had. 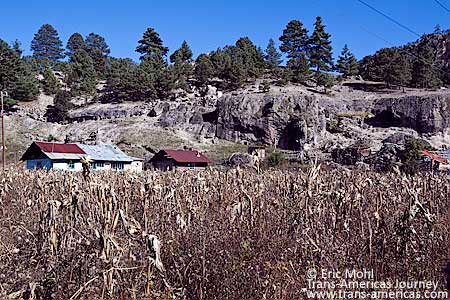 Cusárare, a Tarahumara village near Creel.

Going local in the Copper Canyon

Many visitors to Mexico’s famous Copper Canyon choose to stay in the town of Creel which has quite a few hotel and restaurant options and a kind of backpacker hangout vibe. We, however, were traveling Dave Hensleigh from Authentic Copper Canyon who was generously showing us the heart of this area, not just the main train stops and guide book listings. So we headed for something much more local in the nearby village of Cusárare.

Almost immediately upon leaving Creel and making the turn toward Cusárare (whose name means “place where eagles fly” in the local Tarahumara or Raramuri language) the scenery opened up into a high, flat, wide plateau full of rolling meadows, pine forests, boulders and lakes. If we hadn’t known we were in Mexico we might have thought we were cruising through Yosemite National Park in the US. A dozen miles later we reached the Tarahumara village of Cusárare which felt like a million miles away from Creel and we mean that in a good way.

Back in time in Cusárare

As we pulled off the pavement and drove into Cusárare it was like going back in time. Tiny hand-farmed fields of corn. Mud, stone, and beam cabins. Wandering livestock. Electricity only arrived a few years ago.

In Cusárare we spent the night at Cabanas Arollo Cusarare owned by Bertha Parra, but don’t go looking for a sign or anything. Just continue through town and go right at the fork near the church until you reach a footbridge that wobbles its way over a creek and leads to a small log cabin painted brilliant turquoise.

The draw at Bertha’s is not the basic rooms or the shared bathroom. It’s the chance to just be there with Bertha and her extended family for the chance to eat her wonderful cooking. We hope we never forget the rich taste and delicate texture of Bertha’s tortillas which she makes with 50% ground blue corn (which is grown in a field next to her house) and 50% wheat flour. 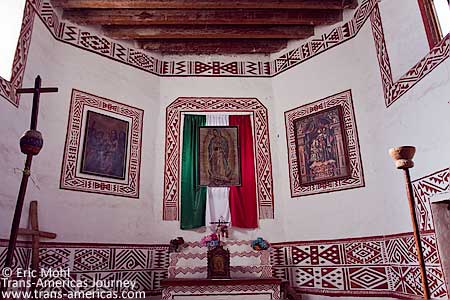 The Cusárare mission church, built in 1741, was restored to is original glory following the collapse of its bell tower in 1969.

To learn more about Cusárare and the Tarahumara who live there, check out Jeff Biggers book In the Sierra Madre. Though he changed the name of the village he lived in for a year, it’s clear from his description (how many Tarahumara villages near Creel have a bus that’s been converted into a cafe?) that Jeff was in Cusárare.

An earlier, and much more influential, resident of Cusárare was Father Luis G. Verplancken who is widely credited with gentle and conscientious Jesuit missionary work and with saving Cusárare’s mission and a treasure trove of religious art that was on the brink of destruction.

While we were in Chihuahua we met Wendy Suarez, a major force behind restoration and preservation efforts in the region, and she made it clear how much love and effort had gone into the Cusárare project, Nothing, however, prepared us for the beauty of the mission and the quality of the preserved art.

The church is gorgeously austere with a rough (and original) massive wood slab floor, no seats except a stone bench along the walls, crosses and even light fixtures made from tree branches, graphic traditional Tarahumara designs on the whitewashed walls, and a notched-log ladder up to the choir loft. It felt both spiritual and rustically artistic. 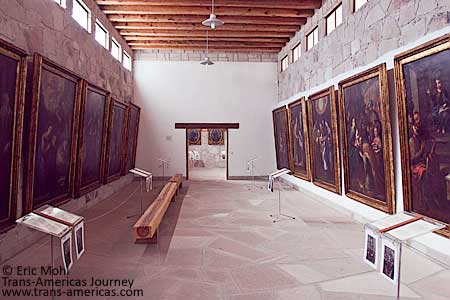 Religious paintings (including a series of 12 depicting the life of the Virgin Mary) are on display in the impressive Loyola Museum.

We found traditional definitions of art in the Loyola Museum right next to the church. This is where more than 40 oil paintings of saints and other religious icons now live in a protective environment after the paintings were rescued from the Cusárare mission church and other area missions by Father Verplancken. With the financial backing of foreign benefactors, the paintings were restored and the museum was built.

Artists include Mexican masters Juan Correa and his son Miguel Correa. The latter created a series of 12 5′ X 7′ paintings depicting the life of the Virgin Mary which William L. Merrill, PhD. and curator of anthropology at the Museum of Natural History Smithsonian Institute, reportedly called “a truly spectacular series of incomparable historical and artistic value.”

All in tiny little Cusárare. 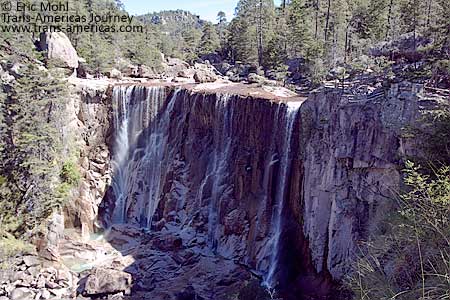 Hiking to the Cusárare Waterfall

The next day we hiked a couple of miles (4 km) to Cusárare Waterfall along a rolling wooded trail to the base of the 100 foot (30 meter) cascade. Though visitors to the falls a few years ago reported that the trail was full of litter, we found it to be mostly trash-free. There were even a number of trash cans along the way.

Near the trail head is another gem worth noting: The Copper Canyon Sierra Lodge (formerly called the Sierra Madre Hiking Lodge). Created by a guy named Skip McWilliams and run by Tarahumara staff, this long, low stretch of rooms with a communal porch has a kind of parkitechture meets Mexicana design aesthetic with tiled bathrooms, chairs and benches crafted out of gnarled and polished tree limbs, and trunks, wood stoves and fireplaces all in a spectacular setting on the bank of the creek with views of the hillside and caves on the other side.

What the Copper Canyon Lodge doesn’t have is electricity. And the price tag is a bit steep (for us) at US$100 per person per night including all meals. 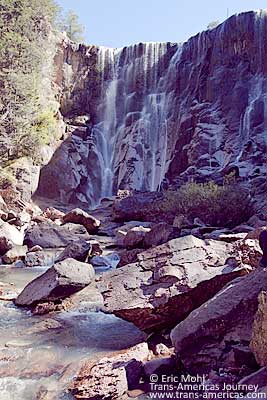 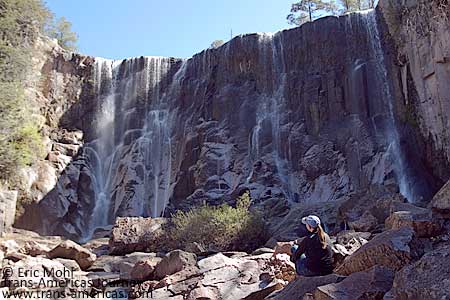 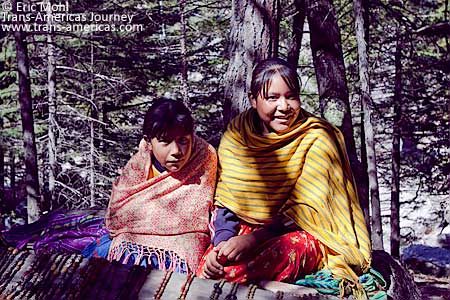 Tarahumara girls sell handmade baskets, sashes and other crafts near the Cusárare Waterfall.

After our waterfall hike we jumped in the truck and rushed out to the Valle de los Monjes (Valley of the Monks) rock formations in a wide rolling valley between Cusárare and Creel near the village of San Ignacio.

There are other areas of wacky rocks here including the Valle de Hungos (Valley of the Mushrooms) and Valle de las Ranas (Valley of the Frogs) but the monks are the most numerous and the most imposing and we were determined to catch them in sunset light.

But we had to find them first.

An initial sign that pointed us to the right was the last direction we got and the longer we drove over the increasingly lousy dirt road the more we began to worry that we were going the wrong way. Meanwhile, the sun was setting fast. Finally we saw another sign and arrived at The Monks which towered over us imposingly in the last of the day’s light.

The Tarahumara, by the way, call this area of rocks Bisabirachi which means Valley of the Erect Penises. Monks. Penises. You be the judge. 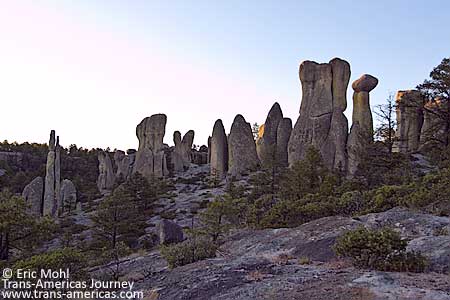 A small area between Creel and Cusárare is full of interesting rock formations including the Valle de los Monjes or Valley of the Monks, though the Tarahumara have a more anatomical name for them… 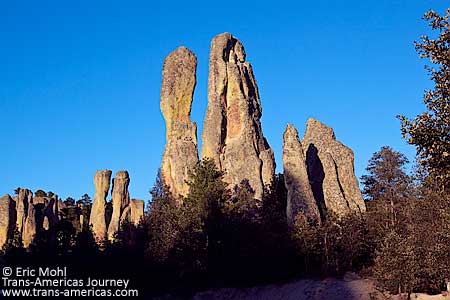 The Valle de los Monjes or Valley of the Monks. 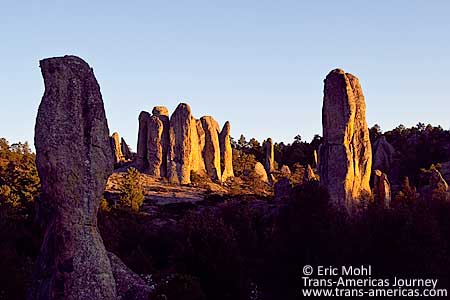 The Valle de los Monjes or Valley of the Monks.

The small Tarahumara village of San Ignacio sits amidst the rock formations and when we passed through on a Sunday it seemed like everyone in the village was at church or on their way to church. When we peeked in we finally got to see how the Tarahumara worship without the benefit of pews. 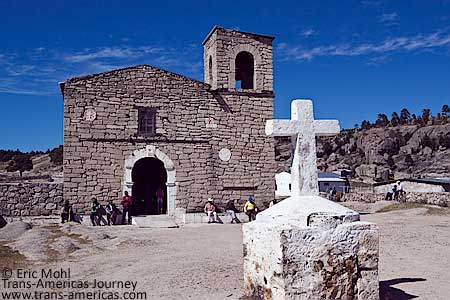 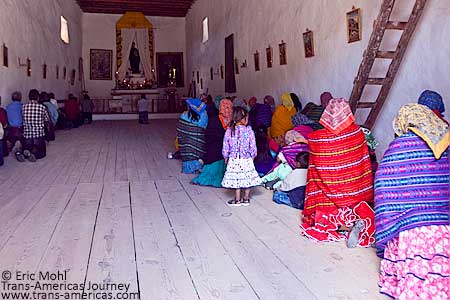 Sunday services in the San Ignacio Mission church are spent on the floor (men on one side, women on the other) since there are no seats or pews.

Another attraction between Creel and Cusárare is Lake Arareko which spills and sprawls and curls itself around rocks and forests, lending an even more park-like feel to the area. 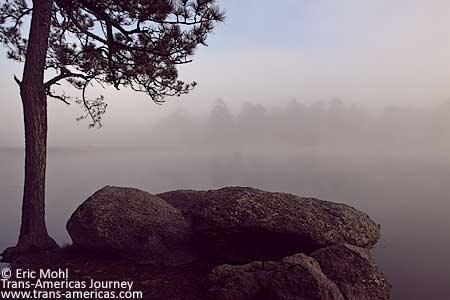 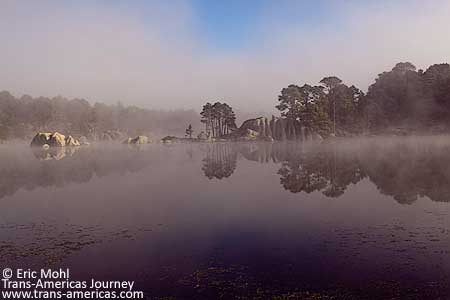 The last off the morning fog on Lake Arareko.