Basaseachic Falls is not inside the official boundaries of the Copper Canyon but it offers natural beauty, camping and hiking all its own. 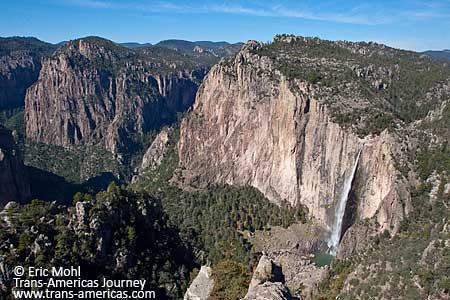 Basaseachic Falls and the Candemeña Canyon from high above on the rim trail.

Getting to Basaseachic Falls National Park

The 812 foot (247 meter) Basaseachic Falls (sometimes spelled Basaseachi) is the second highest waterfall in Mexico and/or the highest year-round waterfall in Mexico (depending on who you ask) and the 28th highest in the world. It’s also the center piece of the Basaseachic Falls National Park, and rightly so. This gorgeous unbroken ribbon of water made us think of Yosemite Falls, the seventh highest waterfall in the world, and was the perfect place to do some camping and hiking.

The El Chepe Copper Canyon train doesn’t go to Basaseachic Falls, so we drove there taking Highway 16 which was marked as a major highway and looked pretty straight in our Gia Roji Mexican road atlas. However, Highway 16 turned out to a narrow winding road full of 18 wheelers. At one point we watched in horror as the pickup truck in front of us nearly got wiped out by an oncoming big rig which had taken a corner way too wide.

Check out our video from Basaseachic Falls, below.

Around 5 pm we finally pulled off treacherous Highway 16, reached the town of Basaseachic safe and sound, and found our way to the Basaseachic Falls National Park. Happily, the park gates hadn’t been closed yet. We’re not exactly sure there are any actual park gates, come to think of it, and we never passed an entrance station either.

With the light fading we hurried to find a spot in the park’s campground. We were the only ones there. The campground is rocky but each of the vaguely demarcated sites has a spot that’s smooth and flat enough for a tent.  Some also have solid metal park benches bolted into place.

We picked a particularly grassy site on a bluff above a river and spent a good part of the night wondering who okay’d the budget to install a half dozen huge fancy metal street lamps throughout the campground instead of improving the mostly-not-working bathrooms. And where do they get a budget anyway if there’s no entrance station or fee collection? 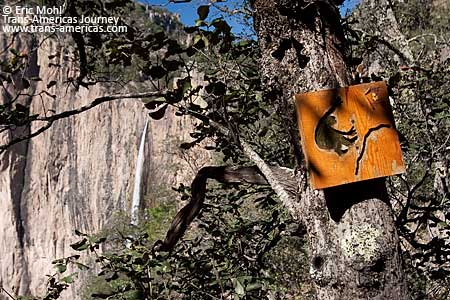 We’re not sure what this trail sign is supposed to be warning us about (falling gorillas?) but whatever it is, it doesn’t look good.

A bit of hard hiking

The next morning we hit the trail headed for the bottom of the waterfall and what we believed would be a stiff two hours or so down a couple thousand feet then back up again. We didn’t even bother with hiking boots or our Mountainsmith backpacks. We just grabbed a liter of water and started off in our sneakers.

We reached the top of the falls in less than 10 minutes but you can’t actually see the falls from there since the cascade is directly under the viewpoint, so we started down the trail into the canyon. Then we came to an unexpected fork in the trail.

Of course we took the fork and ended up hiking way back up to the opposite canyon rim until we were substantially higher than the top of the falls where we’d started. This delivered us to a group of three overlooks including San Lorenzo. They were spectacular vantage points on the full face of the waterfall but we’d unexpectedly added a couple of hours and a couple thousand feet of climbing and descending to what was supposed to be a moderate hike.

Weirdly, long sections of the trail on this side of the canyon had recently been widened and paved with large flat stones and concrete–most likely because you can just drive to this chain of overlooks and the tempting trails are meant to entice people to stroll from point to point. 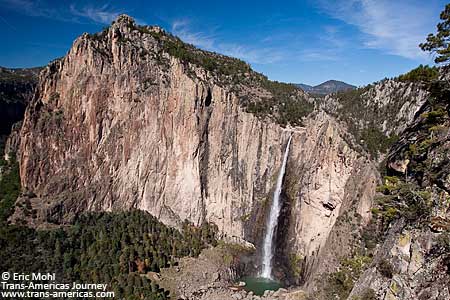 We, however, hiked on. After getting our fill of the hard-earned view, we descended back down to the fork in the trail, then continued on our original route to the bottom of the waterfall. This trail was steep and exposed and hot but spectacular. Heading back up proved to be a long hard slog (did we mention that we’d run out of water by this point?) made only vaguely easier by the promise of a sandwich once we got back to our campsite. 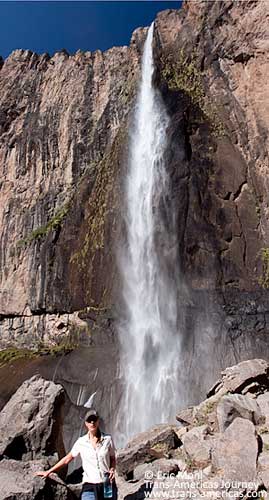 Karen cooling off in the refreshing spray at the bottom of Basaseachic Falls.