If you’re taking the El Chepe train and you don’t bother to get off and explore areas along the way then the Divisadero station is your only chance to look down (way down) into a major part of the Copper Canyon system. 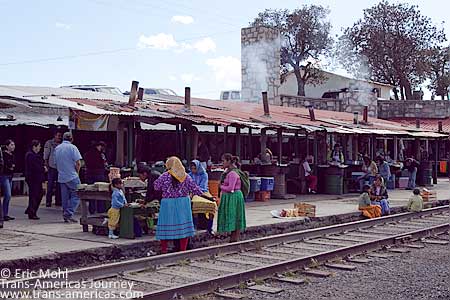 Women selling snacks, including fantastic gorditas, at the Divisadero station along the Copper Canyon train route in Mexico.

Gorditas and gorgeous views in the Copper Canyon

The Copper Canyon train stops at the Divisadero station for 15 minutes which is just long  enough for passengers to enjoy the view from a vantage point right across the street from the station. 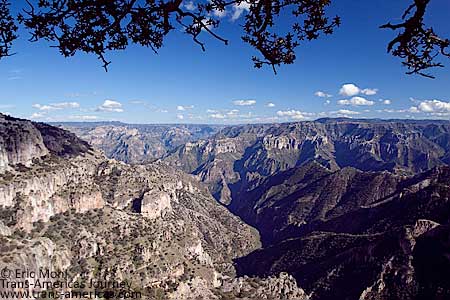 The view of the Urique Canyon from the Divisadero viewpoint which is right across from the train station. 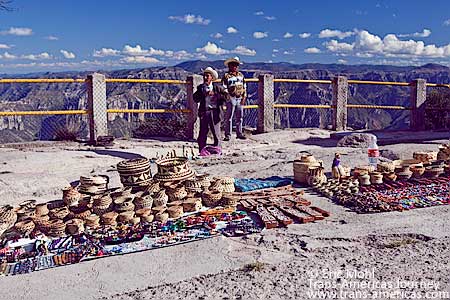 Shop with a view! Tarahumara craft stands at the Divisadero station lookout in the Copper Canyon.

It’s also long enough to grab some of the best gorditas (lightly fried thick corn cakes stuffed with combinations of meat, cheese, beans, and vegetables) in Mexico along with your gorgeous views. 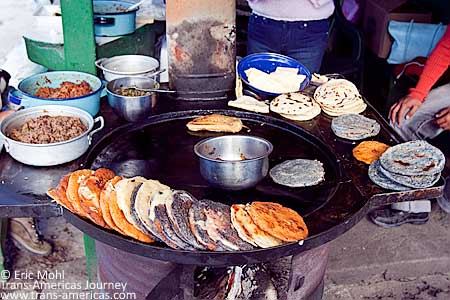 Some of the best gorditas we’ve had were at the Divisadero station in the Copper Canyon.

We grabbed some gorditas and headed into the neighboring town of Areponápuchi for more canyon exploration. Areponápuchi is a funny place. On the one hand it feels like a small town. Skinny dogs hang out in front of the tiny tienda. Dented trucks kick up dust even on the pavement. Laundry is hung out to dry on every available surface. 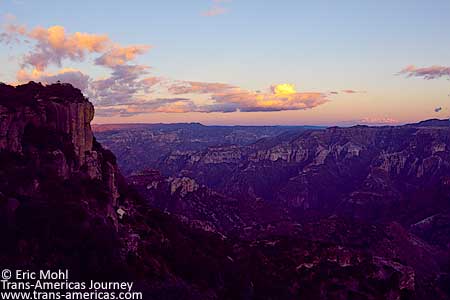 Sunset in the Urique Canyon from the Mirador Hotel in Areponápuchi.

Panorama of the Urique Canyon from Areponápuchi. (click for full size panorama) 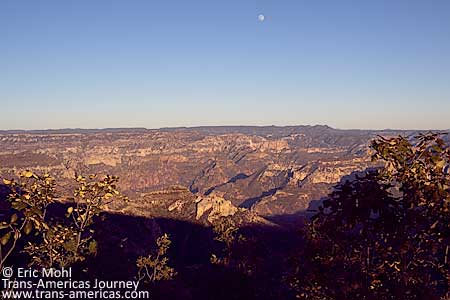 An almost-full moon rises over the Urique Canyon as seen from Areponápuchi.

Off the beaten path in the Oteviachi Canyon

The next day we met up with Gustavo Lozano, a rare combination of expertise, passion, humor, and an excellent grasp on English. Oh, and he doesn’t conduct his tours in an obnoxious Hummer like they do from the Hotel Mirador. 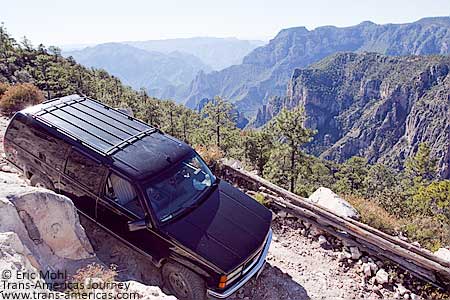 There are some very steep, very windy and very narrow roads around the Copper Canyon. Some hairpins were so tight that Gus had to back down sections in order to make the next turn.

Gus took us and our companion, Dave Hensleigh from Authentic Copper Canyon (who gets more and more excited as our expedition gets further and further off the beaten path), on a day trip out to a section of the Copper Canyon, just off the Urique Canyon, that few visitors ever see.

It happened like this. The previous morning at dinner Gus showed up and asked if we’d ever been to the Oteviachi Canyon which is one of the six canyons in the Copper Canyon system. We all shook our heads and said nope. He said he’d pick us up at nine am the next morning. 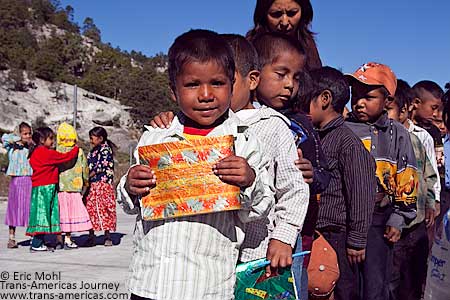 Children at a Tarahumara school in San Alonso.

None of us, except Gus, really knew where we were headed and that was just fine. We drove through San Rafael but quickly turned off the pavement onto a dirt road that lead to a Tarahumara village called San Alonso. Gus had business here. Namely an SUV full of donated books, toothbrushes, and athletic equipment for the school children. 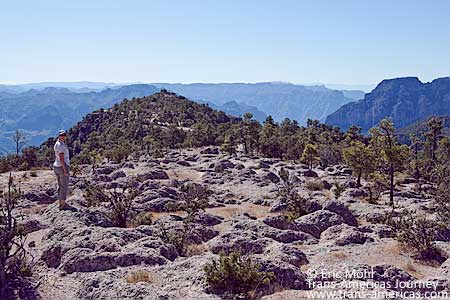 Odd rock formations, possibly lava, atop the rim of the Urique Canyon near Oteviachi.

San Alonso was the last village we saw. From there the terrain became pristine, just trees (including 18 kinds of oak according to Gus), canyons, circling buzzards, wacky rock formations, and the odd, faint footpath to mark the passing of human feet. 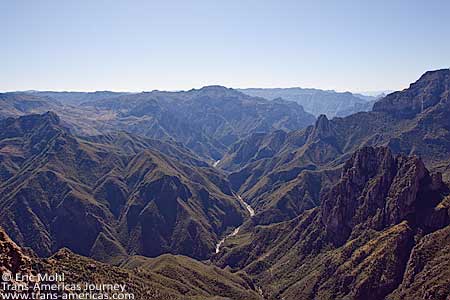 The Urique Canyon from Oteviachi.

There is a road, of sorts, through this area and that’s because a spectacular lodge was built out here. It’s called the Hostal Oteviachi and Gus used to manage it. These days it’s mostly empty and that’s a real shame since the place has a spectacular location that rivals the Hotel Mirador right on the canyon’s edge.

Panorama of the Urique Canyon near Oteviachi. That’s Gus on the left. (click for full size panorama) 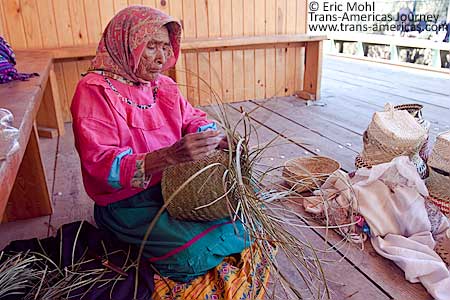 The Tarahumara are talented and creative basket weavers. This Tarahumara woman rarely looked at what she was doing while her hands moved with practiced swiftness. 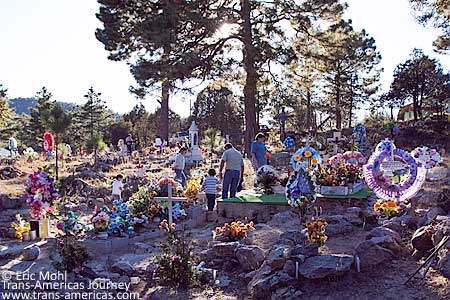 Areponápuchi’s Dia de los Muertos (Day of the Dead) celebrations were low key but the small cemetery was still filled with color as locals paid their respects to dead loved ones.