Epic Drives: Creel to El Fuerte Through the Copper Canyon in Mexico

We’d taken the El Chepe Copper Canyon train. We’d hiked deep into the Copper Canon. We’d even conquered two of the area’s most dramatic roads to reach the towns of Batopilas and Urique. All that was left was to figure out a road trip route that would allow us to drive from Creel to El Fuerte through the Copper Canyon in Mexico. 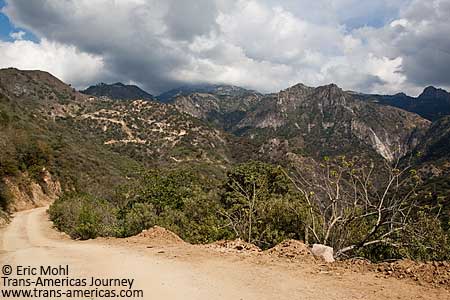 The “roads” that traverse the Copper Canyon region of the Sierra Madre mountains are simple dirt tracks. You can see one switch-backing up, down, over and around the mountains in the background.

Many locals had assured us that it was possible to drive across the Copper Canyon, even though the region looked completely roadless on every map we looked at. We were also assured that the previous rainy season hadn’t done too much damage to the area’s network of dirt roads. Feeling encouraged, we left Creel bound for Cerocahui and the first leg of our intra-canyon Copper Canyon road trip.

We left the pavement behind in San Rafael, not long after leaving Creel. Many of the simple dirt roads that eventually took us all the way to El Fuerte were built to give access to the mines in the region and most were not on the detailed maps in our Gia Roji road atlas. The locals and the mine employees all know exactly where they’re going so no one ever bothered putting up any signs either. 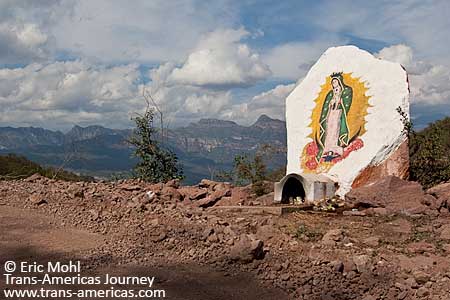 The ever-present Virgin of Guadalupe watches over the roads and drivers throughout the mountains.

The route that first day was pretty straightforward, however, and we found our way to Cerocahui via surprisingly smooth dirt roads that followed lazy streams and passed small fields of corn and beans.

After passing Cuiteco the scenery got particularly gorgeous as we drove through pine and oak forests. We were almost sorry when we reached our final destination but we cheered up knowing that we would have the chance to see Alberto and Francia at Hotel Centro Jade in Cerocahui for the night. 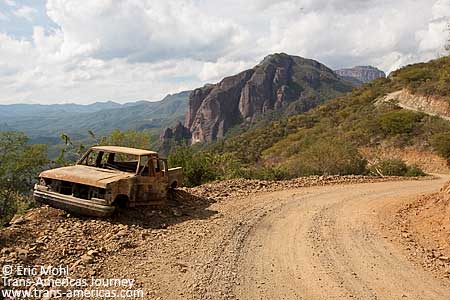 Unlike this doomed truck, we were heading out of the Sierra Madre mountains down to the Rio Fuerte.

The second day of our Copper Canyon road trip got a bit more challenging. The road itself remained in remarkably good shape (though there was still no sign of signs). However, the roads became so narrow in places and the mines create so much big truck traffic that it was slow going.

As we crossed over the Rio Fuerte we thought we were done with the mountains but there were still more ups and downs ahead of us before we reached El Fuerte. (Click image for full-size panorama)

It doesn’t help that the Copper Canyon is a network of different canyons, not just one big canyon, which makes it necessary to drive way up to peaks and passes, then way back down to riverbeds over and over again to get across different canyons. We averaged less than 15 mph (24 kmph). 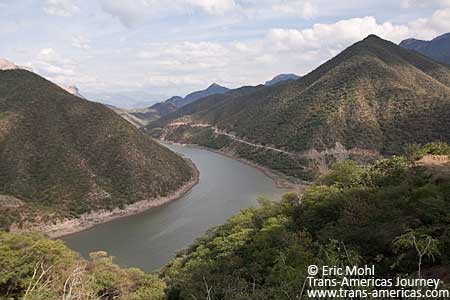 That faint ribbon of road visible to the right o the bank above the Rio Fuerte is what took us out of the Copper Canyon region toward El Fuerte. 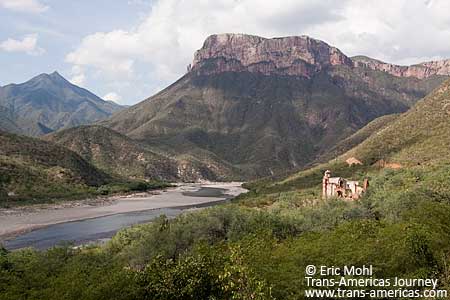 The road followed the Rio Fuerte for quite a while but we passed very few villages. This one was dominated by the picturesque ruins of an old church.

Despite the heat shock, El Fuerte charmed us. It’s part of Mexico’s elite Pueblos Magicos, honored for its traditional architecture and cultural significance. 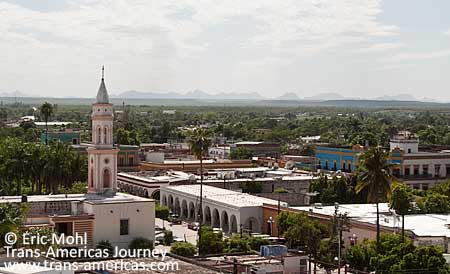 The colonial town of El Fuerte is one of Mexico’s Pueblos Magicos. 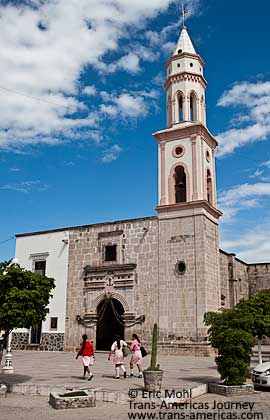 The church on the plaza in El Fuerte.

All of El Fuerte’s central buildings were freshly painted and very well kept. When we were in El Fuerte it seemed like half the population was out scraping old paint off the iron benches and metalwork in the plaza as part of one big proud community beautification project. Food stalls in the market served a mean birria and delicious tacos too. 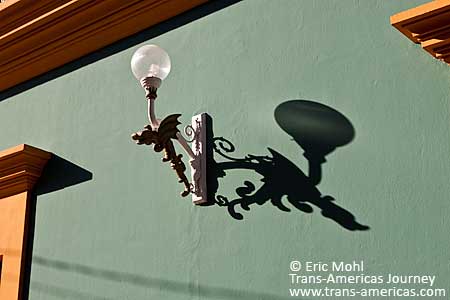 For reasons we’re still puzzling over almost all of the lamp fixtures on the outside of buildings in El Fuerte had this same gargoyle design.

El Fuerte also has a fancy Balderama Hotel which has a huge statue of Zoro who, according to a half-hearted local legend, came from El Fuerte. However, we agree with Lonely Planet on this one: a better bet is to check into the Torres Del Fuerte Hotel.

We were greeted by Jesus, who was actually born in what is now room #2 in this eclectically-restored hacienda just a couple of blocks off the plaza. Jesus is dapper and charming and, along with his wife and son, brought his family’s former home back from the brink of ruin and opened the hotel. 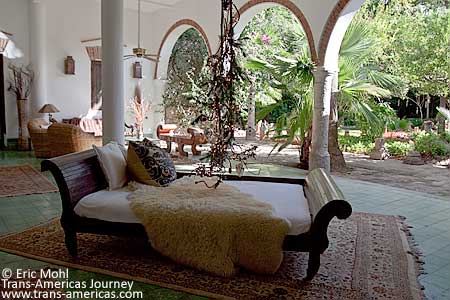 The sexy and eclectic open-air lobby of the Torres Del Fuerte Hotel.

Parts of the property are more than 350 years old and by the time Jesus started the hotel project it was in pretty bad shape and most of the original furniture and fixtures were beyond help. Out of necessity, Jesus has amassed a collection of period replacements, from antique wood doors and cast-iron railings to furniture and tile work, from around Mexico and the US. Jesus’ wife then placed each piece, adding modern touches (sinks carved from solid stone, massive candles, and plushly upholstered couches) and a little bit of whimsy (bright colors and a leopard-print rug).

Add in a sprawling lush garden, an on-site bar, and restaurant (that’s a shocking bargain) and we were tempted to spend an extra day in El Fuerte. 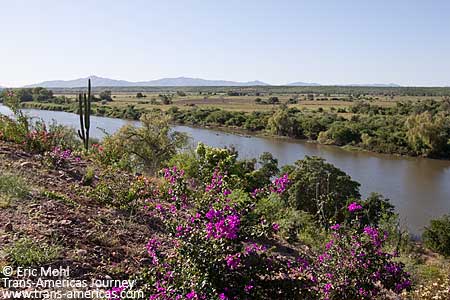 El Fuerte is also known as a haven for more than 60 species of bird and for its bass fishing. We don’t fish but we did take a morning ride in a rowboat down the Rio Fuerte with local guide Chico who was quick to point out osprey, herons, and kara karas. 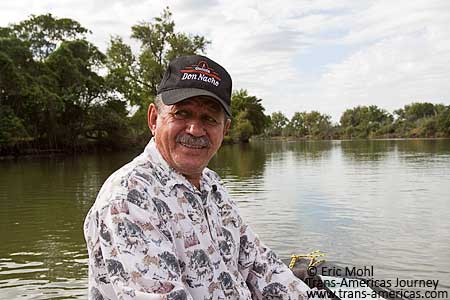 Chico, a guide in El Fuerte, took us on a bird watching boat trip on the Rio Fuerte.

We stopped along the way for a quick stroll to see a collection of rocks covered in petroglyphs. Once located on the top of the highest point in the area, an earthquake knocked the rocks down and they now lie in jumbled piles not far above the riverbank. 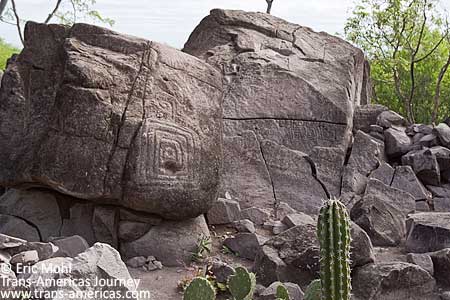 We were also thrilled when Chico’s son, Sergio, took us on a tour of the Rancho Chinobampo organic farm where he oversees the organic fish project. The farm also grows mangos, basil (some of which ends up in Whole Foods), medicinal herbs, and lots of experimental plots of staples like jalapeños and cucumbers.

Rancho Chinobampo is one of just a handful of officially certified organic farms in Mexico and it’s taken a unique approach even among that rarified group. The family that owns the farm also owns successful zeolite mines and they’ve chosen to combine the two ventures by using zeolite (a natural substance commonly used in gardening but rarely on this scale) to supplement or even replace soil. Bat guano, harvested by hand, is mixed with it for nutrients.  They spray an all-natural garlic mixture instead of pesticide. They also get help from the University of Havana. 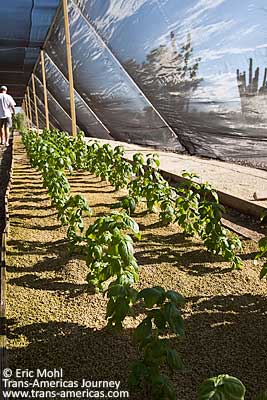 Coming soon to a Whole Foods near you! Basil growing in a mixture of zeolite and bat guano at Rancho Chinobampo organic farm in El Fuerte, Mexico.